MEGHAN Markle is due to give birth any day and royal experts reckon Prince Harry's already got a custom-made piece of jewellery picked out for the first-time mum.

'Push presents' have become a tradition in the royal family in recent years – with Kate Middleton being showered in presents, including a circular inscribed pendant and £3,500 pair of designer earrings, after each of her births. 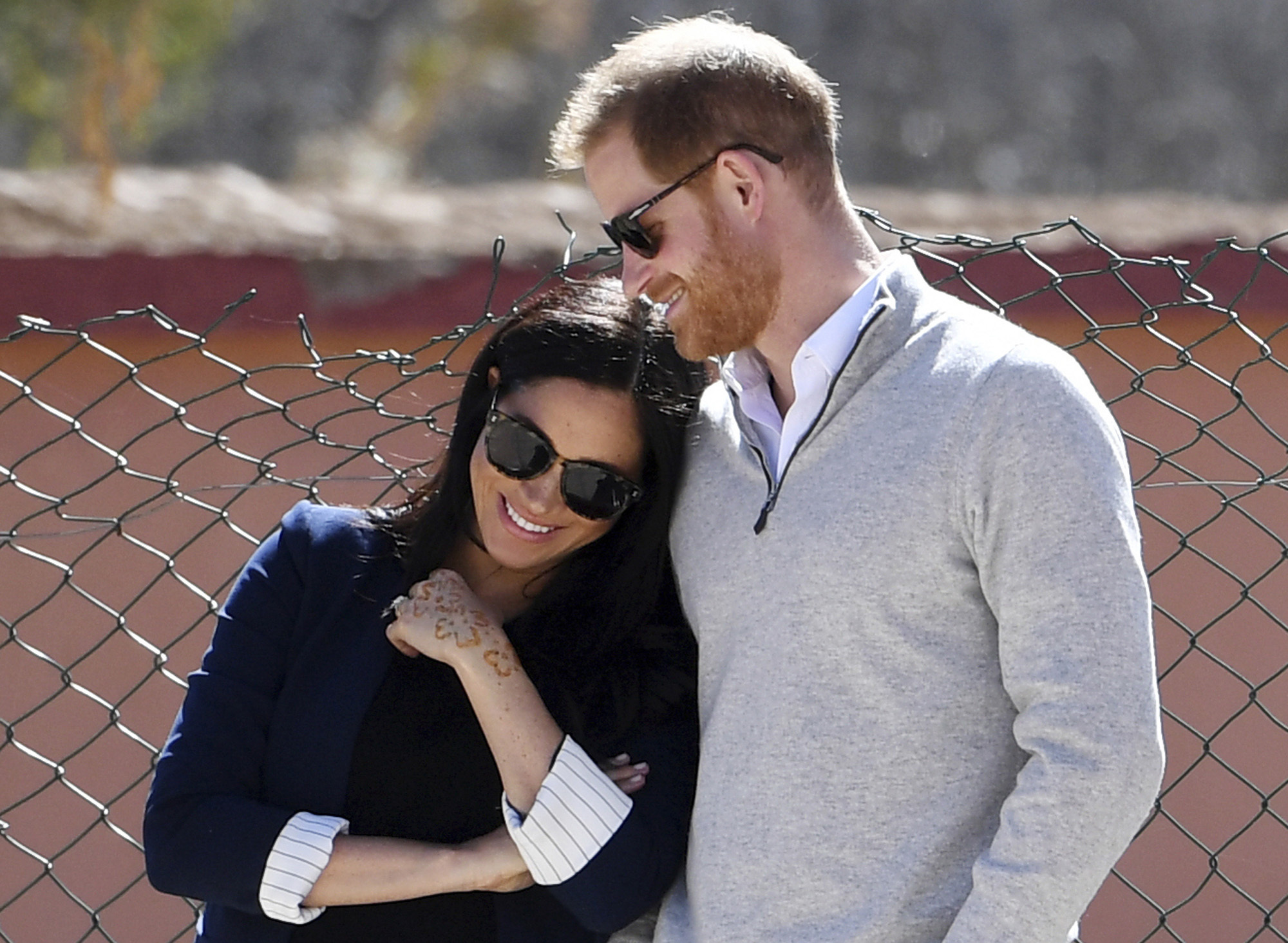 This may seem a bit extravagant for us ordinary Brits, but these ordinary mums were also lavished with pricey presents.

From a diamond-encrusted watch to two antique rings, and even a pair of Louboutins, three mums reveal how their push presents helped them get their sparkle back.

Mum-of-three Aoife Murphy, 38, from Manchester, was bought a £650 pair of Louboutins after the birth of her eldest child Ellen, four. 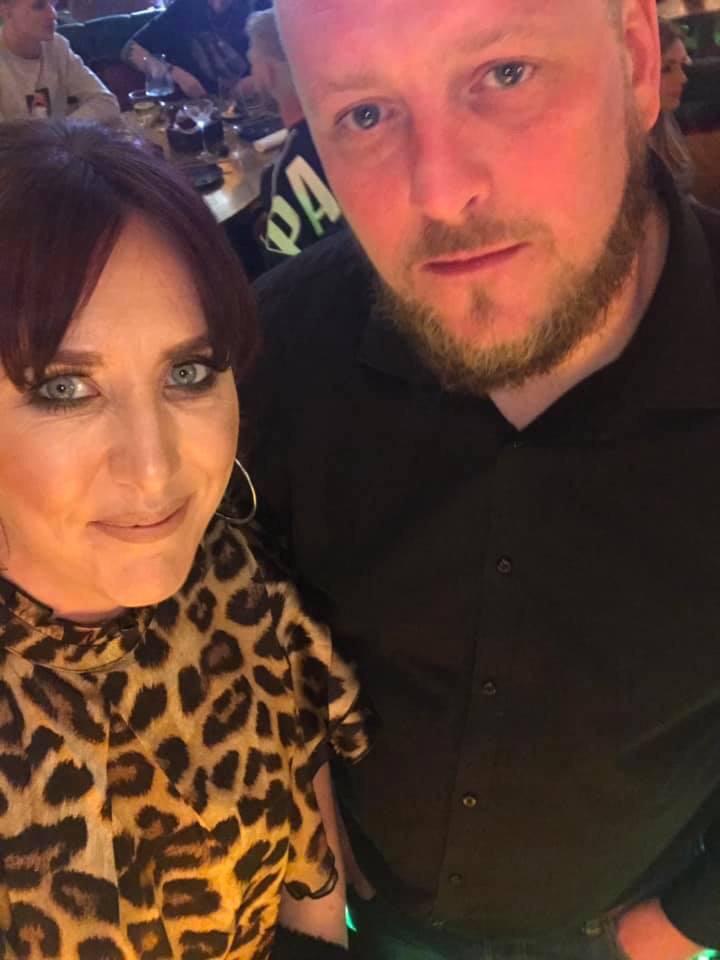 I’ve always wanted a pair of Louboutins, but I never had the money to buy them.

The push present was my idea, I brought it up with my husband Paul, 39, a plumber, when I was pregnant with our first child – and told him I wanted something extravagant.

He was a bit shocked at first, but he soon came round to the idea – he didn’t protest for too long.

Whenever I told people I was getting a push present they always said I shouldn’t be getting anything just for giving birth, but I was determined.

Pregnancy is long and hard, and I really think you deserve something fabulous at the end of it. 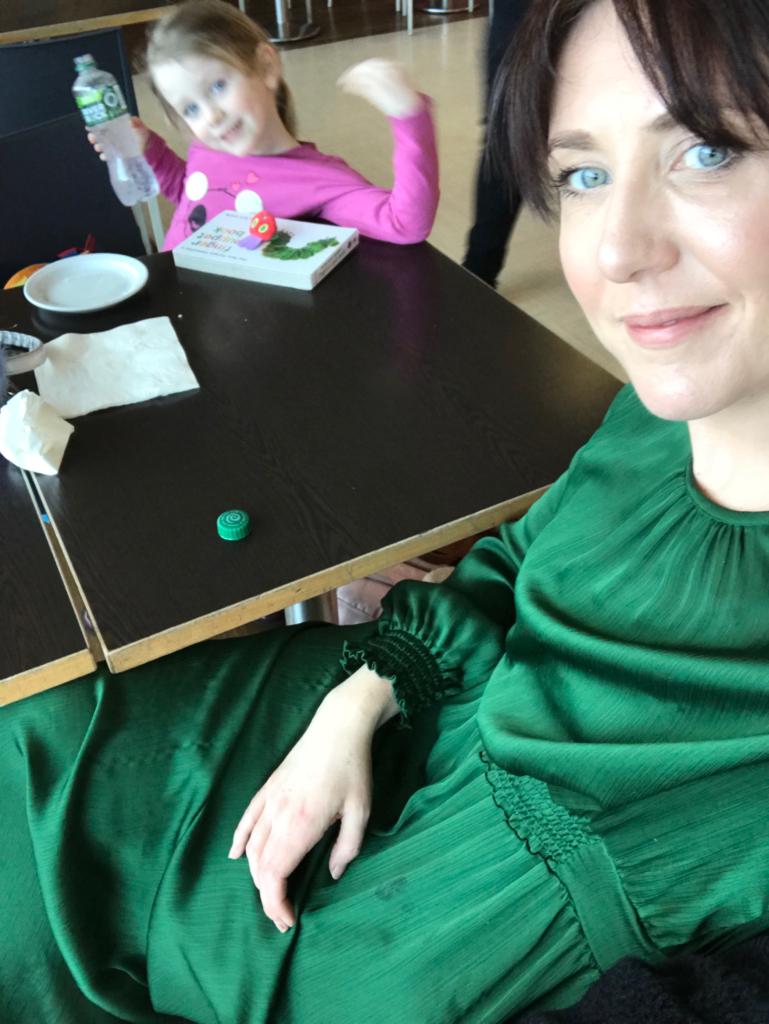 Aoife Murphy, 38, was bought a £650 pair of Louboutins after the birth of her daughter Ellen, four 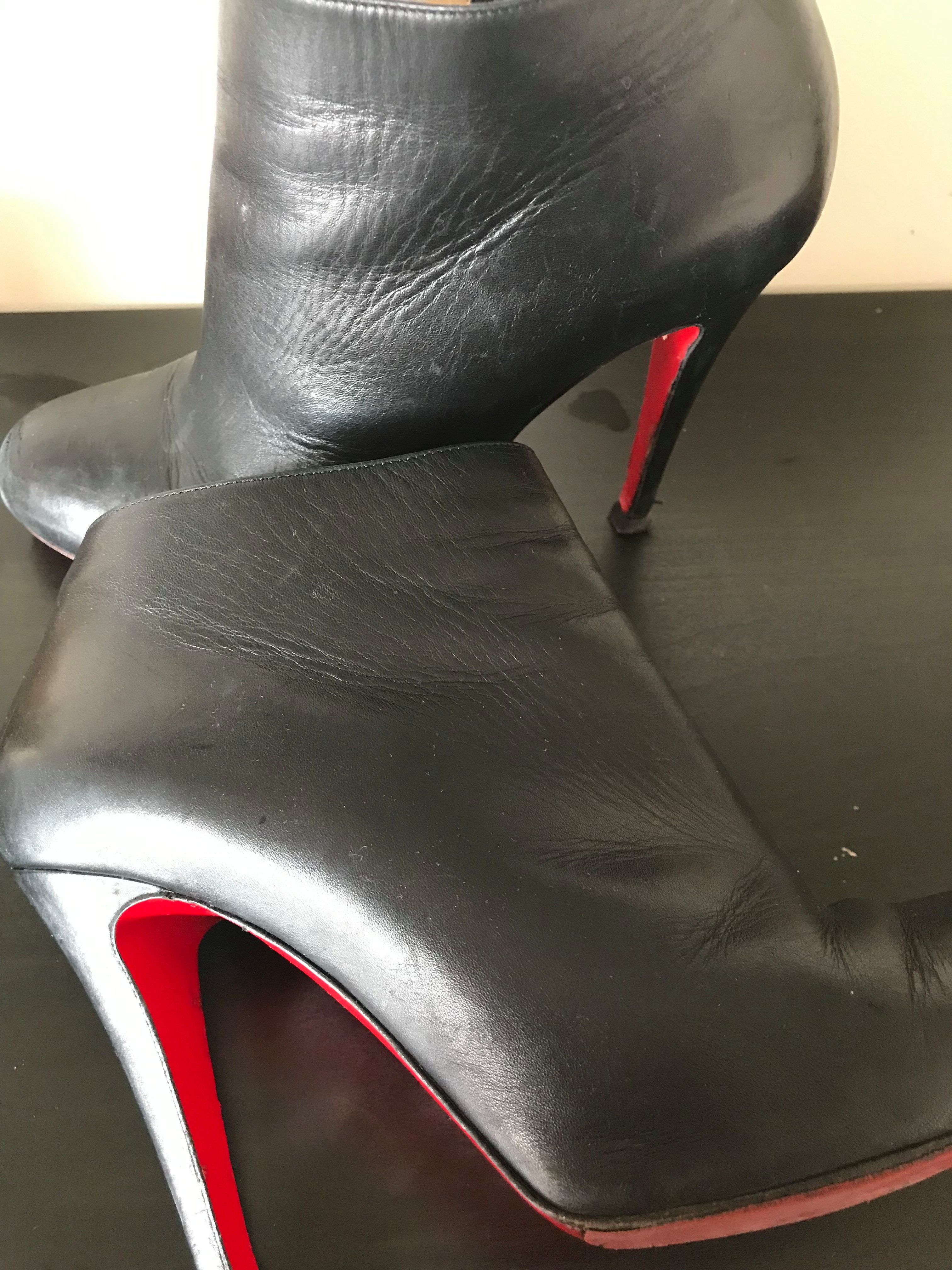 We went to buy my Louboutins when Ellen, now four, was a couple of weeks old, from Harvey Nichols Manchester.

Because they’re black boots, it’s not immediately obvious what they are, but I know.

I wanted something that would last me a long time. I still wear them every time I go on a night out, although that isn’t very often anymore now I've got three kids.

The first time I wore them out was for lunch with friends.

It was difficult to walk in them just after giving birth, because they’re so high, but they instantly made me feel special. 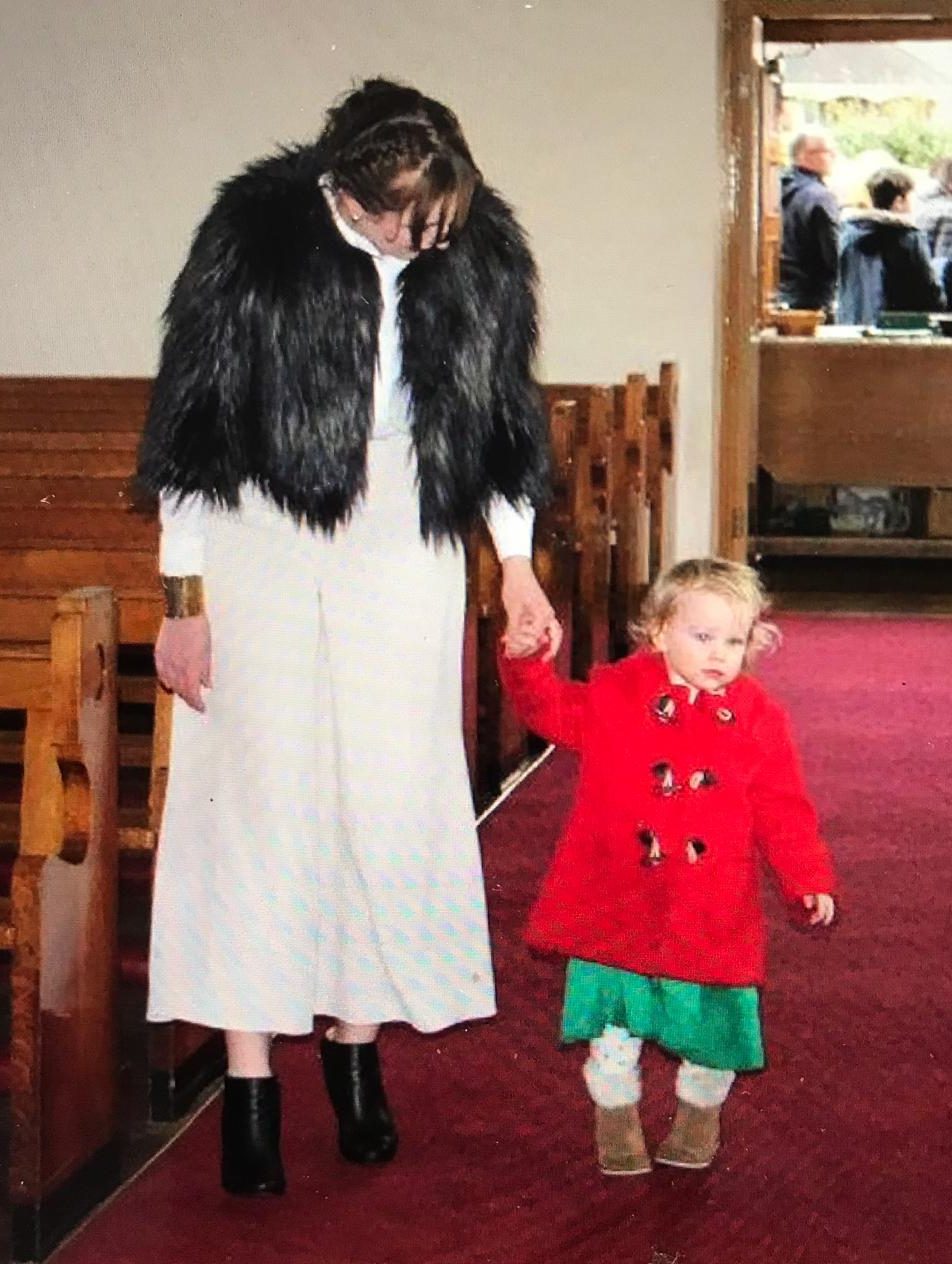 It’s a lot more than I’d normally spend on shoes, especially when you’ve just had a child, you should really be reining it in.

Ellen’s birth was the hardest out of the three, I had home births with my sons Eoghan, three, and Conor, one.

Like Meghan and Harry, I did hypnobirthing, and with Ellen I wanted everything to be as natural as possible – but it's not always like that in hospital.

It’s a lot more than I’d normally spend on shoes, especially when you’ve just had a child, you should really be reining it in

I ended up with a horrible ventouse delivery (forceps), which led to stitches, infection and problems breastfeeding.

I didn’t have push presents with the other two, I think I might have been pushing it to get three pairs of designer shoes.

And once you have three kids you can’t really afford to treat yourself.

Mum-of-one Lucy Griffiths, 42,  from London, got a diamond-encrusted watch costing £1,550 after the birth of her eldest son Ben, four. 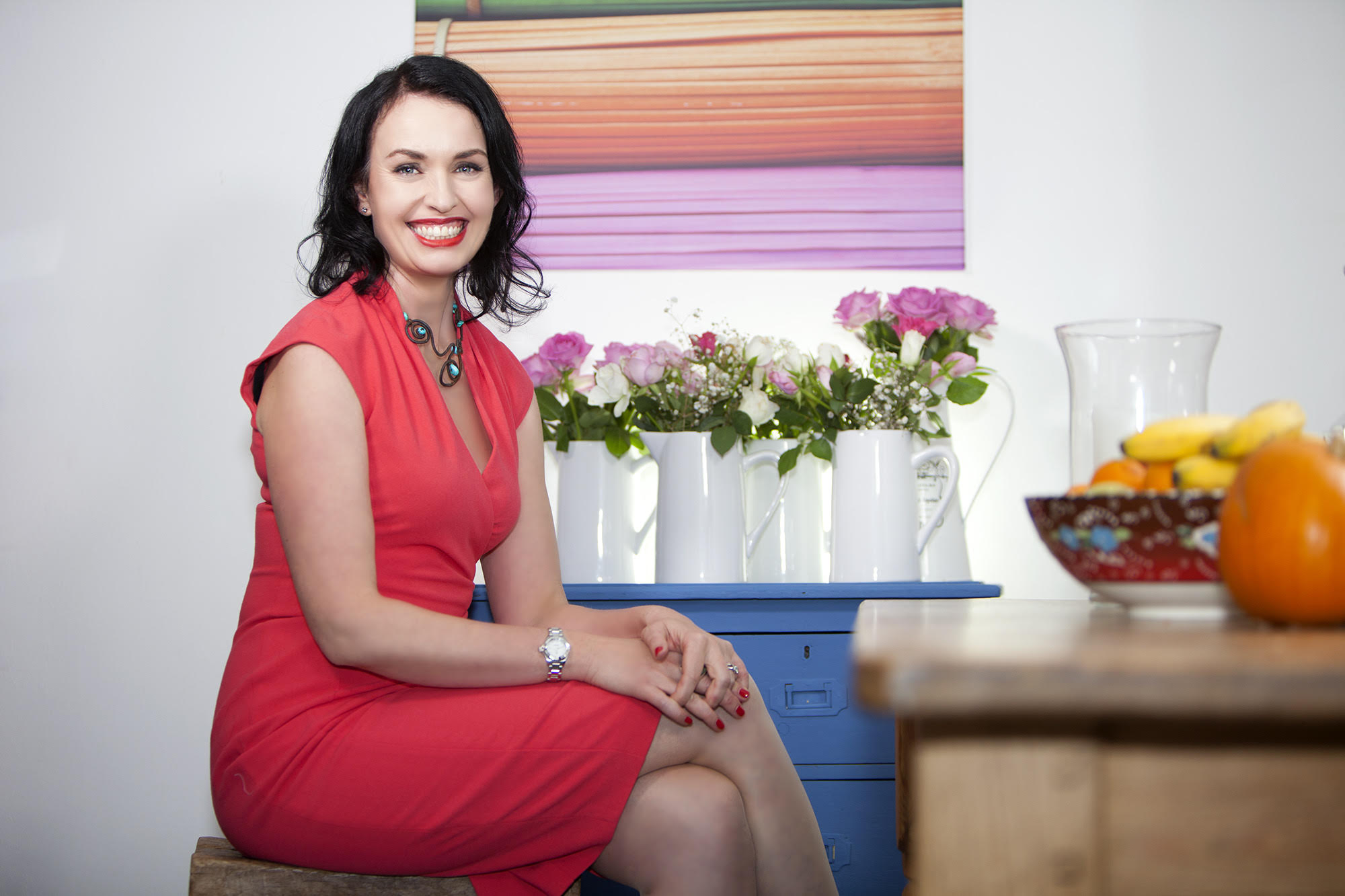 I’m not sure if it was a push present, or a pity present. Giving birth was bloody awful.

Like Meghan and Harry, we planned to use hypnobirthing, and a water birth, but things went awry. 40 hours of labour and counting, our little boy Ben was born.

Our gorgeous little baby was born with pneumothorax, or a collapsed lung.

I also had Strep B, and wasn’t told, so I’d passed it on to him and it meant there was a strong possibility our poorly boy could also develop meningitis.

Our little bundle of joy was in intensive care, and therefore we spent an extra week in hospital until he sorted himself out.

Luckily, he self-corrected, and he has gone on to be a happy, strong boy. 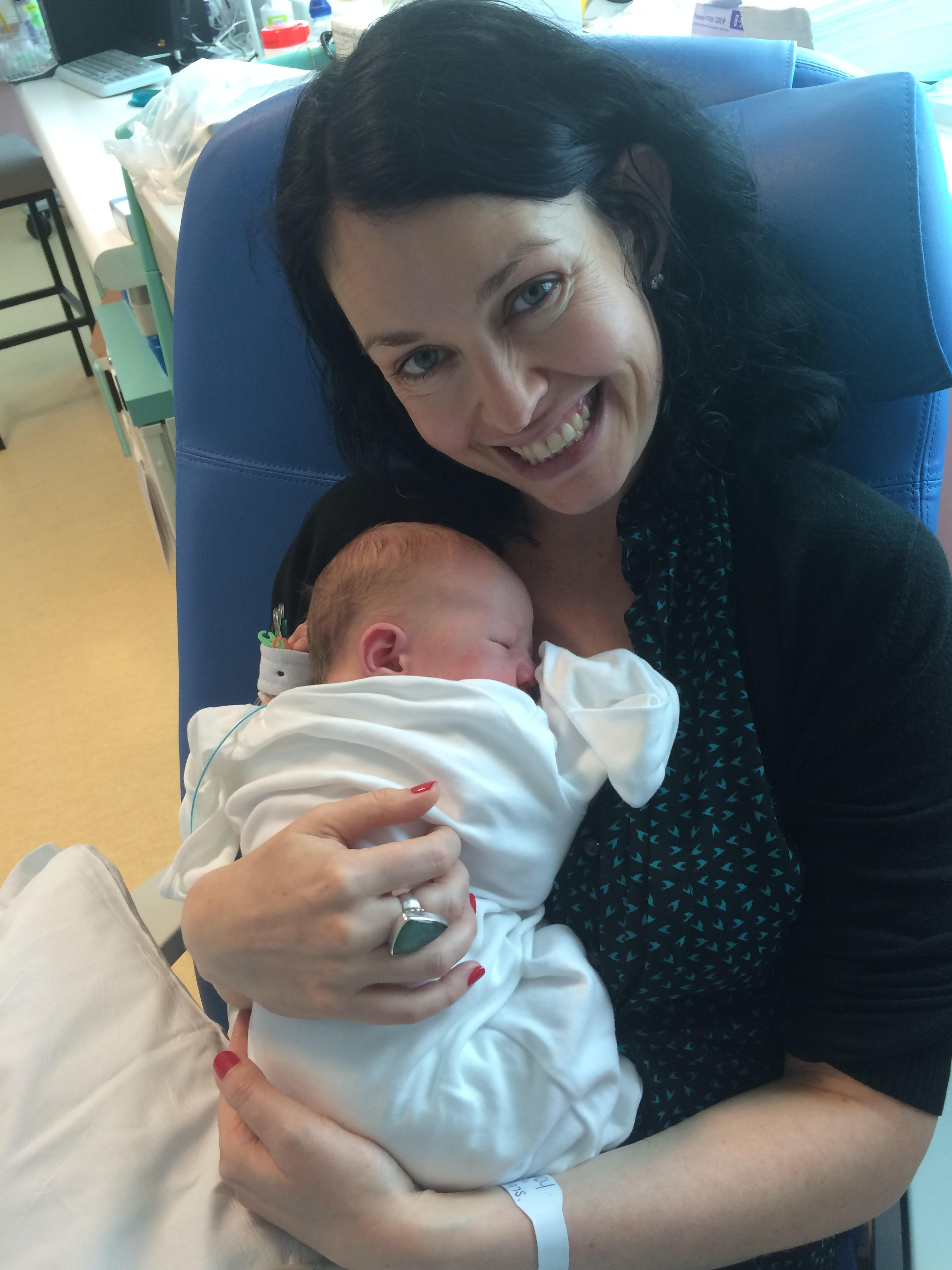 I tore in 3 places, and had to be stitched up, which was waaaaaaaaay more painful than labour. I stood up the morning after giving birth, and wet myself.

That was the starting point of my incontinence issues that meant I often had no control over my bladder.

Things were so bad that walking down a ramp or hill meant I’d uncontrollably pee myself all over the hospital floor.

Because the ICU and the maternity suites were at utterly different ends of the hospital, I found myself spending a lot of time walking up and down the corridors, which was really problematic and embarrassing when you keep wetting yourself.

Ben was born with a collapsed lung and I was on my own a lot in hospital. I think Tim was trying to help me get my sparkle back

I didn’t really have any family around, and so it was up to me to just keep going.

Tim, my lovely husband had just started a new job as a contractor, and so he couldn’t get much time off.

I was on my own a lot in hospital. The Neo-Natal care staff in ICU were fantastic, but it definitely wasn’t the bonding time that I imagined it would be with my son and it triggered some post-natal depression.

I think Tim was trying to help me get my sparkle back. He went out and bought me a beautiful TAG Heuer diamond watch. Just my perfect present – waterproof, and sparkly!

At the time, I thought it would mean it was pretty enough to be a thoughtful gift, and practical enough to wear for bath times with my baby, and also wear in my job as a TV reporter.

But my incontinence was so bad, I couldn’t really return to work, so I set up my own video training business. 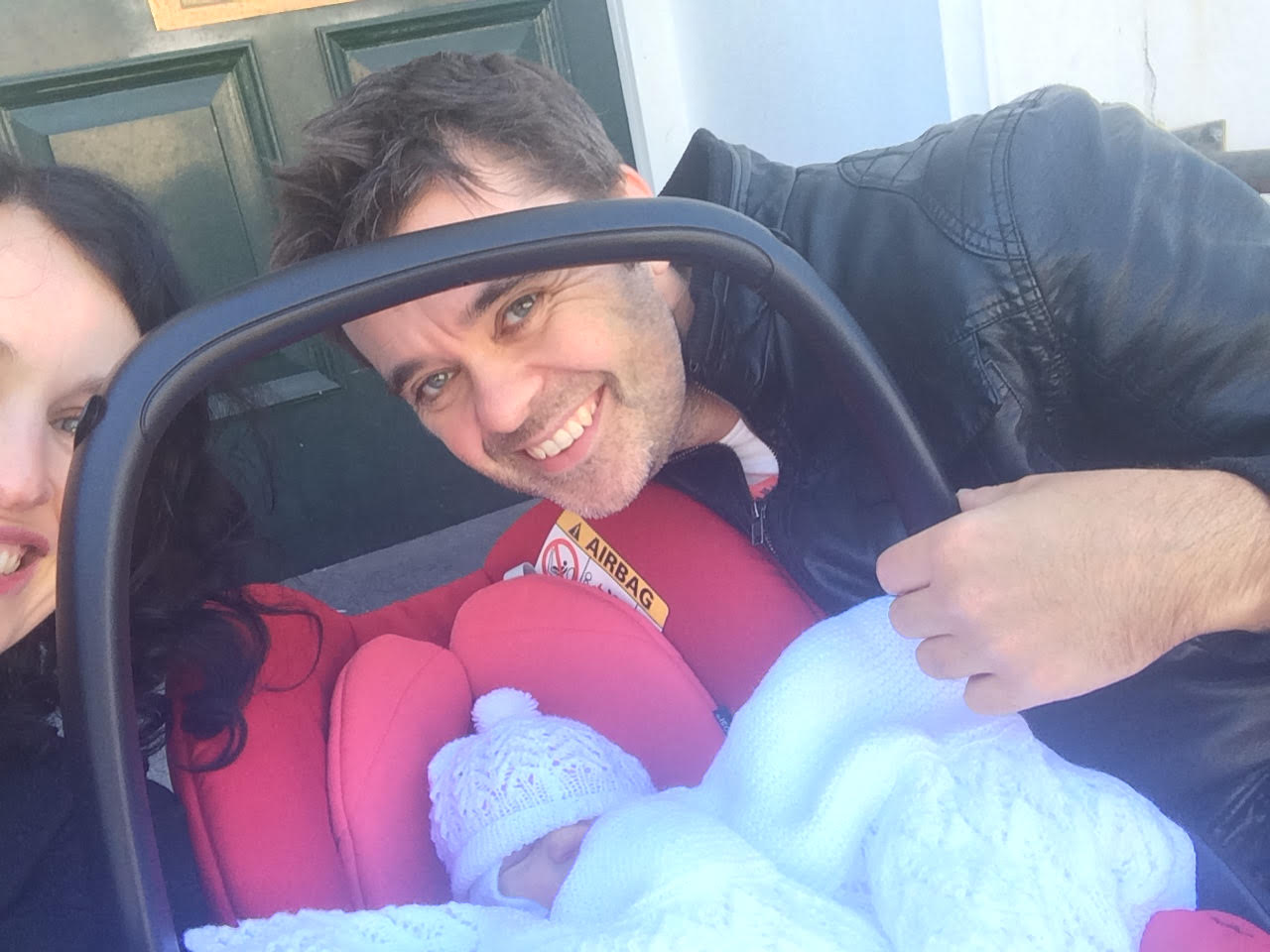 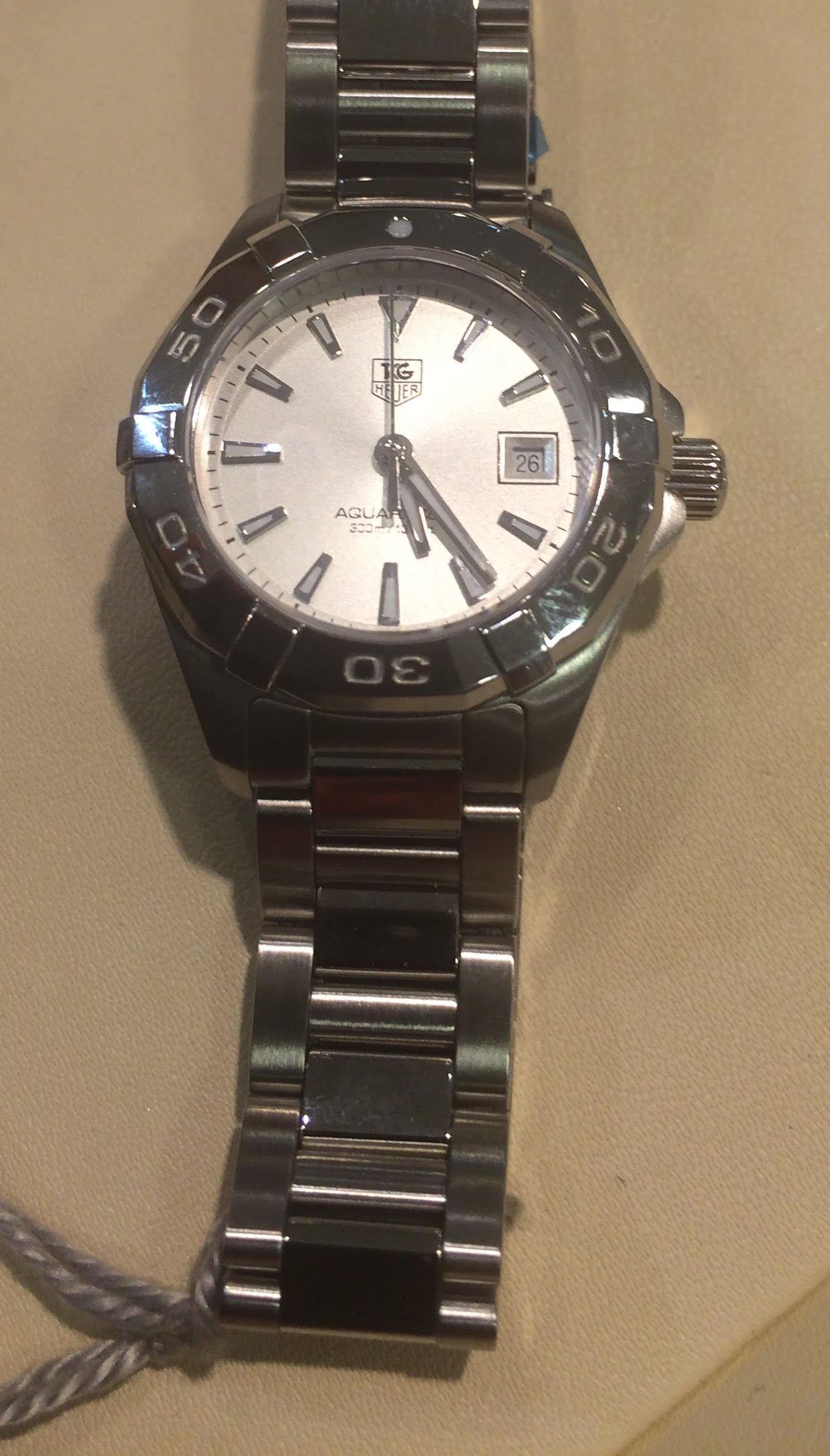 Four years on, my incontinence is still terrible. It’s hard to leave the house in the winter, when my asthmatic cough triggers my bladder.

Wetting yourself on a freezing cold street in December isn’t fun.

Even when I’m having a crappy day, my watch still makes me smile, and has held up well during 1000 bedtime baths (I just did a quick count up), and I’ve definitely had nappy changing moments go awry on it.

It’s still sparkly and lovely, but I definitely wouldn’t mind hiring the services of one of Meg and Harry’s royal household to give it a polish! 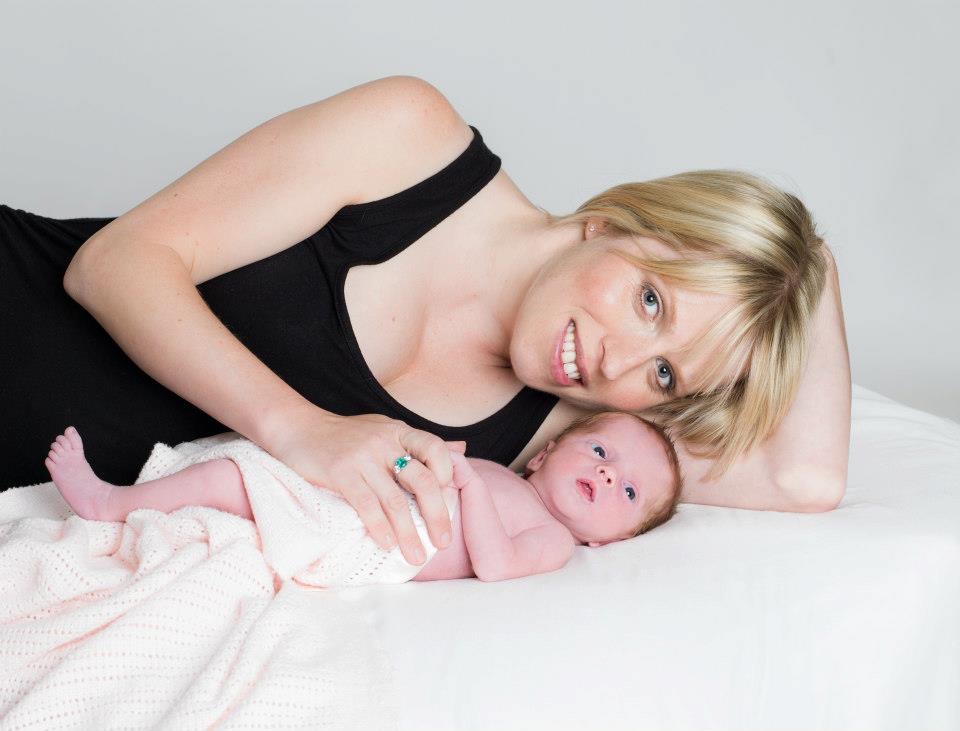 Curled up on the sofa next to me, Chloe fiddles with the ring on my left hand.

It’s a habit she’s had since she was old enough to turn it, pushing the gemstones around and around. She loves it, as do I.

It’s an emerald, flanked by two diamonds, and dates back to the 1920s.

There’s a flaw in one of the diamond and the emerald has a tiny chip, but to me it’s perfect and I’ve worn it every day for the past six and half years.

My husband gave it to me after Chloe’s birth, when I was lying slightly shocked, bruised and battered in a hospital bed – my tiny, perfect girl sleeping in the crook of my arm. 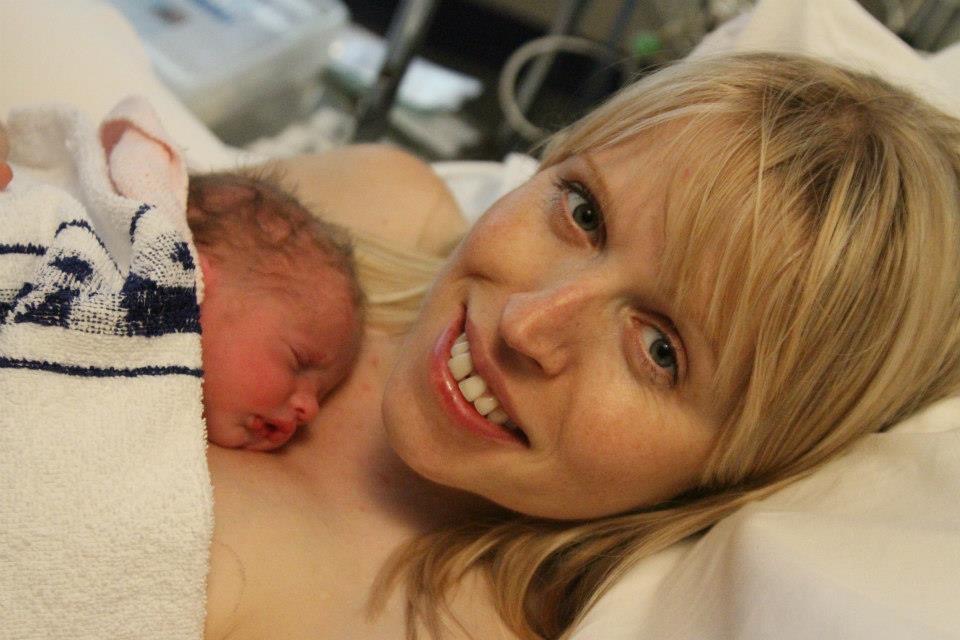 My push present although, because I had an emergency C-section, we’ve dubbed it my ‘slice and dice’ present.

I never thought I’d be the kind of woman who would want, or receive, a ‘push present’.

The name given to an extravagant gift – normally an item of jewellery – given by the husband (or partner) to a woman when she has a baby.

Surely, I thought, the baby is gift enough – especially when I’d endured years of infertility which resulted in us needing IVF to concieve.

But then, when I was about five months pregnant, my husband, then a Major in the British Army, dropped the bombshell that he was being sent on tour to Afghanistan for over two months.

Desperate and guilty he suggested he could use his bonus money to buy something special for me, something I could wear and that one day our daughter could have.

We found the ring in an antique shop and I fell in love – the green stone symbolic of our unborn child who we’d already named Chloe, meaning ‘Green Shoot’. And three stones for the three of us.

Desperate and guilty he suggested he could use his bonus money to buy something special for me, something I could wear and that one day our daughter could have

The two months he was away were horrific, I was in and out of hospital and suffered from such severe oedema I could barely walk.

Contact with Ed was sporadic and when we spoke I tried not to moan knowing there was little he could do to help. I was worried about him, and our baby, all the time.

When Ed had been home for a fortnight, I developed life-threatening Pre-eclampsia and Chloe was delivered prematurely at 36 weeks.

It was a scary 24 hours but she was here, safe, and so was he. Ed signed off from the Army not long afterwards, so in many ways the ring marks more than Chloe's birth. 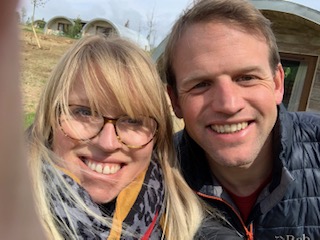 Three years later we had a son and, while there was no official push present, Ed bought me an eternity ring from the same antique shop a few months later.

So, when the time comes, it’s fair and both my children will have 'their' ring.

I don't come from a family with heirlooms and won't inherit fancy jewellery from grandparents or parents which means these two items, and my engagement ring, are extra precious.

Nowadays we wouldn't have the spare cash for this kind of purchase – anyway, I'd rather spend the money doing something as a family.

But I'm very glad to have them and the fact that they mark such important stages of our life.

I hope Harry is planning a push present for his lovely Megan.

There might be a vault heaving with Royal Jewellery but something that he chooses, with real meaning, to mark birth of their first born will have more value to her than all the gems in the Tower of London.

In more mum news, this woman was mortified after her son had a ‘poo-splosion’ at an indoor playground causing all the kids to be evacuated.

While this little girl won't live to see her third birthday unless her parents raise £500k for an urgent transplant not available on the NHS.