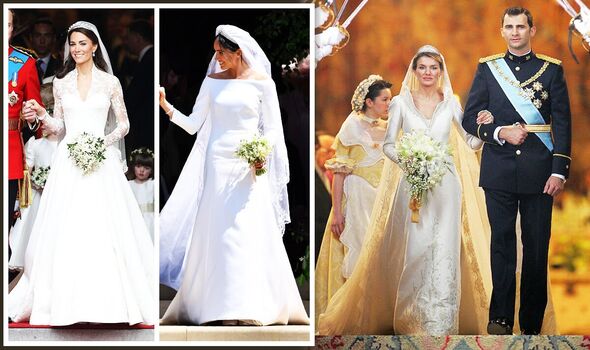 Queen Letizia, 50, who married King Felipe on May 22, 2004 reportedly wore the most expensive wedding dress of all time. Her £6million show-stopping wedding dress was designed by royal couturier Manuel Pertegaz.

It was made of white satin woven with Valencia silk, with an open standup neckline in the shape of a corolla, whereas the bottom half featured a wide skirt.

She accessorised with the Prussian Tiara, an empire-style tiara in platinum and diamonds, gifted to her by her mother-in-law Queen Sofia.

Queen Sofia wore the tiara herself on her own wedding day to King Juan Carlos in 1962.

The shoes Letizia wore were made by Spanish shoe designer Pura Lopez.

Letizia and Felipe got married on a rainy day back in May 2004. The religious ceremony took place in Madrid, and the ceremony welcomed 1,200 guests.

Despite the rain, Queen Letizia looked beautiful in her £6million wedding gown.

One of the reasons the dress was so expensive was because of the embroidery in gold thread.

Queen Letizia was joined by her friends and bridesmaids Victoria Codorniu and Claudia González, who wore much more traditional gowns by Spanish designer Lorenzo Caprile based on Francisco de Goya’s paintings.

The yellow-gold colour was broken up by white lace aprons and matching shawls, and they wore gold polka dot snoods over their updos.

It was made in collaboration with Sarah Burton of Alexander McQueen.

Meghan Markle’s wedding dress is estimated to have cost £110,000, and the Duchess of Sussex paid for it herself.

The timeless gown was the handiwork of Clare Waight Keller, of the Parisian fashion house Givenchy.

The marriage between Letizia and Felipe came as a surprise to many in Spain.

The royal couple met at a dinner party and were introduced by a mutual friend.

However, they had been secretly dating for a year before they announced their engagement.

Letizia was a well-known news anchor for Spanish national TV. The then-Prince proposed to Letizia with a white gold ring featuring 16 baguette-cut diamonds.

In 2014, Felipe and Letizia became Spain’s King and Queen when King Juan Carlos abdicated the crown.