LONDON — The Victoria & Albert Museum is opening its first exhibition since the COVID-19 outbreak, and the subject is a feel-good one: handbags.

Originally planned for last April and redesigned with a new set of safety guidelines and one-way traffic system, the show looks at luxury and statement handbags through a cross-cultural lens over more than five centuries.

“There have been very few exhibitions on the subject in the last 30 years, yet you see how important bags are for the fashion business, and for contemporary fashion brands. There was a sort of disconnect,” said Dr. Lucia Savi, who curated the exhibition.

Over the course of a year, Savi mined the museum’s archive, which houses more than 2,000 bags from the 16th century to the modern day.

The Fendi baguette that appeared in “Sex and the City” and helped to kickstart the “It” bag phenomenon of the Nineties makes an appearance, as do social media sensations such as Off-White’s fanny packs and the Turkish label Manu Atelier’s buzzy designs.

The idea was to examine the symbolic meaning of the bags, as well as their functional purpose of carrying men’s and women’s most private and important possessions. 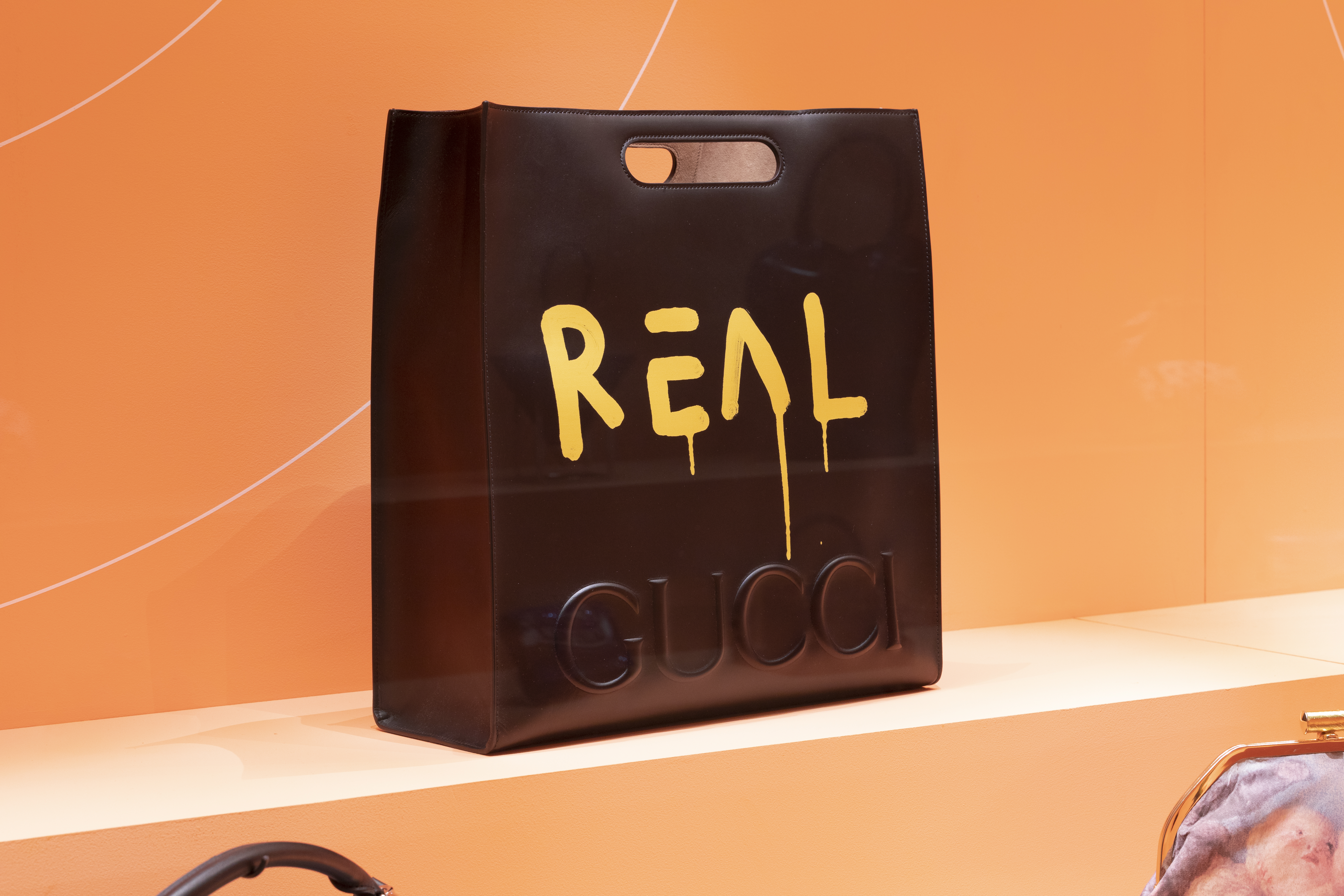 Inside the “Bags: Inside Out” exhibition. Courtesy of Peter Kelleher

“There’s a kind of tension between private and public, inside and outside,” Savi said in an interview ahead of the show, which opens to the public on Saturday.

“When you step out of the house, you carry the things that you really need with you. So there’s an intimate connection, especially because you cannot see what’s inside the bag, our belongings are kept private. Then again a bag is a public accessory, it tells others who we are and who we aspire to be. It’s really about status.”

The exhibition has been split into different parts to illustrate the many facets of the bag. When looking at function, Savi points to styles that have been shaped to accommodate what they’ve been designed to hold, from coin purses, briefcases and doctors’ bags to lightweight military backpacks and gas mask bags dating to the Second World War.

“Think about coins versus banknotes: That changed the way we design bags,” she added, nodding to the array of styles for men and women, and to the fact that both genders can have intimate relationships with their bags.

“There’s this idea that men don’t ‘do’ fashion, although they do get into it, and they do get dressed,” she said.

“Not every man carries a handbag, but if we’re talking about briefcases or gym bags, then they do spend a considerable amount of money on bags. They might have a longer relationship with each bag, and in their own way they do have an attachment to their bags, and they’re quite specific about what they want and how they want it, especially nowadays with street style.”

The exhibition looks at handbags from a status point of view, showcasing some of the most recognizable styles in modern history — Hermès Birkins and Kellys; Gucci’s Jackie bag; the Chanel 2.55; the Fendi baguette and Mulberry’s Alexa — to illustrate why they became so coveted, and the origins of the “It” bag phenomenon.

“’It’ bags exploded in the late Nineties, early 2000s, but that explosion didn’t happen from one day to another, there was a build up,” said Savi, explaining that some of the most famous bags had been around for years until they shot to new levels of fame with celebrity associations and TV.

“Until that moment, brands hadn’t really thought they could have this really important means of revenue. There was no strategy about having limited-edition bags. It just got to a point where everyone was buying certain styles, the brands had no more to sell and the idea of limited-edition came about.”

The “It” bag is no longer a phenomenon, so the exhibition ponders what took its place. 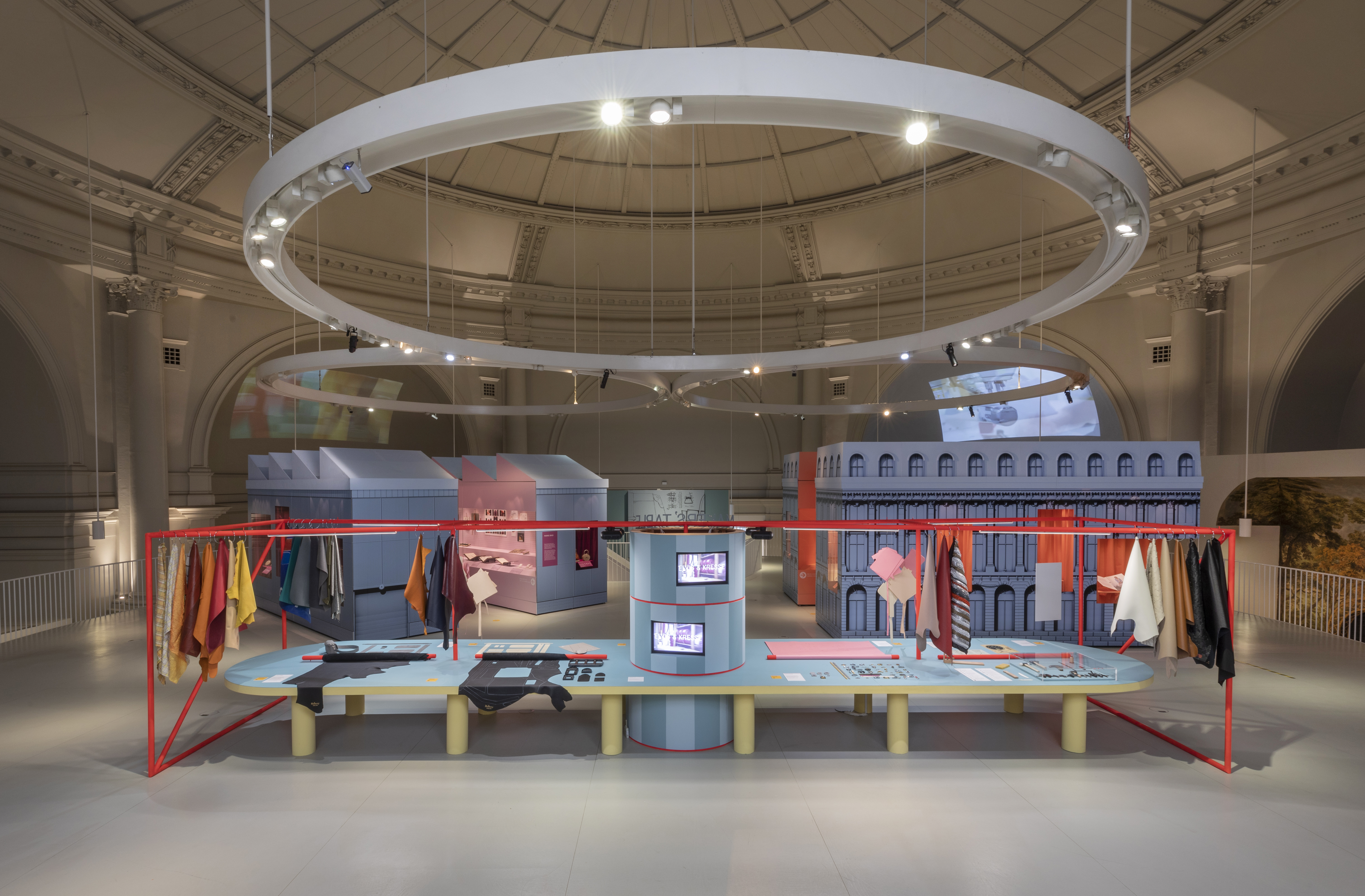 Inside the “Bags: Inside Out” exhibition. Courtesy of Peter Kelleher

“What’s happening today is social media. Nowadays, a bag needs to be Instagrammable to be successful. It’s all about the power of the image,” said Savi, adding that the rise of the social platform has made room for younger labels to claim some space in the luxury handbag sector.

That’s why she decided to highlight new bag players alongside Hermès and Chanel, such as bags designed by the Chinese influencer Mr. Bags and Manu Atelier’s signature Pristine design.

Manu Atelier sisters and designers Merve and Beste Manastir grew up in a leather artisan workshop, watching their father design and create bags. “We always believed his talent could be international. The Pristine bag is actually based on one of his original designs that he did 20 years ago. The fact that it’s being shown today at the V&A exhibition gives us a lot of pride,” they said.

While Manu Atelier may be young, and a hit on Instagram, that hasn’t been a distraction for the sisters. “We wanted to keep focused on heritage, timeless designs and products with a story and craftsmanship” from the get-go, they said.

Savi has acquired the Manu Atelier bags for the V&A collections, “so they’re going to stay in the V&A archive,” she said.

Another section is dedicated to the craft of making bags, in a bid to shine a spotlight on the different layers of people and skills involved in the process of creation, from the designer to the leather manufacturers, to the companies dedicated to producing the hardware, to the sustainability advocates sourcing recycled materials. 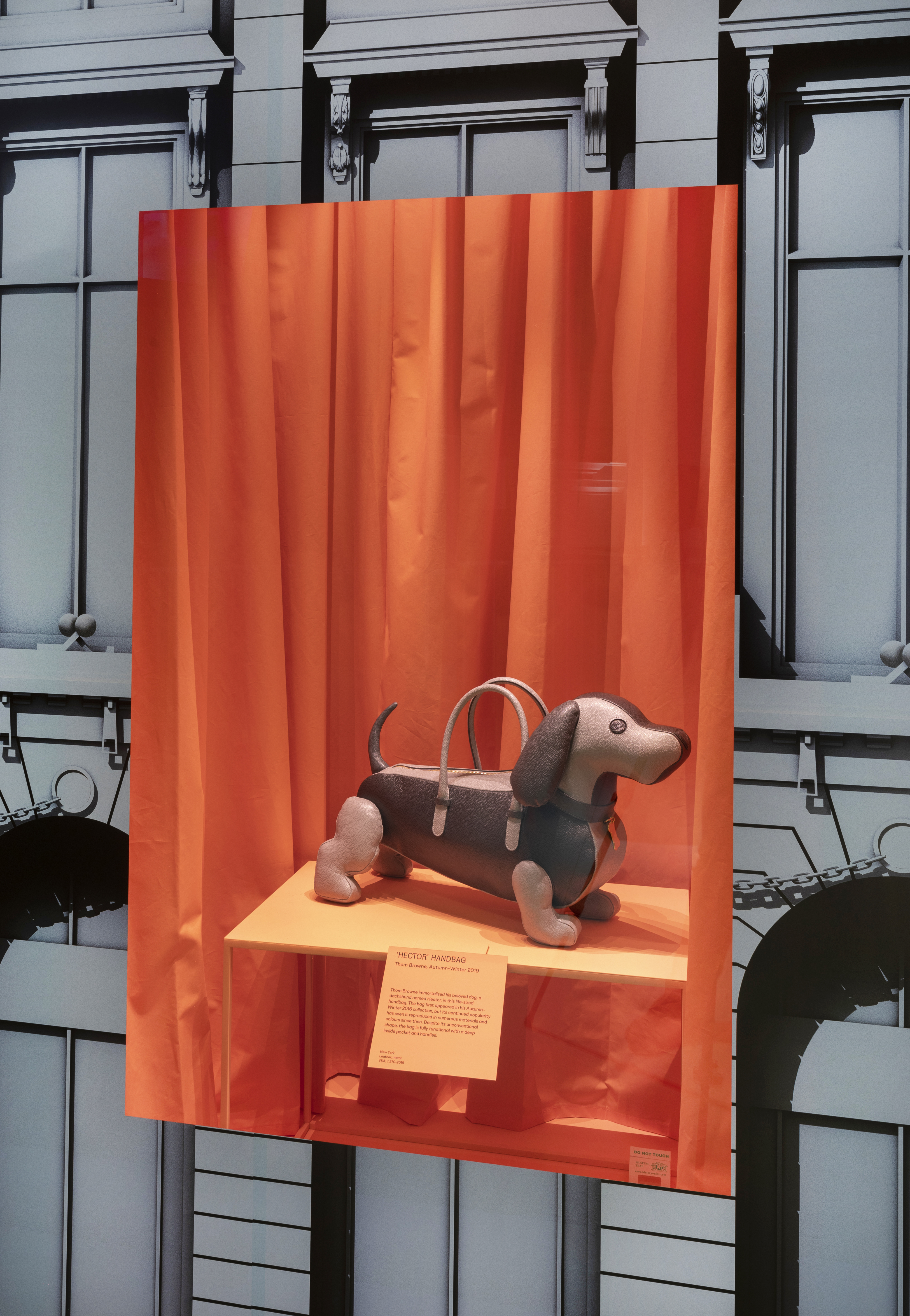 Inside the “Bags: Inside Out” exhibition at the V&A Museum. Courtesy of Peter Kelleher

“The art of making bags, especially when they reach certain prices and a certain quality, should be celebrated. But sometimes people aren’t even aware [of the process],” Savi said.

Now that consumer interest in how things are made is peaking, she hopes the exhibition can incite useful discussion around the topic of craft, the ethos of different materials — and sustainability.

“When you think about leather, most of it is a biproduct of the meat industry. While thinking about vegan leather, is it made of plastic? What’s the repairability of each material?” she said, paving the way for the possibility of a whole separate show on raw materials and recycling in fashion. 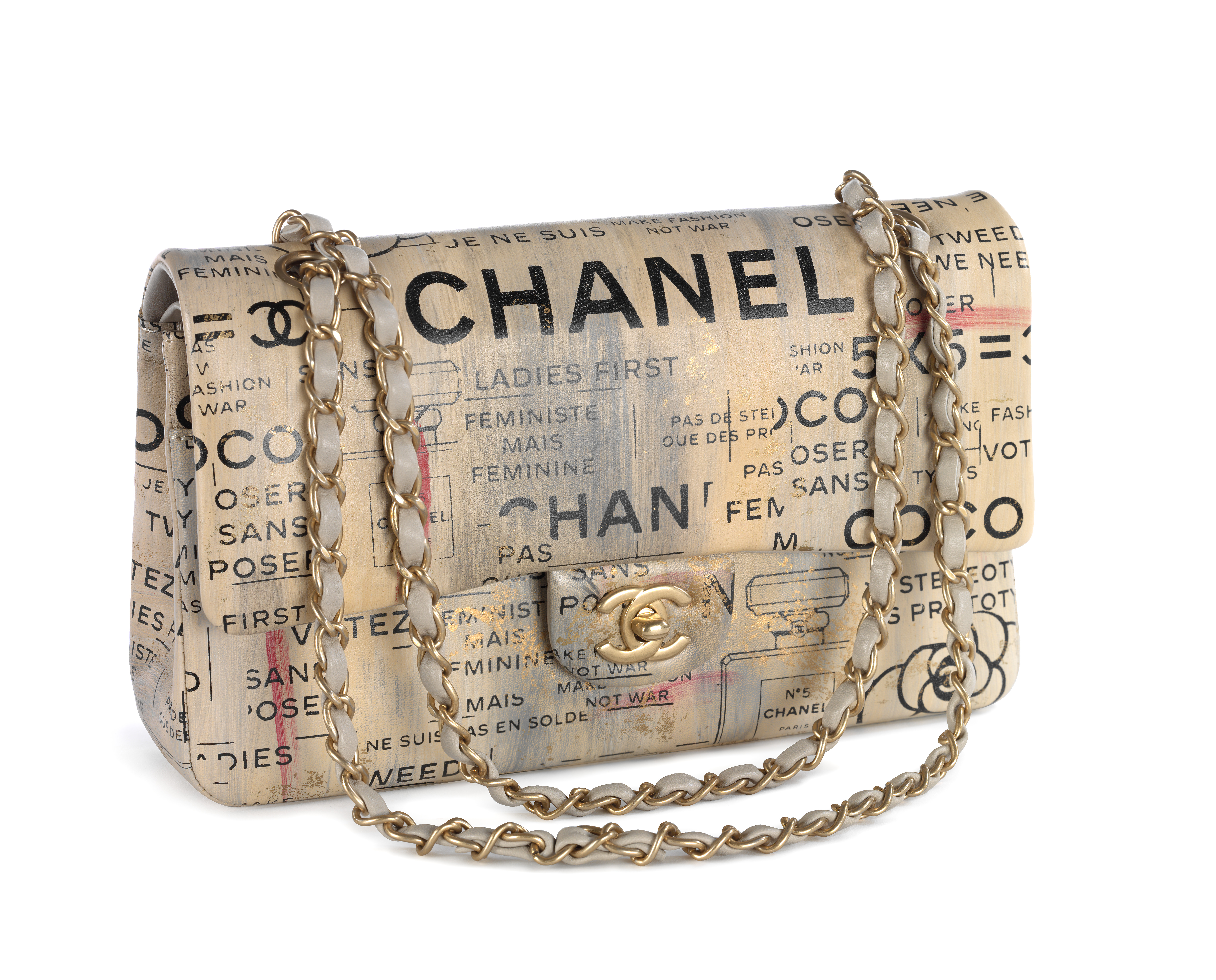 A Chanel bag on display at the “Bags: Inside Out” exhibition at the V&A Museum. Courtesy of the V&A