WHEN JULIE Goring first sneaked onto her mum's sunbed when she was just 13, she had no idea her tanning obsession would leave her terrified and housebound.

The mum-of-one was horrified when an innocent-looking freckle on her ankle turned out to be deadly melanoma – and doctors had to remove inches of flesh from her 'rotten foot', leaving her with a permanent limp. 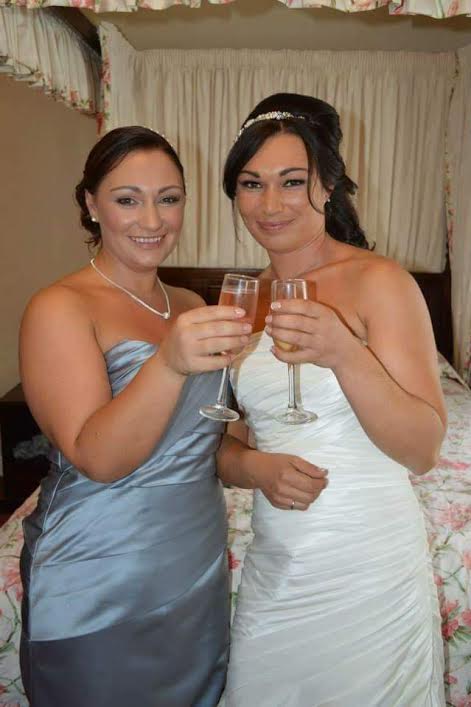 As a schoolgirl Julie loved the golden glow her mum's sunbed left her with, so snuck onto it secretly for three years.

By the time she was 16 she'd top up her tan five times a week with 20-minute sessions in a sunbed shop on the way to school.

Sunbeds had become a habit – one she bitterly regrets now.

"I never will use a sunbed or sunbathe again – it’s absolutely not worth it, a suntan is not worth it and don’t want to go abroad, I’m scared at the thought of it," Julie, now 37,  tells The Sun Online.

"The damage I have now is irreversible. I have melanoma and the doctor said at any time it can happen again."

One in ten young Brits admit to using sunbeds – despite the fact that using sunbeds before the age of 35 increases the risk of deadly melanoma by 87 per cent.

This week Fabulous has launched its Dying For A Tan series to highlight the devastating effects of sunbed use.

As well as fighting cancer, Julie now struggles to walk because of the operation on what she now calls  her "rotten foot" because of the gaping wound she's been left with.

Unable to walk properly, she has also gained three stone and has been signed off sick from her job with anxiety and depression. 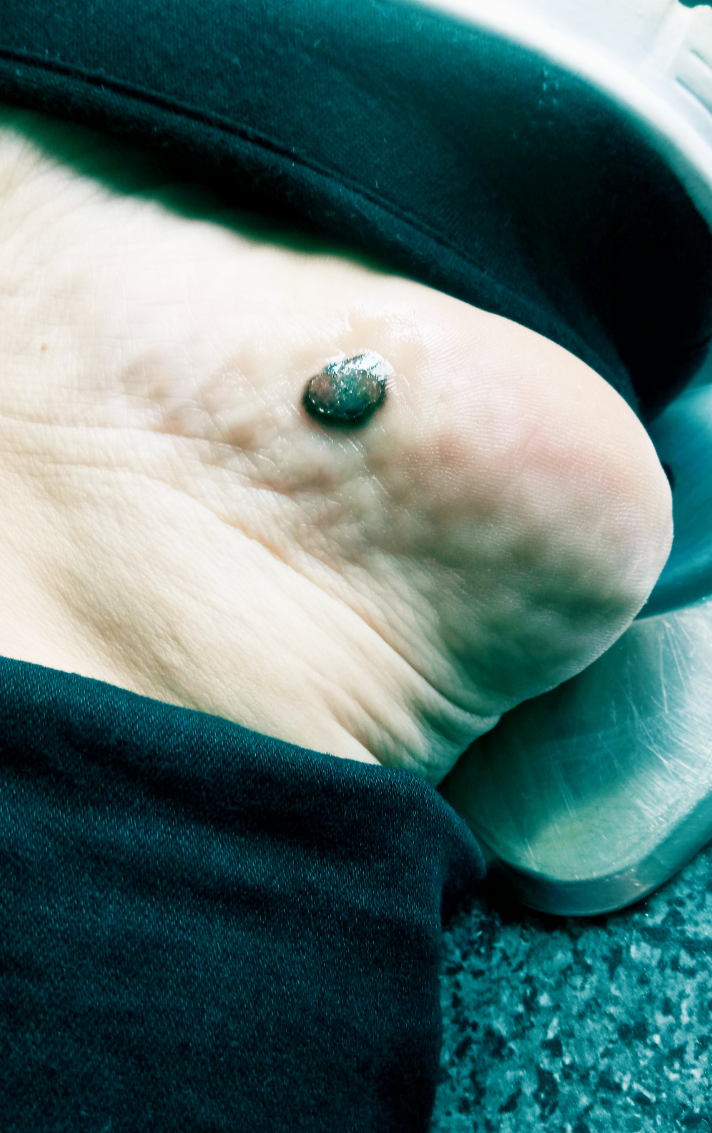 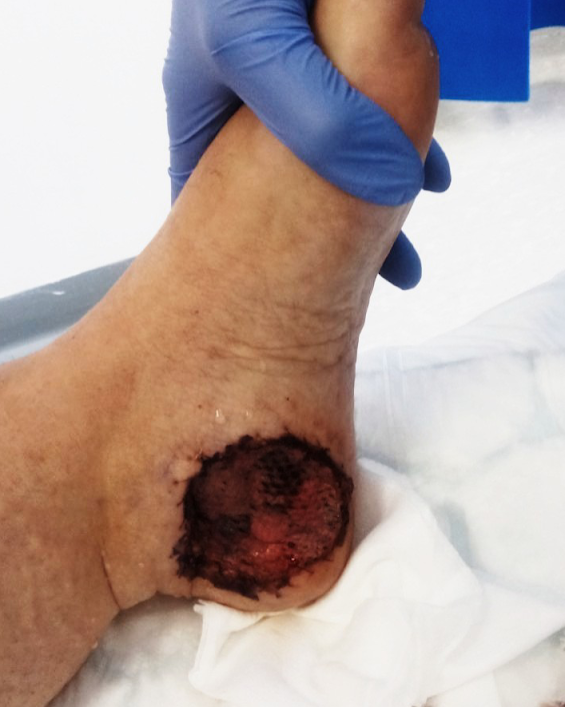 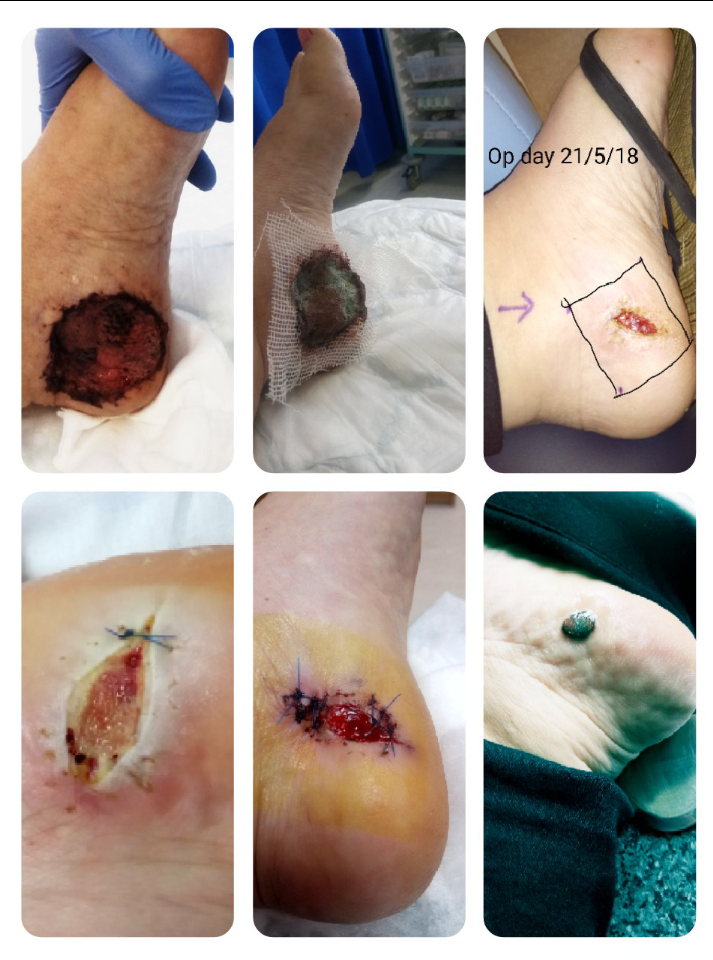 'Cancer is all my own fault'

Just 20 minutes on a sunbed is equivalent to four hours in the midday Mediterranean sun and Julie felt that her year-round tan made her more attractive.

But those years became the biggest regret of her life when in March 2018 her mum pointed out a dubious-looking freckle on her ankle.

By that point Julie had been using sunbeds for 24 years.

“I’d watched it grow for about a year from just a little freckle,” she admits.

"Then it started to get a bit big, around the size of 5p coin." 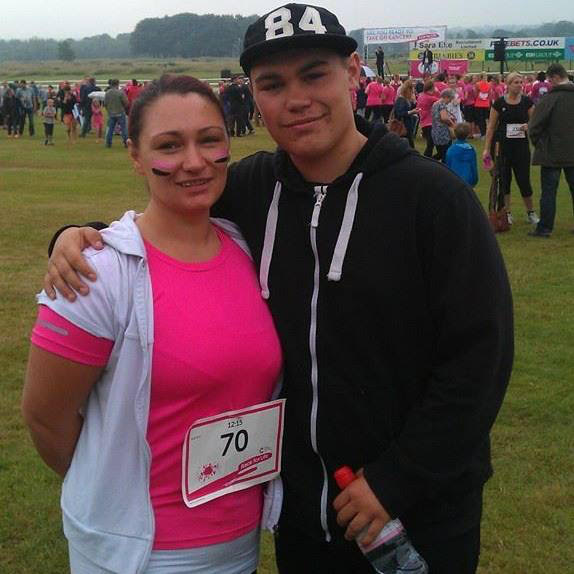 Julie went to the doctor for an unconnected issue, then plucked up the courage to mention the mark.

“I asked her to look at my foot. She said she was really worried and going to have to refer me," Julie recalls.

"The feeling was overwhelming because I thought she was going to tell me everything was OK.

"It just hit me how long I had actually left it for. I just thought, 'This is all my own fault.'"

Around 16,000 new melanoma skin cancer cases are diagnosed in the UK every year – that's 44 every day.

And melanoma, the deadliest kind of skin cancer, claims the lives of 2,300 of those each year.

'Wound made me feel sick'

“I’d never been so scared in my life,” she says, before recalling how her mum took the news.

"She was devastated. She feels bad for owning a sunbed. She was always a sun worshipper and always had a tan. I did sort of copy her."

Julie had an operation to remove the mole in May 2018, with the cut doctors made was so deep a skin graft was needed, leaving Julie with another scar on her thigh.

"The surgery itself was relatively quick and straightforward. I was sedated, while surgeons performed a skin graft on my foot, which took just under an hour," she explains.

"But the recovery period was extremely painful, and I was on painkillers for months after the surgery.

"I wasn’t confidently back on my feet until September of the same year, despite still experiencing pain." 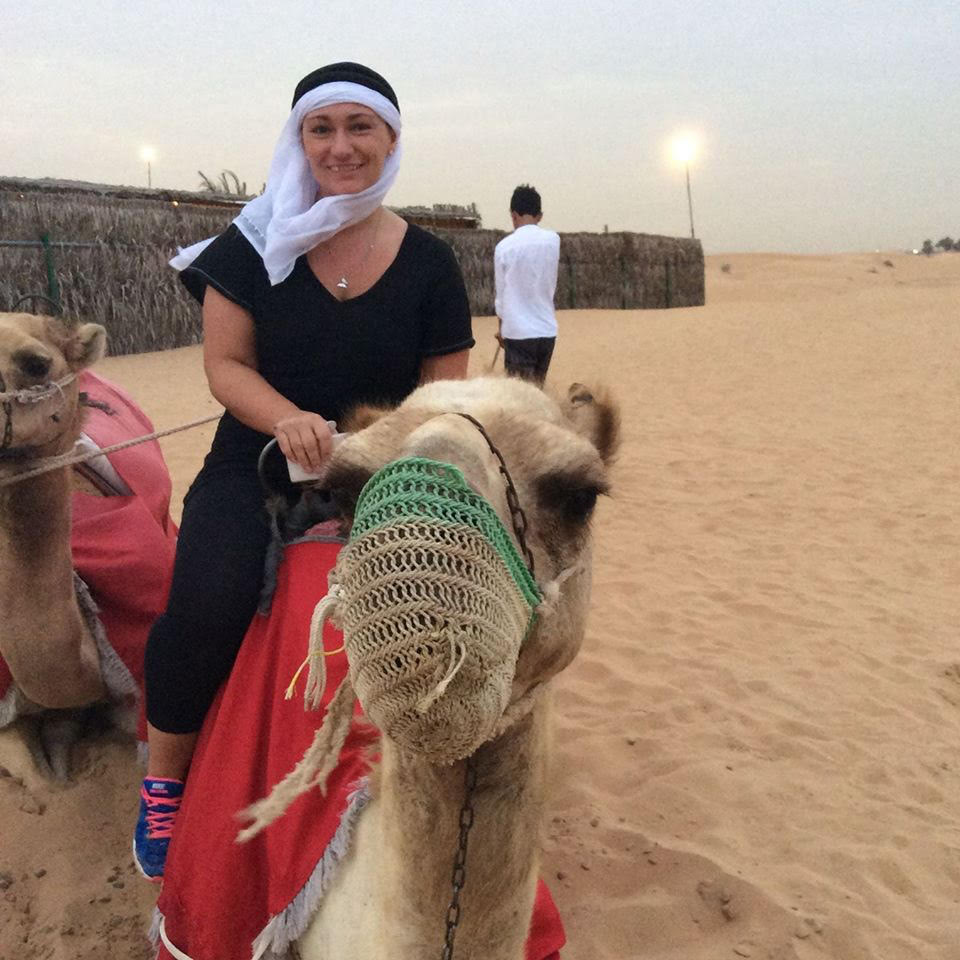 Julie used to love travelling and would  sunbathe while abroad – she always used suntan cream – but is now too scared to leave the house, let alone the country

She was completely unprepared for what her recovery would be like, and the toll it would take on her.

“After surgery, the bandage on my ankle was seeping with blood and when they took it off I couldn’t bear to look at my wound," she admits.

“I was so scared but when I did finally look, it made me feel sick.

"I wasn’t expecting the wound to be so big – the mole had been less than 1cm, but the wound was about two-thirds the width of my ankle.

"When I look at the scar, I just think it could have been prevented had I gone to see the doctor sooner. I feel so stupid about it."

Dying For A Tan

There are an estimated 7,000 tanning salons in Britain, with some offering sessions from as little as 50p a minute.

Kids as young as EIGHT are using sunbeds, with seemingly little understanding they are playing Russian Roulette with their health.

According to Cancer Research UK, Melanoma skin cancer risk is 16-25 per cent higher in people who have used a sunbed (at any age), compared to people who have never used sunbeds.

This is because sunbeds pelt the skin with such strong UV rays which increase the risk of developing malignant melanoma – the most serious form of skin cancer.

Just 20 minutes on one is comparable to four hours in the sun – with many stronger than Mediterranean rays at midday.

In many cases the damage is invisible until it’s too late, as it can take up to 20 years to become apparent.

Around 16,000 new melanoma skin cancer cases are diagnosed in the UK every year – that's 44 every day.

There are around 2,300 melanoma skin cancer deaths annually – that's more than six every day.

It’s part of the reason the World Health Organisation has deemed sunbeds are as dangerous as smoking.

This is why Fabulous says it is time to stop Dying For A Tan. 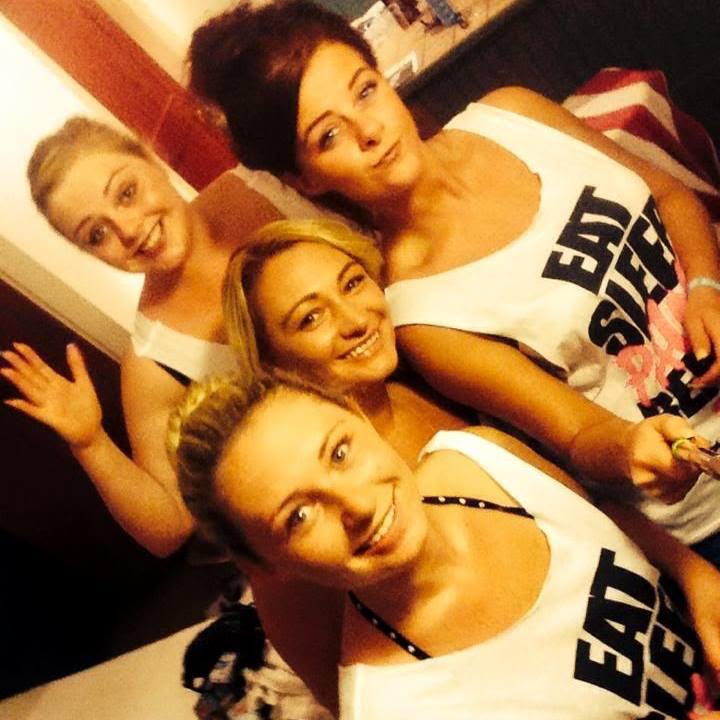 'I've been through hell'

Before the cancer Julie was fit and healthy, taking part in the Great North Run and climbing the Three Peaks – the highest mountains in England, Scotland and Wales.

But after the operation she developed pain in her leg which turned out to be nerve damage that may have happened during the operation, and now she struggles to even leave the house.

"I can’t even put shoes on," says Julie, who's also put on three stone. "The scar tissue is still quite tender and soft, I can barely walk let alone exercise."

The effect the diagnosis has had on her mental health has also been devastating.

"It's still an ongoing battle," she says.

"I found it difficult to adjust to being confined to my house, having previously been a really outgoing and active person.

"I can deal with my foot and my operation but the anxiety and the depression that came afterwards has crippled me."

They are so bad she's been signed off sick from her job as a support worker for adults with learning difficulties.

Her anxiety worsened when she found two more suspicious moles on her groin and stomach this year.

The most common sign of melanoma is a new mole or a change in an existing mole.

In most cases, melanomas have an irregular shape and are more than one colour. The mole may also be larger than normal and can sometimes be itchy or bleed. Look out for a mole which changes progressively in shape, size and/or colour.

The ABCDE checklist should help you tell the difference between a normal mole and a melanoma:

Although they were benign her anxiety spiralled, with the mum also devastated when she thinks about her 22-year-old son Jordan.

"I do feel like I have put my son Jordan through unnecessary pain over the past year because I just live here with him and he has seen me go through hell," Julie, who is checked by a GP every three months, says.

"I feel so bad that I have made him sit there and watch me go through this. I wouldn't wish this on anybody's family.

"He has a mole on his head and we have been to get it checked for peace of mind. I'm not going to live in fear with him as well as myself.

"He's never ever gone on a sunbed and he never will."

For now, single Julie can't even think about meeting someone to share her life with.

"It’s not even on my radar to start looking for a partner," she says.

"The entire ordeal has massively ruined my self-esteem, and to be truly honest I don’t feel confident meeting new people.

"My ex-husband has been beyond supportive over the period, and for that I’ll be forever grateful.

“I’m worried about how my health will be a lot to take on for another person – having to explain my chronic back pain (which still impacts me day to day), as well as my ‘rotten foot’ which isn’t exactly attractive.

“For the time-being, I’m prioritising my recovery, well-being and spending time with my family.”

Julie has partnered with SunSense UK, a high factor sunscreen that is available on prescription to those who have melanoma

The first sign of non-melanoma skin cancer is usually the appearance of a lump or discoloured patch on the skin that continues to persist after a few weeks, and slowly progresses over months or sometimes years.

There are two common types of non-melanoma:

Basal cell carcinoma (accounts for 75 per cent of skin cancers):

Squamous cell carcinoma (accounts for the other 20 per cent):