In July 2018, Jessica Vande Werken was nervously waiting for her date, Robin Imogene Goode, at Cubbyhole, a bar in Manhattan. They had matched on Tinder, and were meeting in person for the first time. When Ms. Goode walked into the bar, Ms. Vande Werken noticed her immediately.

The two hit it off, and ended up going to a comedy show together later that night. They both had travel plans so they didn’t meet up again until about a month later, for dinner. After their third date, at a wine bar in Brooklyn, they had their first kiss in front of a subway stop.

“Then we started seeing each other all the time,” said Ms. Goode, 29.

About six months into their relationship, they realized there was a lump in Ms. Goode’s breast. Ms. Goode was 27 at the time, and had no family history of breast cancer. When Ms. Goode, who is a manager of programs and client relations at Harvard, working remotely in Charleston, S.C., went in for an appointment with her general practitioner, the doctor suggested that she wait a month and come in for an ultrasound if the lump hadn’t gone away.

They spent the next month trying to keep their minds occupied. In early January they took a trip to Greenport, N.Y., where they drank wine, played Scrabble and sang karaoke.

“It was the best weekend ever,” Ms. Goode said.

Not long after they returned to New York, Ms. Goode learned she had a rare form of breast cancer.

“I mean, Jess absolutely saved my life, in the most physical sense,” Ms. Goode said of Ms. Vande Werken who first noticed the lump. “I was absolutely not doing self-exams at 27, and who knows when I would have found that by myself.” 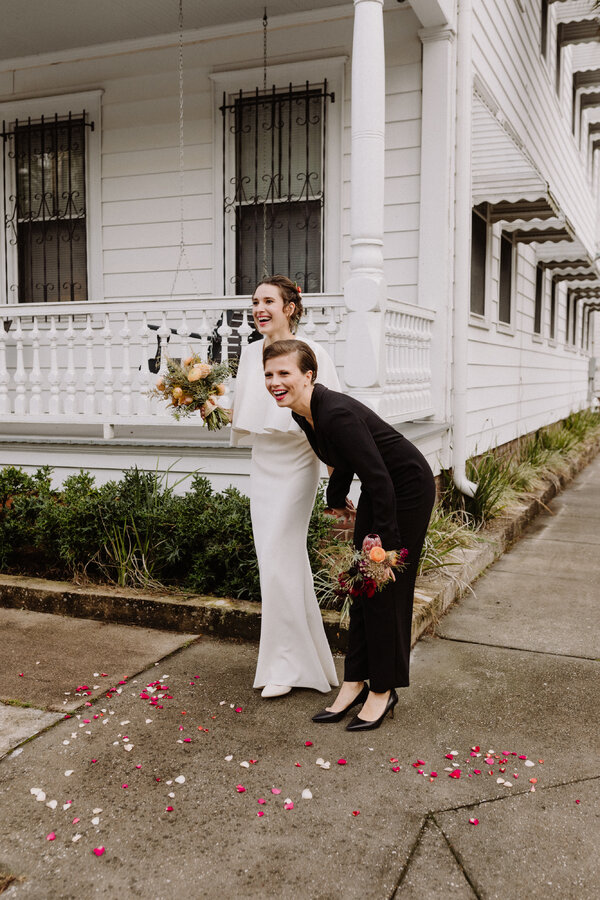 They moved in together the day after the diagnosis, and Ms. Goode scheduled a double mastectomy for Feb. 15. On their first Valentine’s Day together, the couple went out for a very early dinner, and then went home to prepare for Ms. Goode’s surgery.

“It was really tough,” said Ms. Vande Werken, a creative director at R/GA, a digital design company, also working in Charleston. “But I do remember thinking, you know, when it happened, that we’ll just get through this. We’ll figure out how to do it and we’ll get through this.”

Over the next few months, Ms. Goode received chemotherapy, and had her final treatment in July 2019. After months of uncertainty, the couple was ready to move on to the next chapter of their lives. They had been talking about getting married, and in December 2019 Ms. Goode made an appointment to look at engagement rings. It was supposed to be a surprise, but it didn’t stay one for long — Ms. Vande Werken had made an appointment at the same store on the same day.

A month later, on another trip to Greenport, Ms. Vande Werken proposed on the beach. Ms. Goode said yes, and pulled out a ring as well — she had been planning to propose at the same time on the same beach.

“We just have so much fun together, doing even super boring stuff,” Ms. Vande Werken said. “I’m excited to always have that.”

In March 2020, the couple moved to Charleston, where Ms. Vande Werken plans to open a wine bar. They bought a home together, and set a date for a small wedding with just their family in November.

A few weeks before their wedding, Ms. Goode tested positive for Covid-19. The couple went into isolation, and recovered in enough time to still have their wedding as planned. They were married Nov. 28, at a rental property near their home in Charleston, in front of seven family members. The brides’s fathers, Jerry Vande Werken and Daniel Goode, who are both Universal Life ministers, lead the ceremony. (Mr. Vande Werken won the right to be the legal officiant after a coin toss.)

“One of the first things that I was immediately attracted to about Jess was how driven she is,” said Ms. Goode, who plans to take Ms. Vande Werken’s last name. “That has carried over into everything that we do.”