Serena Williams may be facing a ban on her famous "catsuit" at future French Opens but on Monday, New York time, all eyes were on her "tutu" at the US Open. 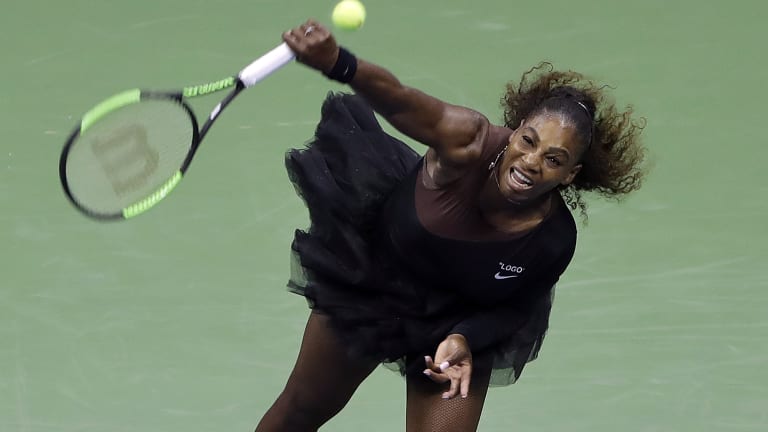 Et tutu … Serena Williams in her new look at the US Open.

The 23-times grand slam champion made her round one appearance against Poland's Magda Linette in a black tutu-style dress designed by Virgil Abloh for Nike.

The one-shoulder dress, which is retailing to fans for $700, features a full tulle skirt, the Nike swoosh and the word "LOGO" – the all-caps wording a trademark of Abloh's own label, Off-White.

To complement the dress, Abloh also designed a jacket and shoes for Williams, who collaborated on the project.

Williams made her US Open debut in the tutu just days after French Tennis Federation president Bernard Giudicelli told Tennis Magazine the French Open would be reviewing her fashion choices in the future.

“I think we sometimes went too far,” he said. “The combination of Serena this year, for example, it will no longer be accepted. You have to respect the game and the place.”

While the ban isn't yet official, the backlash against Giudicelli was immediate.

One of the reasons for the suit, according to Williams herself, was to help her blood circulation, an issue she has battled since giving birth to her daughter, Alexis Olympia, last year.

“I’ve had a lot of problems with my blood clots,” she said at the French Open. “God, I don’t know how many I’ve had in the past 12 months. I’ve been wearing pants in general a lot when I play, so I can keep the blood circulation going.”