When it comes to social media trends ‘coastal grandma chic’ looks harmless, with its canvas bucket hats, white turtlenecks and bone chinos, but on closer inspection, oh my, what big teeth it has!

“The whole notion of coastal grandma chic makes me feel seasick,” says fashion enthusiast Shona Grant, who is in her seventies. “Shouldn’t it be more about interiors and homes or are we meant to be disappearing into the background with all of these non-colours?” 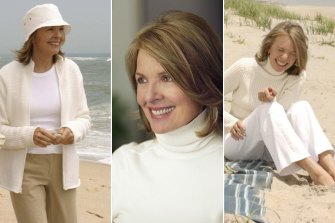 Diane Keaton is the epitome of ‘coastal grandma chic’ in Nancy Meyers’ 2003 film Something’s Gotta Give.

The trend emerged on TikTok, where influencers pose in the neutral calm of outfits inspired by Diane Keaton’s wardrobe in the 2003 Nancy Meyer’s movie Something’s Gotta Give. In a post that has been shared by Keaton, TikTok creator Lex Nicoleta says, “If you love Nancy Meyers movies, coastal vibes, recipes and cooking, Ina Garten, cozy interiors, and more, there’s a good chance you might be a coastal grandmother.”

Actress Anne Hathaway, who starred in Meyer’s 2015 film The Intern, posted a photograph to Instagram wearing a basic beige ensemble with the hashtag #coastalgrandmother, while singer/actress Selena Gomez donned an oatmeal knit cardigan for a sunset selfie, but for some women over 60 years old, the trend is fraught rather than fun.

“This notion of grandma coastal conjures up something pale and somewhat invisible and beige. I don’t do beige,” Grant says. “Older people must be visible rather than invisible.”

Having worked in fashion retail and modelled for Melbourne designers, Grant takes a fashion forward stance on social media wearing T-shirts emblazoned with the slogans “Bold” and “Big Pussy Energy” along with pieces from emerging labels.

“I recently turned up for an audition for a grandma role in a television commercial and I knew straight away that I wasn’t going to get it because I don’t fit the image of what an older person should look like to someone two generations younger than me,” Grant says. “Many people in my seventies age bracket slide into invisibility. This seems a way of enabling that.”

Professor Nancy Pachana, director of anti-ageing initiatives at the University of Queensland, recognises the appeal of dressing like Diane Keaton but is concerned when the trend becomes a stereotype for how we perceive older women.

“Some people forget that a woman in her sixties could have been a model, scientist, engineer or anything when she was younger. When you’re older people think you have always been old and should dress in these flowing beige cardigans.” 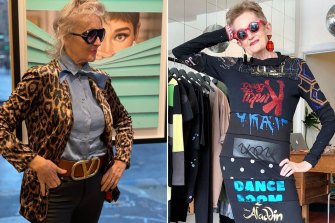 Last year the World Health Organisation identified ageism as a global challenge, contributing to depression in 6.3 million people. Pachana identifies judging people, particularly women, by how they dress for their age or whether they dye their hair as a common example of ageism.

“You don’t know if they are a grandmother,” Pachana says. “Labelling all older women as grandmothers is a subtle form of sexism. The assumption is that they’re not working and putting themselves first. They’re just wearing flowing cardigans in their Hamptons-style living room.”

“To be honest I don’t follow trends,” Ordish says. “I suppose that coastal grandma chic is for women above 60, and I fall into that demographic. The good thing about getting older is that you know yourself and how to express yourself. I have customers saying ‘I could never wear what you wear’ and I just think ‘why not?’”

“Whether you dress like Iris or like oatmeal, it’s the idea you have to conform, going against what you’ve been doing your whole life which is a problem. Being older is the time to know yourself and be more confident.”