The Queen’s fourth child Prince Edward married Sophie Rhys-Jones at a relatively modest royal wedding at St George’s Chapel in Windsor in 1999. Traditionally, the Queen lends royal brides a tiara from her personal collection, but it is thought Sophie’s royal wedding tiara was made especially for her using historic jewels.

Little has been confirmed about Sophie’s beloved wedding tiara, but it is thought it was constructed using four pieces from Queen Victoria’s Regal Circlet.

Sophie’s tiara has been dubbed the Anthemion Tiara due to its use of “a technique used in ancient Greek times that features fanned petals,” according to Vogue.

The diadem was thought to have been made by the then Crown Jeweller, David Thomas of Asprey & Garrard.

The demure tiara perfectly matched Sophie’s classic wedding dress which was made bespoke by Samantha Shaw. 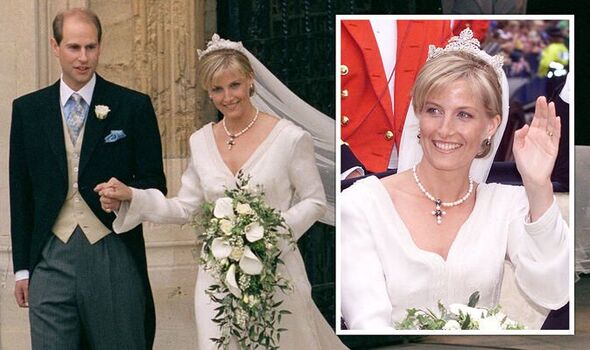 The gown was made of silk organza and crepe, adorned with rows of pearls and crystal beads.

With its sleek silhouette and understated details, Sophie’s gown was a far cry from some of the more elaborate royal wedding dresses of the 1980s.

Ms Keswick (nee Shaw) said: “There was an evening dress under the coat dress, which was to remain super private for the evening dinner, and I had to get the fabric perfectly dyed to colour-match the beautiful stone of St George’s Chapel.”

The v-neck dress was accentuated by a black and white pearl cross necklace, which was gifted to Sophie by Edward along with a pair of matching earrings.

The Anthemion Tiara has been a firm favourite of the Countess’ for formal royal occasions since her nuptials.

Sophie wore the tiara for the royal wedding of Crown Prince Frederik of Denmark and Mary Donaldson in 2004, and the nuptials of Crown Princess Victoria of Sweden and Daniel Westling in 2010.

Sophie is also a fan of aquamarine tiaras, including one with a central oval aquamarine surrounded by diamond scrollwork.

Sophie also wore the Queen’s Five Aquamarine Tiara for the royal wedding of Princess Madeleine of Sweden and Christopher O’Neill in 2013.

In recent years, the Queen lent her Cartier Halo Tiara to Kate Middleton for her wedding in 2011, and Queen Mary’s Bandeau Tiara to Meghan Markle in 2018.

But most royal brides have returned their diadems to the royal vaults after marriage, with Sophie being a noted exception.

Sarah Ferguson was also gifted a tiara by the Queen when she married Prince Andrew in 1986.

Although she walked down the aisle wearing a flower crown, after marrying Andrew, Sarah debuted her brand new York Tiara to the world.

Since her divorce in 1996, the York Tiara has remained Sarah’s personal property and she wore it to Elton John’s White Tie and Tiara Ball in 2001.

Instead of borrowing a tiara from the monarch, she opted to wear her family’s heirloom Spencer Tiara.