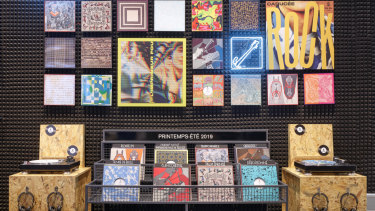 After stopping in New York, Madrid and Seoul, Hermès is bringing its Silk Mix pop-up concept to Melbourne.

The installation takes inspiration from a vinyl record shop —a concept now mostly, sadly extinct—and pairs the French luxury fashion houses' silk scarves (which each take three months and 450km of silk thread to make) with records and soundtracks.

Christophe Goineau, Creative Director of Men’s Silk at Hermès, worked with Thierry Planelle, who has composed the soundtracks to Hermès fashion shows for the last 15 years on the concept. Goineau says Silk Mix mostly came about because he is a music aficionado, as is Véronique Nichanian, artistic director of Hermès men’s.

"We often listen to music when we work and sometimes stopped in our tracks while working and would say ‘that would make a nice cover for a vinyl’ and so we finally did it," he says.

Goineau says the installation speaks to an affinity between fashion and music (and emotion). 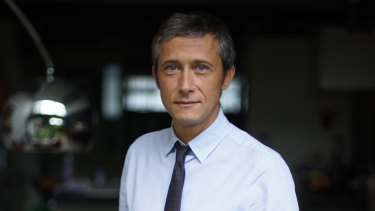 It's an undeniable link. Consider David Bowie's impact on fashion, for example, or the stop-everyone-in-their-tracks moment of seeing Grace Jones on the runway during the Tommy Hilfiger show during Paris Fashion Week last month.

Fashion shows wouldn't be half as emotive without their soundtracks, with special mention to the late Karl Lagerfeld’s final show for Chanel where models did the final walk to David Bowie’s Heroes.

Each of the records (and scarves) in the installation are inspired by a particular runway soundtrack from the last ten years of menswear shows at Hermès.

"I think music has the power to influence people's mood, as [does] fashion, and that is why I think fashion lovers are drawn to music as well. When we wear a garment that we like, we feel better and more confident. It makes us happier. Music has the same effect, but somehow with greater intensity – when we listen to it, it immediately changes our mindset," says Goineau, who sometimes turns to Hermès' extensive archives for a fresh perspective on what has been done before.

"Silk Mix [is about] pleasure – the pleasure of listening to music, the pleasure of wearing a scarf. And we thought it could be interesting to connect silk to music. Music can remind you of certain moments in your life, and you can also get this feeling from a scarf."

Hermès Silk Mix is at FortyFiveDownstairs, 45 Flinders Lane, from March 30 to April 1.