A friendship lasting a decade, a first kiss in the ocean, and a post-wedding photo shoot attended by a pod of seals. Chelsea Bruck and Cyril Bennouna’s love story reads much like a fairy-tale romance, with a modern twist.

The couple first met as teenagers at New Rochelle High School in New Rochelle, N.Y., when Mr. Bennouna randomly sat behind Ms. Bruck in an art history class. While it was not love at first sight, the two hit it off and became fast friends.

“I always saw Cyril as this incredible person,” Ms. Bruck said, and while life would take them in different directions, the two kept in touch as they lived what Ms. Bruck described as “parallel lives.”

Both moved to the Midwest for college, and then abroad. Mr. Bennouna, 31, graduated from the University of Michigan in Ann Arbor in 2011 before moving to Morocco, where his father is originally from, to trace his roots and prepare for his father’s semiretirement. By that point Ms. Bruck, 33, had already graduated from Northwestern University and was living in South Korea teaching English. Both kept blogs that inspired one another, prompting Mr. Bennouna to reach out to Ms. Bruck one day.

“When you’re traveling and you’re so alone, you start reflecting on all the people that matter in your life, and she stuck out to me,” Mr. Bennouna said. “I remember writing to her something along the lines of ‘I hope that one day we get to live in the same city together again so that we can actually be very close friends, because you’re one of my favorite people.’”

That hope came to pass when both moved back to New York in 2012 to work in the restaurant industry. A romance blossomed not long after when the pair met for dinner one evening in August and spontaneously decided to take the train to Coney Island around midnight. There, they rushed into the water, shared their first kiss and spent the rest of the night on the beach. 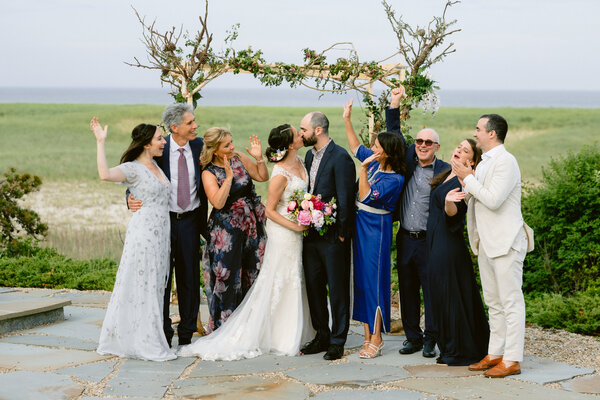 “After that we really just started hanging out all the time,” Mr. Bennouna said. “I was at her place when Hurricane Sandy struck and I spent the entire time there with her. That just sort of sealed the deal.”

“I feel like I knew embarrassingly soon after we started being romantically involved that Cyril was my person,” Ms. Bruck said. “It just felt so natural and so right starting from that August night.”

Mr. Bennouna felt similarly, but marriage was another question the pair ended up discussing over several years. Mr. Bennouna wanted to be with Ms. Bruck, but felt marriage was an institution that commodified women and privileged “traditionally coupled people.” He didn’t want to partake in what he saw as a celebration of inequality.

Ms. Bruck understood his point of view, but believed the institution was changing and wanted their marriage to not only be an example of equality and respect, but a symbol of what Ms. Bruck described as “making my chosen family my legal family.”

Ms. Bruck was surprised and delighted when Mr. Bennouna proposed to her on the morning of Dec. 30, 2018, in Prospect Park. The couple had wanted to marry in June 2020 in the Scotland Borders, but changed their plans because of the pandemic. They were wed on June 8, 2021, at a rental property overlooking Nauset Beach in Orleans, Mass., in a livestreamed ceremony with seven in-person guests. The wedding incorporated elements of both couple’s heritages, including a homemade huppah and a menu with Arab cuisine.

After the ceremony, the couple were taking photographs on Nauset Beach when a group of seals surfaced. Their photographer asked them to run into the ocean. “We didn’t realize it until then but it was like ‘Oh my god this is full circle,” Ms. Bruck said.

“That was so important to us,” Mr. Bennouna added. “And then the seals right there just staring at us. It fit so well into the ceremony.”