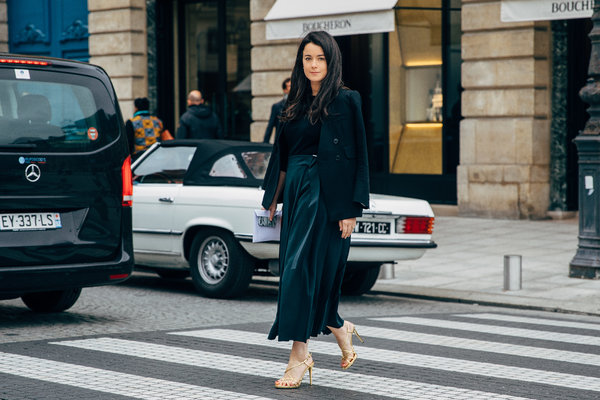 PARIS — Early one morning three weeks into fashion month, I sat in my Paris hotel room with a deepening sense of dread. It wasn’t the prospect of 10 runway shows back-to-back each day, nor filing stories from my phone in (what turned out to be) the nearly constant rain.

Rather, it was doing all that in five-inch stiletto heels. For a week.

The reason? For this article, I had agreed to test a new product that had been doing the front row rounds this season: one that promises you can wear sky-high heels without the inevitable throbbing ache in the balls of one’s feet.

Called — surprise — Stiletto Cream, the product was introduced last month and was the brainchild of the shoe czar Tamara Mellon and Lord Jones, the upscale Los Angeles-based brand behind a hit CBD-infused body lotion.

CBD stands for cannabidiol, an ingredient in marijuana and one of more than a hundred compounds within the cannabis plant. It has been one of the breakout success stories of the flourishing legal international cannabis trade, the market value of which is expected by Euromonitor to reach $166 billion by 2025.

In the United States, the Food and Drug Administration has been cautious about the rapidly growing cannabis industry but the agency is under pressure from Congress to ease the path to market for cannabis-derived products. Retailers are already selling CBD-infused beer, candy and marshmallows, as well as shampoo, face serum and now — foot cream.

A devoted user of CBD products, Ms. Mellon was introduced last year to Cindy Capobianco, the president and co-founder of Lord Jones. They began working on a cream specifically formulated for feet after celebrities, including Olivia Wilde and Busy Philipps, said they used Lord Jones’s body lotion on their feet to relieve the agony of the red carpet promenades. The result retails for $70 a tube, and contains 200 milligrams of CBD (which, according to the labeling, makes it a “high formula”).

As for what that CBD has been scientifically proven to do, it is not exactly clear. Most products are vague in their promises because the Food and Drug Administration prohibits unproven health claims. Most of the information about CBD’s effect on humans is still anecdotal, and few rigorous trials have been conducted that prove CBD preparations are any more effective than other topical pain relievers such as Tiger Balm or Icy Hot.

All of which meant that, when I began applying the new cream to my feet I was, it was fair to say, a skeptic.

For as long as I’ve been working on the fashion week front lines, I’ve been a loafer and sneaker devotee. Occasionally, if the dress code reads “black tie,” I would try the odd chunky strappy heel. The idea that a cream would allow me to totter over cobblestones in five-inch spikes (the kind Ms. Mellon herself is famous for wearing) seemed close to unimaginable.

I told myself to have an open mind. Ms. Capobianco said that each morning I should apply a nickel-size dollop of cream (which would contain the equivalent of about 4 milligrams of CBD) 20 minutes before putting on shoes. So on Day 1 I duly unscrewed the tube, rubbed some on and immediately discovered I needed socks to prevent wiping out on the bathroom floor (the base is cocoa butter, shea butter, olive oil and fruit acids). Then off I went in gold metallic sandals with a 4.5-inch wafer thin stiletto heel, lent by Ms. Mellon, taking my reporting to new, well, highs.

I fully expected that by midday, I’d have given up and swapped the stilettos for sneakers, but in fact there was nary a niggle; my feet just felt quite … warm and fuzzy? By 3 p.m. there was still no soreness, and by 7 p.m., when I felt like the edges of my day had been given a nice cannabidiol-influenced buffer thanks to the peculiar lack of aching in my soles, I decided that a placebo effect had to be at work.

Day 2 arrived, then days 3 and 4 — and, with each, my own 5-inch platform knee-high boot or my vampish skyscraper pump. Every morning I would begin with trepidation, and each evening I would exhale with surprise.

Over time, my perception of shoe-related foot pain gradually shifted; while I was aware of the sensation and cause, I wasn’t thinking much about either by the end of the day.

Bottom line: My feet really did not really hurt. The worst they felt was a little sore. “I think it’s working!” I said all week to everyone who would listen. Mostly, they laughed and gave me looks that said: Are you actually high?

I didn’t care. Because I was: by at least three inches.

Elizabeth Paton is a reporter for the Styles section, covering the fashion and luxury sectors in Europe. Before joining The Times in 2015, she was a reporter at the Financial Times both in London and New York. @LizziePaton