One of high jewelry’s iconoclasts is moving on to new adventures.

For two decades Suzanne Syz, the Geneva-based designer, has made what she describes as “jewelry for people who don’t take themselves too seriously.” Her witty and offbeat creations have included rings that look like a black and white bull's-eye (with a dart), surrealist timepieces and a hashtag-themed cuff.

A year ago, she decided she would call it a day when she completed her 1,001st piece.

Those earrings, in pink titanium set with colored sapphires, just emerged from the atelier. And they’re already spoken for.

“It’s always difficult to find an elegant ending,” Ms. Syz said in a telephone interview from her home in Geneva. “When you do things with passion, you’re never really ready to stop.” (As for her age, she would say only that she is in her 60s.)

In 2001, Ms. Syz began designing jewelry because she felt the styles of the day lacked whimsy. “I thought it would be fun to wear things that were colorful, original and not too serious, but were made of serious materials,” she said.

Working with Geneva-based artisans, she produced a few pieces and wore them. Then, at a dinner party in 2005 in Los Angeles, she caught the eye of the guest of honor, the most glamorous and voracious jewelry lover in Hollywood.

“I was seated across from Elizabeth Taylor, and she kept staring at me,” Ms. Syz recalled. “I thought something was wrong.”

After dinner, Ms. Syz said, the actress apologized and asked who had designed her triple-strand turquoise and purple sapphire necklace. Ms. Syz sold it to her the next morning. 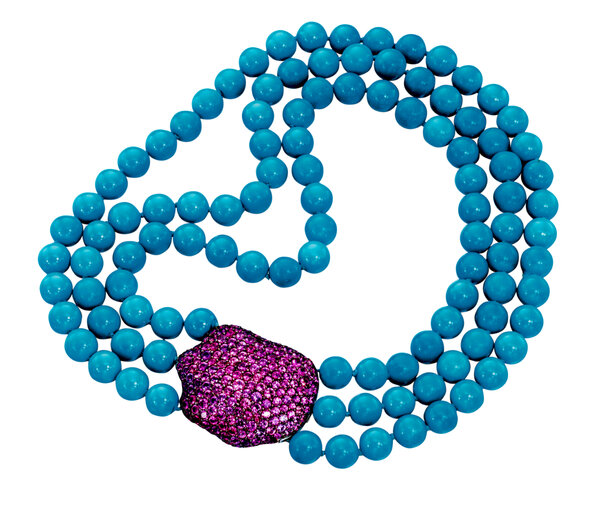 “It was a lucky start,” she said. Word of mouth took care of the rest.

Ms. Syz has long been a collector of contemporary art, so, taking inspiration from her insider status in the 1980s, her designs riffed on what she had learned from friends like Andy Warhol, Jean-Michel Basquiat and Julian Schnabel. She injected her one-of-a-kind pieces with a Pop color palette that would, as she put it, “take the serious out of the stone.”

The candy colors appealed to June Noble Larkin Gibson, the Life Savers heiress, who bought more than one pair of the earrings that Ms. Syz first dreamed up when she got snowed in for hours at LaGuardia Airport: earrings depicting the candy in gold, aluminum or enamel with diamonds.

To bring diamonds down a notch, Ms. Syz set them in colored titanium — or in glossy ceramic, long before that material gained currency in high jewelry spheres. “It makes them easy to wear, because it looks like fashion jewelry,” she said of a ring in white ceramic with tiny fancy diamonds that she made for herself.

“Suzanne’s atypical: She has a funky chic,” said Michèle Heuzé, a jewelry historian who met the designer while working as a scientific adviser for the 2017 “Medusa” exhibition at the Museum of Modern Art in Paris. It included a Syz bracelet made of her dogs’ portraits connected by bone-shaped links.

“There’s lyricism to her color choices; her pieces have sensuality but also a sense of freedom,” Ms. Heuzé said. “It’s rare that a designer translates such a zest for life.

“With Suzanne, it’s Champagne all the way. She creates a very interesting artistic environment, and her humor speaks to all generations, which also is highly unusual,” she added.

Ms. Heuzé expects that Ms. Syz’s zanier pieces, and particularly the display units that she commissioned from artists, will be in demand by collectors — and not just those who focus on jewelry.

“She worked with artist friends to create a whole environment for art shows,” Ms. Heuzé said, referring to artists like Sylvie Fleury and Alex Israel. “Those objects were really for insiders.”

Her work also has been added to museum collections, like her fruit basket earrings, titled Panier and produced in 2018, displayed in the jewelry gallery at the Musée des Arts Décoratifs in Paris.

Ms. Syz said she decided to stop at 1,001 pieces for its symbolic “connection with eternity,” and also as a tribute to the number of pieces that Mr. Basquiat, a close friend, produced before his death in 1988.

“You have to live with the times,” she said. “The world has changed, and I don’t think things will go back to the way they were before. As you get older, you want fewer things. The only thing I feel really indulgent about now is art, because I am a fanatic collector.”

But while she is closing a chapter in jewelry design, Ms. Syz is pursuing a new one — in organic viticulture.

In 2007, an inheritance from her father allowed her to buy a run-down estate in Tuscany called La Fattoria di Caspri, where she set about producing small batches of biodynamic wines. Earlier this year, her 2018 Luna Blu vintage, which has the Demeter biodynamic certification, received a rating of 94/100 from the wine expert James Suckling. She also produces olive oil.

Ms. Syz said her new focus was more of a segue than a radical change.

“The earth is the constant,” she observed. “Jewelry is about bringing things to life and sharing beauty. With winemaking, when you see the harvest in September, it’s so fulfilling. When you give to nature, it just gives so much right back.”