Zara McDermott ignored speculation she has reunited with her ex-boyfriend Sam Thompson as she took to Instagram on Wednesday to share a racy lingerie snap.

The Love Island star, 23, posted the photo just hours as she was spotted leaving Sam’s London home at 9am in his purple hoodie and grey joggers.

This is the latest twist in their saga after Sam, 28, said on Made In Chelsea their 16-month relationship was well and truly over, following revelations she had cheated on him while she was on Celebrity X Factor last year. 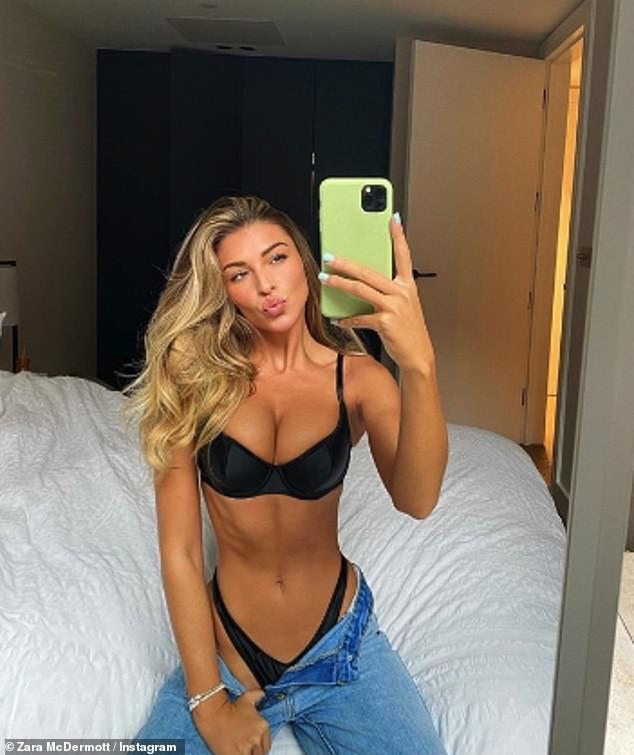 Defiant: Zara McDermott ignored speculation she has reunited with her ex-boyfriend Sam Thompson as she took to Instagram on Wednesday to share a racy lingerie snap

The reality star looked incredible as she showcased her gym-honed physique and ample cleavage in the black bra and matching thong.

She teamed the look with jeans which she wore partially undone, seductively pulling them down for the camera.

Zara also shared a snap of her toned abs on her Stories after completing a workout in a black crop top and lilac leggings. She captioned the photo ‘Dead’. 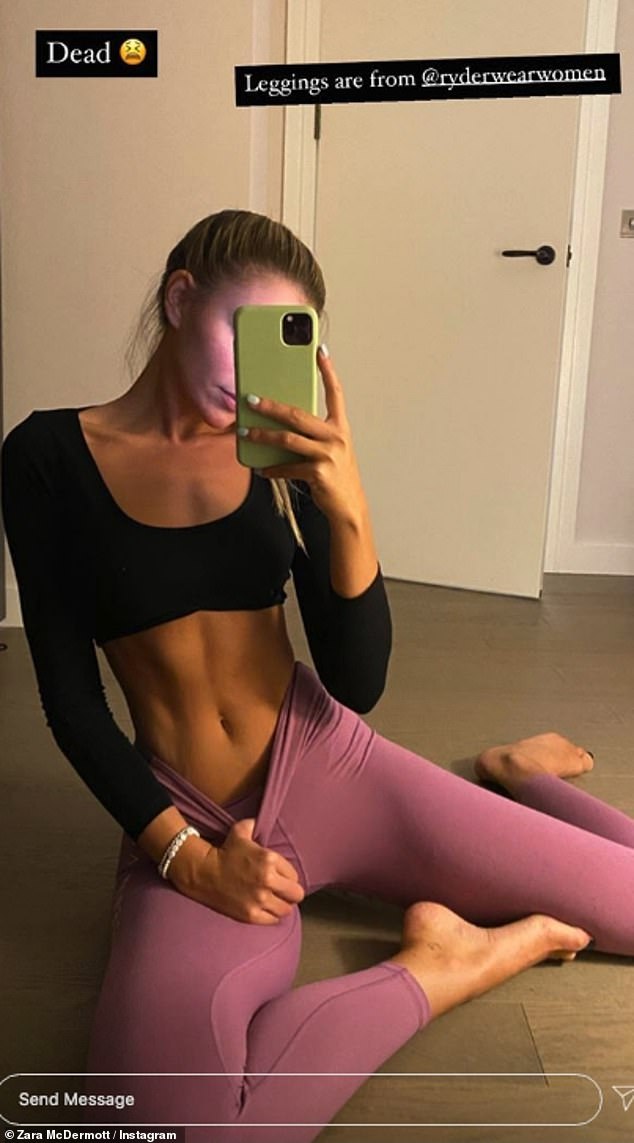 Back to her best: Zara also shared a snap of her toned abs on her Stories after completing a workout in a black crop top and lilac leggings. She captioned the photo ‘Dead’ 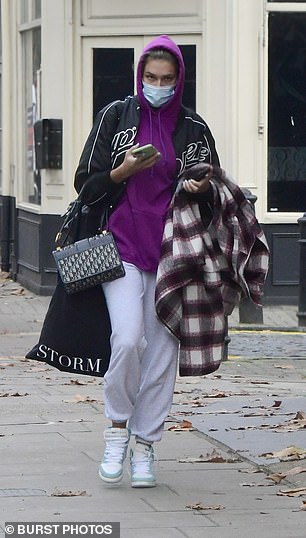 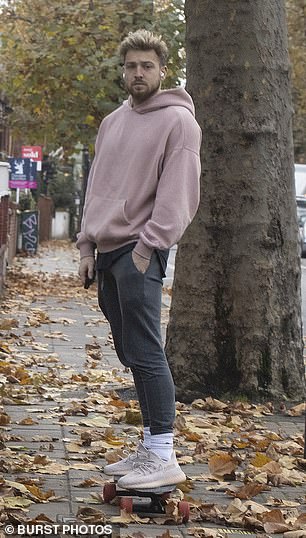 It’s back on! The Love Island star, 23, posted the photo just hours as she was spotted leaving Sam’s London home at 9am in his purple hoodie and grey joggers 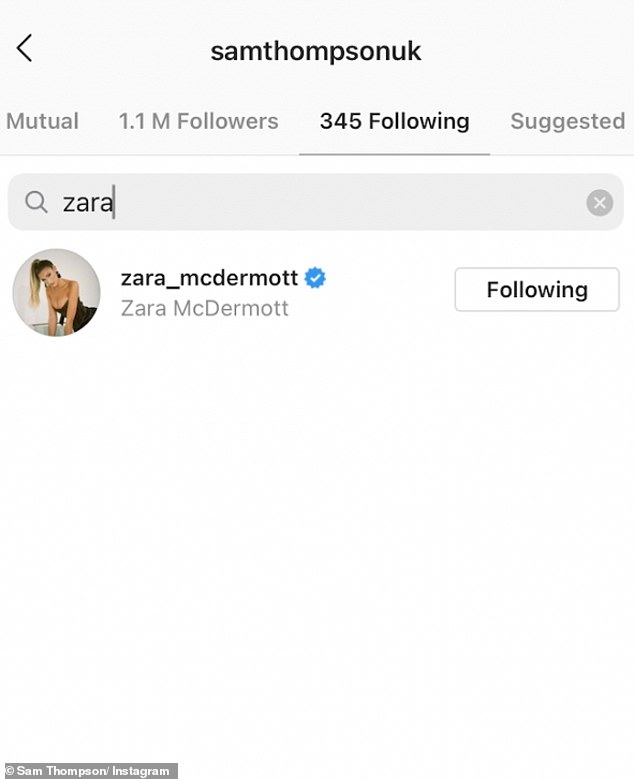 Refollowed: Following their split Sam unfollowed Zara on Instagram and publicly ignored her several declarations of love, however he has now opted to refollow her

Despite announcing plans to head over to Los Angeles to pursue her modelling career, the pandemic has forced Zara to remain in the U.K.

The racy snaps come hours after Sam re-followed Zara on Instagram, seemingly confirming things are back on track.

Zara tried to make a coy exit from Sam’s house, carrying the plaid shirt jacket she was pictured wearing during a meet up with Sam last week, as they filmed their final scenes together for MIC before the current series draws to a close.

Rekindled: Sam called it quits with Zara, after he learned she had cheated on him with a colleague while appearing on X Factor: Celebrity last year

He was riding a skateboard and listening to music through his AirPods.

MailOnline have contacted Sam and Zara’s representative’s for further comment.

Following their split Sam unfollowed Zara on Instagram and publicly ignored her several declarations of love, however he has now opted to refollow her, adding to suggestions that they are back on.

The meeting came as the former couple sparked speculation that they’ve secretly reunited as reports claimed that ‘word amongst their inner circle was they are back together’.

Tearful: The break-up has played out during recent episodes of Made In Chelsea (pictured in the MIC episode when she admitted she had cheated on Sam)

They were said to have enjoyed a roast with their friends, and a source told The Sun: ‘They were all having such a nice time that one got carried away and uploaded a post with Sam and Zara in it, forgetting that they’re not officially together.

‘The friend soon realised their mistake and deleted the post before it drew too much attention. The word amongst their inner circle is they’re back together, but to the public it’s a different story.’

Since then, the blonde revealed she won’t be quitting MIC at the end of the current series, despite recently telling her pal and Sam’s ex Tiffany Watson she plans to move to Los Angeles to pursue her modelling career further.

During last week’s episode of Made In Chelsea, Sam was visited by his pal Reza Amiri-Garroussi who came bearing a letter from Zara.

On the break up, Reza said: ‘Got to say though after meeting her, I did feel bad for her. She’s in a bad way. It’s a s*** situation for everyone involved. But she really is upset. Legit.’

Sam then broke down while reading out the letter from Zara, which read: ‘Dear Sam, since you’ve been away I’ve been doing a lot of reflecting on a lot of things. I’ve reflected on my life and our life together and also the kind of life I want to live…

Love lost: Sam was left devastated after learning of the tryst which happened when she took part in X Factor: Celebrity in 2019 [pictured], with Zara still liking the guy’s Instagram snaps

‘Before I continue with some of the things I need to say, I just want to tell you again I am sorry with my whole entire heart for what I did….

‘I’m so deeply ashamed of my actions and the way I hurt you. I was selfish, immature and stupid. There is no excuse.’

After his meeting with Sam, Reza then reported back to Zara that Sam is ‘completely out,’ despite her attempts and letter to win him back to which she started crying. However these new snaps tell a different story.

Over the weekend, Zara shared an impassioned throwback post of her and Sam kissing, which read: ‘I choose you. And I’ll choose you over and over. Without pause, without a doubt, in a heartbeat. I’ll keep choosing you’.

The post comes after Sam mocked the moment Zara begged for his forgiveness on TV in a now-deleted video, before later apologising for causing any offence and insisting he asked for her permission.

‘Hasn’t been easy’: The pair called quits in September just weeks after enjoying a loved up holiday in Mykonos and Zara has been grovelling for forgiveness ever since