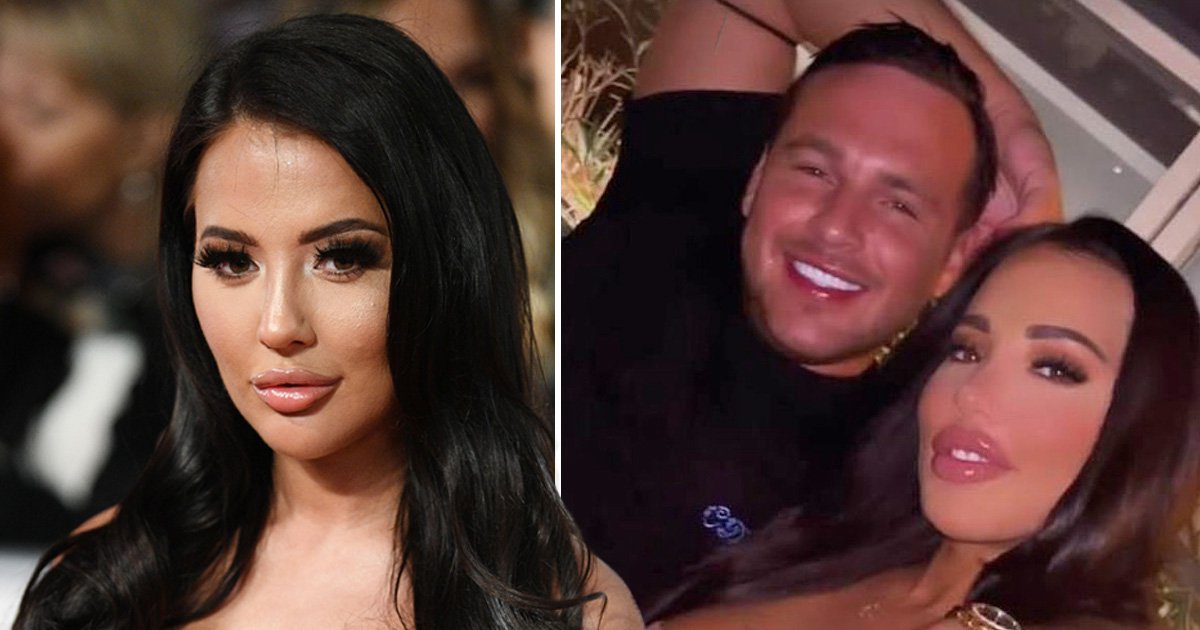 Towie star Yazmin Oukhellou has spoken out after being involved in a car crash which claimed the life of Jake McLean.

The reality star was rushed to hospital with injuries from the crash earlier in July, with boyfriend McLearn believed to have been driving at the time.

They were in Turkey where their Mercedes went over a 70ft cliff – despite the best efforts of emergency services, McLean’s life could not be saved.

Yazmin, 28, was pictured after arriving home, wearing a sling as she recovered from the suffered serious injuries to her arm.

She has now revealed how she ended up in a sling, as she was forced to break her own arm in a bid to escape the vehicle.

Speaking to The Sun, she said: ‘It was lay there and bleed to death, or snap my own arm to try to save us.’

Yazmin – who had fallen asleep in the car after a party with friends that night – said it felt like the car was ‘just tumbling for what seemed like forever’, as she felt like she was ‘going round in a washing machine’.

‘Then eventually it stopped and my right arm was jammed.

‘The car was upside down. It had an open sunroof and my right arm was just stuck behind my back and under the folded back of the car roof.

‘I tried to honk the horn with my foot and I couldn’t do.’

Continuing to recall details of the horrific accident, she said she could feel her arm ‘absolutely covered in blood’, as it felt like she was ‘lying in a hot bath’.

Unbeknownst to her at the time, the crash had opened an artery.

‘At the same time I was trying to wake up Jake,’ she said.

‘In my head I told myself, “Ok, he’s just unconscious, I’m alive so he must be alive”.

‘I didn’t want to admit it to myself that he could be dead.’

Yazmin felt like she ‘had no choice’ but to snap her arm ‘through pure adrenaline and panic’, so she was able to climb out of the car ‘holding my arm together with my left hand’.

‘I ran up to the top of the bank, I was screaming for help and then all of a sudden I saw a flashlight.

‘I half thought, “Oh my God, am I hallucinating,” because we were in the middle of nowhere. I thought I was seeing the light and I was dying. I just don’t know how I did it. I think it was just pure adrenaline, I barely thought.’

Yazmin came across a man who was walking his dog, with the stranger taking off his top to wrap it around her arm.

She assured him that he shouldn’t worry about her, hurrying him down to help her boyfriend.

‘I climbed back down and tried to check his pulse but I couldn’t feel anything and then the ambulance came.

‘They were helping me. I was like, “Please can you just help him”, and they were like, “We just need to take him to another hospital”.’

McLean, 33, was declared dead while she was raced to hospital.

He had an on-and-off romance with Yazmin for years, leading to her flying out to Turkey while he was there with friends, wanting to reconcile with him.

Sobbing through her interview, she remembered their night before the crash as ‘amazing’, adding: ‘Things were perfect — just as I’d hoped they would be.’

The TV star added that it was her boyfriend who ‘insisted’ on driving ‘high up in the mountains’, but falling asleep in the passenger’s seat probably saved her life.

Doctors told her that, because her body was more relaxed, she survived.

‘I severed an artery and a nerve, that’s why I bled so much. The doctors called me an angel, a miracle, because it’s a notorious spot and people have never survived. Now I’m just wondering how the hell did my partner die while I’ve survived? It’s made me look at life totally differently.’

Yazmin is going to have therapy ‘for a while’ to process the traumatic events, as well as some in-patient treatment.

‘I know this will live with me forever, I need to take it slowly.’