And despite not being home for long, the voluptuous model already has her sights set on her next round of procedures.

In a series of videos on Instagram, the 25-year-old said that she wants to lose weight and turn into a ‘stick with balloons’ after being inspired by some skinny Russian women she saw while getting surgery in Turkey. 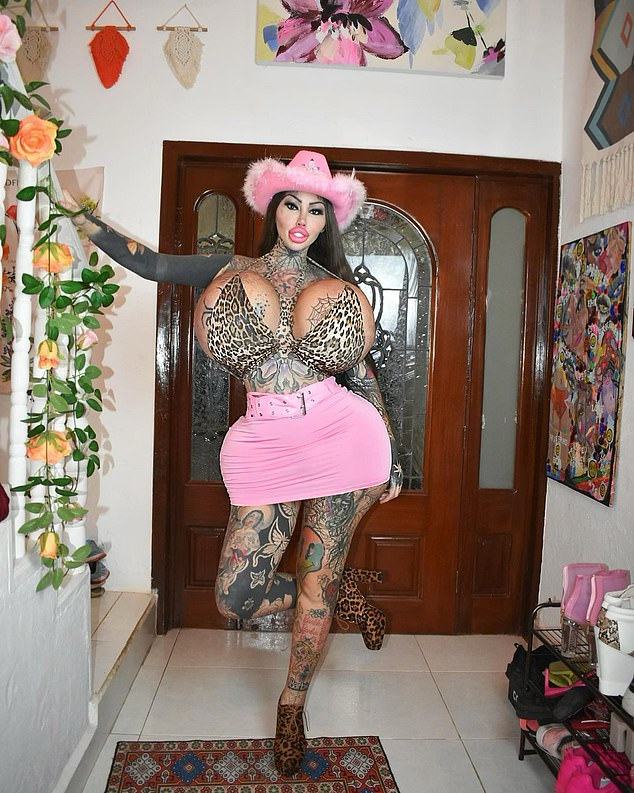 Transformation: Social media star Mary Magdalene (pictured) wants to lose weight and increase the size of her breast and butt implants so that she can look like ‘a stick with balloons’

‘I wanna be really skinny,’ she said while filming herself in the mirror of her home.

‘When I was in Turkey, there’s a lot of Russian people there and they just looked so hot, like a noodle,’ she continued.

‘I’ve never seen that type of body in person. Here, that’s not popular, but there, wow. It’s something else that’s way hotter.

‘And then imagine with my big t**s and my fat a**, which I’m gonna make bigger, I’ll literally be like a stick with balloons.’

She added: ‘I’m already pretty skinny, but like, I just wanna look really bony. I love that, that’s so hot.’ 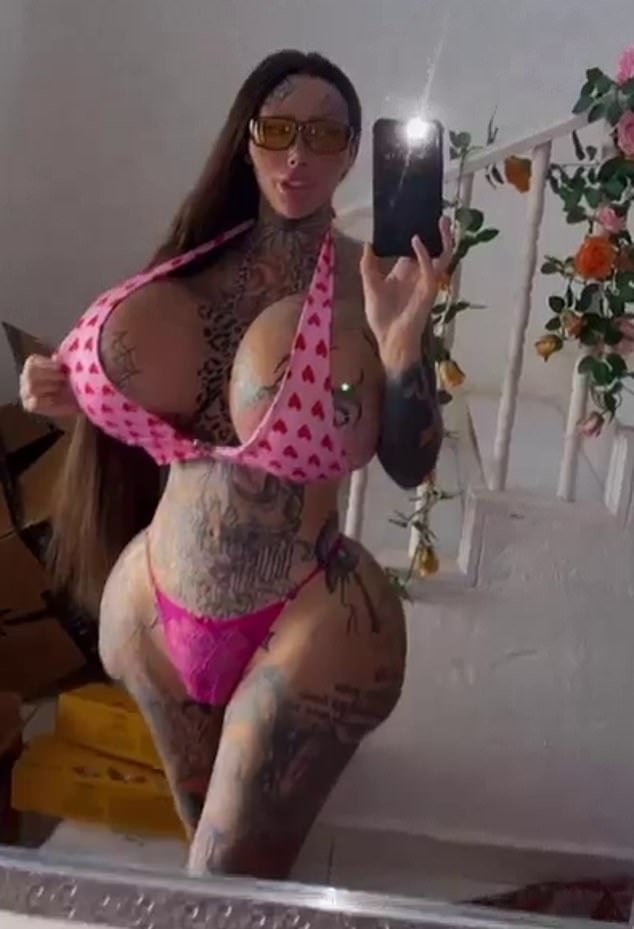 Changes: ‘I wanna be really skinny,’ she said while filming herself in the mirror of her home, after revealing that she’d been inspired by some slim Russian women she saw in Turkey

Mary returned home from Europe last week and has been busy flaunting the results of her latest surgeries on Instagram.

The American model now sports a tiny, upturned nose, after getting her fourth rhinoplasty to achieve what she has dubbed a ‘Barbie nose’.

She also had cat-eye surgery and had all of her teeth filed down and replaced with porcelain veneers. 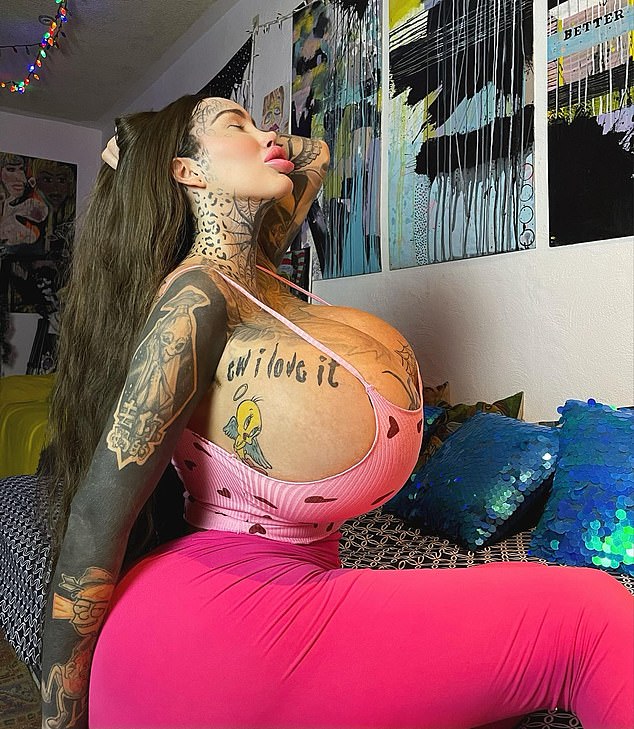 Unstoppable: ‘Imagine with my big t**s and my fat a**, which I’m gonna make bigger, I’ll literally be like a stick with balloons,’ she told fans 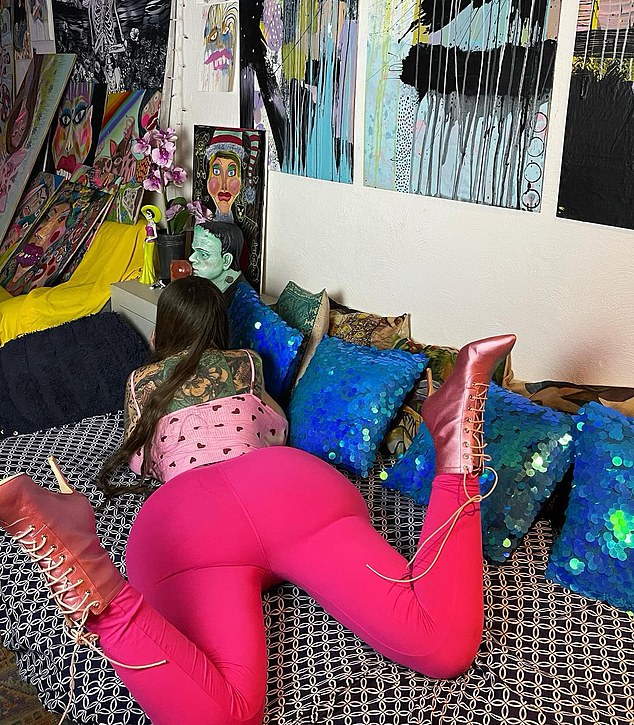 Mary currently boasts ‘the world’s fattest vagina’ after having surgery to inflate it, in addition to size-5000cc breast implants and multiple BBLs and butt implants.

She became a social media sensation in 2018 after she revealed that the operation to enlarge her vagina almost killed her.

‘I almost died during [the] procedure. I had to get two blood transfusions. The doctor said I was losing so much blood, and turning very pale. He thought I was going to die,’ she previously told The Sun. 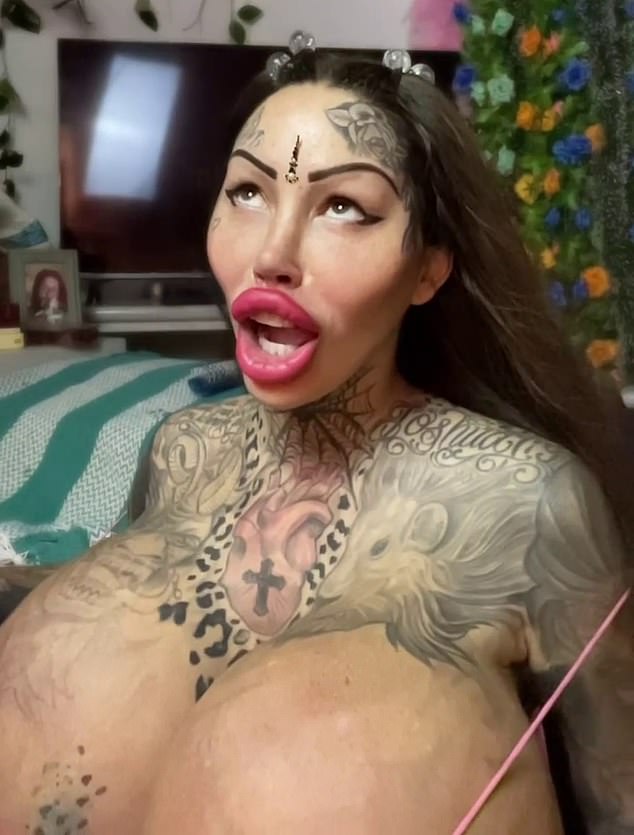 Unnatural: The 25-year-old recently returned from Turkey after undergoing cat-eye surgery, a fourth nose job and a dental procedure (pictured post-surgery this week) 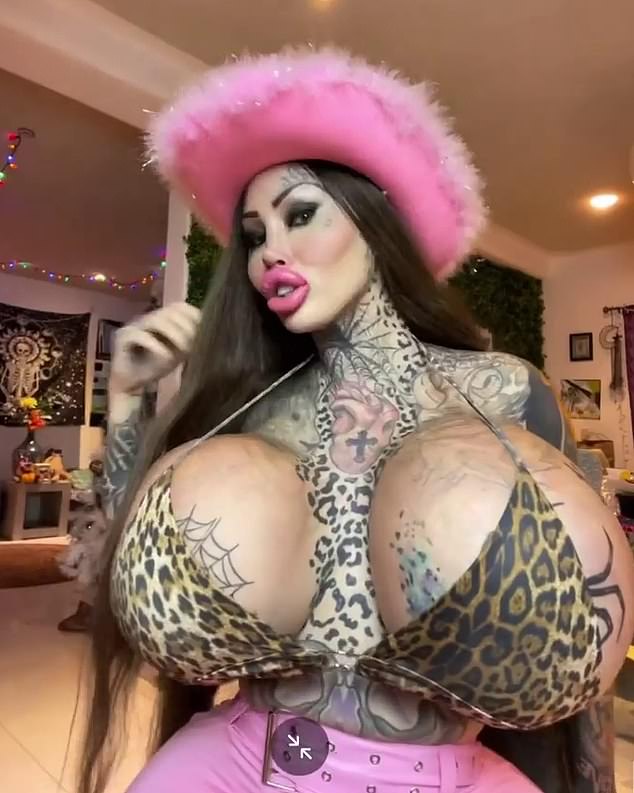 Showing off: Mary has been busy showing off her latest surgery on Instagram (pictured)

The heavily tattooed model had her first procedure done at the age of 21, when she was working as a stripper and escort.

In an interview with The Sun this week, Mary compared her love of surgery to ‘extreme sport’.

‘Plastic surgery is my extreme sport… a hobby,’ she said. ‘Many people are addicted to their hobbies [but] I think as long as I’m not hurting anyone and it makes me happy, there’s nothing wrong with it. 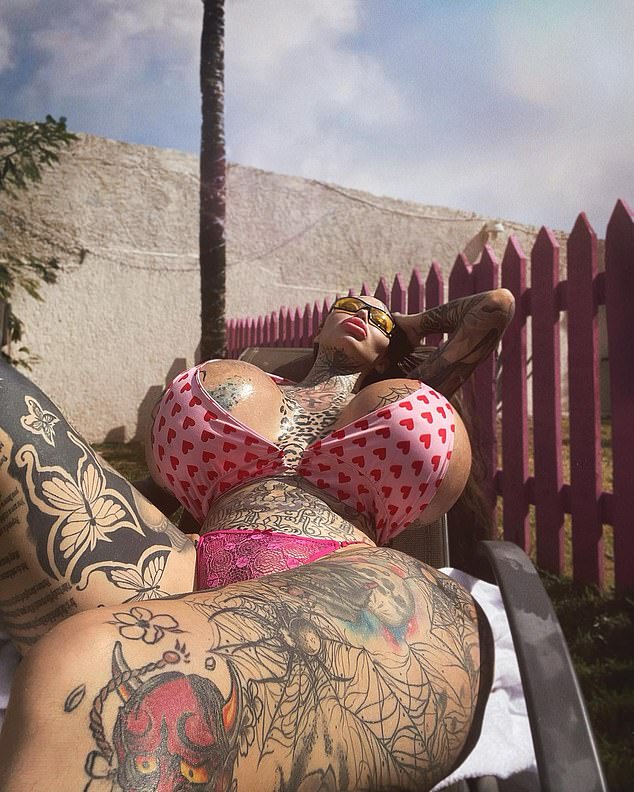 Bigger is better? Mary currently boasts ‘the world’s fattest vagina’ after having surgery to inflate it, in addition to size-5000cc breast implants and butt implants

‘People put themselves in danger hiking in the mountains because they love their support,’ the social media star continued.

‘I am okay taking some risks and hiking into the plastic surgeon’s office because that is one of my hobbies and I’m very passionate about it.’

In a recent post, an emotional Mary detailed how her plastic surgery makeover had changed her life.

‘The old me was always sad and lost, thought I wasn’t good at anything and did not have much hope for the future,’ she said. 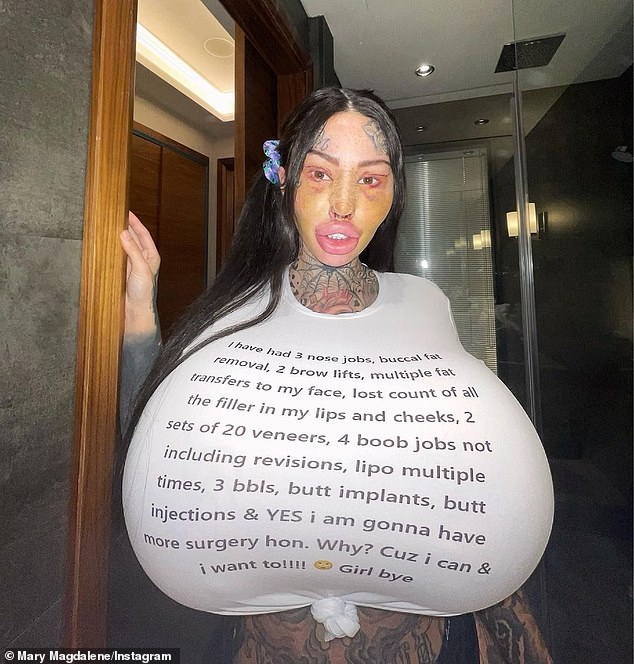 Battered and bruised: Mary posed for a selfie shortly after her nose job and cat-eye surgery in Turkey earlier this month 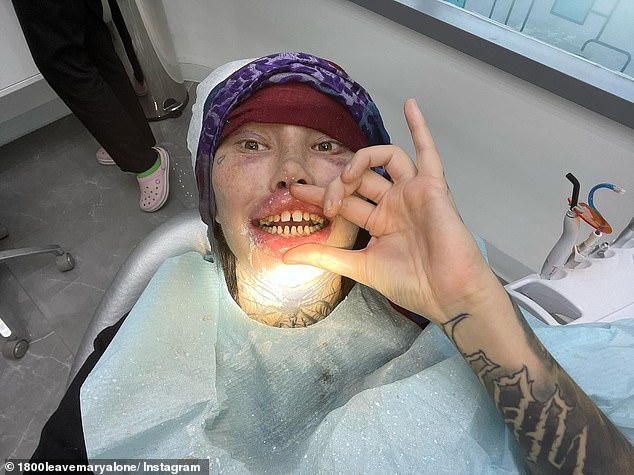 What teeth? The former stripper also had her teeth filed down so that she could get porcelain veneers in her mouth

‘When I’m crying now it’s because I feel happy and proud of myself and I feel like this surgery was really just fully saying goodbye to the old me now because now I no longer see any of her at all.’

Mary, who grew up as a devout Christian, previously had more than one million followers on TikTok before her account was deleted for violating content guidelines.

She now works as an OnlyFans performer and professional artist, selling colourful self portraits online to fans and art lovers. 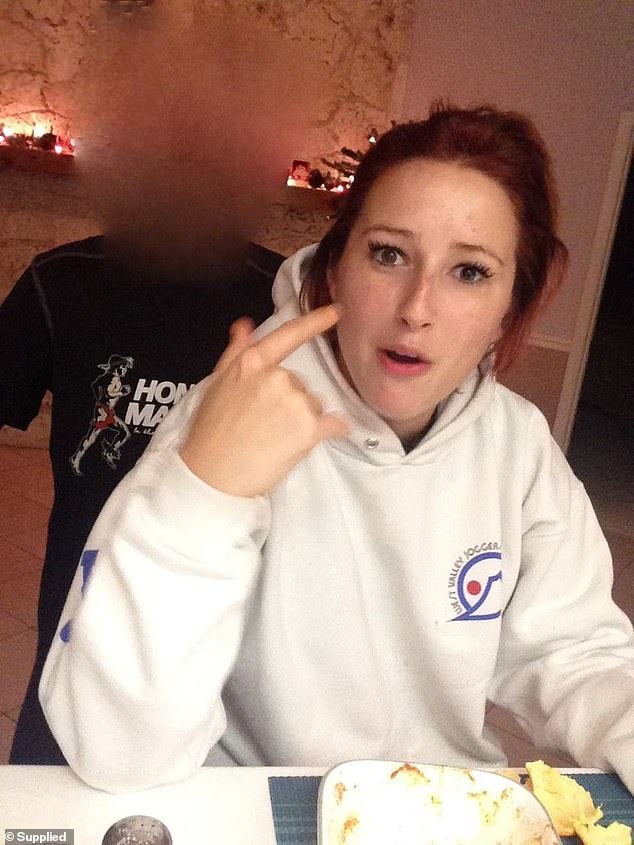 Flashback: Mary, who grew up as a devout Christian, is pictured before her surgery 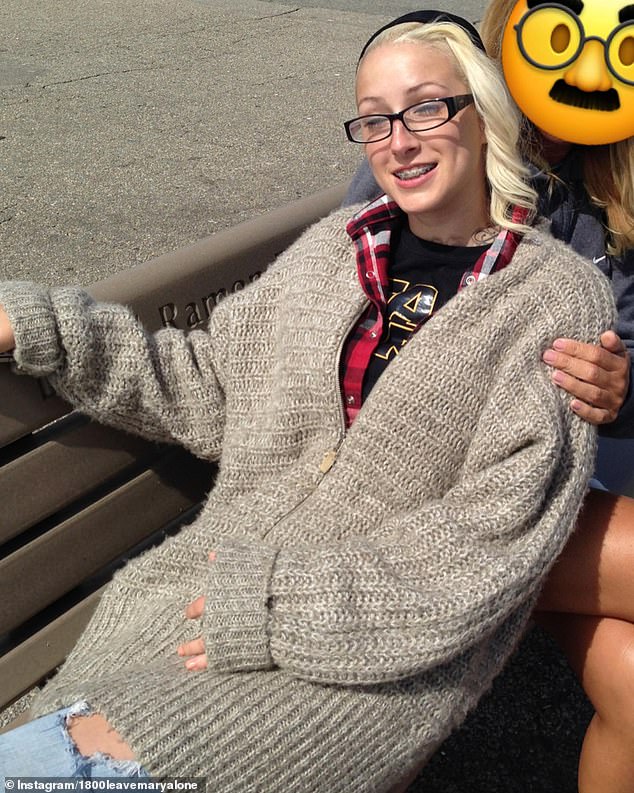 Innocent: A much younger Mary with blonde hair and braces is pictured years before her surgery transformation