On Sunday, Naomi Osaka, the No. 2 ranked tennis player in the world, announced she was withdrawing from the French Open. This came after she paid a $15,000 fine for not participating in the tournament’s press junkets due to the impact they had on her mental health. In a social media post she wrote that she was going to “take some time away from the court now, but when the time is right I really want to work with the Tour to discuss ways we can make things better for the players, press, and fans.”

While her withdrawal was applauded and supported by many, including other prominent professional athletes, it also drew swift criticism. Professional provocateur Piers Morgan said Osaka “got what she wanted: no more criticism, only praise.” Gilles Moretton, president of the French Tennis Federation, described Osaka’s decision to refrain from participating in post-match press conferences “a phenomenal mistake.”

Osaka’s decision is nearly unheard of in the realm of professional sports, but a woman—especially a woman of color—being punished professionally, financially, and in the court of public opinion for drawing boundaries that benefit her is hardly new. From the moment we women exit the womb, we are bombarded with messaging that tells us our bodies and minds are not ours, that they exist for the entertainment, consumption, pleasure, and benefit of others. And if we restrict that access, there will be consequences. 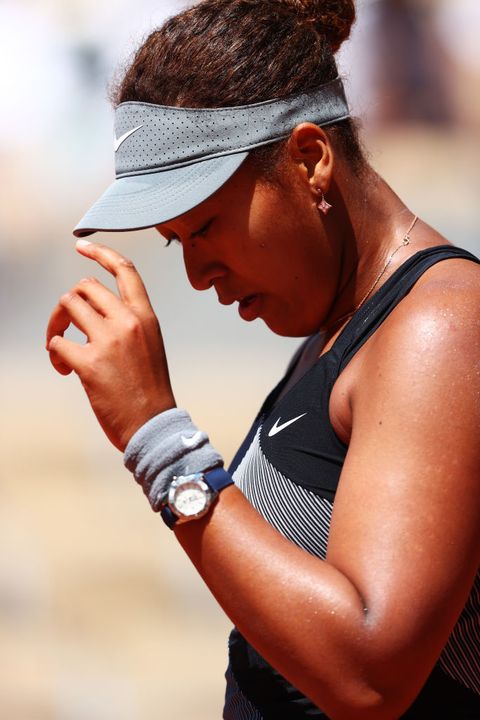 We’re told our bodies should be a certain size—not too thin as to draw faux concern but not too big as to take up space. If necessary, we should restrict our food and deprive our bodies of the pleasure of eating. After all, don’t we have some self-respect?

We should wear clothes that are appealing but not too revealing; not cover up too much as to appear prude but not show too much skin that we distract boys from their learning or men from their wives or coworkers from a meeting that, yes, could have easily been an email.

Our hair shouldn’t be “too short” lest we appear ambiguous or, even worse, masculine. If you’re Black, your hair should be pressed and straightened, sleek but not too oily. After all, dreads or braids “aren’t professional.” We should be conventionally attractive but refrain from wearing “too much” makeup or, even worse, choose to use botox or fillers or undergo any procedure that helps us inch ever-closer to society’s unattainable, white-centered benchmark of “beauty.”

In Texas, lawmakers want to give people who choose to have an abortion the death penalty, because in “the land of the free” there are those who would rather see us killed than live under a government that does not have a right to force us to give birth.

Sex is not for pleasure but for procreation, and it certainly isn’t something we should openly enjoy simply because it feels good and we like it and our sexual identity is ours to own and express and explore.

We should love cis men but not too many. We should want children but not too many. If we’re one of the at least 20 percent of new moms who experience postpartum depression, we must hate our child because a mother, above all else, should innately live to sacrifice every part of herself in the name of parenthood.

But above all, we should never—ever—complain about the messages, laws, policies, and unsaid social contracts that tell us our minds and bodies are not ours. We must be seen and not heard, but be OK with the blame of not speaking up sooner or coming forward earlier. Just shut up and dribble, stand and not take a knee, be quiet and play… unless right now is the time others want us to speak.

Osaka has undoubtedly heard these messages before. As a woman of color and a professional athlete, she has arguably heard them more so and on a grander scale than many of us are likely to ever experience. Which is why her decision to say “no”—to draw a boundary—matters. At a time when we’re all coming out of a pandemic that harmed our collective and individual mental health and led to extreme burnout, the ability to set a barrier that protects our bodies and our minds is not applause-worthy—it’s vital.

“It is incredibly important that all human beings, including those in the public eye, are allowed to have and choose their own boundaries and maintain them,” Dr. Jessi Gold, a psychiatrist and assistant professor at Washington University in St. Louis, tells Cosmopolitan. “The thing about boundaries is that they’re individual. I think the way [Osaka’s] decision was viewed showed a really gross misunderstanding of boundaries as they are applied and of the purpose of them, which is to protect the person. Only they can possibly know what they need at any point in time. We should respect that.”

Osaka reminded the world of that very right. It cost her $15,000, a chance at a French Open title, and—despite her efforts to avoid this very thing—tons of negative press. But if she hadn’t taken this brave step and, instead, continued to uphold the status quo, the cost no doubt would have been far more dire.

Maybe, just maybe, one day a woman setting a boundary for herself will cost nothing—the choice as free as we claim this country to be.