Kate Middleton is a busy mother of three, and all of her children are growing up so fast! Of course, with three small children, it can be challenging to figure out the best way to handle different situations that arise, and, as many moms know, parenting isn’t easy! The Duchess of Cambridge has been known to take a practical approach to parenting her children, Prince George, Princess Charlotte, and Prince Louis, and it seems to work for each child, despite their different personalities.

Over the years, Kate has been seen putting her parenting skills to good use in various public situations. For example, during a July 2021 appearance at the Euro 2020 finals in England, Kate and Prince William’s eldest son, George, was taking it all in, and both of his parents used their go-to parenting move when speaking with him, according to PureWow. It appears as though the royal couple use this specific technique whether explaining something to one of their children, answering a question that one of their kids may have, or when it comes to disciplining them. Keep reading to find out what Kate and William continue to go back to when it comes to parenting their offspring. 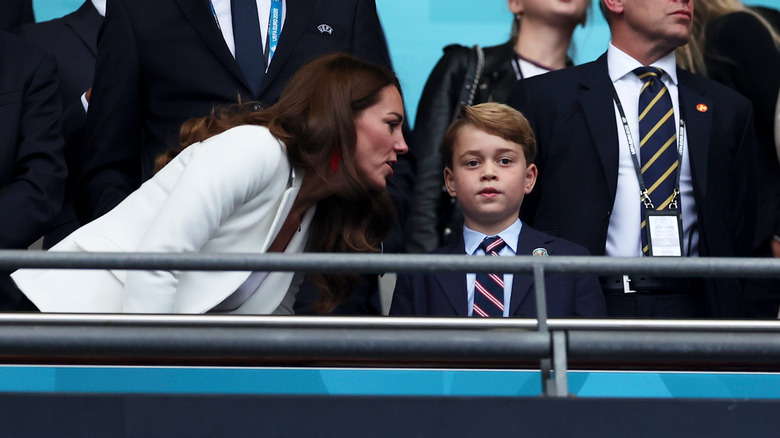 Whether having a conversation that is more friendly in nature or actually discipling her kids, Kate Middleton will often bend down to meet them at eye level — that is, after all, her go-to parenting move. “She understands the importance of being on a level with children and not towering over them. This has been a trend in the last few decades, as psychologists have explained that it has many benefits. It removes the fear of the parent while [utilizing] eye contact and connecting with the child on their level,” parenting expert Martina Mercer told Express back in 2020.

This was indeed the case when Kate shared a word with Prince George while taking in a soccer game. The Duchess of Cambridge could be seen bent over in an effort to be on her son’s level. In another shot, Prince William could be seen doing the same thing, according to PureWow. Based on the photos, it didn’t appear as though George was acting out in any way, and that his parents were simply discussing the game with him, perhaps explaining something that he was curious about. Nevertheless, getting down on his level has been key for Kate — and it’s a pretty great parenting tip!