FIRST LOOK: Vinnie Jones, 56, goes completely bald as he transforms into Albi the Albanian gangster on the set of Law And Order: Organized Crime

He revealed earlier this month that he would be playing Albi the Albanian.

And on Thursday, Vinnie Jones, 56, had gone completely bald to transform into the gangster character to film scenes for season two of Law and Order: Organized Crime.

The Lock Stock actor – who usually wears a flat cap – looked elated as he strolled around on set in New York clad in a tight black T-shirt and plain trousers. 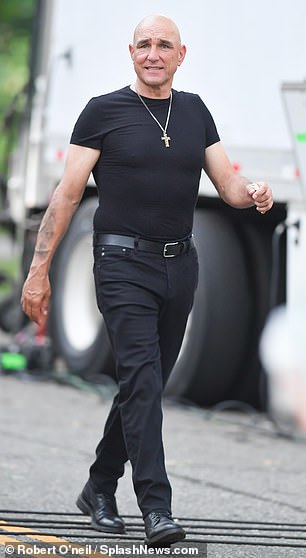 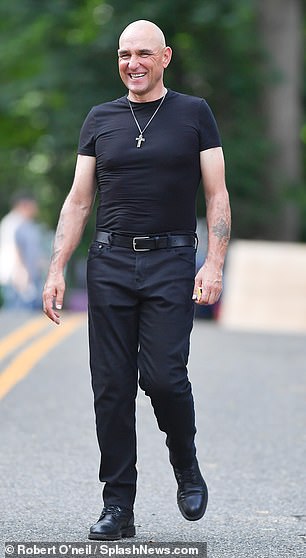 Albi! On Thursday, Vinnie Jones, 56, had gone completely bald to transform into the gangster character to film scenes in New York for season two of Law and Order: Organized Crime

Vinnie’s costume was completed with a smart belt and shoes and an eye-catching chunky silver cross pendant hanging from his neck.

The actor had a laugh when he was later accompanied by a production assistant to a nearby Deli.

According to Deadline, Vinnie’s character, Albi Briscu, is the final remnant of an old-school European crime syndicate.

Earlier this month, the actor tweeted a video clip where he showed off his character’s accent, while thanking his fans for all of their support. 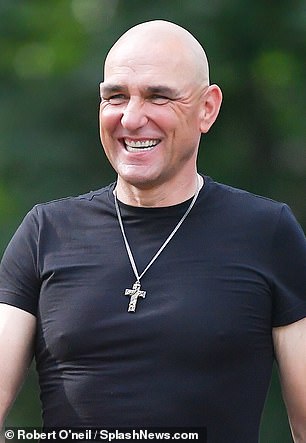 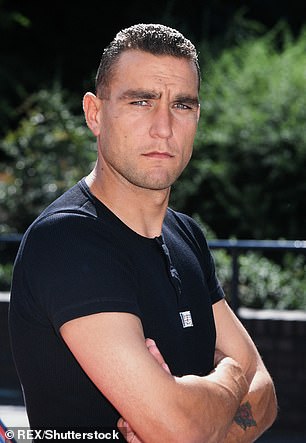 Loving it! Vinnie was clean shaven for his new role and couldn’t stop grinning 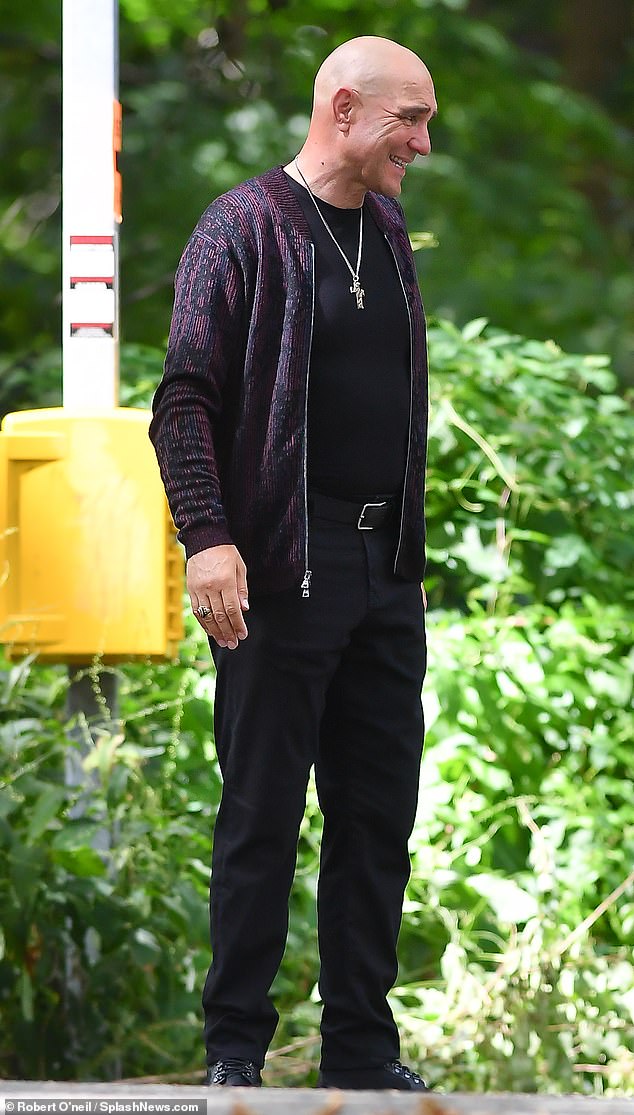 All wrapped up: At once point, he slipped on a purple jacket over his costume 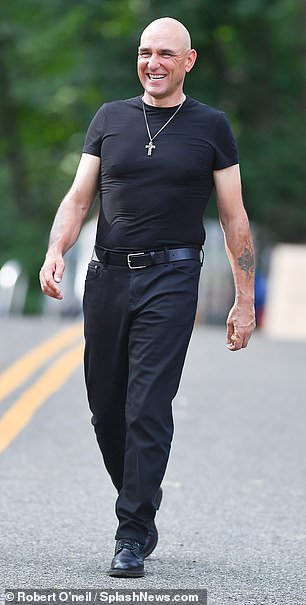 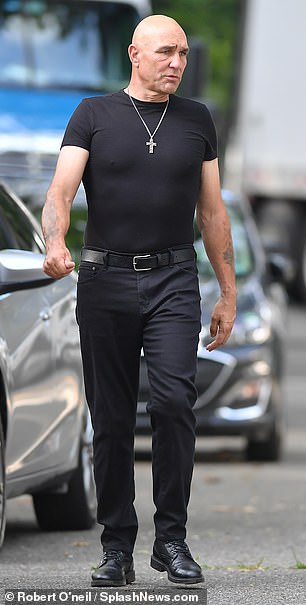 Costume: Vinnie’s costume was completed with a smart belt and shoes and an eye-catching chunky silver cross pendant hanging from his neck 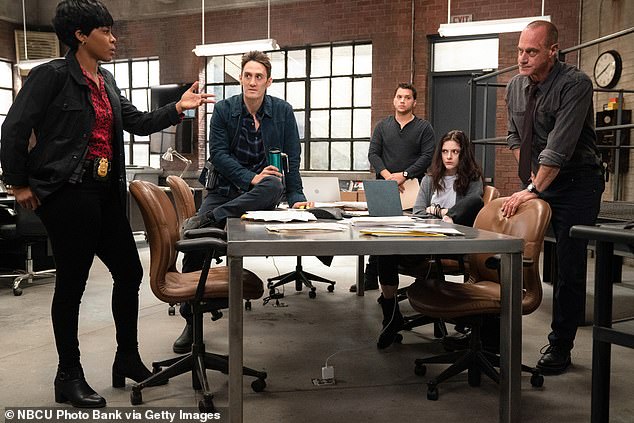 All-star: Vinnie revealed earlier this month that he would be joining Law and Order: Organized Crime for its second series (Cast from series one photographed)

He said: ‘So it’s out now. I’m on Law & Order playing Albi, the Eastern Albanian.’

Changing to his character’s voice, Vinnie continues: ‘So listen to me, make sure that you watch the show. Because there will be some serious repercussions. Looking forward to it.’

Switching back into his regular voice, he concluded: ‘I’ve done a few days already with Chris Meloni. He is absolutely brilliant, absolutely loving it.’

The footballer turned actor lost his wife Tanya in July 2019, when she tragically passed away following a six year battle with cancer. 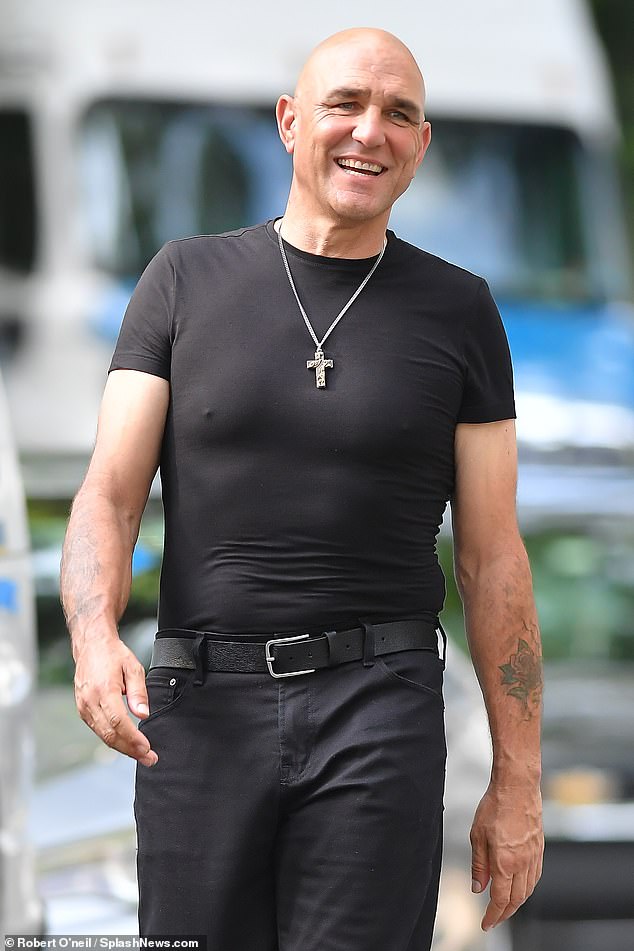 Inked: Vinnie’s arm tattoos were on display thanks to his short sleeve T-shirt 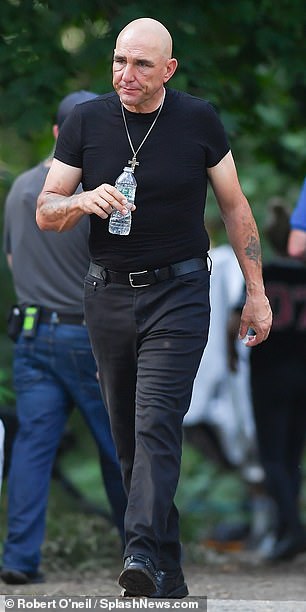 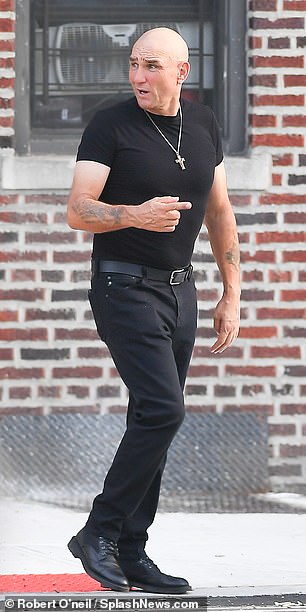 Staying hydrated: The star ensured he sipped from a bottle of water throughout his work day 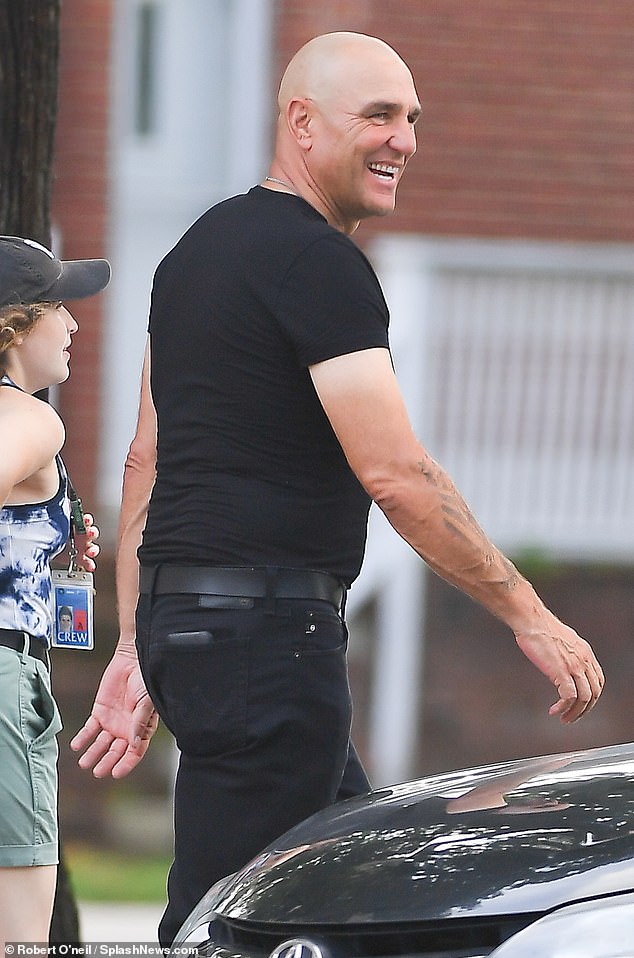 Happy man: Vinnie appeared to be in high spirits while out and about filming on location

Earlier this year, he told the Daily Star: ‘Every morning, I get up, make my bed and have a little chat with Tan about what I’m doing and how much I miss her. Even now it’s one day at a time.’

He opened up to the publication about how he still struggles greatly with losing his beloved partner – who died in their home in Los Angeles.

Vinnie has since moved out of that home and now lives in a home near to his golf club friends at Toluca Lake, adding that he leans on his pals for emotional support.

He said: ‘I see mental health as the hub of a wheel, with lots of spokes. Each spoke represents a different type of issue and mine just happens to be grief. I’m ­coping with the help of my friends. 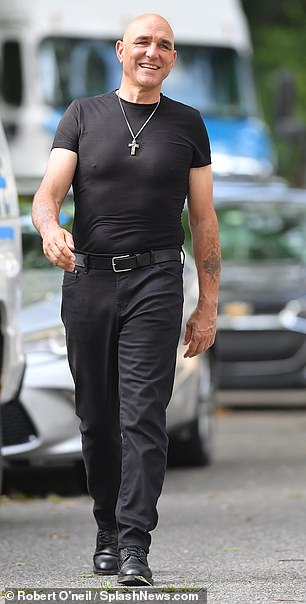 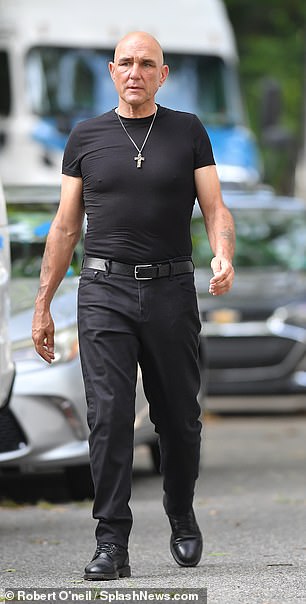 Swagger: The Lock Stock actor showed off his natural swagger as he practiced lines 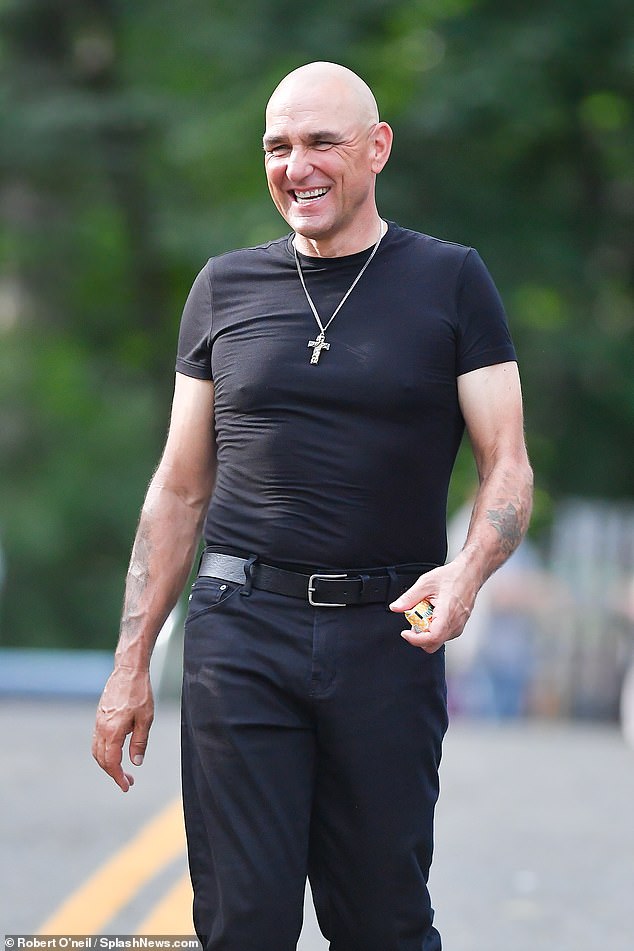 Snack time: Vinnie looked happy to have grabbed a snack during his break 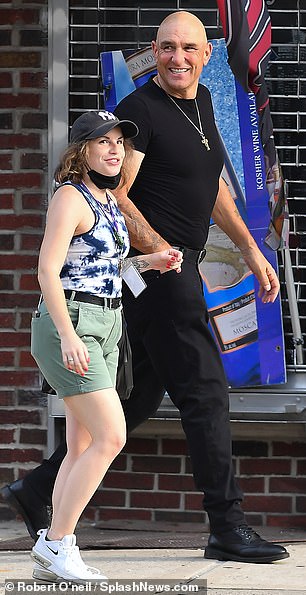 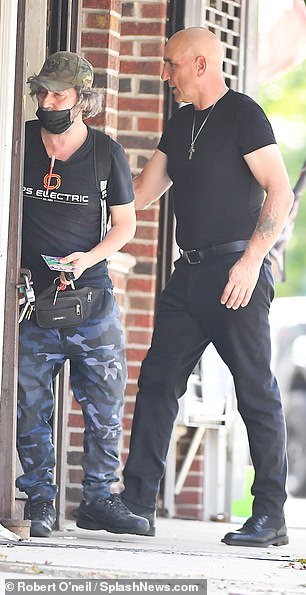 Friendly: The actor had a laugh when he was later accompanied by a production assistant to a nearby Deli

‘I went away with the boys for a quiet break in Canada this summer. We did a bit of fishing and talked. Some of them have been through a lot with alcoholism, something I have struggled with, and they gave me good advice. It was a nice environment to be in.’

Vinnie and Tanya met in childhood before exchanging vows in 1994, with the actor admitting on Piers Morgan’s Life Stories that he will never remarry.

When asked whether he could ever face marrying again, Vinnie said: ‘I think that’s an impossible question to answer but if you asked me if I would get married again that would be an impossibility, she wouldn’t want that.

‘There won’t be another marriage Piers I can tell you that. It was the perfect one and done for me.’ 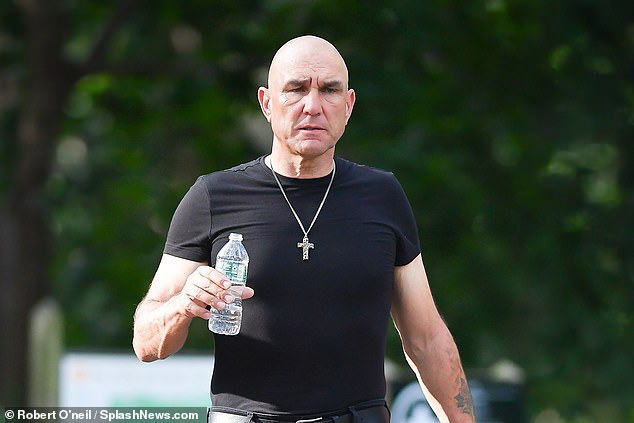 Getting serious: At one point, Vinnie went into focus mode as he had a moment alone