David and Victoria Beckham lounged on a lavish yacht during a sun-soaked trip with their daughter Harper in Miami on Thursday.

The former footballer, 47, and his fashion designer wife, 48, tried to keep a low-profile in black baseball caps.

It comes after Brooklyn Beckham and Nicola Peltz seemed to be making quite the point when they dressed as Romeo And Juliet at a Halloween party – sparking fresh feud rumours. 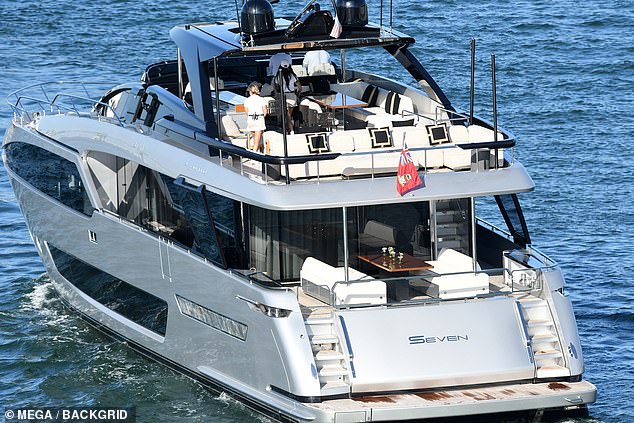 Family getaway: David and Victoria Beckham lounged on a lavish yacht during a sun-soaked trip with their daughter Harper in Miami on Thursday

The couple and Harper were seen riding a golf cart through the marina as they made their way to the ship to enjoy another day at sea.

Victoria sported a pair of oversized sunglasses while her brunette locks blew effortlessly in the wind.

The yacht is estimated at $5 million and named Seven after the England shirt number as well as being the middle name of their daughter Harper.

It measures 28.5 meters and features five cabins that can accommodate ten guests, plus crew members. 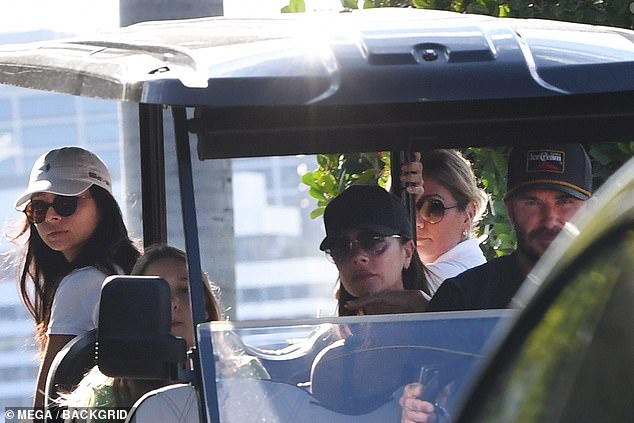 Fun in the sun: The former footballer, 47, and his fashion designer wife, 48, tried to keep a low-profile in black baseball caps while riding a gold cart

It comes after the son of David and Victoria Beckham and his heiress wife modelled themselves on Claire Danes and Leonardo DiCaprio from the 1996 movie, directed by Baz Luhrmann, an adaptation of Shakespeare’s famous play.

Romeo Montague and Juliet Capulet, set in Verona, Italy, is a love story marred by conflict between two noble  families – the Montagues and the Capulets – which mirrors tensions between the Beckhams and Peltzes.

In Shakespeare’s play, the feuding families drive all the major events of the plot and means star-crossed lovers, Romeo and Juliet can never truly be together, resulting in their untimely deaths, after which, both families agree to unite.

In real life, there have been much-publicised tensions between the Beckhams and the Peltzes. The families were reportedly frosty to one another ever since Brooklyn and Nicola tied the knot in April. 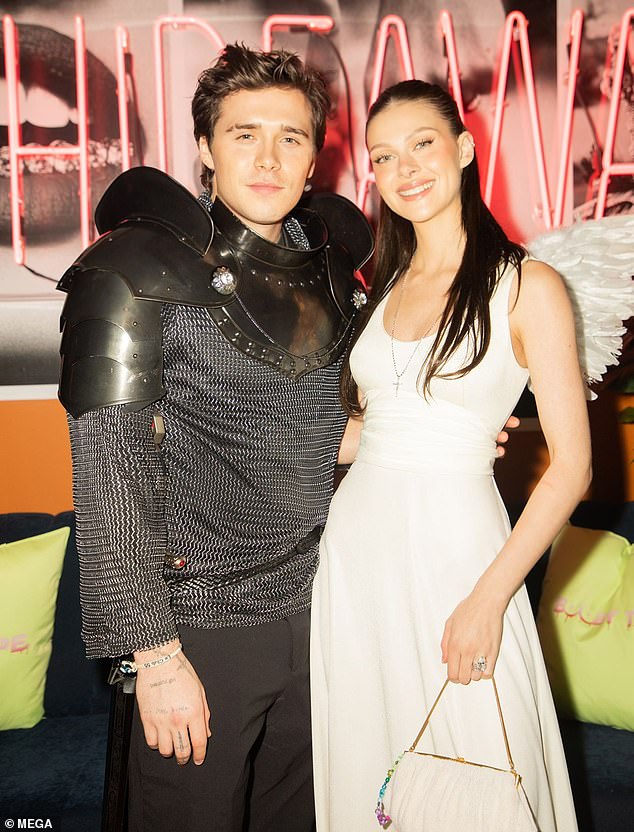 Two households… both alike in dignity! It comes after Brooklyn and wife Nicola attended a Halloween party as Romeo and Juliet – characters from two famously WARRING families – so is that VB feud really over?

The cold war began when Nicola and Victoria Beckham clashed over her wedding dress and the Transformers star accused her new mother-in-law of stealing the limelight at her wedding.

The Beckhams refused to pay for Brooklyn’s US green card, a source claimed at the time and like the Montagues and Capulets, trouble has been brewing between their two houses.

It had seemed like things were back to normal when Nicola and Brooklyn attended Victoria’s Paris Fashion Week show on Friday September 30 – the invite was seen as an ‘olive branch.’ 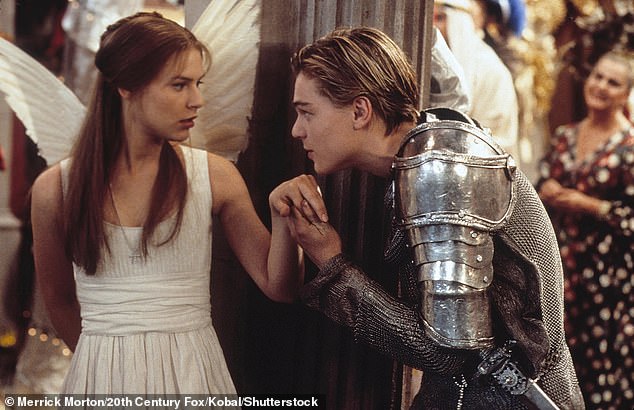 The original star-crossed lovers: The pair went as Romeo And Juliet, mirroring the outfits worn by Claire Danes and Leonardo DiCaprio in the 1996 Baz Lurhmann directed movie

They arrived half an hour early to show their support, with ‘lots of hugs’ going on when they were all reunited for the first time since this summer, said a source in the room.

And video footage taken outside the event showed Victoria laughing with her son Brooklyn, while Nicola socialised with Cruz’s girlfriend Tana Holding and Harper Seven.

But after the couple dressed as the stars from two conflicting households – does this mean the feud has been reignited?

On the night of the Halloween party, Brooklyn sported a metal vest and body armour, which he styled with black trousers as he got into the Halloween spirit for their star-studded party.

He posed for photographs with his arm wrapped around his socialist wife, who looked effortlessly glamorous in a white dress with a fitted ribbon waist and platform heels.

She sported a pair of white wings as she dressed up as an angel for their party, which saw the likes of Ashley Graham, Tyga and Evan Ross attend.

Nicola kept her accessories in a white handbag with a gold strap and accessorised with a silver cross necklace.

She accentuated her natural beauty with lashings of mascara and a slick of peach lip gloss as she flashed a huge grin. 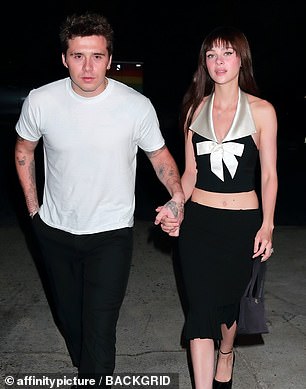 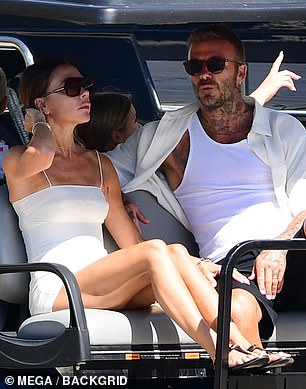 Seems familiar! In real life, there have been much-publicised tensions between the Peltzes and the Beckhams. The families were frosty since Brooklyn and Nicola tied the knot in April