He was accused of causing the mother of his first child enough stress to cause serious pregnancy complications.

Yet Tristan Thompson and Jordan Craig, both 28, seemed to have mended their relationship enough to visit Jamaica with their two-year-old son Prince, according to The YBF.

The former partner of Khloé Kardashian and his previous love have shared photos of their adorable child to their respective Instagrams, though the status of their current relationship is unknown. 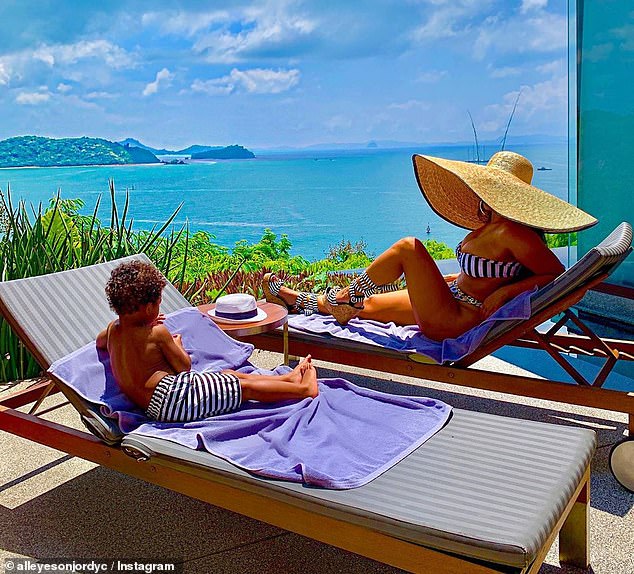 Back together? Tristan Thompson and Jordan Craig, both 28, are vacationing in Jamaica with their son Prince, three, following a messy court battle over child support, according to The YBF

On Saturday, Jordan shared a photo of herself in a striped bikini and a large floppy had that obscured her face as she sunbathed with Prince.

The little boy was dressed in a matching striped swim suit, and the two were photographed in front of a stunning vista with the brilliant aquamarine ocean behind them.

Social media users were quick to comment on her vacation with Prince and Tristan.

‘Waoo! My social media lil friend is so grown. A very handsome young man in the making lol. Prince has more stamps on his passport than me!!!’ wrote one users.

Another fan seemed to be rooting for Tristan and Jordan to get back together: ‘True is not with him; the mother is vacationing somewhere with him and obviously shared his child picture with him. Now he should just marry her, and all will be well with the world.’ 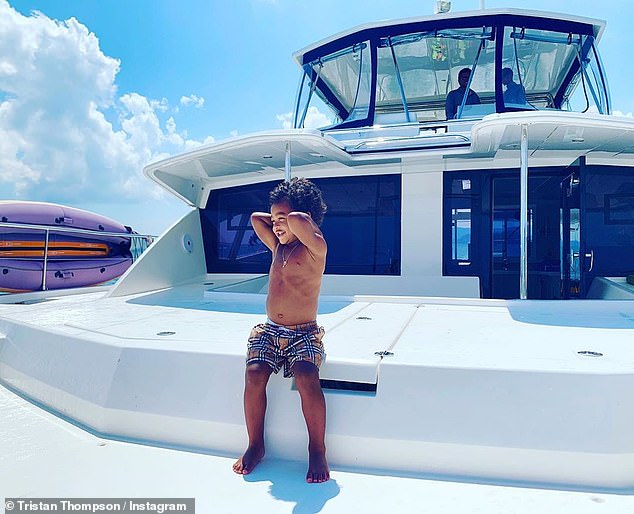 Fun in the sun: Tristan shared a photo of his son looking overjoyed on a yacht, shortly before Jordan posted a photo of herself with Prince in Jamaica 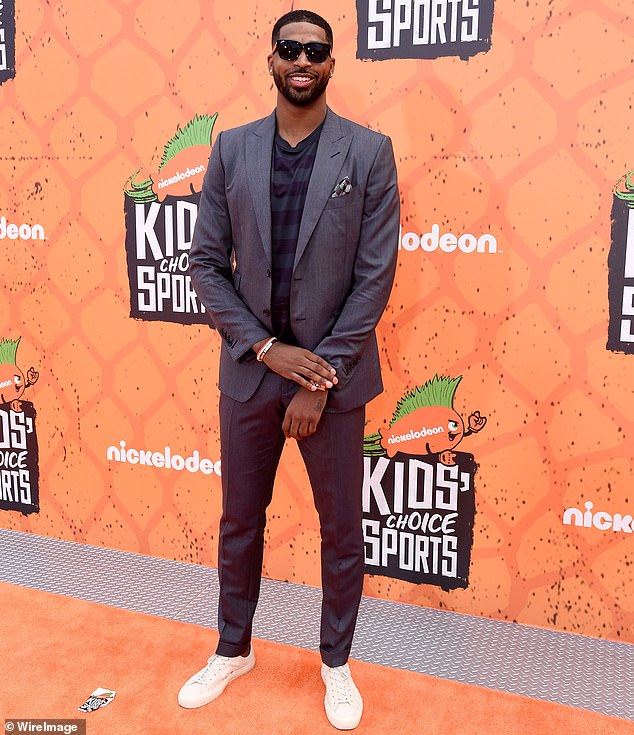 Family outing: Tristan and Jordan’s parents are both from Jamaica, so the trip not only gave Tristan a chance to reunite with his son but also to introduce him to his extended family; pictured in 2016

Tristan was also happy to show off his son.

The Cleveland Cavaliers star posted a photo of Prince grinning ear-to-ear from the deck of a yacht.

Tristan and Jordan’s parents are both from Jamaica, so the trip not only gave Tristan a chance to reunite with his son but also to introduce him to his extended family.

The move has been a huge reversal from Jordan and Tristan. She accused the NBA player of having begun to see Khloé Kardashian while they were still together in a court declaration from November 2018.

She also claimed that Prince had only seen his father a total of nine times since his birth amid their child support battle.

The couple eventually reached an agreement stipulating Tristan would pay Jordan $40,000 a month in child support, plus $200,000 due immediately to retroactively pay for missed support. 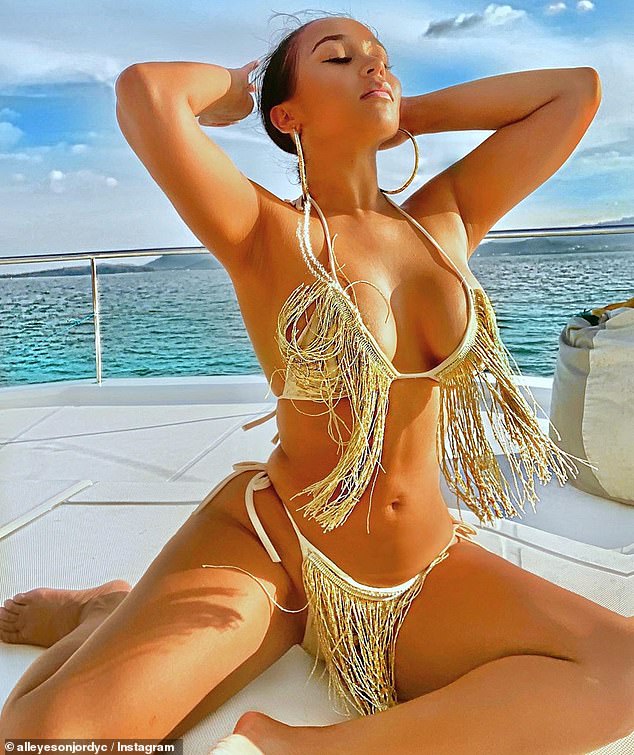 Vicious battle: Jordan was involved in a child support battle earlier in 2018 in which she claimed Tristan had slept with Khloé Kardashian while they were still together 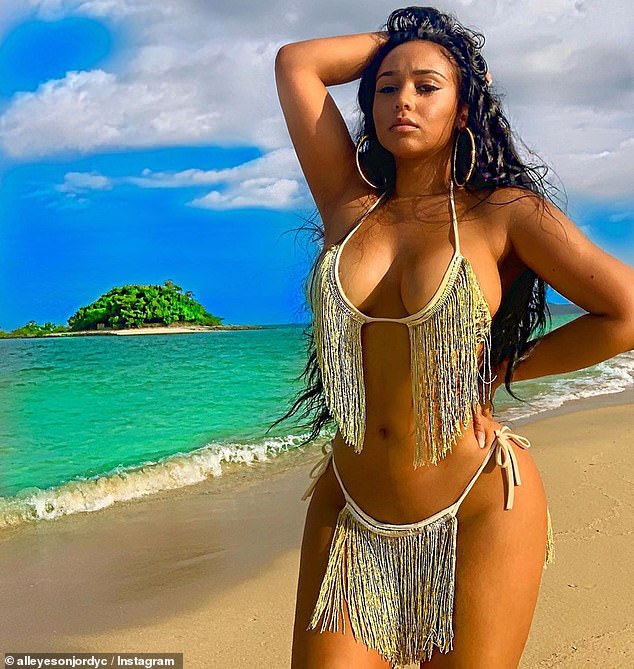 Astounding figure: While vacationing, Jordan has been serving up plenty of steamy bikini shots for her 706K followers 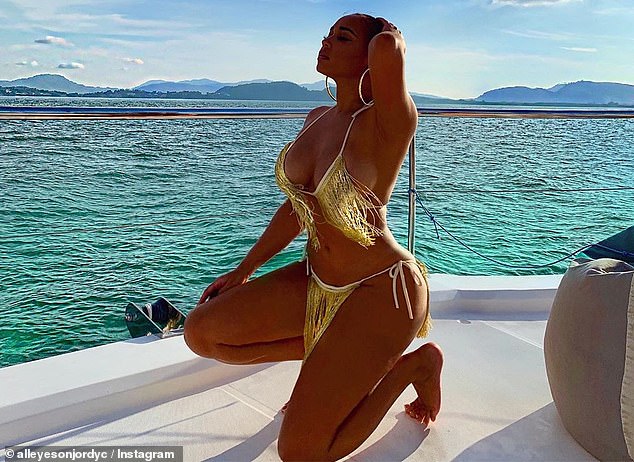 Curves ahead: Photos shared Monday and Tuesday to her Instagram showed her in a striking gold tasseled string bikini that barely contained her prominent bust and and flaunted her figure

While vacationing, Jordan has been serving up plenty of steamy bikini shots for her 706K followers.

Photos shared Monday and Tuesday to her Instagram showed her in a striking gold tasseled string bikini that barely contained her prominent bust and and flaunted her curvy figure.

She added a pair of large gold hoop earrings to complete the stunning look. 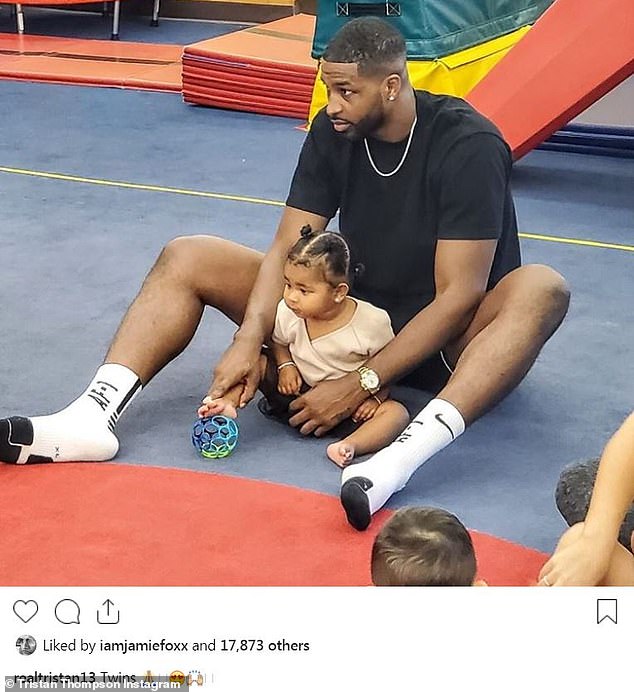 Father–daughter time: Earlier in July, Tristan shared a sweet photo of himself with his younger daughter True

Earlier in July, Tristan shared a sweet photo of himself with his younger daughter True.

The one-year-old girl was playing with a multicolored ball and seated between her 6ft10in dad’s incredibly long legs.

‘Twins,’ he joked in the caption.

Tristan’s relationship with Khloé was marred by news of his infidelities that appeared around the time she gave birth to True in April 2018.

In February of this year the couple called it quits after the sports star was revealed to have kissed Kylie Jenner’s best friend Jordyn Woods at a party.