Kendall Jenner and Travis Scott proved that there were no hard feelings with Kim Kardashian’s ex Kanye West, despite his bitter feud with the reality star, as he joined the rapper at Nobu in Malibu.

Having opted against taking sides in the rapper’s ongoing spat, Travis, 30, who previously alerted Kanye to the location of his daughter Chicago’s birthday party, headed to the eatery where the hitmaker, 44, was hosting a listening party for his new album Donda 2.

Kanye, who has now deleted any images of Kim and his children from Instagram after feuding with his ex, appeared to be on good terms with several members of the Kardashian-Jenner clan, as Kendall joined him at Nice Guy in West Hollywood, despite unfollowing him on Instagram a day earlier. 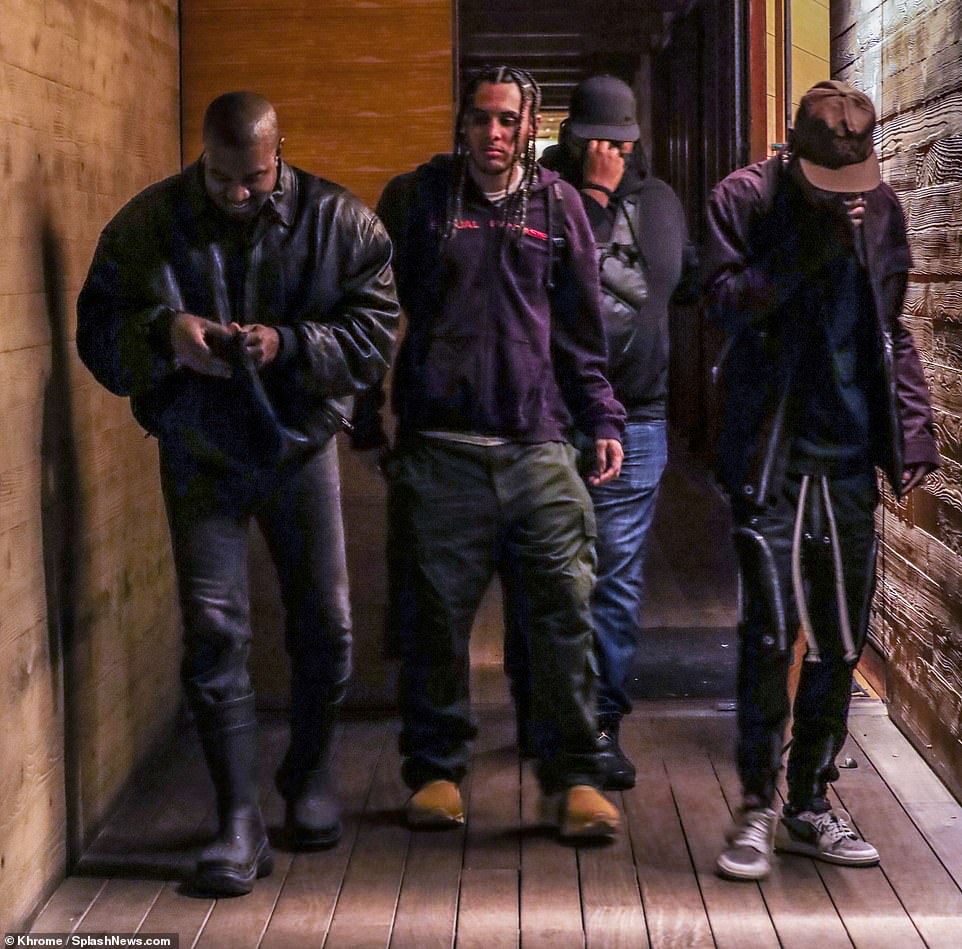 What feud? Kendall Jenner and Travis Scott (pictured far right) proved that there were no hard feelings with Kim Kardashian’s ex Kanye West (far left), despite their bitter feud, as he joined the rapper at his Donda 2 listening party at Nobu

After celebrating the completion of Kanye’s album, Travis was spotted leaving the eatery with Kanye, despite the rapper’s supposed estrangement from the Kardashian clan in the wake of his split from wife Kim last year.

Meanwhile Kendall, who was seen joining Travis at Nice Guy later in the evening, opted for a grey graphic crop top and bold brown suede and leather flares, teamed with pointed-toe heels.

Travis and Kanye collaborated on one of the tracks from his much-anticipated album Donda 2, which is set for release on February 22.

His sighting is also the first since mid-January when he was spotted at LAX’s private terminal after returning home from a trip to Cabo San Lucas. 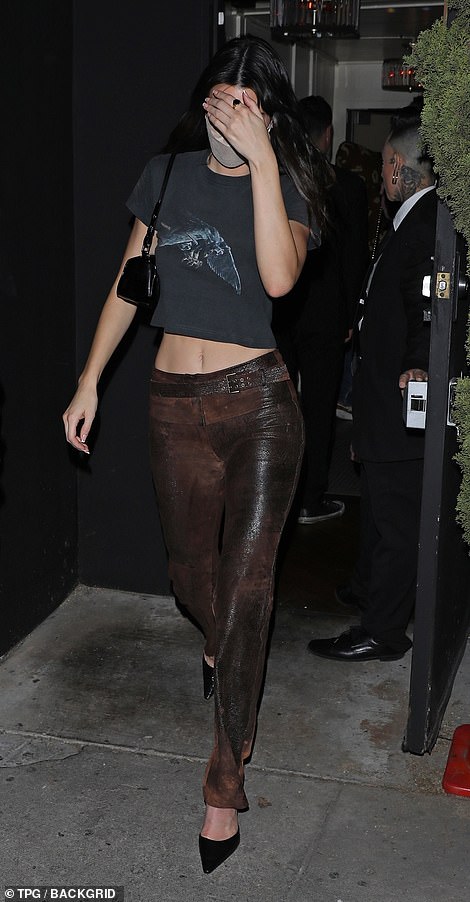 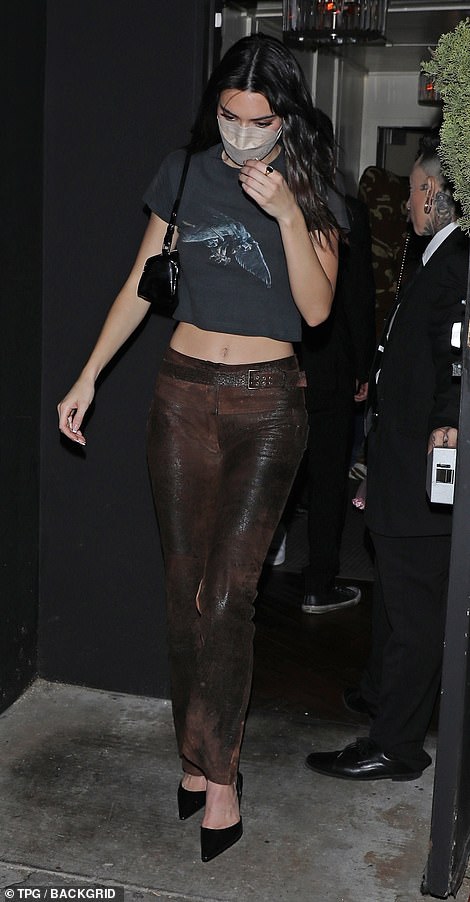 Standing out: Model Kendall was seen joining Travis and Kanye at Nice Guy in West Hollywood, flashing her abs in a grey crop top and bold brown leather trousers 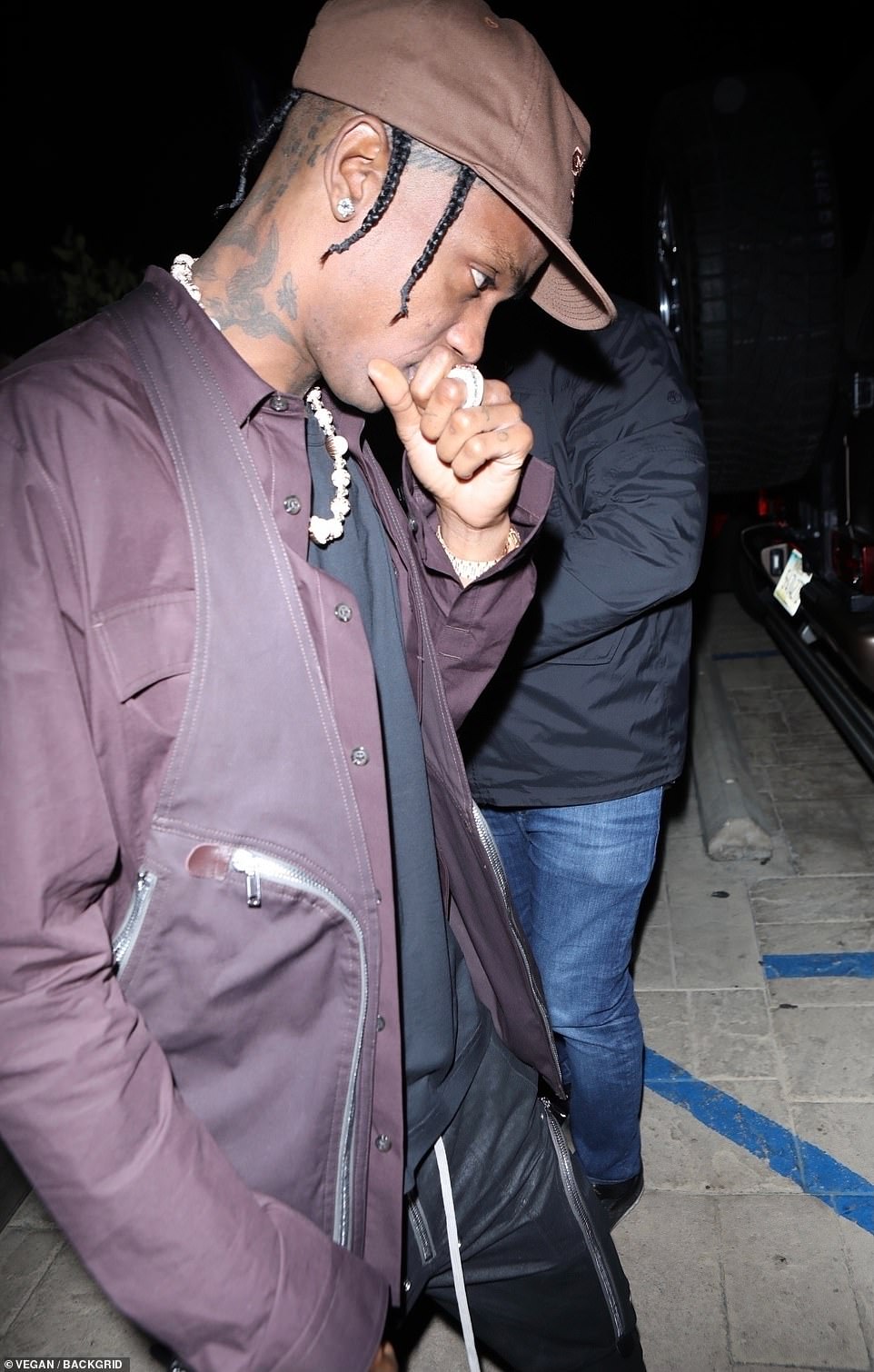 Dad: Travis Scott, who Kanye previously praised for sharing the location of his daughter Chicago’s birthday party after claiming it was kept from him, was at the dinner with hitmaker, who he has remained close to amid the family drama 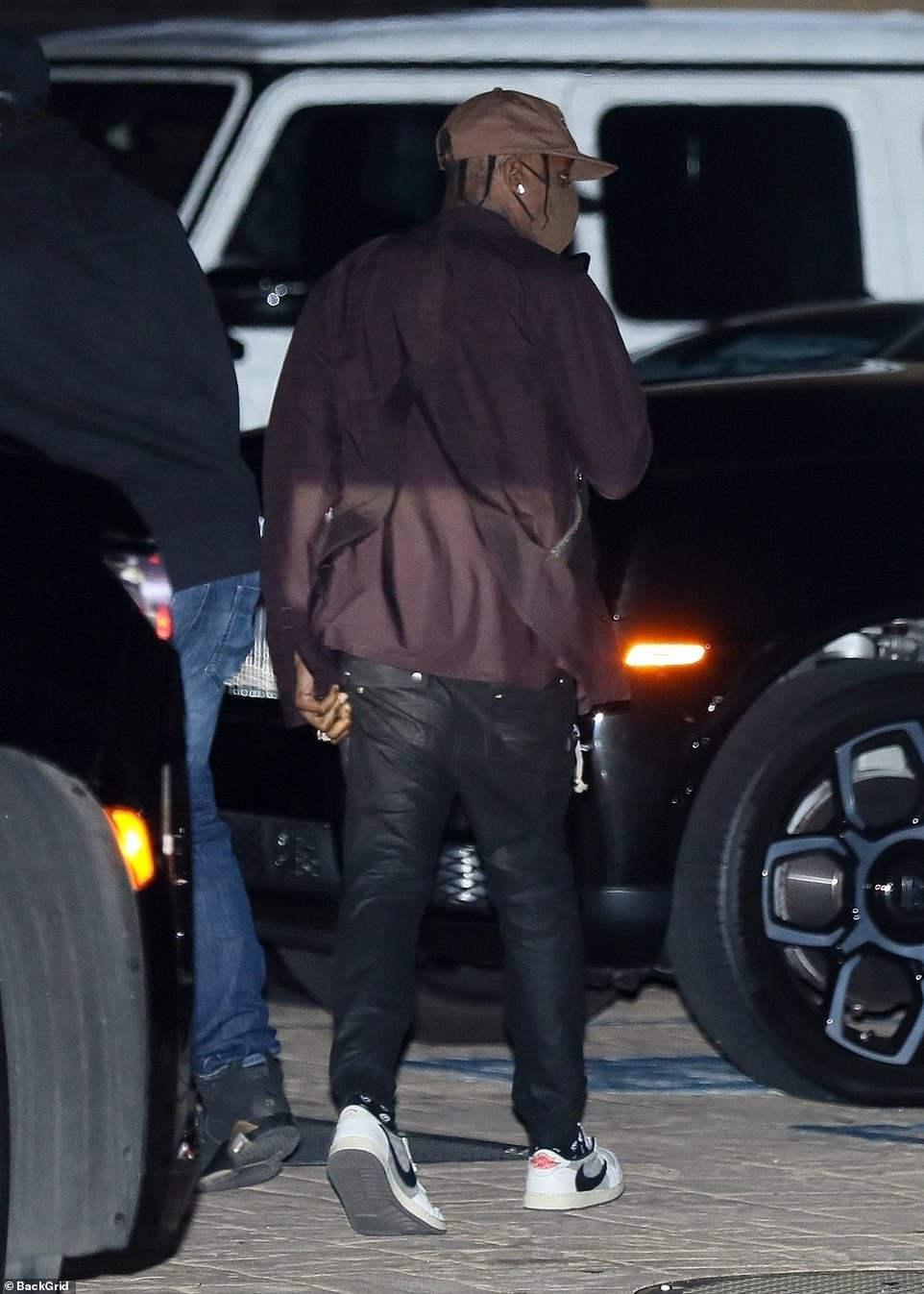 Rare outing: Travis’s sighting was the first since Kylie announced on Monday she’d given birth to their second child, a son 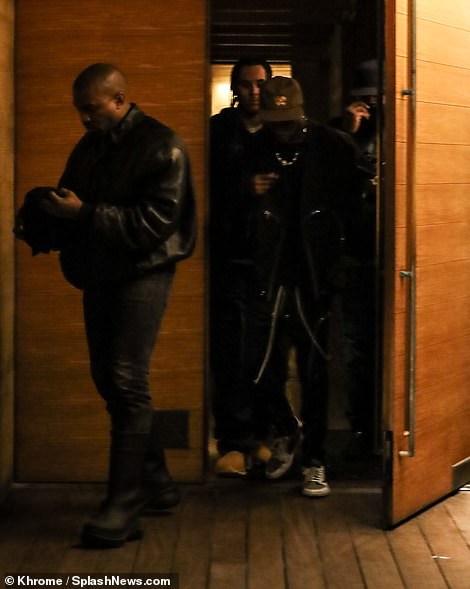 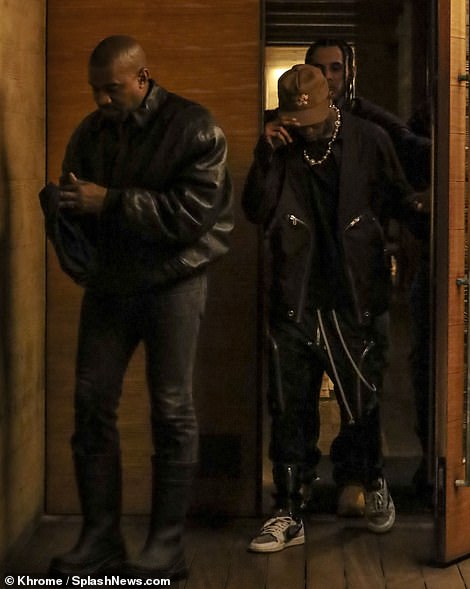 Friendly: Kanye, who previously thanked Travis for sharing the location of his daughter Chicago’s birthday party so he could attend, was seen leaving Nobu after the listening party with the rapper 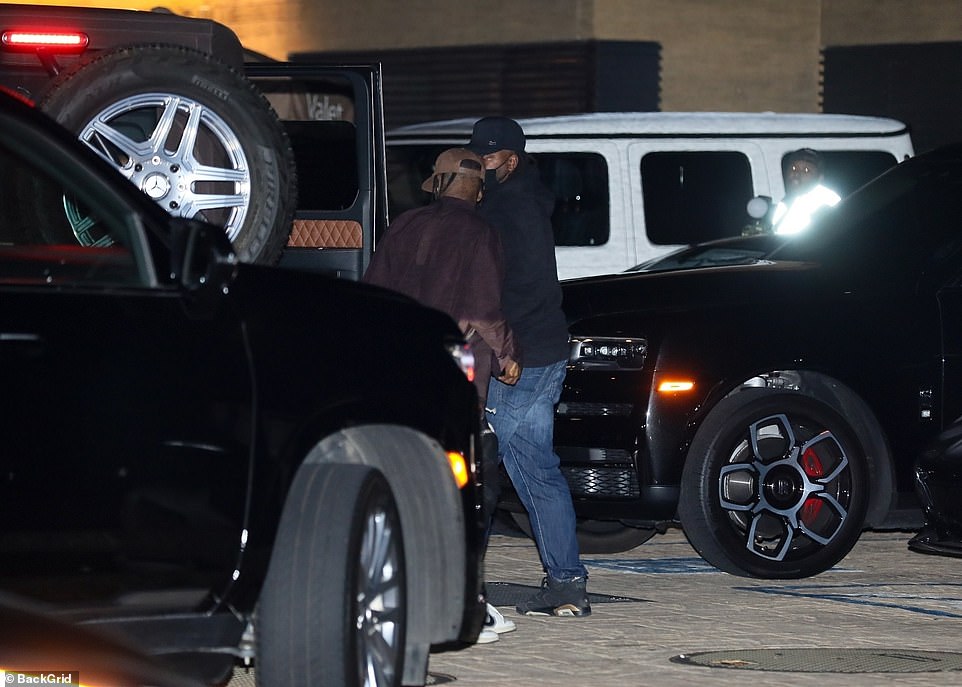 On Monday, a day after videos were shared online of Kanye spending time with his children, all traces of his family – which also includes sons Saint, six, and two-year-old Psalm – were removed from his Instagram account, leaving only posts about his career and other ventures.

Kanye previously claimed that Travis was responsible for sharing the address to his daughter Chicago’s birthday party, adding that Kylie let him in after he was spotted by security.

In a video acquired by TMZ, he said: ‘I just gotta shout out to Travis Scott for sending me the address and the time and making sure that I was able to spend that birthday memory with my daughter and to be there with the rest of the family.

‘I saw everybody, it was you know, Kris, Corey and Kylie… Kylie let me in right when I got to the spot because the security stopped me once again when I got there,’ he said.

‘And you know, it’s just a matter of having a conversation, open dialogue, and everyone just had a great time.

‘I’m just really happy that I could be there for my children and I just want to thank everyone for their support in the situation. Letting me just calmly and legally take control of my narrative.’ 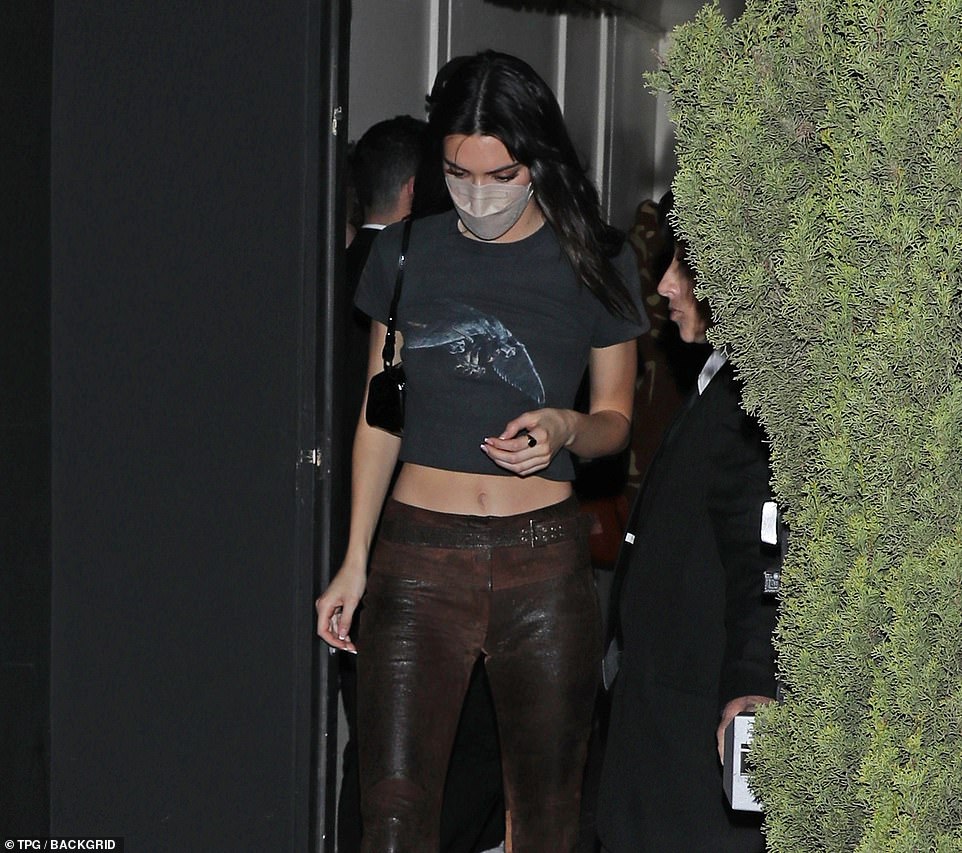 Arriving: Despite Kanye’s supposed estrangement from the Kardashian clan, Kendall was seen partying at The Nice Guy after the rapper was seen heading into the swanky venue with Travis

Revealing: Kendall highlighted her famous model physique in the revealing black crop top teamed with tie-dye brown trousers and kitten heels as she headed to the party 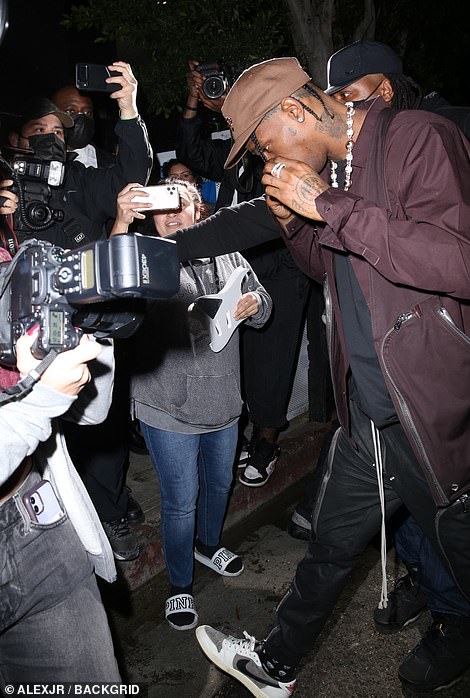 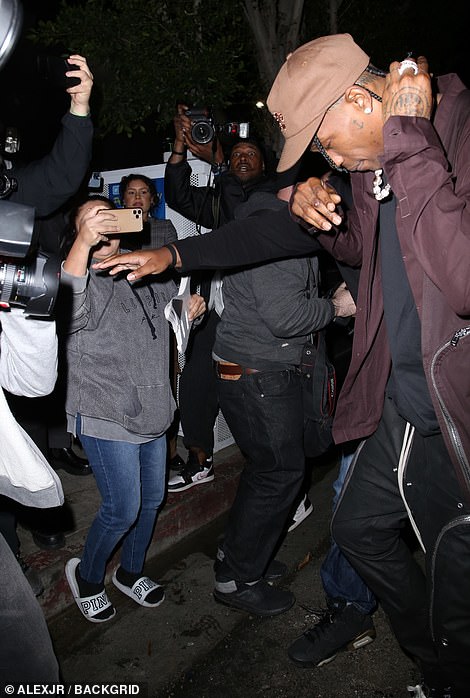 There he is! Travis was quickly mobbed by fans as he headed outside with Kanye, after the rapper deleted all images about Kim and their children from his Instagram account after days of feuding with his ex 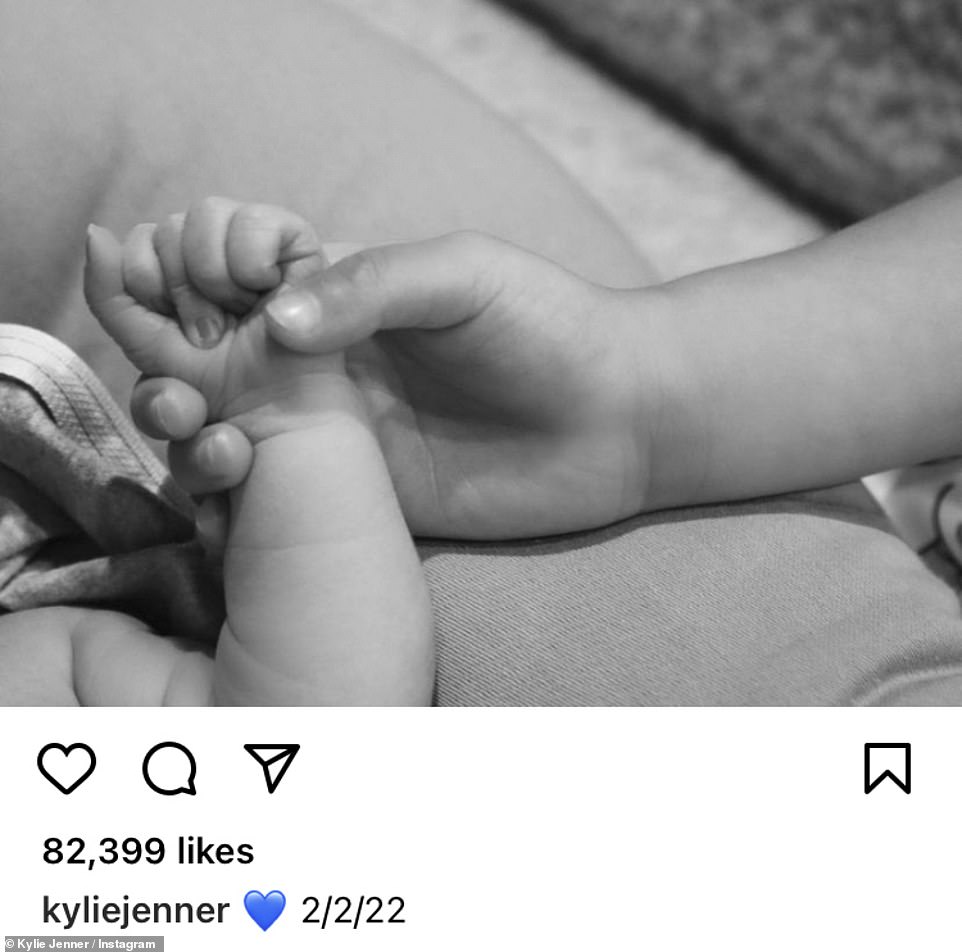 Birth reveal: On Monday Kylie revealed she’d given birth to her second child with a simple snap on Instagram of the reality star and makeup mogul holding the newborn’s hand, while revealing the date of birth as 2/2/22

Response: Scott reacted to the news with a blue heart emoji and six brown heart emojis in the comments of Kylie’s post 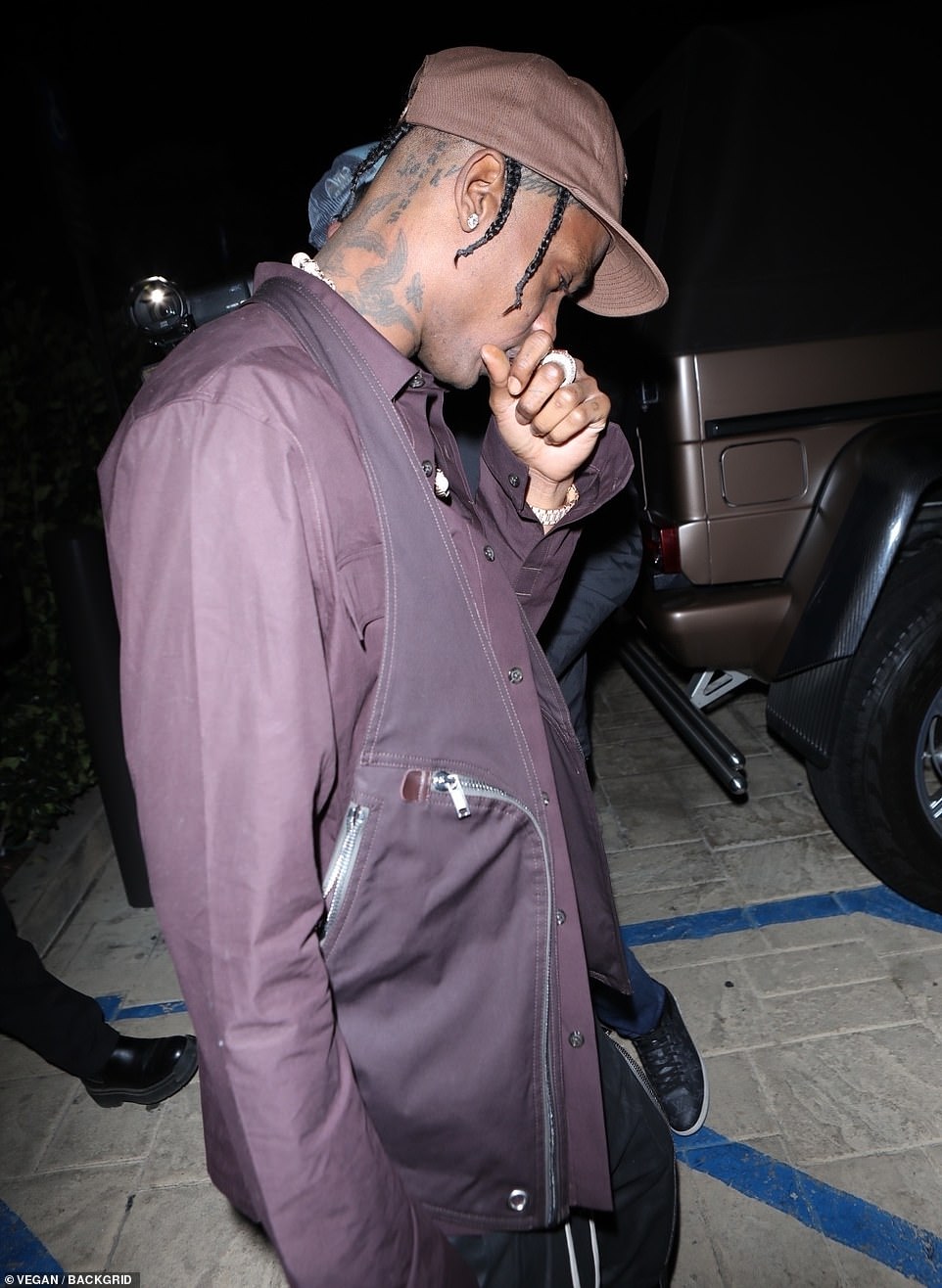 No involvement! Travis has opted against taking sides in Kanye’s ongoing feud with his ex-wife Kim, who he has accused of kidnapping their daughter Chicago, and even claiming she accused him of putting a hit on her

Though there reportedly was no ‘scene’ between the divorcing couple, a source told The Sun on Sunday that they kept their distance throughout the party.

Kanye previously alleged on social media that he was not ‘allowed to know’ where the party was taking place, though it was later claimed that there were supposed to be two parties for Chicago.

The outing with his ex wife’s family members comes as Kanye removed all his posts about Kim and their children from his Instagram account after days of feuding with his ex.

The ‘Flashing Lights’ hitmaker has been locked in a public row with his estranged wife for the last few weeks, criticising the Skims founder for letting their daughter North, eight, use TikTok without his permission, alleging she had kidnapped their daughter Chicago, four, and even claiming she accused him of putting a hit on her, while she hit back in a lengthy statement insisting she is the ‘main provider and caregiver’ for their children. 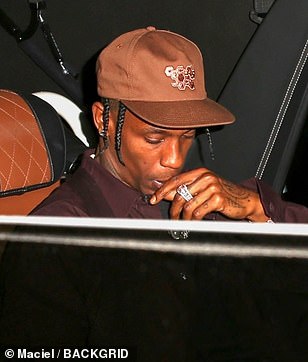 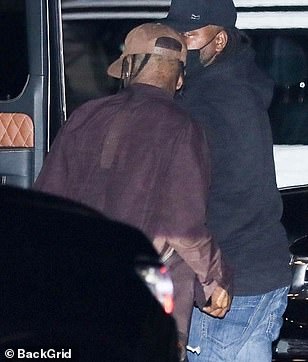 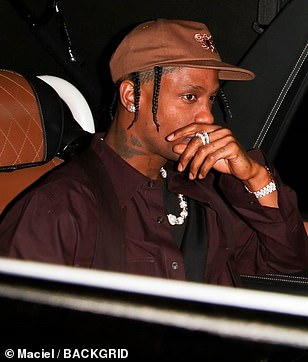 More to come? Following the night out, Travis cut a solo figure as he jumped into a car to head to the next venue, presumably celebrating the birth of his son 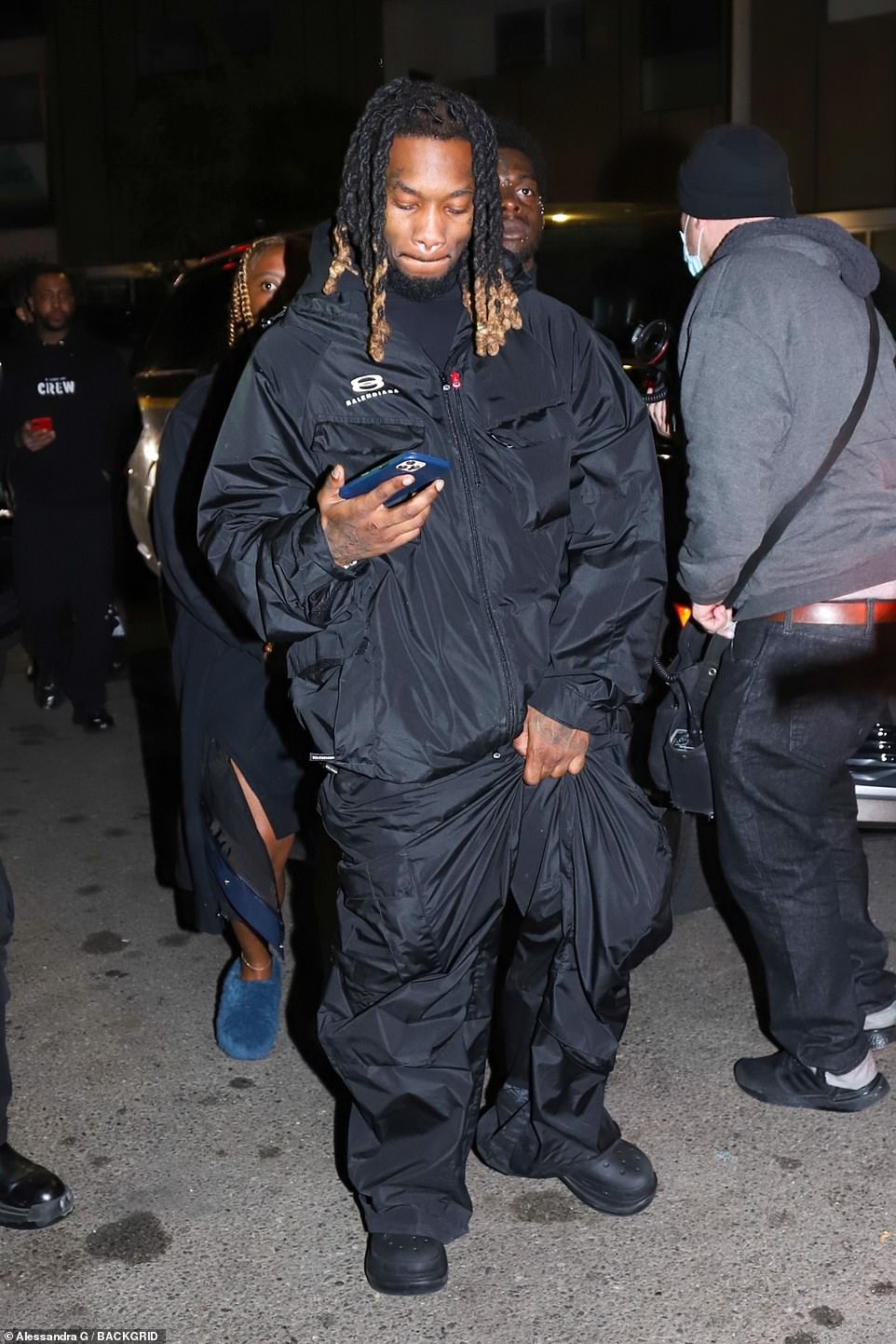 Very low-key! Also in attendance for the night out was Offset, who cut a solo figure as he arrived for the evening 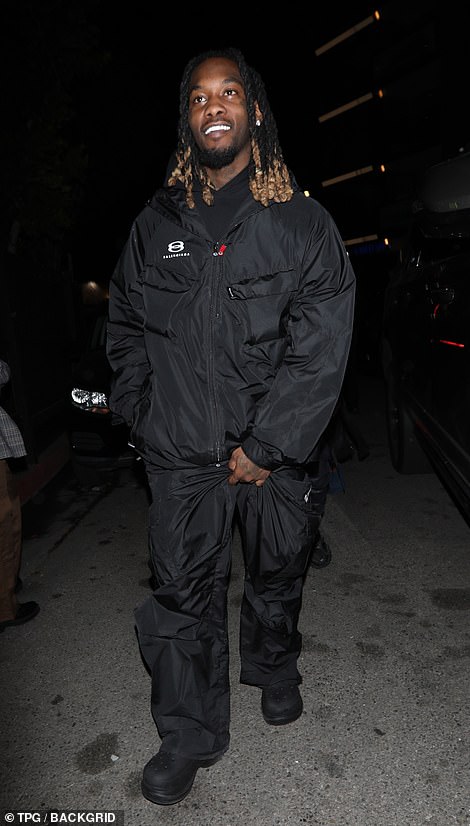 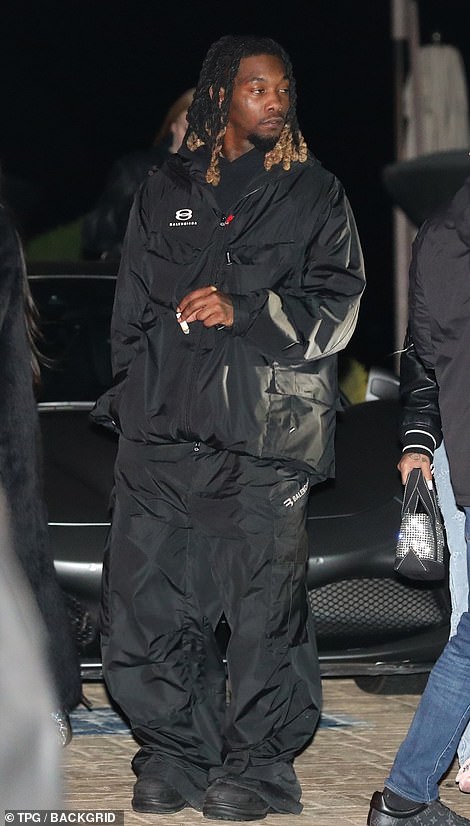 Happy: He seemed in good spirits as he exited Nobu after the star-studded listening party for Kanye’s album Donda 2, which is set for release on February 22

But on Monday, a day after videos were shared online of Kanye spending time with his children, all traces of the rapper’s family – which also includes sons Saint, six, and two-year-old Psalm – were removed from his Instagram account, leaving only posts about his career and other ventures.

Kim previously sparked Kanye’s ire when she claimed she’s the ‘main provider and caregiver’ for their children, with the brunette beauty – who filed for a divorce in early 2021 and is now dating comedian Pete Davidson – saying on Instagram:

‘As the parent who is the main provider and caregiver for our children, I am doing my best to protect our daughter while also allowing her to express her creativity in the medium that she wishes with adult supervision – because it brings her happiness.

‘Divorce is difficult enough on our children and Kanye’s obsession with trying to control and manipulate our situation so negatively and publicly is only causing further pain for all.

‘From the beginning I have wanted nothing but a healthy and supportive co-parenting relationship because it is what is best for our children and it saddens me that Kanye continues to make it impossible every step of the way.’ 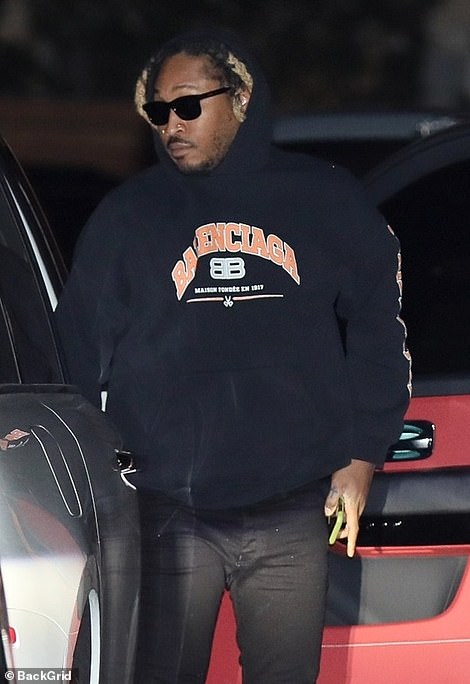 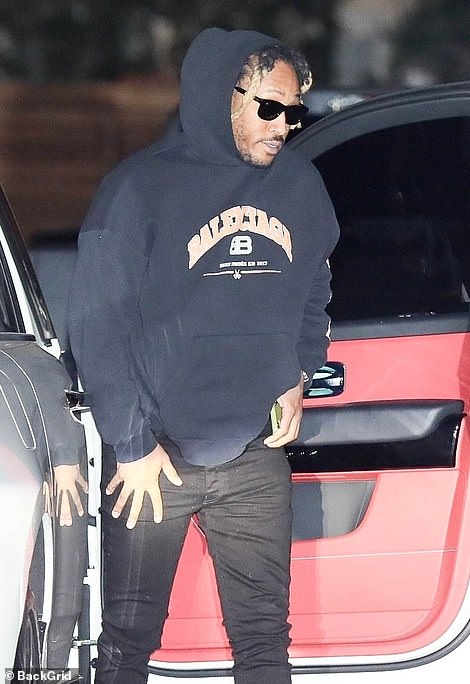 Future’s look: Scott was joined by rapper Future (real name Nayvadius DeMun Wilburn) at Nobu, who stepped out with a black Balenciaga hoodie

Her estranged husband commented: ‘What do you mean by main provider ? America saw you try to kid nap my daughter on her birthday by not providing the address. (sic)’

The couple called it quits last February although West refused to let go of the relationship, claiming God would bring them back together after his curvaceous reality star ex moved on last November with comedian Pete Davidson. 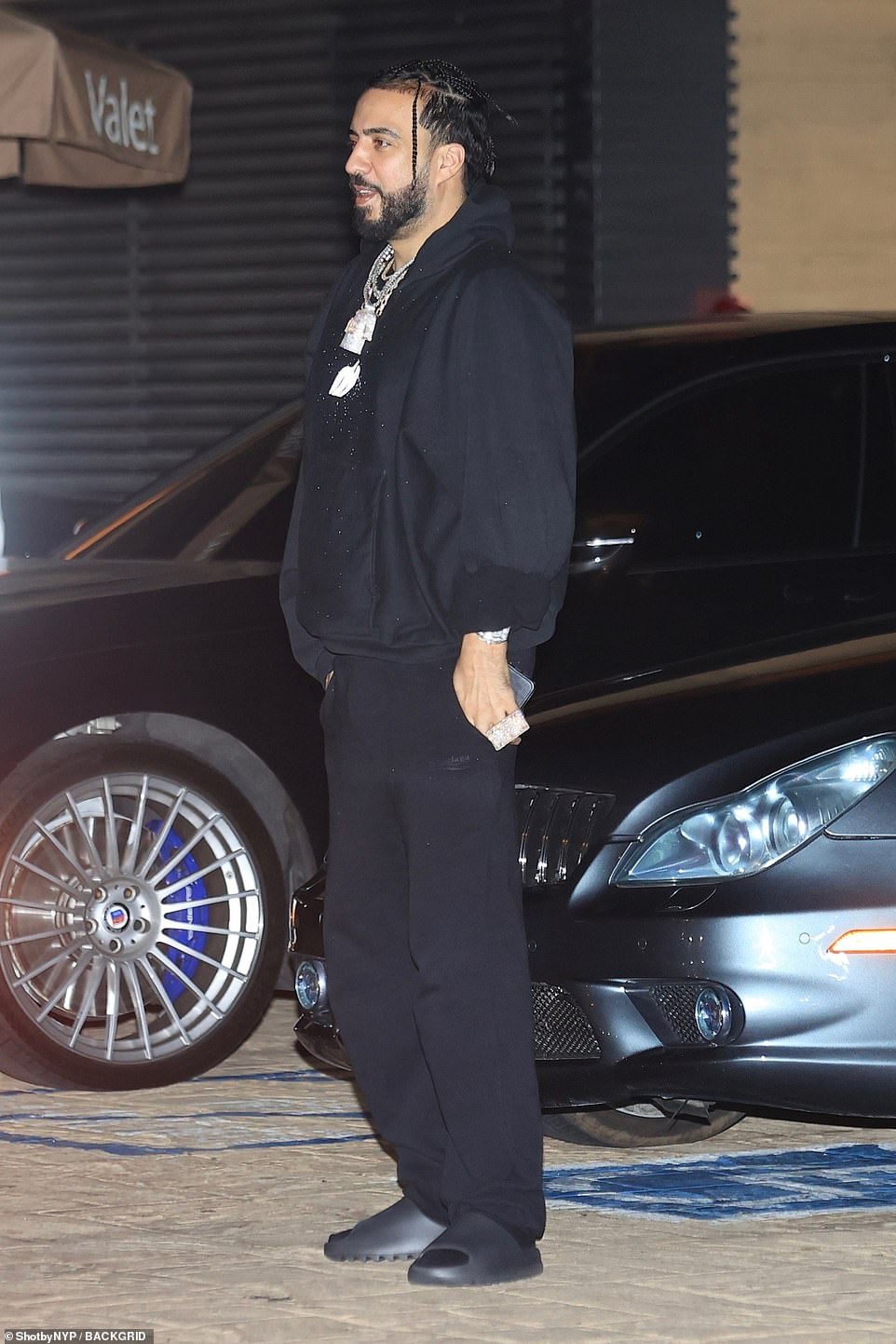 For the night out, Travis sported a light brown baseball cap with a light brown face mask covering his mouth and nose, teamed with a dark brown jacket and diamond earrings glimmering in the night.

The rapper completed his look with white Nike low-top sneakers as he left the popular Malibu restaurant.

Travis was also joined by rapper Future (real name Nayvadius DeMun Wilburn), 38, at Nobu, who stepped out with a black Balenciaga hoodie.

The outing came just a day after Kylie Jenner first revealed the birth of their second child together, a son born on February 2.

Jenner revealed the news with a simple snap on Instagram of the reality star and makeup mogul holding the newborn’s hand, while revealing the date of birth as 2/2/22. 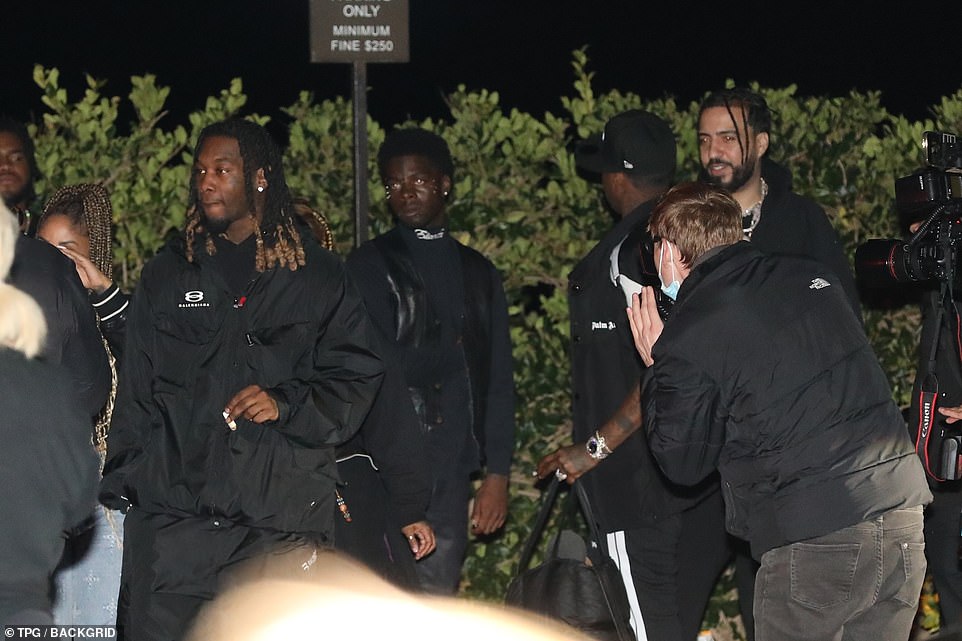 Grand occasion: The stars were out in force as they grabbed dinner before continuing their night of partying

Scott reacted to the news with a blue heart emoji and six brown heart emojis in the comments of Kylie’s post.

Travis and Jenner also share daughter Stormi, who celebrated her fourth birthday on February 1, just one day before their second child was born. The couple have not revealed the name of their son at this time.

It was reported on Monday that despite becoming parents for the second time, Kyle and Travis have opted against moving in together, with a source telling PEOPLE: ‘Kylie and Travis are happy together. He is working on new music, but is also around a lot. They still don’t officially live together, but doing what works best for them.’ 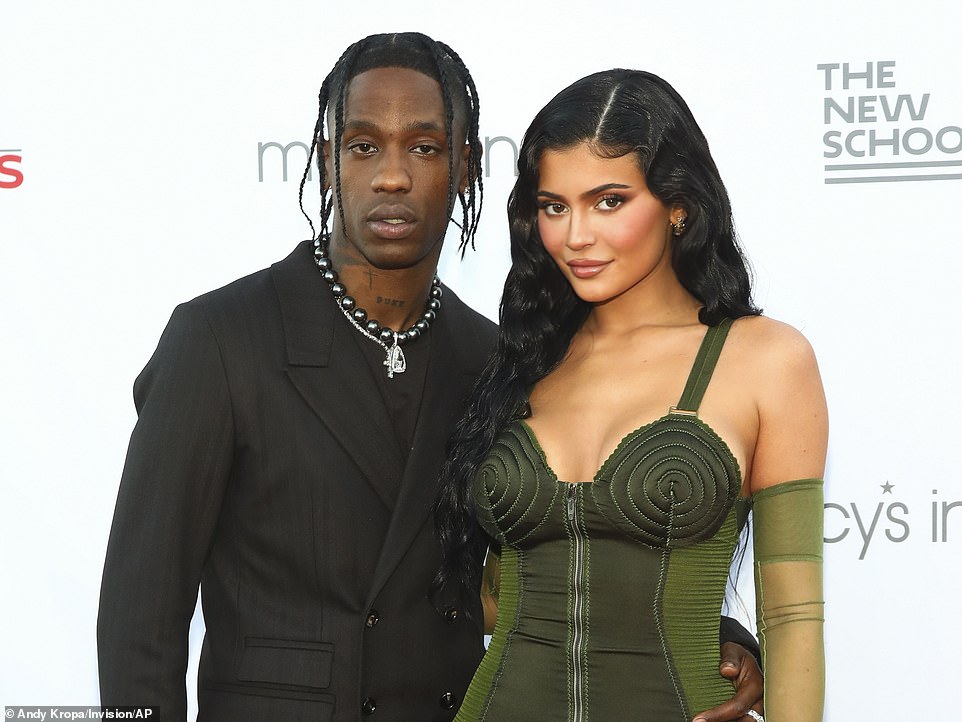 Parents: Scott and Jenner (pictured in June 2021) also share daughter Stormi, who celebrated her fourth birthday on February 1, just one day before their second child was born 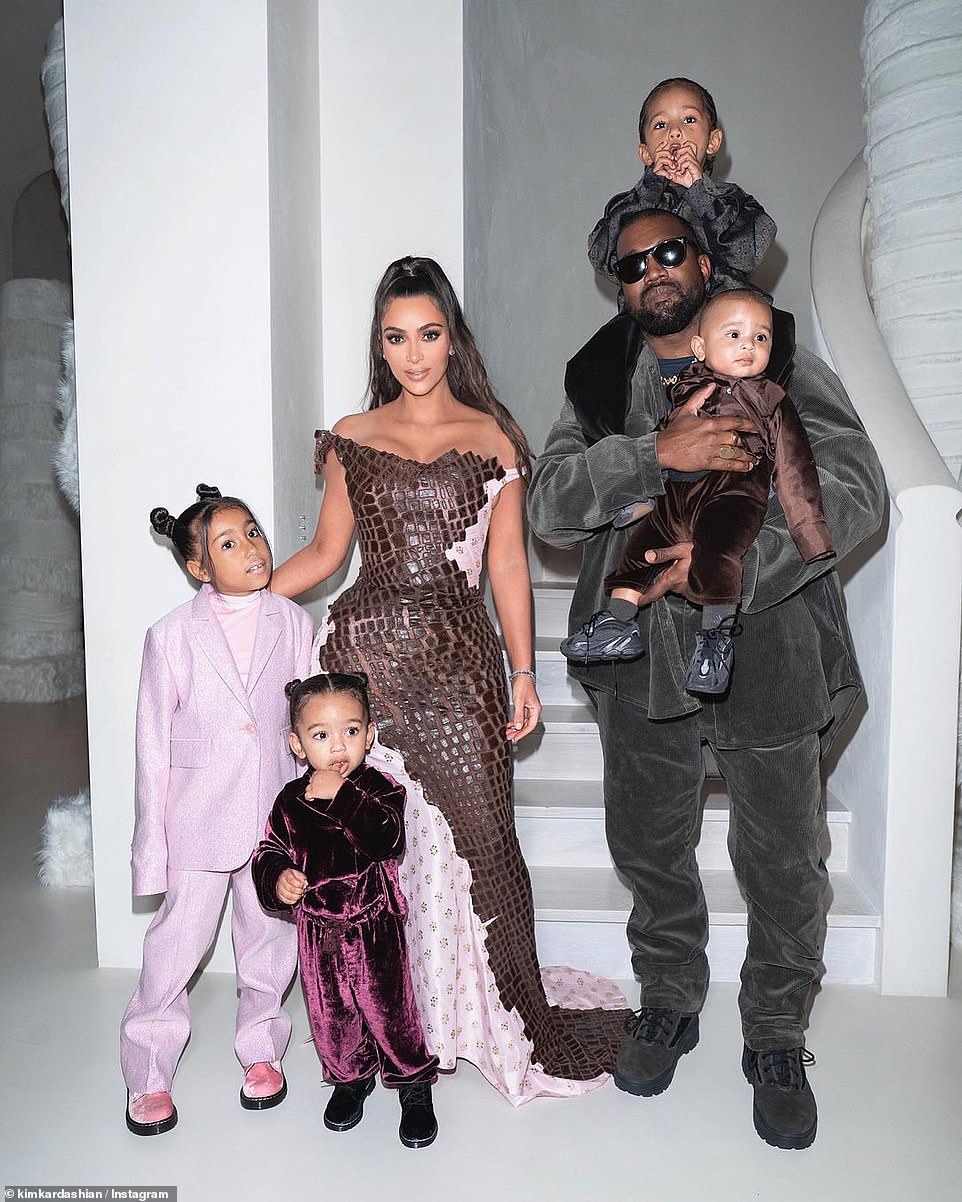 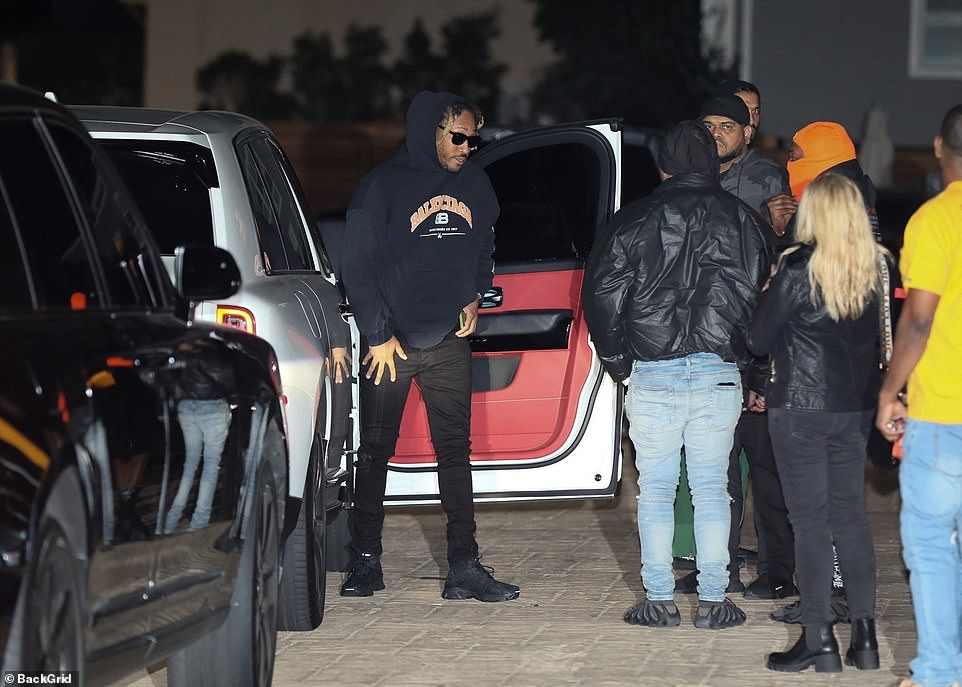 Album: Scott has been teasing his fourth studio album Utopia for quite some time, though there is no release date at this time