He recently donned a dress and a wig to make a cameo in The Play What I Wrote.

But on Wednesday, Tom Hiddleston, 40, put on a much more dapper display as he walked the red carpet with his girlfriend Zawe Ashton, 37.

The Loki actor cut a suave figure as he posed for photos beside Fresh Meat star Zawe as they attended UNICEF’s Blue Moon Gala in London on Wednesday. 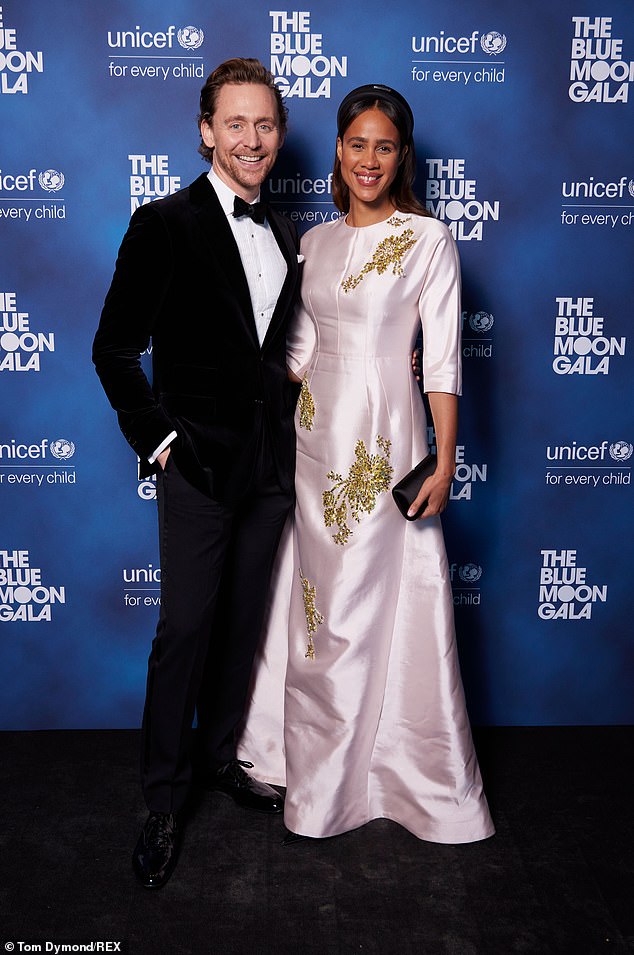 Happy: Tom Hiddleston, 40, put on a dapper display in velvet whilst his girlfriend Zawe Ashton, 37, stunned in a vintage pink and gold gown at the UNICEF gala on Wednesday

Tom wore a black velvet blazer along with matching trousers with a crisp white shirt with a smart bow tie.

Zawe looked stunning as she slipped into a light pink A-line dress that was embellished with a gold floral print.

She wore her raven tresses down with an oversized Prada black silk headband and centre parting. 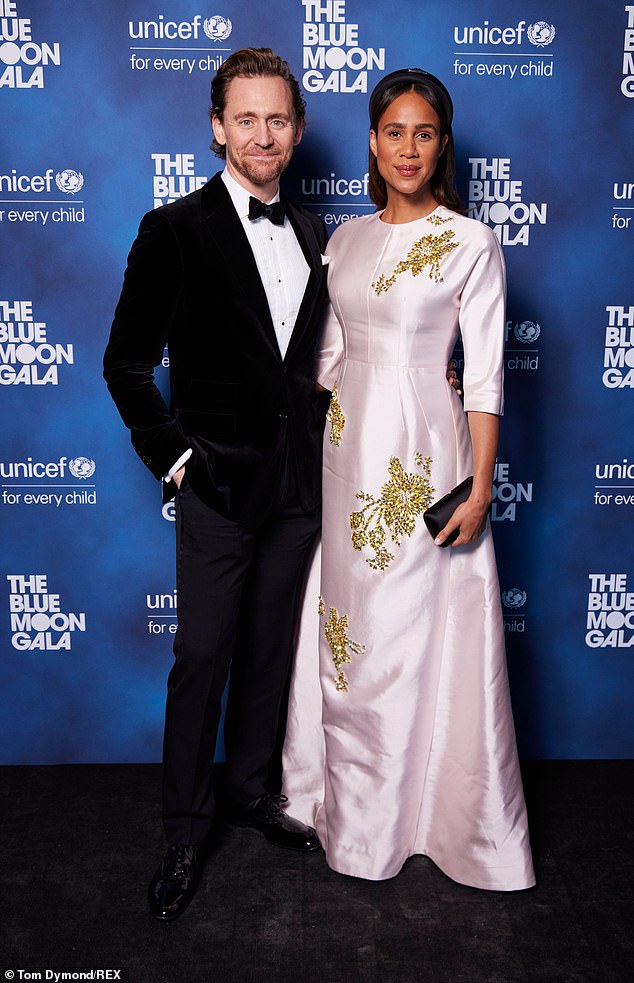 Beaming: Zawe looked stunning as she slipped into a light pink A-line dress that was embellished with a gold floral print

The actress carried a small box clutch bag for all her essentials and stuck to a simple palette of make-up that drew focus to her incredible complexion.

The Blue Moon Gala is a special event that marks a significant moment in UNICEF’s history – marking 75 years as the leading organisation working for children.

The money raised from tonight’s event at Outernet London (a major new immersive media, music and culture district in the heart of London’s West End), will go towards helping UNICEF continue its work for children around the world for the next 75 years. 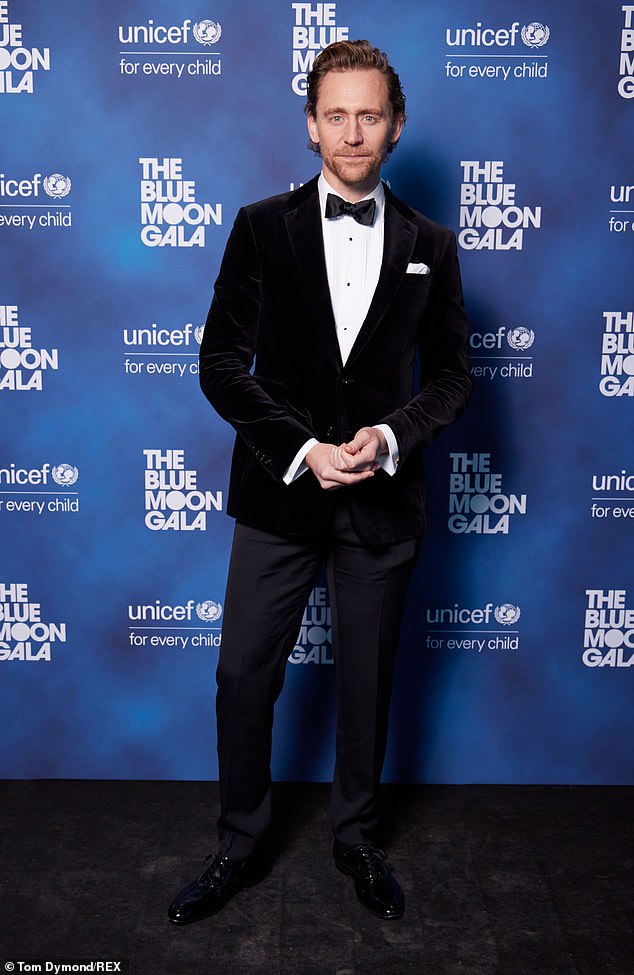 Dapper! Tom wore a black velvet blazer along with matching trousers with a crisp white shirt with a smart bow tie

Elsewhere this week, Tom sported a very different look as he joined a host of superstars to make a cameo in The Play What I Wrote on Monday night.

The actor, took to the stage at the Birmingham Repertory Theatre to don a dress and wig on-stage during a fun-filled stint, following on from a number of stars who have done the same over the age.

He appeared on stage as a mystery guest in the homage to Morecambe and Wise, which was originally directed by Kenneth Branagh, where he was seen in a number of increasingly bizarre costumes amid his animated turn with fellow co-stars and ahead of appearances from different guest stars every night. 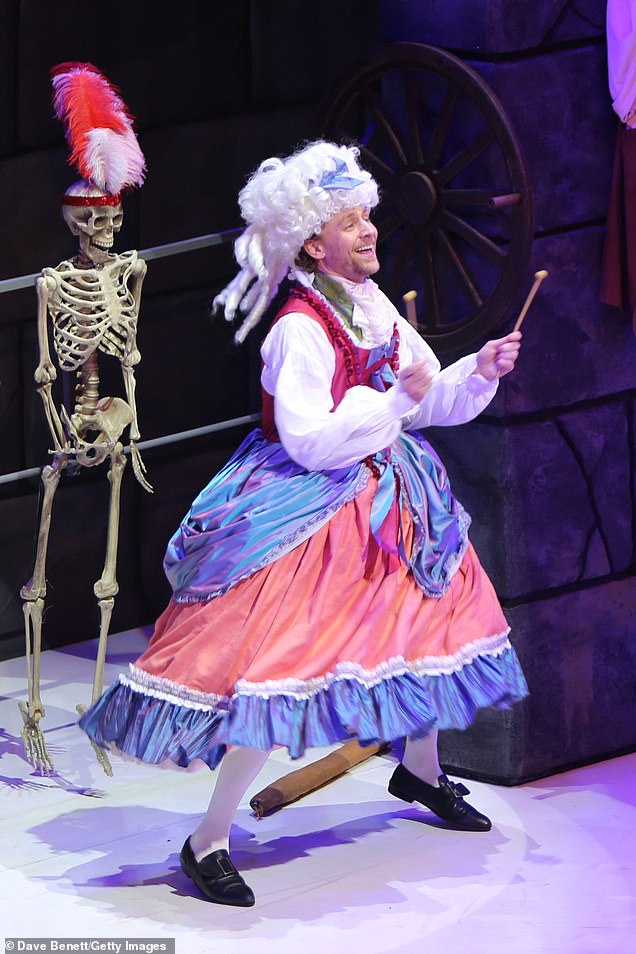 New look: Tom donned a wig and a dress to cameo in The Play What I Wrote at the Birmingham Repertory Theatre on Monday evening

In one scene Tom wore a green waistcoat with a lace cravat along with knee high socks and buckled shoes before slipping into a slew of other showstopping looks to illicit laughs from the crowd.

He then donned an embroidered blue silk dressing gown with red detailing over the top, in a similar look to that channelled by different stars throughout the years during their respective appearances.

Finally, the star put on a pink and blue dress adorned with bows and boasting a hoop skirt, along with a baroque style wig as he danced across the stage. 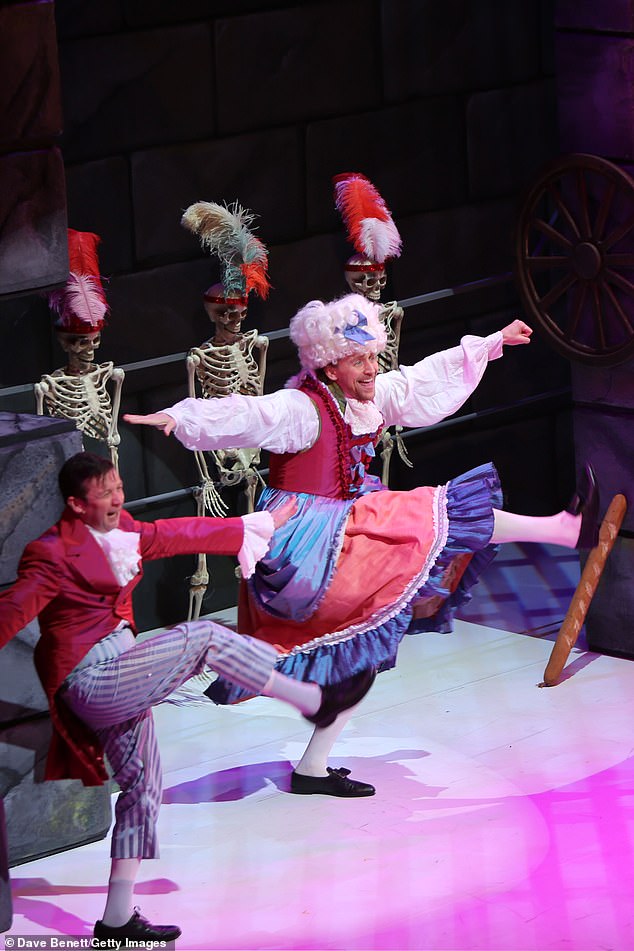 Cameo: The actor appeared on stage as a mystery guest in the production, that saw him wear a slew of increasingly bizarre costumes