Mission Incredible! Tom Cruise, 58, leaps from a speeding motorbike as it hurtles off a ramp 500ft into the air during action sequence for seventh MI film – but says: I’ll stop the stunts at 60

Leaping from a speeding motorbike as it hurtles off a ramp 500ft in the air, Tom Cruise proves yet again that nothing is a Mission: Impossible – even at the age of 58.

These dramatic scenes for the seventh instalment of the successful movie franchise were shot last week on a former air base in Oxfordshire where locals have grown accustomed to the actor’s high-octane stunts.

Cruise arrived on set in a black face mask, but it wasn’t long before he cast such caution aside to roar along a 650ft ramp. 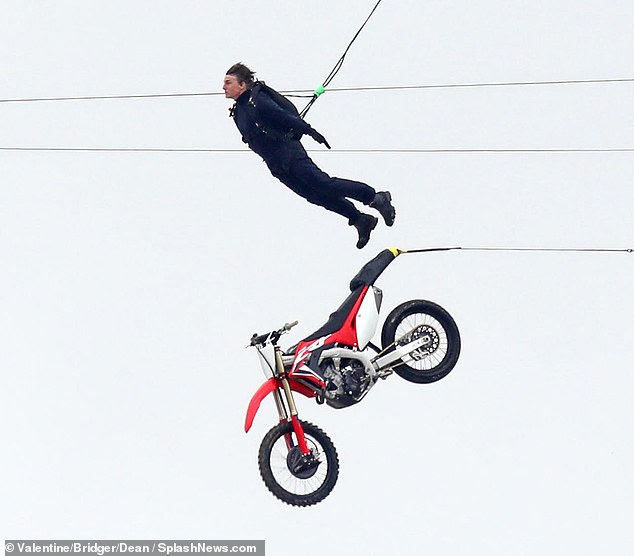 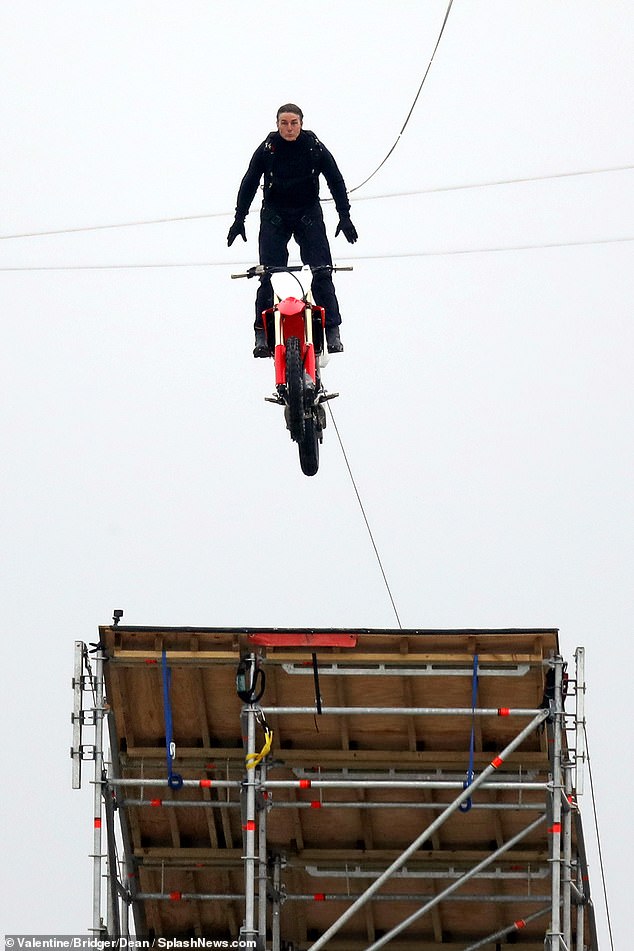 He then hurled himself from the bike, but was prevented from plummeting to earth by the safety wires attached to his back.

It was part of a stunt sequence estimated to have cost £2 million – one of the most expensive ever made in Britain.

As if to underline the dangers, the set went up in flames earlier this month during trials by a stuntman, although fortunately no one was hurt.

In recent weeks, villagers have found their rural solitude replaced by the sound of powerful cars, motorbikes and helicopters, including one carrying Cruise – before he leapt from it at 10,000ft. 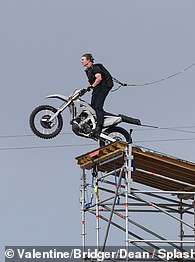 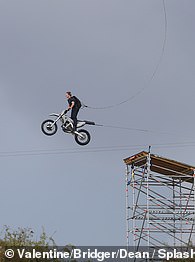 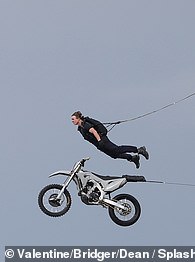 The action sequence shows the speeding motorbike hurtling off the ramp as safety cables stop Tom from plummeting with his bike. The actor is notorious for filming his own stunts, and once again provided his fearless nature

Martin Woods, who lives nearby, said: ‘Nothing much ever used to happen here – and now Hollywood has arrived.’

However, like the self-destructing messages that give Cruise’s character Ethan Hunt his missions, The Mail on Sunday can reveal that the actor has put a time limit on his stunts and will stop doing them when he turns 60.

Sources say he is keen to complete filming for the as-yet-unnamed eighth and final instalment before he reaches the milestone in July 2022.

‘There is no way that Tom won’t do his trademark stunts for the last film, but he doesn’t want to do it past 60 so is keen to get it all wrapped up by the time he reaches his big birthday,’ said an insider.

The actor, estimated to be worth about £430 million, has been resting his aching body in a £30,000-a-week apartment close to Harrods in Knightsbridge and plans to stay in the UK until the final Mission: Impossible movie is finished. 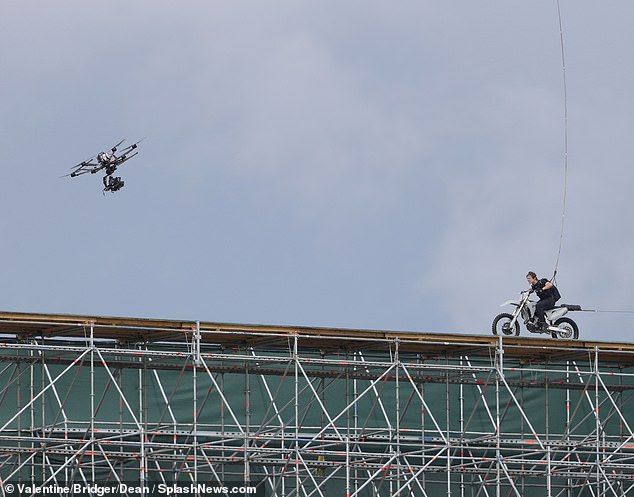 Cruise is pictured driving off the edge of the 650ft ramp, as a drone films it in a stunt sequence estimated to have cost £2 million – one of the most expensive ever made in Britain

To keep fit, he completes daily 5km runs in London’s parks, and to unwind he has been enjoying visits to Soho Farmhouse, an exclusive members’ club in Oxfordshire, with co-star Simon Pegg, who plays Benji Dunn.

Cruise also recently surprised members of Richmond Golf Club by arriving for lunch with friends in a £2.5 million matt black helicopter which ferries him around from a helipad in Battersea, South-West London.

A source said: ‘He uses that helicopter like a train. He is really enjoying the British countryside, as well as the London parks.

‘It is hard to see him leaving the UK at the end of all this filming. He has really begun to find himself at home here.’

The Mission: Impossible films, based around the successful TV series which ran between 1966 and 1973, began in 1996 and have so far grossed an estimated £2.7 billion worldwide.

Other stunts performed by father- of-three Cruise include swinging from Dubai’s Burj Khalifa building at 2,700ft, clinging to the outside of a plane as it took off, and holding his breath underwater for six minutes.