Tom Brady plans to huddle with family before deciding on NFL retirement: Buccaneers QB, 44, says it ‘pains’ wife Gisele, 41, to see him ‘get hit’ and his three children ‘deserve’ to have him around as a father

With his football future unsettled, Tom Brady plans to huddle with his family before deciding if he’ll return to the Tampa Bay Buccaneers for a 23rd NFL season in 2022.

‘It’s not always what I want,’ Brady told SiriusXM’s Jim Gray on Monday. ‘It’s what we want as a family.’

The 44-year-old’s season ended Sunday when he and the defending-champion Bucs were eliminated from the playoffs by the Los Angeles Rams with a last-second field goal at Tampa’s Raymond James Stadium. But the 30-27 Divisional Round defeat aside, Brady was still his prolific self in 2021, leading the NFL in completions (485), touchdown passes (43) and passing yards (5,316).

Discussing his wife, 41-year-old supermodel Gisele Bundchen, their children Ben, 12, and Vivian, 9, as well as his eldest son from a previous relationship, 14-year-old Jack, Brady stressed that he owes his family for the support they’ve given him.

‘She deserves what she needs from me as a husband and my kids deserve what they need from me as a dad,’ Brady said.

Bundchen has expressed concerns for his safety over the years, and once enlisted Brady’s old college teammate, Jay Feely, to convince her husband to retire, the former NFL kicker told Sports Illustrated in 2018.

‘My wife is my biggest supporter,’ Brady continued. ‘It pains her to see me get hit out there.’

Brady previously said he wants to play until at least 45. He has one year and $25.4 million remaining on his contact with the Bucs. 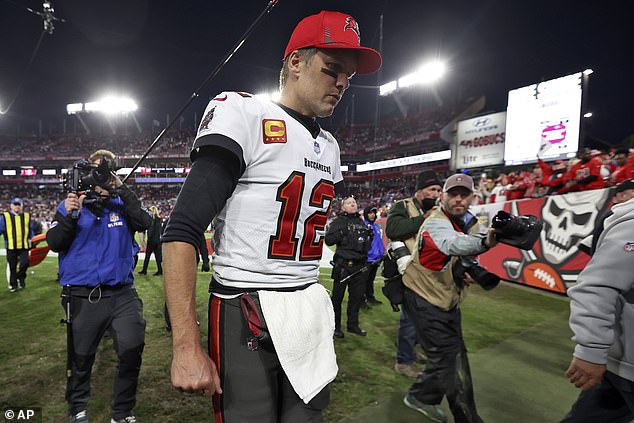 Tampa Bay Buccaneers quarterback Tom Brady, pictured, reacts as he leaves the field after the team lost to the Los Angeles Rams during an NFL divisional round playoff game Sunday 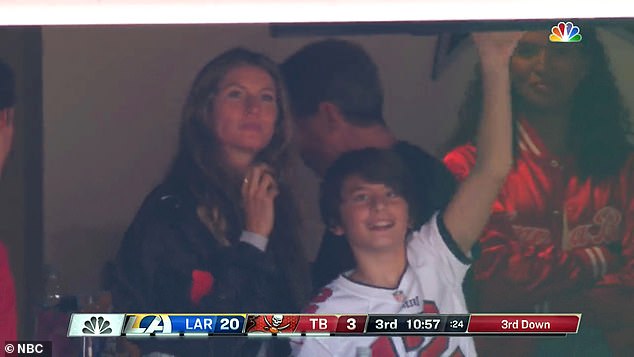 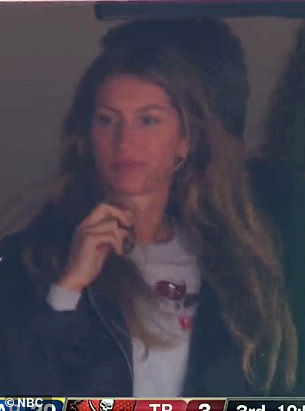 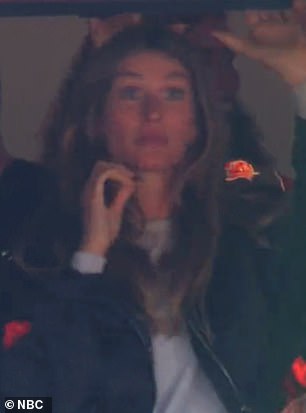 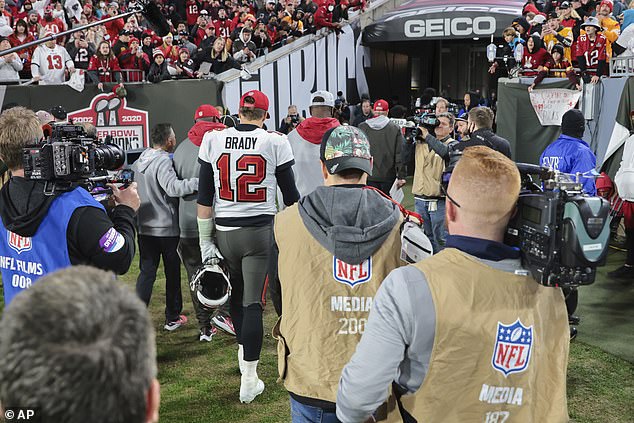 Brady, though, clearly still enjoys playing in the NFL, which he’s continued to do at a high level since taking over as the New England Patriots starting quarterback in 2001.

‘So when the time comes to think about post-career and second career I’ll think about those things.’

Brady insisted he is in ‘no rush to figure out what’s next.’

‘I’ll know when I know. It’s a day after the season,’ Brady said. ‘So I think for all of us, you know, we can all decompress a bit. It’s been six straight months of football, every day consumed by day in and day out football.’

This comes months after he launched his clothing brand.

The Tampa Bay Buccaneers quarterback posted a video to Instagram revealing his new brand to his more than 10.6 million followers.

In the video, Brady wore a white hoodie from the brand with his last name in large black lettering across the chest. 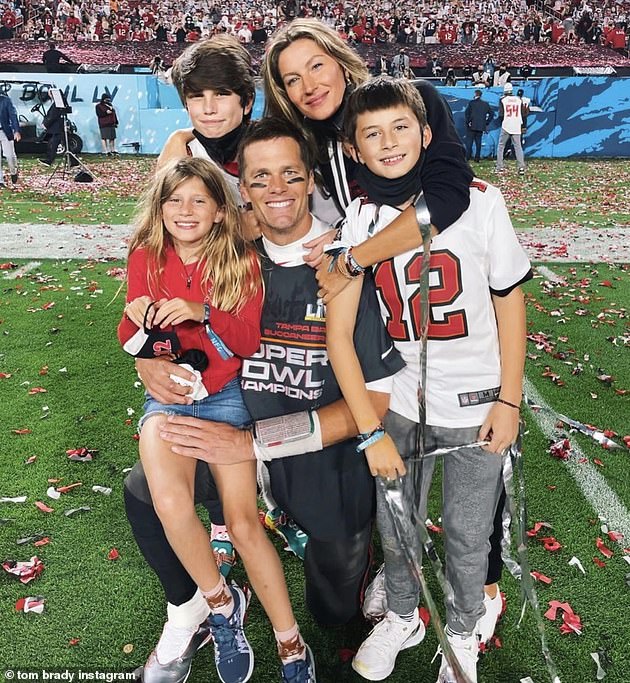 Family time: Tom has son Jack, 14, with ex Bridget Moynahan. He has two children with Gisele: Benjamin, 12, and Vivian, nine; seen in February 2021 after Brady won his seventh Super Bowl 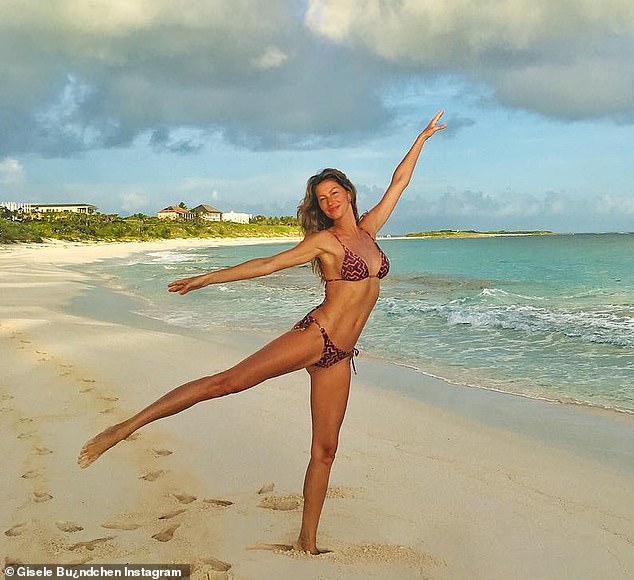 Not a bad spouse: And the 44-year-old athlete said he is ready to spend quality time with his wife, Vogue supermodel Giselle Bundchen 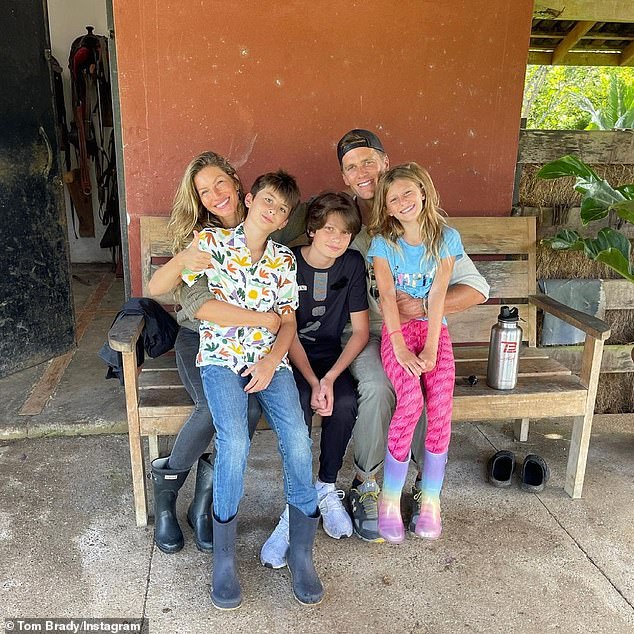 The Brady brood at play: The family seen on vacation in the tropics 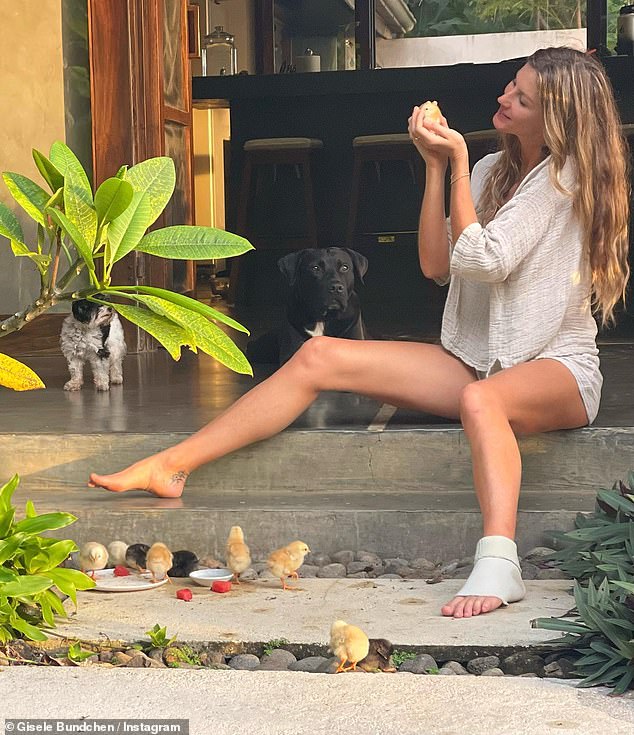 She loves the little things in life: The cover girl seen playing with chicks outdoors 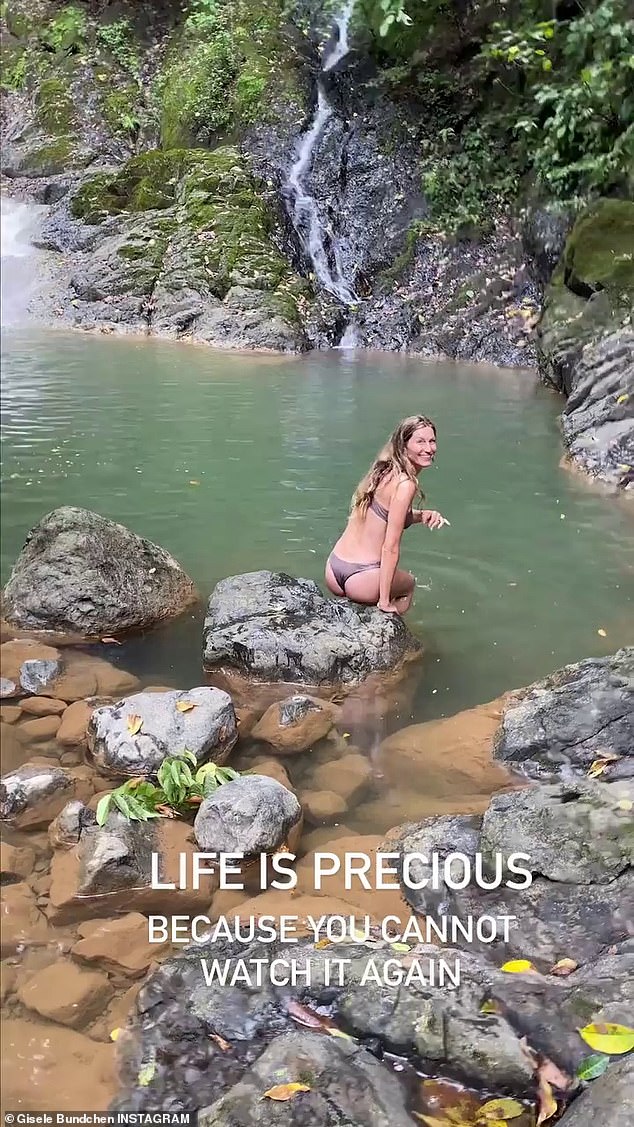 Life is precious: Bundchen posed in a bikini to tell fans that you ‘cannot watch life again’

I do: He shared a wedding photo taken in Santa Monica, California with ESPN 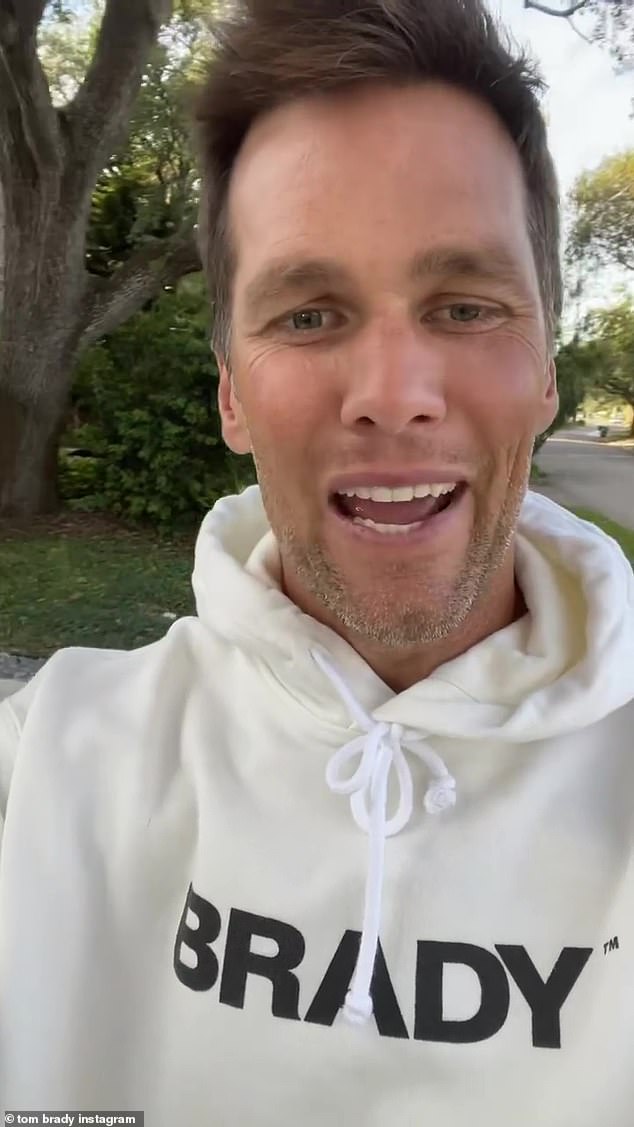 Brand launch: It’s taken years for Brady to get his clothing brand up and running, but he finally unveiled his collection last year

‘Hey everyone, today is officially the day,’ the star said while walking around his large estate. ‘After three years in the making, Brady Brand is officially launched. You can guys can shop our first drop, Release One, on bradybrand.com,’ he shared.

The seven-time Super Bowl champion added, ‘Listen, I’m proud to bring this to you guys looking for clothing that performs across all of your daily active lives.

‘Every item is unique, it’s innovative and it’s got great function and purpose. These are pieces I love, I’ve always wanted them and now they’re finally here.’

Brady tthen said: ‘There’s a reason ‘look good, play good’ is a cliché. Brandy Brand is going to make you guys feel your best. This is the beginning. I can’t wait to share what’s next.’ 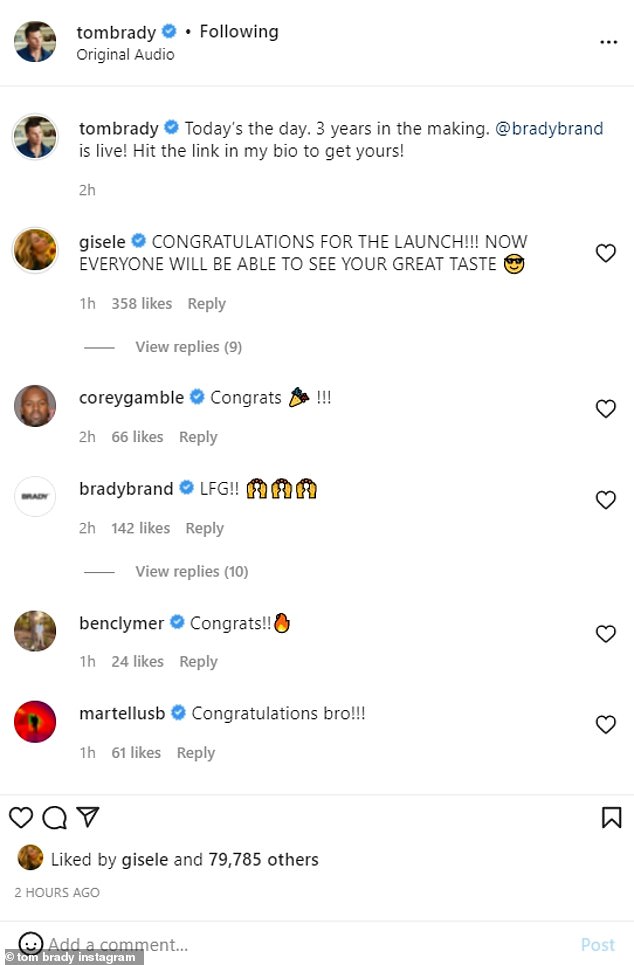 Famous friend support:  A number of Brady’s famous supports including Hugh Jackman and Corey Gamble shared messages of support in the caption

Brady also put several images promoting the launch on his Instagram story including one where the athlete stood arm’s crossed in a black and white photo.

Brady Brand boasts quite the collection of clothing including $75 athletic t-shirts and insulated vests for $250.

Some of the seven-time Super Bowl winner’s famous friends and fans congratulated him on the launch in the Instagram post’s caption.

Brady’s better half Bundchen posted a supportive comment for her husband of 12 years.

‘CONGRATULATIONS FOR THE LAUNCH!!! NOW EVERYONE WILL BE ABLE TO SEE YOUR GREAT TASTE,’ she wrote. 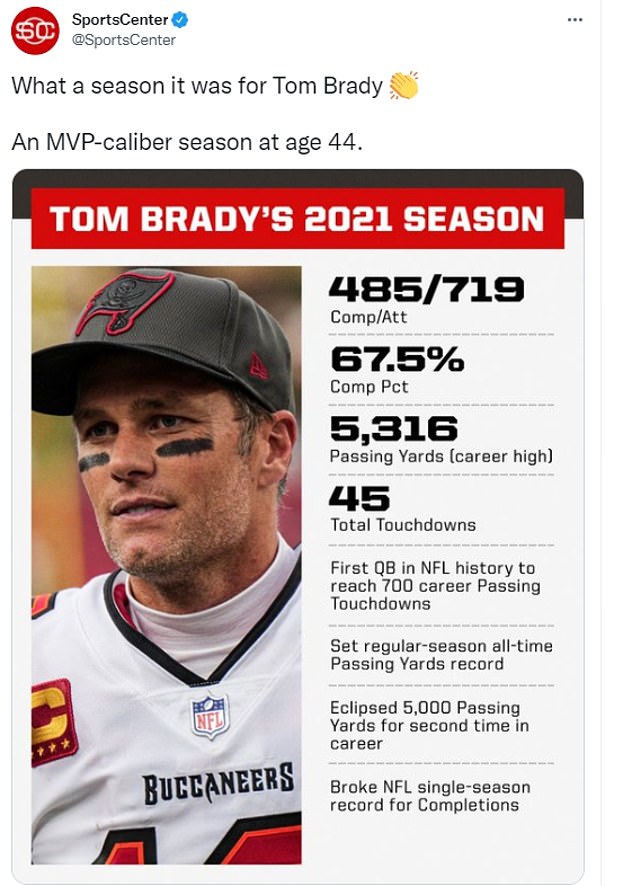 The 44-year-old’s season ended Sunday when he and the defending-champion Bucs were eliminated from the playoffs by the Los Angeles Rams with a last-second field goal at Tampa’s Raymond James Stadium. But the 30-27 Divisional Round defeat aside, Brady was still his prolific self in 2021, leading the NFL in completions (485), touchdown passes (43) and passing yards (5,316)