Auf Wiedersehen, wet! Timothy Spall, 64, looks fit and healthy as he strolls through rainy London in a waterproof jacket with wife Shane

Timothy Spall looked fit and healthy as he headed out for a lockdown walk with his wife Shane on Sunday.

Donning a practical rain coat, the actor, 64, was prepared for the British weather as he walked through drizzly London.

Spall, who became a household name after playing hapless electrician Barry in Auf Wiedersehen, Pet, sported a black waterproof jacket as he strolled through the city with his wife of 40 years. 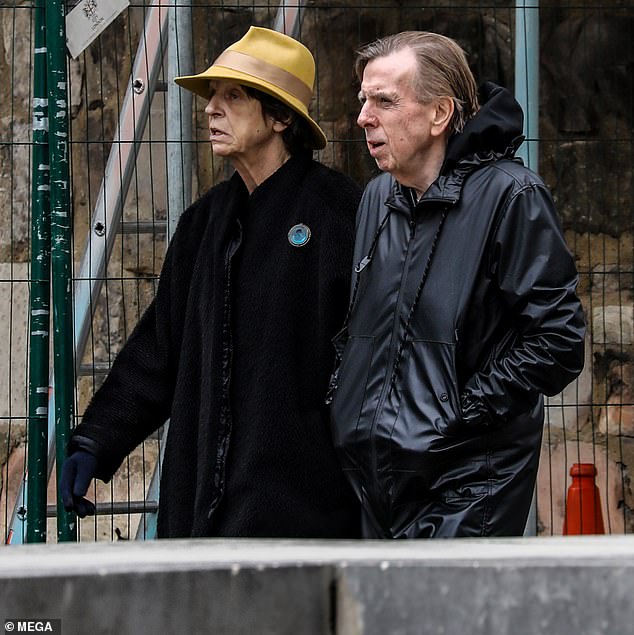 Out and about: Timothy Spall looked fit and healthy as he headed out on a lockdown walk with his wife Shane on Sunday

Walking alongside her husband, Shane, 67, looked ready for the overcast weather in a stylish yellow hat and a snuggly fluffy black coat.

The pair were deep in conversation as they meandered through the grey streets of the capital city.

Their outing comes after Timothy suggested to the Independent in 2019 that losing weight had affected his acting career. 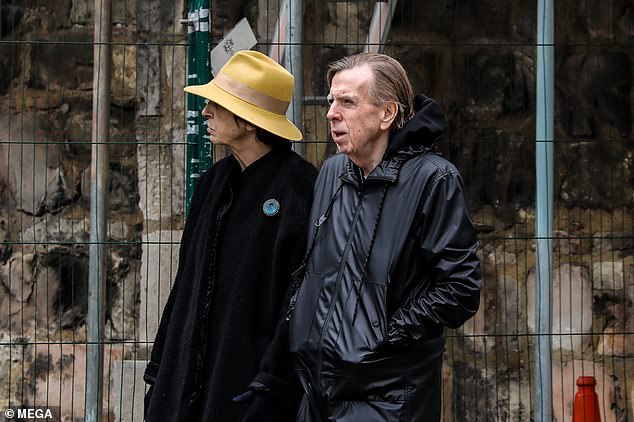 Prepared: The actor was prepared for the British weather as he donned a practical raincoat for the  walk through drizzly London with his wife Shane

He revealed:  ‘I knew it was risky because it can shut doors…but I knew that if I was lucky it would also liberate me.

‘I don’t know whether I’ve missed out on [parts], but only because nobody’s ever called me up and said, “Ahh, we were gonna use you when you were fat but now we can’t.”

Timothy’s weight loss began in 2014, when he shed a mass of weight and looked worlds away from the larger-than-life characters he is famed for playing. 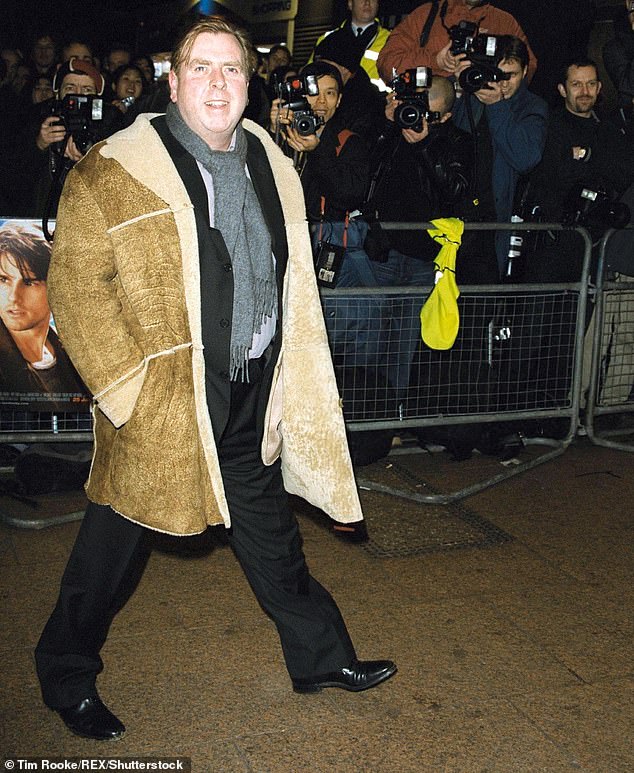 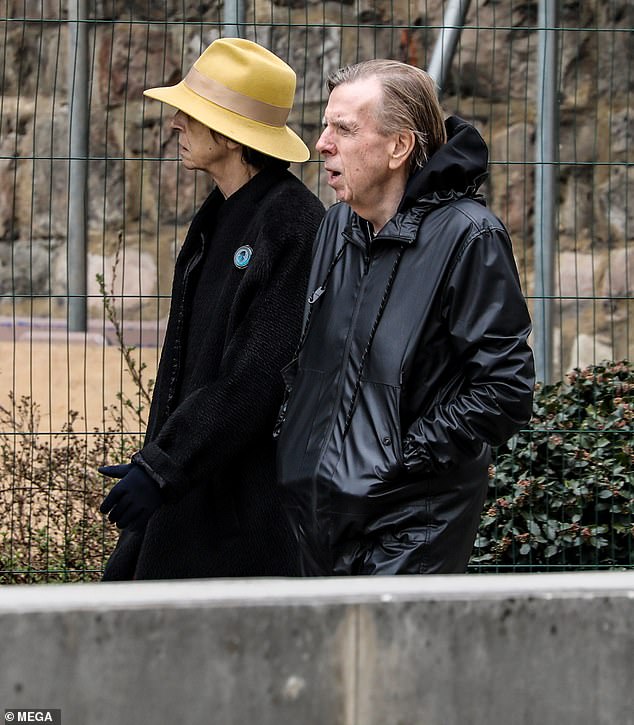 Prepared: Shane looked ready for the overcast weather as she stepped out with the actor in a stylish yellow hat and a snuggly fluffy black coat

While he has never revealed just how much weight he has lost, the star, who is known for his catalogue of acclaimed character work, enthused that his acting career is ‘no longer hobbled for being that avuncular round bloke.’

He told the Radio Times: ‘As a character actor, it’s put me in a position where I’m not hobbled by being a certain shape.

He continued: ‘I’m no longer that avuncular round bloke. It does feel liberating on many levels.’ 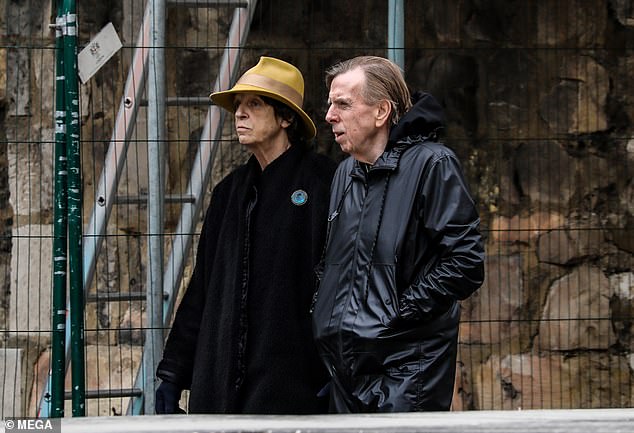 Chatting: The pair were deep in conversation as they meandered through the grey streets of the capital city 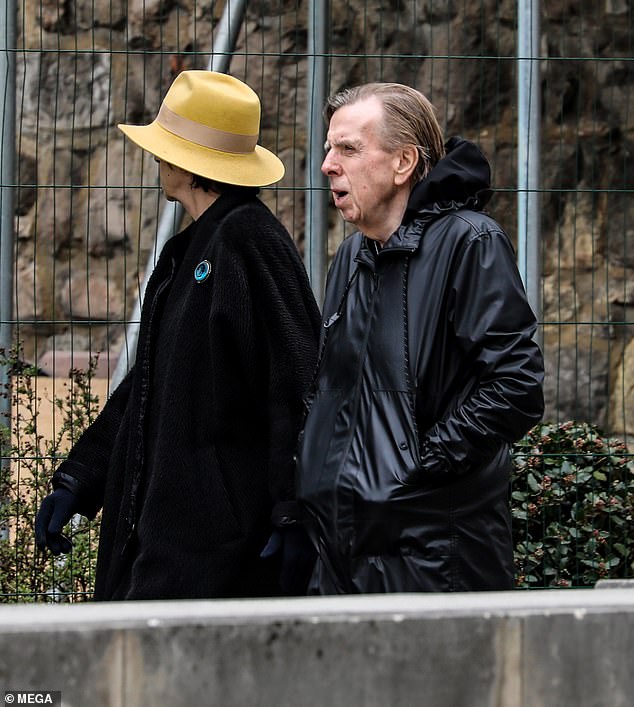 Best foot forwards: Timothy kept his feet dry in the soggy weather with a pair of light brown brogues

Timothy has remained relatively tight-lipped about the methods to shedding the pounds, while his actor son Rafe famously weighed 18.5 stone before adopting a healthier lifestyle.

The actor famously beat leukemia despite being given just days to live in 1996. He cut down on booze in 2014 after suffering from exhaustion.

He revealed retrospectively to Lorraine: ‘When you come out the other side… you realise that all those little daily aggravations are actually the texture of life, so you need to make the most of them.

‘I was a glutton. I loved food. I still do. But I didn’t have a thing in my mind that told me when to stop eating.

‘There’s something of a chunky gene in the Spall side of the family. I was always chubby, then I got fat.’ 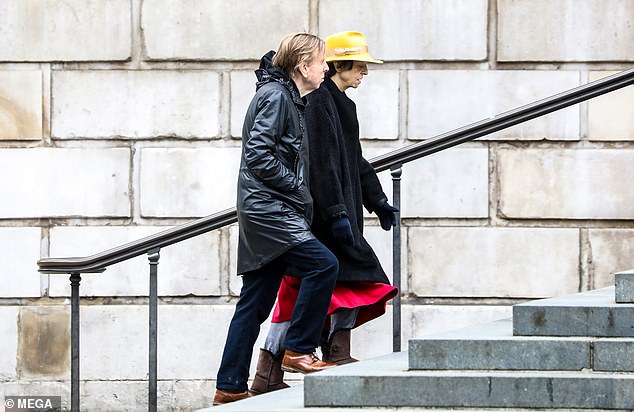 Daily steps: The outing comes after Timothy revealed he’d feared losing weight would effect his acting career but actually he felt ‘liberated’ after his transformation