‘It was 100 percent worth the wait!’: Tim Tebow marries pageant queen Demi-Leigh Nel-Peters in an ‘intimate sunset ceremony’ at Cape Town estate

Tim Tebow has married pageant queen Demi-Leigh Nel-Peters in an ‘intimate sunset ceremony’ in her home country of South Africa.

The couple held their half-hour nuptials at the La Paris Estate in Cape Town, according to People magazine.

Tim, 32, a devout Christian who vowed to stay abstinent until marriage, mixed tradition with a personal touch for his vows, wanting them to be ‘perfect.’

‘I want the vows to be perfect. I’m leaving in the traditional things like, ’till death do us part,’ but I’m also adding some of my own things to it.’

Demi-Leigh, 24, who’s a spokes model for David’s Bridal, wore a custom gown by the wedding dress giant, and accessorized with Marion Rehwinkel Jewelery. Meanwhile, Tim suited up in Antar Levar.

The cake was left to the wedding planner to decide, but the only request made by the couple for dessert was a Keto-friendly cheesecake so that ‘Tim can stick to his diet.’ 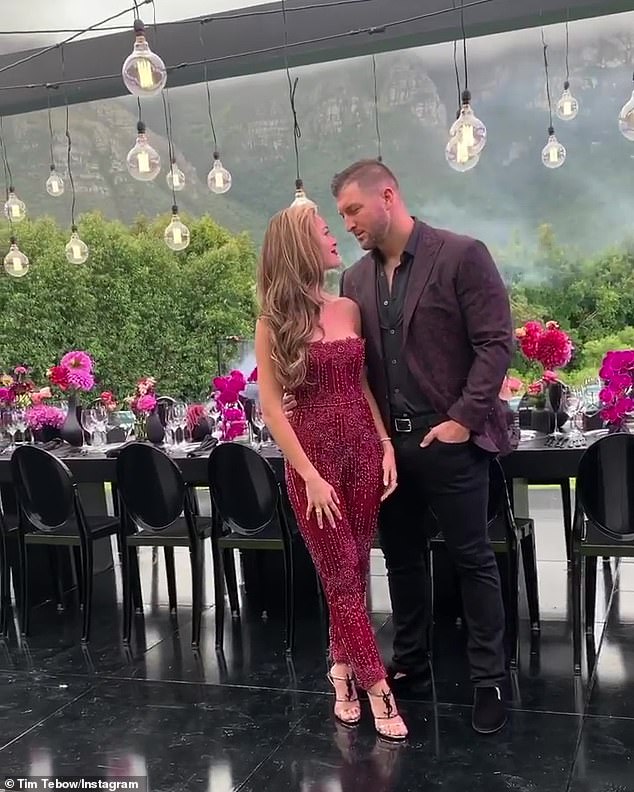 Mr. and Mrs.: Tim Tebow, 32, has married pageant queen Demi-Leigh Nel-Peters, 24, in an ‘intimate sunset ceremony’ in her home country of South Africa

The former Florida Gator two-time champion told People that there were ‘three things’ he was anticipating.

‘I’ve been looking forward to three things. The first moment I see her in her wedding dress, the first kiss, and the first dance together as man and wife. It’s such a special night.’

He continued, ‘I’ve been waiting my entire life for someone special, who I can spend the rest of my life with. I was waiting for the right person to come along. And now I’m marrying Demi. I can’t wait to see what our future holds. All of my dreams have come true. It was 100 percent worth the wait.’ 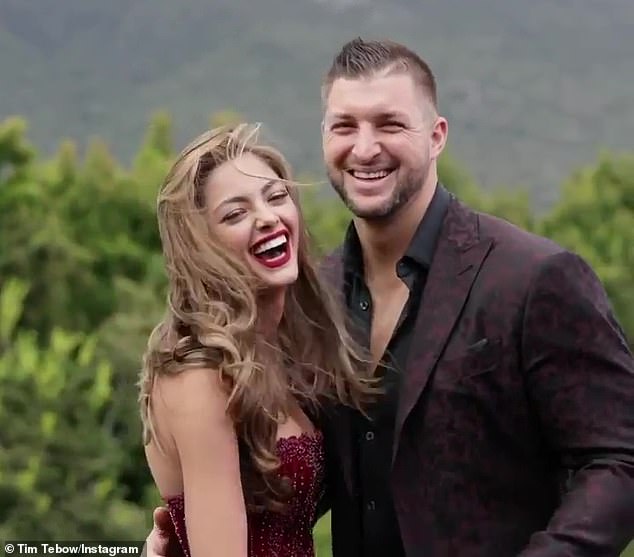 Their story: The couple, who have a gift registry on The Knot, met in 2018 at Tim’s annual Night to Shine event, which is a ‘worldwide prom for people with special needs’ 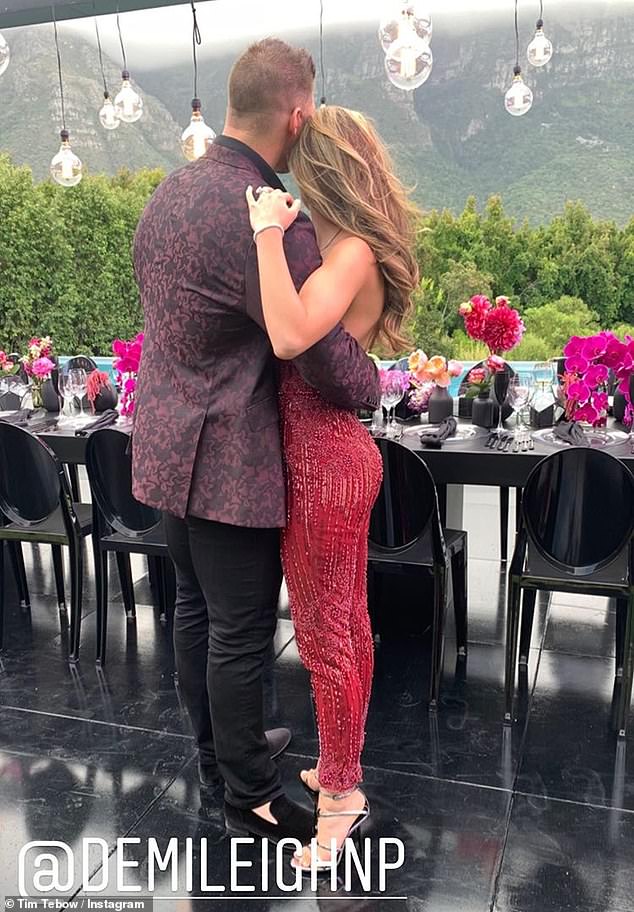 Tim, who previously played for the Denver Broncos, New York Jets, and joined the New England Patriots and Philadelphia Eagles for a few preseason games, took to Instagram Stories on Sunday to document the couple’s lavish rehearsal dinner.

The looked handsome in a burgundy, print suit layered over a black dress top. Demi-Leigh who was crowned Miss South Africa 2017, looked mesmerizing in a strapless sequin, red jumpsuit complete with silver heels. 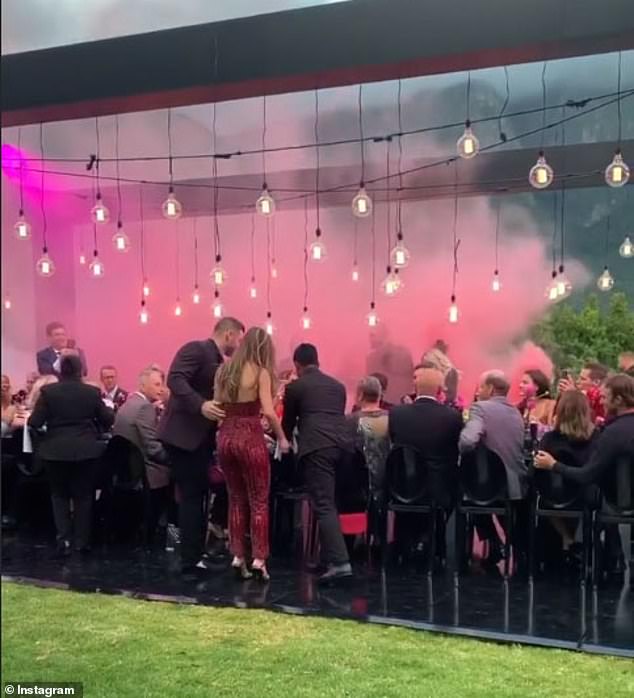 Seeing red: A smoke machine pumped out red smoke as the guests assembled for dinner 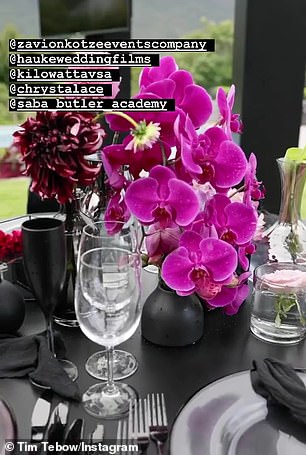 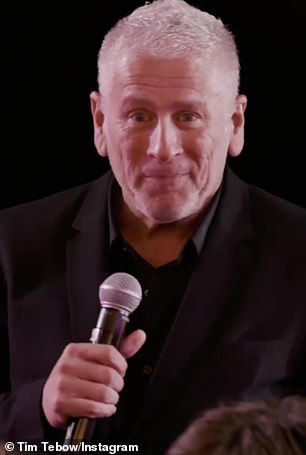 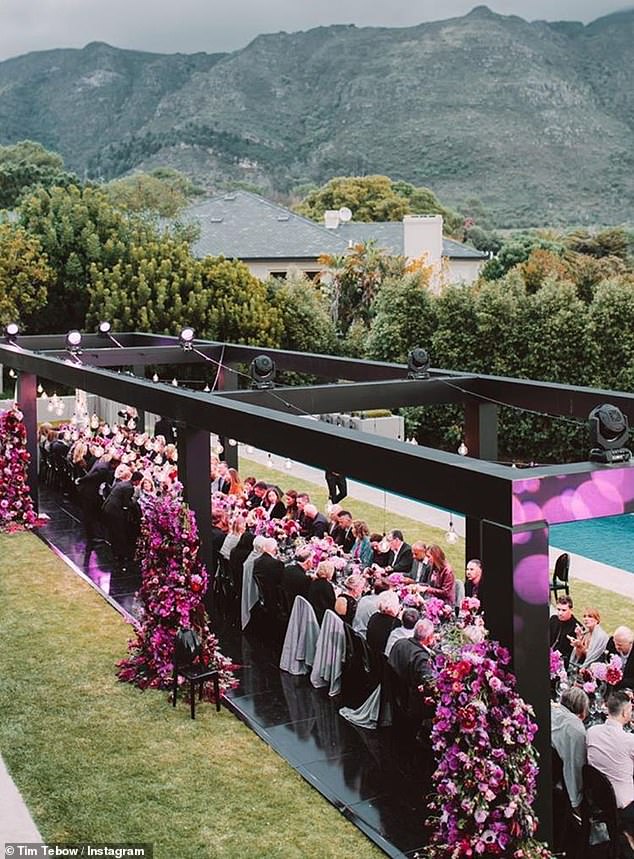 What a view: Guests enjoyed a meal overlooking stunning scenery in South Africa 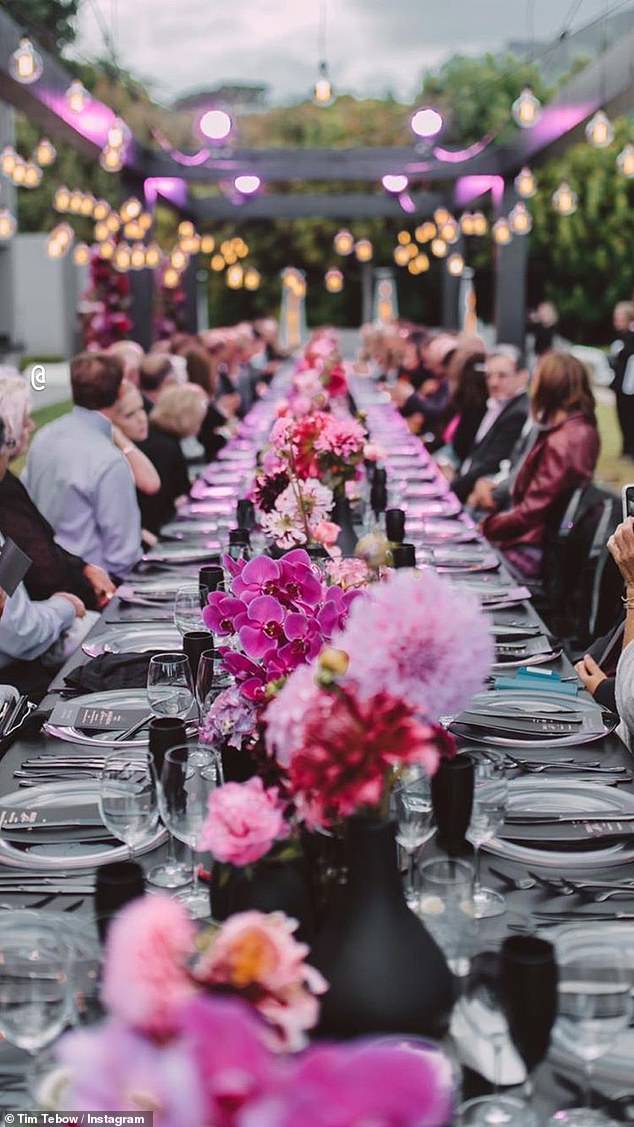 A dream: The elegant table setting was brought out by colorful flowers and hanging lights

The couple, who became engaged last January, met in 2018 at Tim’s annual Night to Shine event, which is a ‘worldwide prom for people with special needs.’

Demi-Leigh’s younger sister Franje, who tragically passed away last May, was born with special needs.

Demi-Leigh, who is also the second Miss Universe winner from South Africa, attended the event, and they began emailing back and forth, he told BravelyDaily.com, for their Youtube Channel.

‘So her sister has special needs, and we’ve had a Night to Shine in South Africa for the last few years and so she got invited to that and through that we connected, and then we emailed back and forth. And then texts and then calls and then all of a sudden we didn’t stop speaking…’ 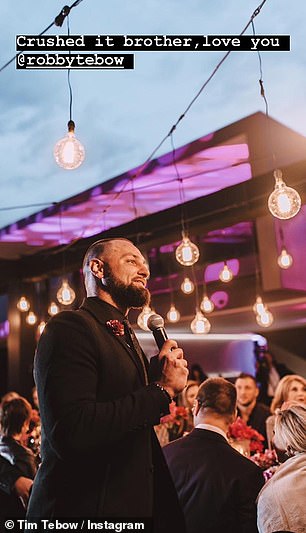 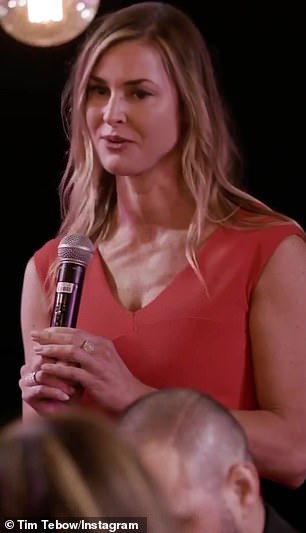 Proud: Tim’s older brother Robby took the mic (left) to give a speech in honor of his brother and his sister also shared some words, right 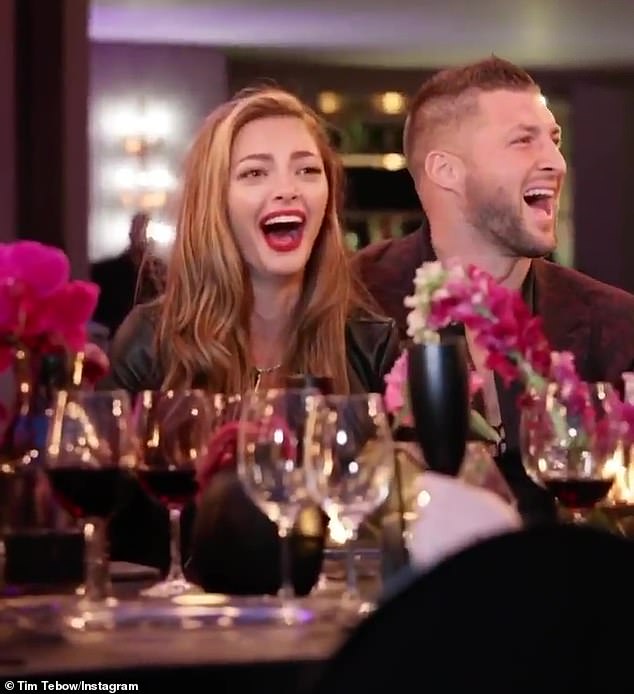 How cute: The couple shared a laugh as Demi-Leigh’s father made a joke during his speech

The positive role model said they both knew each other was the one about ‘the first or second time we hung out.’

Tim, who’s Christian beliefs have convinced him to remain celibate until marriage based on Hebrews 13:4, detailed how the couple kept to that promise.

‘It’s just a choice that we made that we both wanted to do that together, and just try to make it as special as possible.’

Currently, the ESPN college football analysts is playing baseball in the minor leagues. The New York Mets have ‘extended a spring training invitation’ to him, according to ESPN. 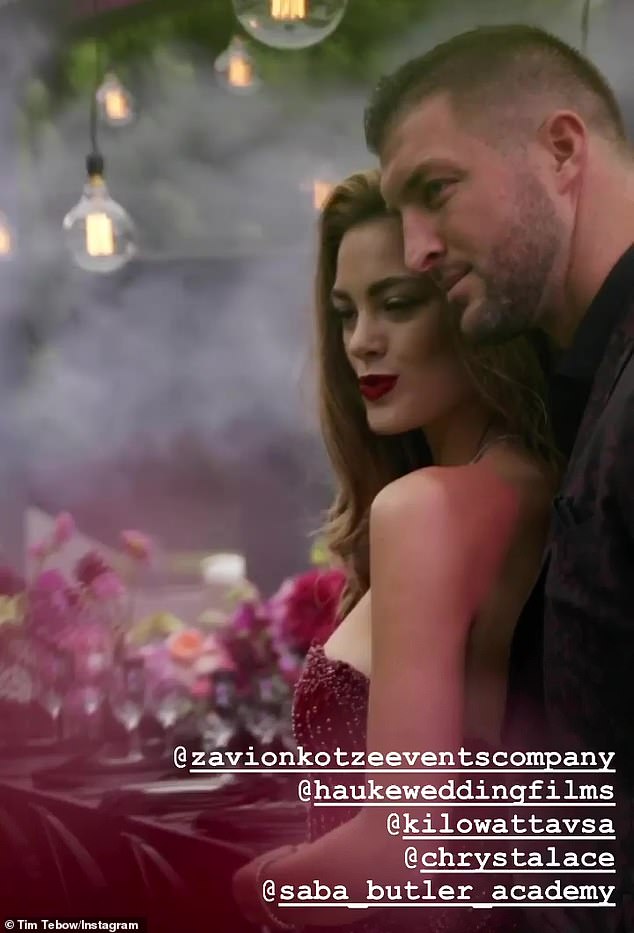 ‘It’s just a choice that we made that we both wanted to do that together’: Tim, who’s Christian beliefs have convicted him to remain celibate until marriage, detailed how the couple kept to that promise 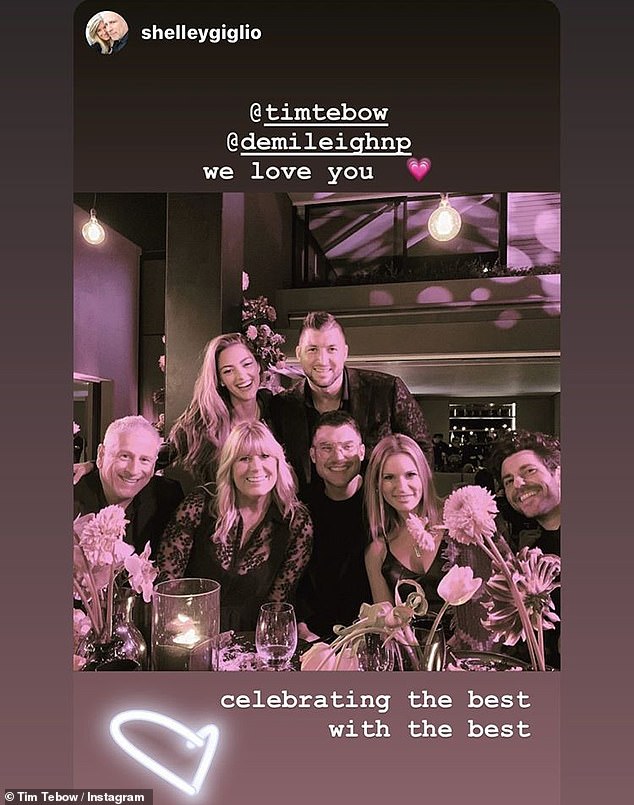