Holly Willoughby was moved to tears during Monday’s instalment of This Morning, as she discussed Prince Harry and Meghan’s exit from the Royal Family.

During the broadcast, a montage of the couple’s ‘best bits’ was played, prompting Holly, 38, to fight back tears as she admitted to feeling emotional over the affair.

However, the TV personality’s emotional display left a number of viewers baffled, as they also waded in with their opinions on the inclusion of a ‘best bits’ montage on Harry and Meghan’s romance. 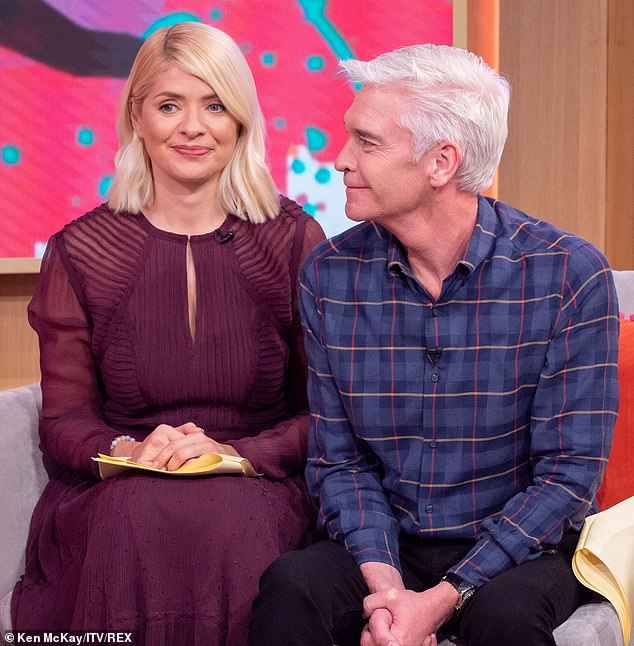 Emotional: Holly Willoughby got emotional as she discussed Prince Harry and Meghan’s imminent departure from the Royal Family during Monday’s instalment of This Morning

‘I can’t bear it,’ Holly admitted to her co-host Phillip Schofield after watching the footage of the Duke and Duchess of Sussex, who are planning to settle in Canada.

She also admitted that she felt ’emotional’ while watching Harry’s heartfelt speech at a private dinner for his children’s charity Sentebale on Sunday – where he spoke of his ‘great sadness’ about quitting his royal duties.

And viewers soon took to Twitter to share their feelings on Holly’s emotional reaction, a number of whom struggled to understand why she was so moved. 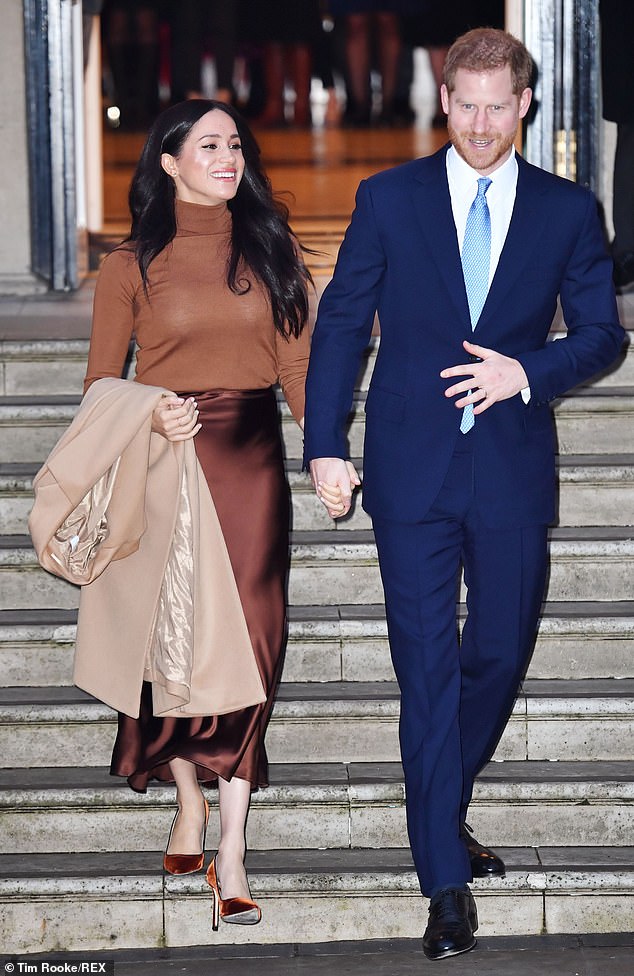 Quit: It was confirmed last week that the Duke and Duchess of Sussex would be giving up their roles while building a new life in North America. Pictured earlier this month

Wrote one viewer: ‘Why the hell was Holly crying? Can’t believe people are upset and even offended by their decisions.

‘I am happy for them and really hope it all works out. Although unfortunately I think the press interference will only intensify now sadly.’

Commented another: ‘#ThisMorning just had a REALLY cringey video montage of #HarryandMeghan & Holly Willoughby was crying!

‘WTF? It was like ; ‘Harry, Meghan, you’ve been voted out , these are your best bits!’ We don’t caaaaaaare!’ 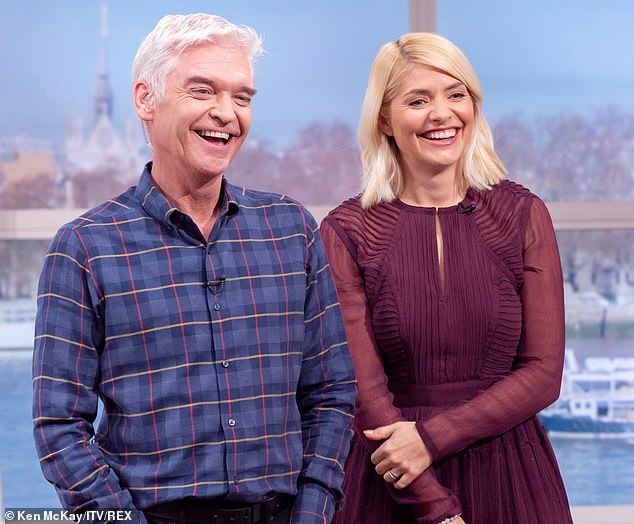 Baffled: This Morning viewers were baffled as they saw Holly (pictured with co-host Phillip Schofield) fight back tears after watching a ‘best bits’ montage of Harry and Meghan

‘This Morning really just broadcast a “best bits” montage of Harry and Meghan’s relationship… what in the world?’ stated a third, who added: ‘They haven’t been voted off a reality show, give me strength.’

Another found the choice of soundtrack for the montage amusing, writing: ‘this morning creating a video montage of meghan and harry to accidentally in love from the SHREK soundtrack is peak british TV ridiculousness.’ [sic]

A number of other viewers empathised with Holly’s show of emotion, with one tweeting: ‘I’m with you Holly ….it’s so sad #HarryandMeghan.’ 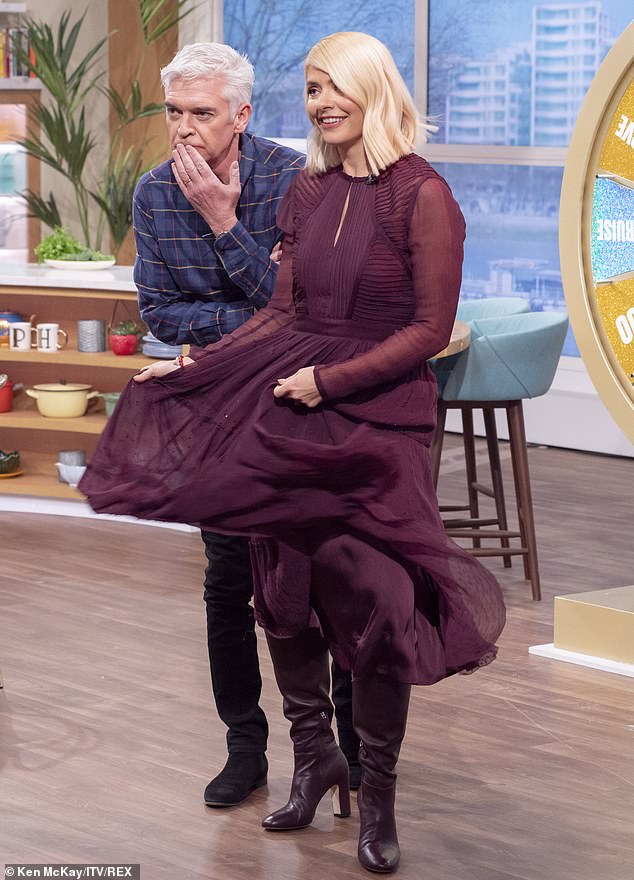 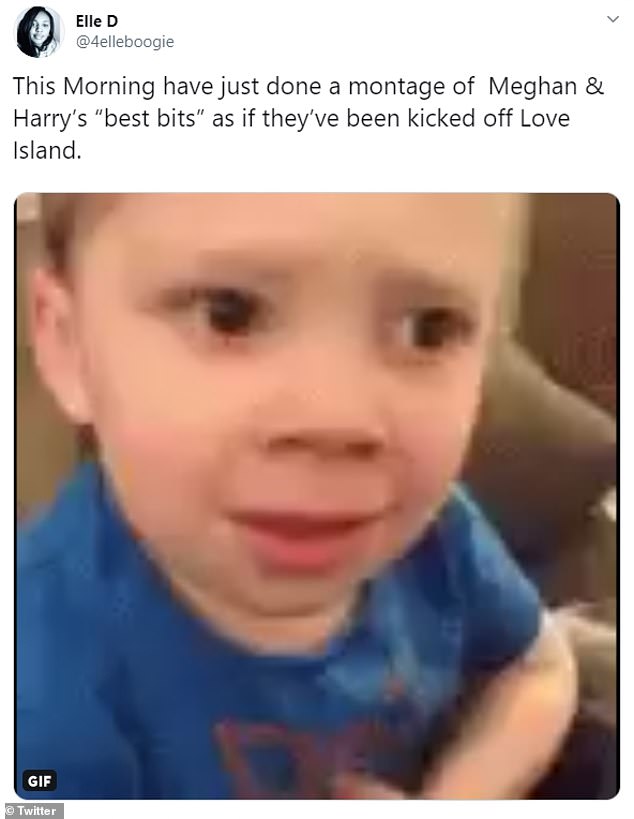 Montage: The broadcast included a discussion about the affair, dubbed Mexit, but a number of viewers struggled to get past the reality show-style montage that was included

‘Brought tears to my eyes, please leave them alone. Parents don’t always like the choices children make Can’t we just give them our blessing and leave them to try.’ [sic]

On Sunday night, Harry spoke of his ‘great sadness’ at leaving the Royal Family, but said he and Meghan had ‘no other option’ than to quit senior royal duties.

In an emotional speech, the 35-year-old said the UK is a place that he loves and that will ‘never change’ and the royal couple had hoped to continue serving the Queen, the Commonwealth and his military associations, without any public funding, but this was not possible.

Harry also paid a stirring tribute to his grandmother, calling her his ‘commander-in- chief’ and that he was ‘incredibly grateful’ to Her Majesty and the rest of his family for supporting him and Meghan. 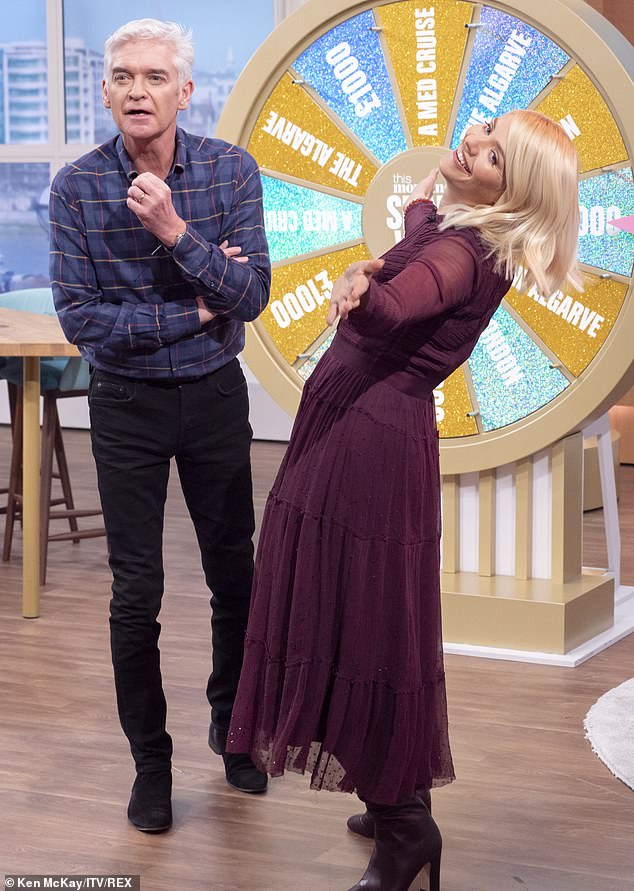 Larking around: The rest of the show saw Holly regain  her composure as she pressed on

Emotional speech: On Sunday night, the Duke of Sussex made an emotional speech about himself and wife Meghan quitting the Royal Family

Shared feelings: Many viewers appeared to empathise with Holly’s open display of emotion

He said: ‘Once Meghan and I were married we were excited. We were hopeful and we were here to serve. For those reasons it brings me great sadness that it has come to this.

‘The decision that I have made for my wife and I to step back is not one I made lightly. It was so many months of talks after so many years of challenges and I know I haven’t always gotten it right but as far as this goes there really was no other option.’

It comes after Saturday night’s statement from the Queen that Harry and Meghan will ‘not use their HRH titles’, as they look to forge a new life in North America.

As well as returning the £2.4 million spent on a lavish refurbishment of Frogmore Cottage, they will pay a commercial rent – estimated at up to £360,000 a year – to retain it as their British home. 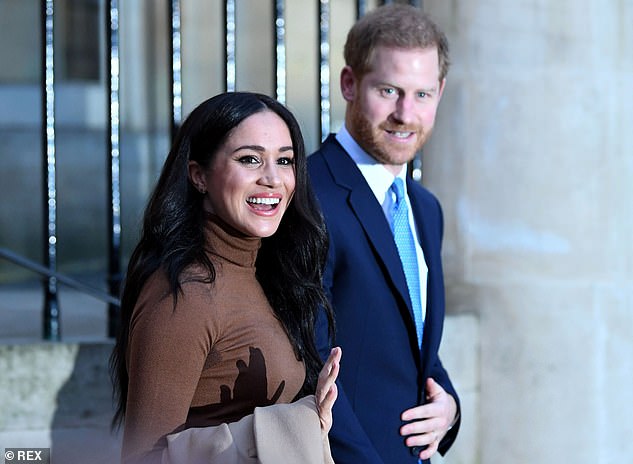 New horizons: It is believed that the couple will settle in Canada, after initially announcing that they would split their time between the UK and North America

‘Our hope was to continue serving the queen, the commonwealth and my military associations but without public funding.

‘Unfortunately that wasn’t possible. I’ve accepted this knowing that it doesn’t change who I am or how committed I am but I hope that helps you understand what it had come to that I would step my family back from all I have ever known to take a step forward into what I hope can be a peaceful life.’

The deal hammered out at Sandringham on Saturday stipulates that the pair, who will be known as Harry, Duke of Sussex and Meghan, Duchess of Sussex, will cease to be working members of the Royal Family from this spring and will not perform any official duties on behalf of the Queen – effectively leaving ‘The Firm’ completely. 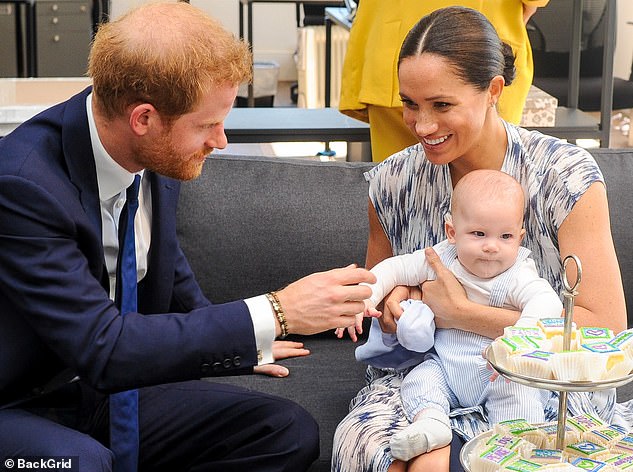 Family: Meghan has been in Canada with the couple’s son Archie since news of their departure from the Royal Family broke. Pictured in December 2019

By quitting their senior royal roles, they will sacrifice their HRH title.

On Sunday evening, the Duke of Sussex said the couple would continue to lead a life of service and were taking a ‘huge leap of faith’.

He added: ‘I will continue to be the same man who holds his country dear and dedicates his life to supporting the causes, charities and military communities that are so important to me.

‘Together you have given me an education about living and this role has taught me more about what it right and just than I could ever have imagined. We are taking a leap of faith so thank you for giving me the courage to take this next step.’ 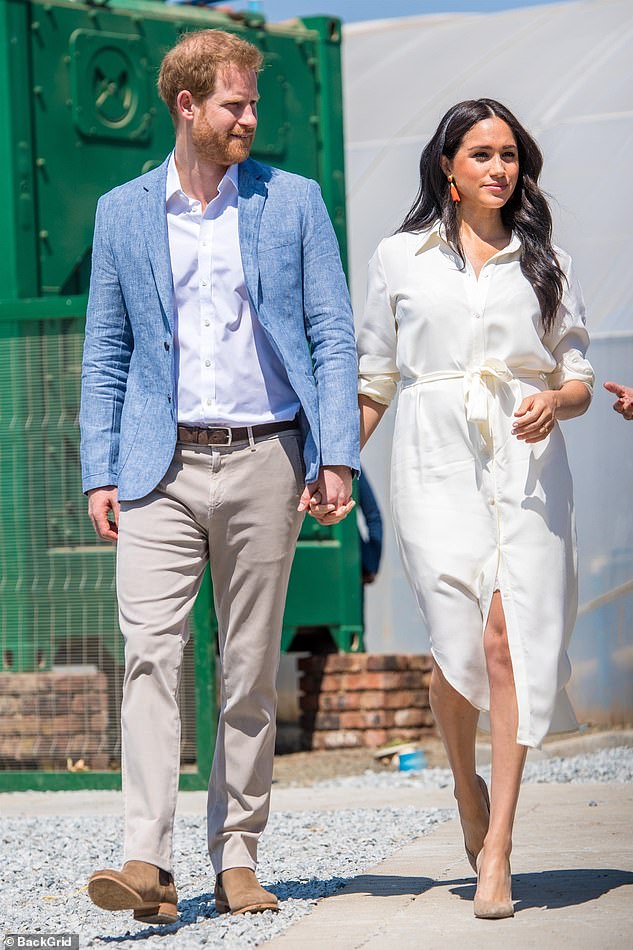 Sacrificing titles: By quitting their senior royal roles, the couple will sacrifice their HRH title

In an adorable moment, Harry also revealed his son Archie, who is in Canada with Meghan, recently saw snow for the first time.

He told the audience: It has been our privilege to serve you, and we will continue to lead a life of service. So in that respect, nothing changes.

‘It has also been a privilege to meet so many of you and to feel your excitement for our son Archie – who saw snow for the first time the other day and thought it was bloody brilliant!

‘I will always have the utmost respect for my grandmother, my commander-in-chief, and I am incredibly grateful to her and the rest of my family for the support they have shown Meghan and I over the last few months.’ 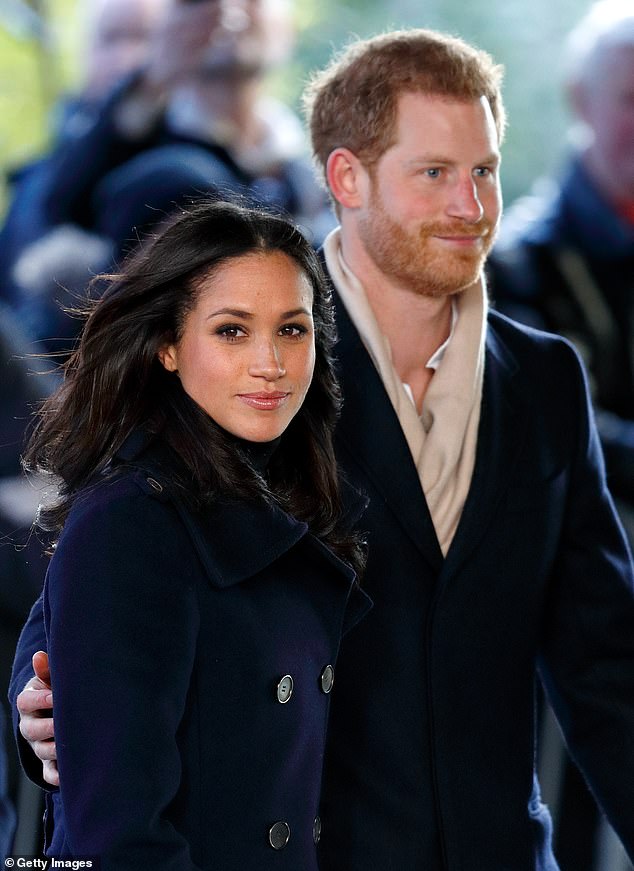 Leap of faith: On Sunday evening, the Duke of Sussex said the couple would continue to lead a life of service and were taking a ‘huge leap of faith’