Prince Harry was forced to face his family earlier than he may have planned after his sit-down interview with Oprah Winfrey that caused some major tension. The interview aired on March 7, and about a month later, Harry’s grandfather, Prince Philip, died. Harry made the trip across the pond to attend Philip’s funeral, which was held on April 17 at St. George’s Chapel. All eyes were on the Duke of Sussex as he walked into the chapel for the funeral service, marking the very first time he had been seen with his family since he decided to move out of the UK, according to Page Six.

Many were wondering if Harry would have conversations with his father, Prince Charles, and his brother, Prince William, or if he would have a chance to meet one on one with his grandmother, Queen Elizabeth, or if conversations about the Oprah interview would be off the table given the fact that the royal family was mourning the loss of their patriarch. There were several rumors that Harry was able to have talks with Charles and William, including a report from the Daily Mail in which journalist Dan Wootton claimed that the three men met together “so that nobody’s words could be misconstrued afterwards.”

There hasn’t been much information about Harry’s presumed meeting with his grandmother, however, until now. Read on for the new details. 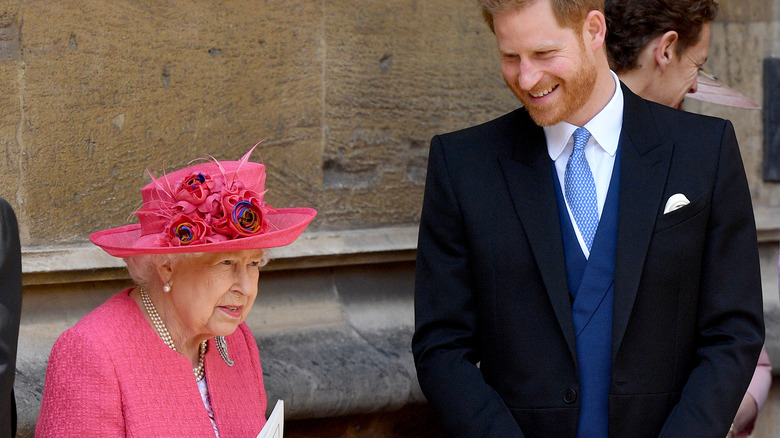 In an updated version of the book “Finding Freedom,” authors Omid Scobie and Carolyn Durand have revealed that Prince Harry and Queen Elizabeth did indeed have a chat back in April when Harry was in town for Prince Philip’s funeral, according to Town & Country. While it is unlikely that the two really got in to the nitty gritty of the things that were said during Harry and Meghan Markle’s interview with Oprah Winfrey — given the circumstances — a source told Scobie and Durand that Harry did get some time to meet with his newly widowed grandmother. “To see each other after so long apart, the longest he hadn’t seen the Queen for, was very special. Despite everything that has happened, he has the utmost love and respect for her. Her life of duty and service is one of the many ways in which she has inspired him to also serve,” a source said.

Harry did not see the queen during his trip to the UK in June, according to Express, but is believed to be in somewhat regular contact with her via telephone and video calls. In fact, after his daughter, Lilibet Diana, was born on June 4, People magazine reported that Harry and Meghan introduced the newborn to her great-grandmother via Zoom. It’s unknown when Harry will reunite with his grandmother again, but, rumor has it, he is heading to the UK in September, according to the Daily Mail.