Oscar-winning filmmaker Mel Gibson has a history of making antisemitic and racist comments, but the “Lethal Weapon” star has avoided endorsing any specific presidential candidate. In an interview about the 2016 presidential race between Trump and Hillary Clinton, Gibson didn’t appear to be a fan of either candidate. “The good news about this presidential campaign is that it will soon be over, of course, and the bad news is that one of the bad candidates will be elected,” Gibson said. However, some of Gibson’s less-than politically correct statements have earned him comparisons to Trump.

According to The Sun, Gibson made anti-semitic comments in 2006 after his arrest for a DUI. However, the British outlet reported that Gibson’s habit of making offensive comments was not isolated. The Sun reported that actor Winona Ryder accused Gibson of making antisemitic and homophobic comments as far back as the 1990s; she told the Sunday Times about her experiences with the “Lethal Weapon” actor. Ryder said, “We were at a crowded party with one of my good friends, and Mel Gibson was smoking a cigar, and we’re all talking and he said to my friend, who’s gay, ‘Oh wait, am I gonna get AIDS?'” Ryder also said that he made antisemitic comments to her directly.

So what’s the truth about Gibson and Trump? Keep reading to find out more. 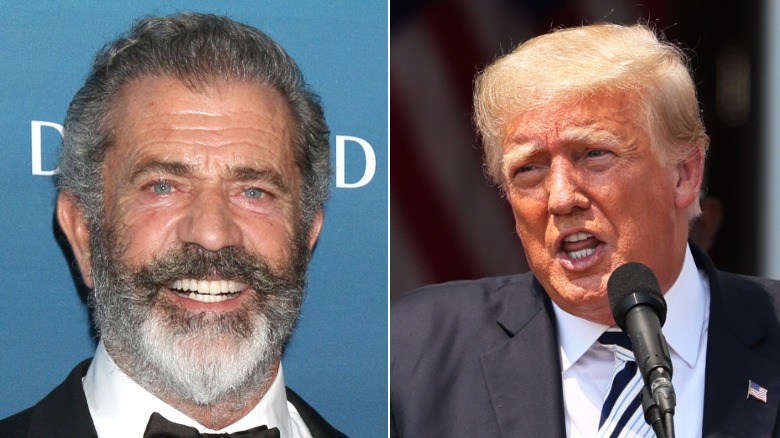 Mel Gibson gave Donald Trump a military salute when the former president arrived at the UFC fight between Conor McGregor and Dustin Poirer in Las Vegas on July 10. According to The Daily Beast, a TikTok video of Gibson’s salute to Trump spread online and quickly made headlines. The crowd at the UFC fight welcomed the former president with both loud cheers and boos as he arrived. Conservative media outlet The Columbia Bugle tweeted a video of the moment, writing, “Yoooooo!!! Is that Mel Gibson saluting President Trump? #UFC264.”

But Gibson’s salute to Trump created a social media backlash about the actor’s political views. In a 2020 interview with Fox News via (UK Independent), Gibson told the conservative news outlet that he wasn’t an expert and didn’t think he was qualified to make political judgments. But the actor revealed a little about his political leanings during the Fox News interview. “I am politically incorrect, that’s true. Political correctness to me is just intellectual terrorism,” Gibson said. “I find that really scary, and I won’t be intimidated into changing my mind. Everyone isn’t going to love you all the time.” So even Gibson doesn’t want to label his politics, his salute of Trump makes it seems like he shares at least some of Trump’s views.