A few years removed from director Christopher Nolan’s wildly successful Dark Knight trilogy, Warner Bros. saw their superhero rivals Marvel in the midst of putting together something at a scale that hadn’t been done before: a series of movies, all featuring different heroes and different combinations of heroes, all connecting in one way or another and crossing over. Many tried before, but Marvel was putting together the most successful cinematic universe in history. With some of the greatest standalone superhero movies in their back pocket already with Nolan’s movies and director Richard Donner’s original Superman franchise, WB looked at Marvel, and, starting with 2013’s Man of Steel, said: “We can do that.”

It hasn’t turned out to be that easy. At this point, WB and DC Studios have put out nine feature films in their connected world (officially known as the “DC Extended Universe”) while Marvel has reached 23. Marvel got a head start, so the quantity isn’t necessarily the issue; the quality, though, mostly mucked down by director Zack Snyder’s dark, dreary, and humorless films presents more of an issue.

Still, though, for those of us who love heroes of all shapes and sizes flying through the air and facing off with bad guys, it can be fun to keep up with the worlds and see how everything fits together. Hell, some of the movies end up being pretty fun; it takes charisma to be a superhero, so typically all it takes is a good villain for the movie to be at least watchable. So if you’re a DC loyalist, or maybe if you’ve already watched the entire Marvel Cinematic Universe so far, and you’re looking to give a whole new world a shot, well, there are certainly less entertaining ways to spend your time.

Like Star Wars, Marvel, and the now-discontinued series of X-Men movies, we’re going to suggest that if you plan to watch the entirety of the D.C. Extended Universe, that you watch them in the order in which they were released. Films and reveals are designed specifically with that intent, particularly upon a first watch. If something is a big reveal but you haven’t watched the connecting movie being referenced yet, well, you’re going to miss that reveal. If you’ve already seen the movies, then, sure, get creative if you want. But the first time through any franchise, really, should be in their chronological order by release.

People who like to get cute often like to deprive themselves of some of those reveals and watch movies in “timeline order,” meaning in order of the events happening within the universe.

As usual, we wouldn’t recommend this, but if you really insist, this would be the chronological order of events within the universe, following each movie’s main plotline (some of them do jump around a bit; another reason to just watch these movies in the order they came out):

The above list doesn’t include previous movies based on DC Comics properties—like Christopher Nolan’s Batman movies or any prior Superman movies, for instance—because they aren’t connected to the DC Extended Universe. The same reason is what causes 2019’s Joker to be excluded; it was made in the modern DC era, but is not planned to connect to the larger DC Extended Universe. The same will apply to the upcoming Matt Reeves/Robert Pattinson The Batman series—those films are expected to take place in their own siloed universe, while Michael Keaton might just play this main timeline’s Dark Knight.

But we digress. There are already plenty of movies for you to watch in the DC Extended Universe (and they are all on HBO Max!), and more are steadily on the way. Wonder Woman 1984 was just released on Christmas 2020, and James Gunn’s reboot/sequel The Suicide Squad will come at some point in the middle of this year (and his Peacekeeper spin-off series with John Cena could hit HBO Max before the end of the year).

But for the proper order—chronological by release date—we’d suggest the following:

Man of Steel is an appropriate entry to the first half of the DC Extended Universe: unnecessarily dark, fairly joyless, and ultimately underwhelming. It’s certainly a watchable movie: Henry Cavill’s first outing as superman is not exactly charismatic but it’s fine, Amy Adams is amazing but the Lois Lane character is underwritten, and Michael Shannon’s turn as villain General Zod is far under his usual excellence. If you want an entry point to the DCEU this isn’t a bad spot, but it’s not a great movie.

Three years later, the DCEU continued as Cavill and Adams were joined by Ben Affleck (as Bruce Wayne/Batman), Jesse Eisenberg (as Lex Luthor) and a handful of others in this first ever cinematic face-off between the Man of Steel and The Dark Knight himself. Unfortunately, the movie suffers from the same problems as Man of Steel: it’s overwrought, overdramatic, and takes itself far too seriously. It is what it is; Eisenberg’s Luthor is actually a fun turn, but the movie, again, is kind of a slog to get to, and at times doesn’t even really make all that much sense. But if you love superheroes, it could be worse.

There’s not beating around the bush: Suicide Squad is one of the worst blockbuster movies you’ll ever see. This movie should work: a team of imprisoned villains and scoundrels are brought together and freed for the purpose of performing what’s deemed a suicide mission. A Ben Affleck cameo ties things together, and the cast includes Viola Davis, Joel Kinnaman, Will Smith, Cara Delevigne, Jared Leto, and Margot Robbie. Unfortunately, Robbie is the only one who brings her A-game to the movie (put her in things as Harley Quinn forever). Quite literally nothing else, except for a couple musical cues, works at all.

Leto and Smith are aggressively bad in their roles for distinctly different reasons. Leto’s Joker kind of works in theory, but he so wildly overplays it in his limited screentime that it’s a joke, and not the kind of joke he was probably hoping for. Smith wasn’t given the gift of good writing at all, but his delivery is bad, and it’s clear that he refuses to accept the fact that he’s playing a bad guy; instead of dialing into his character’s immoral nature, he plays him as a wrongly accused hero. It doesn’t work at all. And don’t even get us started on Delevigne as the movie’s main villain, a witch named Enchantress; it…it just does not work. At all.

The most upsetting part about all of this is that it’s a pretty damn good concept—hopefully James Gunn’s upcoming reboot/sequel, where Robbie, Viola Davis, and Jai Courtney, among others, will return, will get it right. But as far as the DCEU’s continuity goes, if you want to watch in order, well, you’ve gotta watch.

Wonder Woman is actually good! The movie was a smash hit at the box office and pretty damn successful with critics alike upon release in 2017. While Gal Gadot’s Diana Prince had already been introduced in Batman v Superman, Patty Jenkins’ wonderfully directed Wonder Woman gives us a background story we can buy into about the Amazonian superhero. Chris Pine proves his place on the Mount Everest of Chrises as Steve Trevor, Diana’s badass pilot love interest. There are a number of memorable action sequences throughout the film, and the overall plot feels accordingly epic, while still fitting in with the other surrounding universe pieces.

Unfortunately, things went back to bad with Justice League in 2017. Let’s talk about the bright spots first: Ezra Miller is actually fun as The Flash, and the first real look at Jason Momoa as Aquaman show him to be a pretty fun character too. Cavill is fine here (though he has an awkwardly-digitally-removed mustache), as are Gadot and Affleck. But the movie is kind of a mishmash of things, and the villain is generic and awful.

Due to a personal tragedy, Zack Snyder exited production before Justice League concluded and Avengers director Joss Whedon ended up controversially finishing the film. As a result, years later, a fan campaign eventually resulted in Snyder’s re-filmed, re-edited, four-hour-long cut of Justice League entering production. It’s expected to be released in 2021 on HBO Max, but, honestly, if the teaser’s are any indication, we’re not expecting much better. 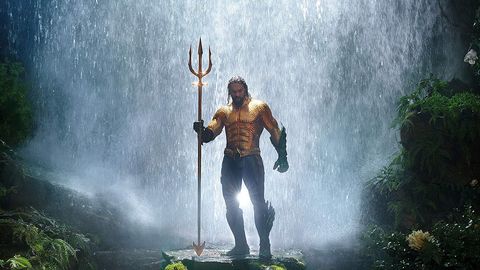 At least Aquaman is self-aware enough to not take itself that seriously; Jason Momoa plays a version of Aquaman that comics and cartoons never really portrayed, and he laughs and grins between the overwrought drama and action at least. This movie has an absolutely stellar supporting cast, including Nicole Kidman and Temuera Morrison as Aquaman’s parents, along with villains played by Yahya Abdul-Mateen II and Patrick Wilson, supporting players Randall Park and Amber Heard, and Willem Dafoe riding around on a seahorse. 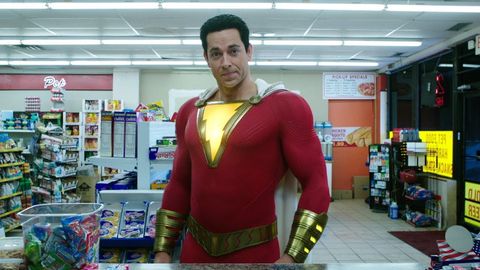 The aptly-titled Shazam! follows Aquaman’s lead in not taking it anywhere near as seriously as its preceding films. Shazam! plays kind of like an adventure film from the ’80s, following a kid named Billy Batson in a foster home who suddenly gets mystical, Superman-esque powers and becomes an adult version of himself (played by Zachary Levi). Jack Dylan Grazer is, as usual, a charming kid as Billy’s friend, and Mark Strong, as usual, plays a great villain. Doesn’t directly tie in with the rest of the DCEU until the very end, but we’ll be seeing Mr. Shazam! again.

Birds of Prey is the most fun—and overall best—movie in the DC Extended Universe. Centering on a post-breakup Harley Quinn (thank you, writers, for excluding this universe’s Joker from the narrative), the movie finds her on a wacky, anti-hero, renegade journey through Gotham’s criminal underworld, coming into contact with a host of other badass women including a cop played by Rosie Perez, a singer played by Jurnee Smollett, and a vigilante played by Mary-Elizabeth Winstead. And the movie’s villain, Roman Sionis/Black Mask, is played with some much-needed fun and gusto by the always-fun Ewan McGregor. McGregor and Robbie here are probably giving the two best performances by anyone in the entire DCEU.

The most recent entry in the DCEU was just released simultaneously in theaters and on HBO Max as the first trial in WB’s expansive plan that, for now, will be in place throughout 2021. The movie certainly makes some big swings, and its casting can’t be blamed: aside from the returning Gal Gadot and Chris Pine, the movie adds Kristin Wiig and Pedro Pascal as villains. Both villains give it a damn good effort—and Pascal really goes herculean with the ham, something that certainly does’t hurt the movie. The movie doesn’t entirely work (and doesn’t really connect to anything else in the DCEU), but the reasons aren’t quite the same as the earlier films in the franchise; WW84 isn’t too dark or dreary—it just kind of becomes too much. Hard to get too much deeper without spoiling, but there’s a lot of disbelief suspension required to make it all the way through this overstuffed flick.