The fan favorite show was the night’s biggest winner, with seven awards including a sweep of the dramatic acting categories.

The series beat out The Boys, Bridgerton, The Handmaid’s Tale, Lovecraft Country, The Mandalorian, Pose, and This Is Us for the accolade. The trophy also gave Netflix its first win in the most elite of Emmy categories.

The Crown won for its fourth season, which followed the British royal family in the 1980s and 1990s with Olivia as Queen Elizabeth II, Josh as Prince Charles and Emma as Princess Diana.

Taking home Outstanding Lead Actress In A Drama Series was Olivia, 47, for her role as Queen Elizabeth II, who revealed her father died during Covid as she paid tribute to him in her acceptance speech. 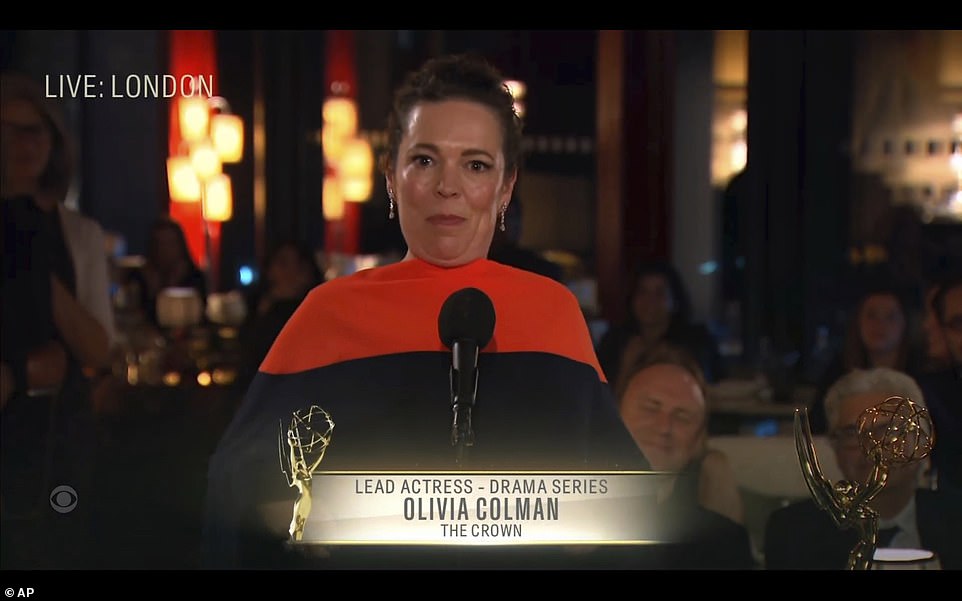 ‘I lost my daddy during COVID’: Taking home Outstanding Lead Actress In A Drama Series was Olivia, 47, for her role as Queen Elizabeth II, who revealed her father died from Covid as she paid tribute to him in her acceptance speech

Olivia had not previously announced her father’s passing but revealed she lost her father during the pandemic.

Visibly emotional, Olivia said: ‘I’m going to be very quick because I’m very teary as I wish my dad was here to see this,’ she said shakily. ‘I lost my daddy during COVID, and he would have loved all of this.’

Olivia accepted the award via video link from an Emmy Celebration at the Soho House where she was joined by co-stars Gillian, Emma, and Emerald Fennell.

Earlier in her speech, Olivia expressed shock over taking home the trophy, quipping that she ‘would’ve put money on that not happening.’

She continued: ‘What a lovely end to this extraordinary journey with this lovely family. I loved every second of it and I can’t wait to see what happens next.’ 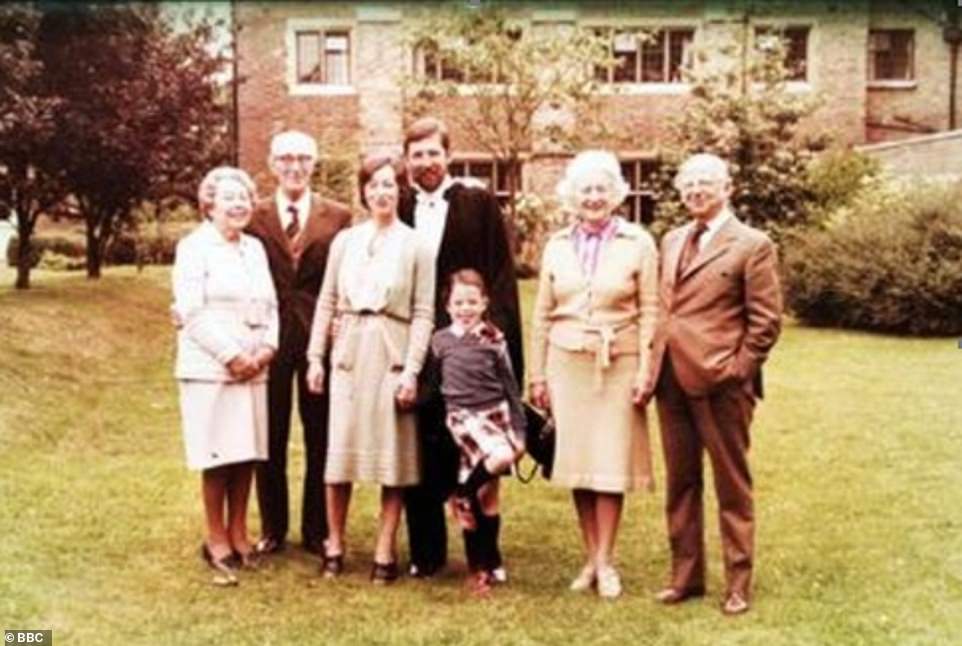 Family photograph: Olivia (centre) is pictured with her father Keith and mother Mary flanked by her grandparents in a childhood photograph 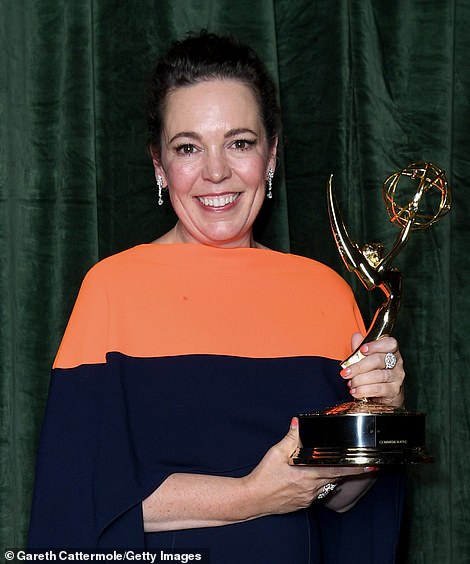 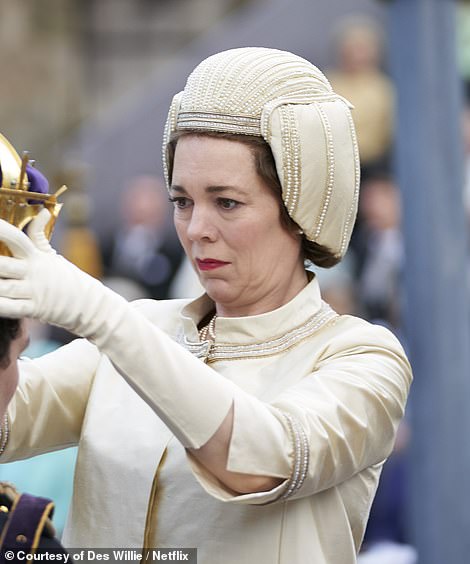 Victorious: Olivia took home the award for Outstanding Lead Actress In A Drama Series for her role as Queen Elizabeth II (pictured right on the Netflix show)

While Olivia won the honor for Outstanding Lead Actress in a Drama Series, Emma had also been nominated for the same award, but looked delighted for her costar as she applauded enthusiastically once Olivia’s name was announced.

Tobias won the honor of Outstanding Supporting Actor In A Drama Series but did not attend the ceremony.

As Tobias, who plays Prince Philip, did not attend the show, presenter Kerry Washington accepted the honor on his behalf. 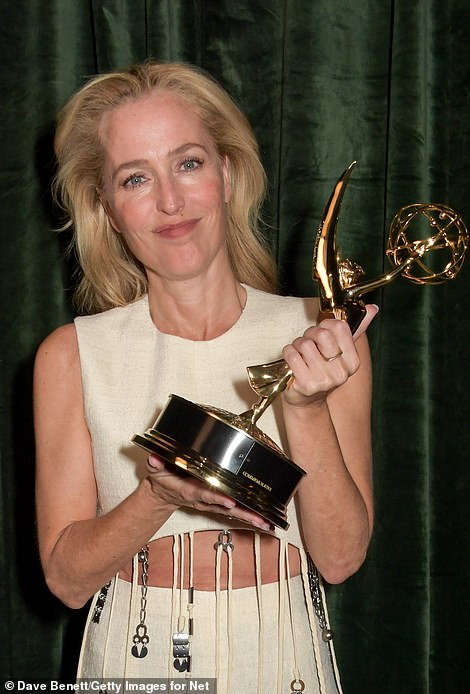 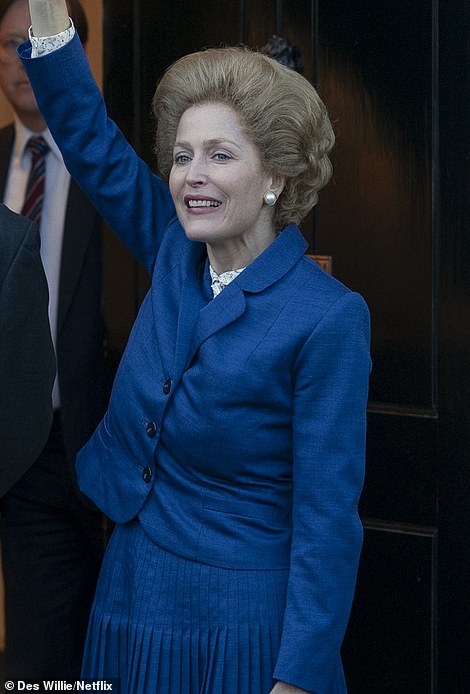 Winner: Gillian took home the award for Outstanding Supporting Actress In A Drama Series for her role as British Prime Minister Margaret Thatcher (pictured right on the Netflix show) 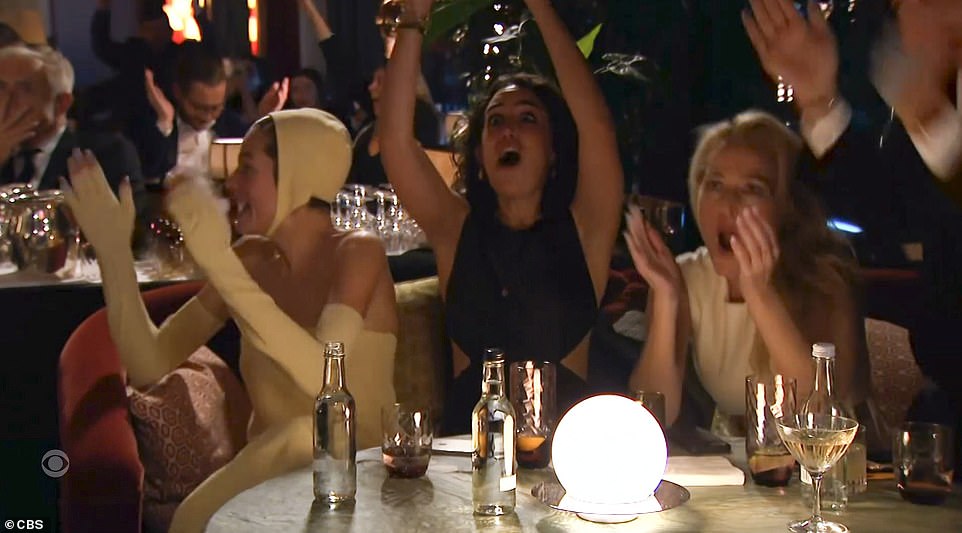 The crowd went wild! The cast cheered at the news their show had won 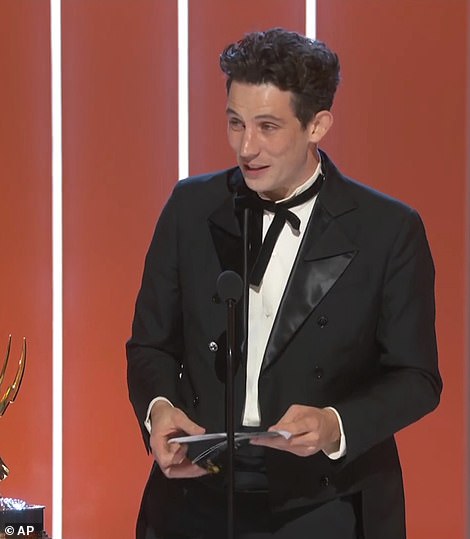 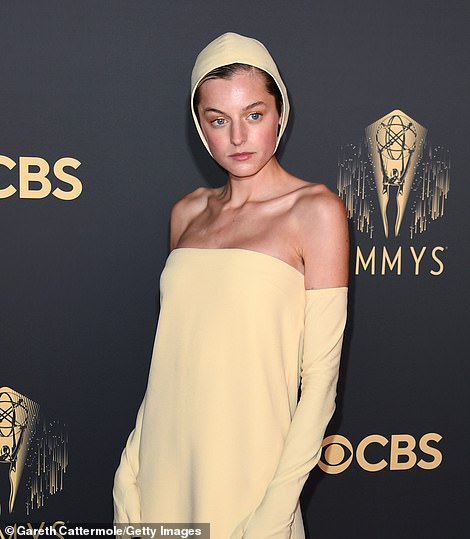 ‘The most rewarding two years of my life’: Josh gushed about his co-star Emma Corrin (right) as well as his girlfriend, and family as he accepted the Emmy 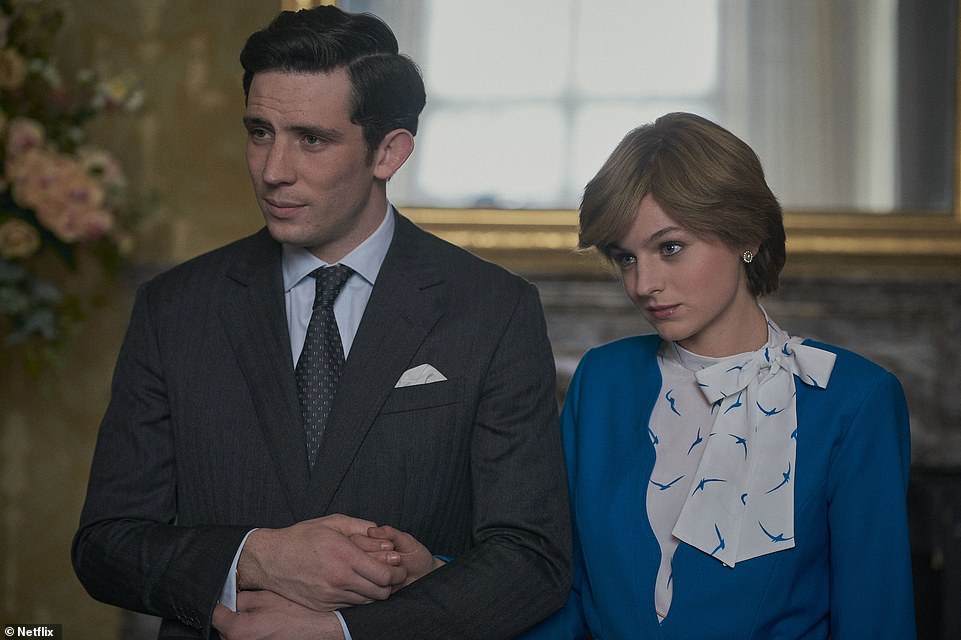 Swept the competition: The Crown beat out The Boys, Bridgerton, The Handmaid’s Tale, Lovecraft Country, The Mandalorian, Pose, and This Is Us for the accolade (pictured Josh and Emma in character as Prince Charles and Princess Diana)

Gillian thanked her ex Peter Morgan, who created The Crown, and her best friend Connie Freidberg. 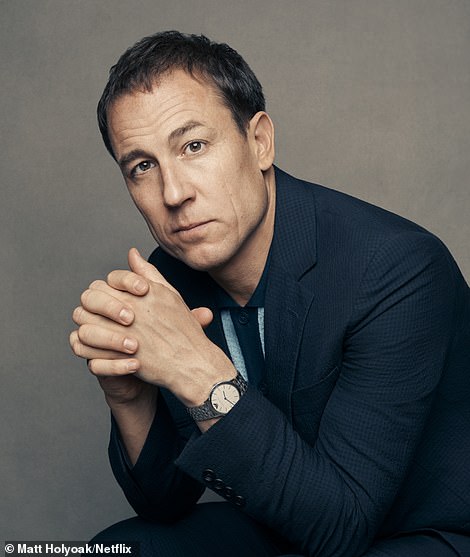 Tobias, who plays Prince Philip, did not attend the show, leaving presenter Kerry Washington to accept the honor on his behalf

‘I want to say thank you to Peter Morgan for creating this role and to Netflix for everything, everything,’ Gillian said.

‘But I really want to dedicate this award to a woman who was my manager for 20 years, Connie Freiberg, who believed in me when no one else would and believed I had talent when I didn’t even think that I had talent.

‘Who always advised me to take the high road; who was one of the best friends that I’ve ever had in my life and who wore the same dress five years running to every award show three times a year that we went to.

Josh described how fulfilling filming the show had been as he thanked his co-star Emma, as well as his girlfriend Margot Hauer-King and family in his speech.

‘Making The Crown has been the most rewarding two years of my life, and the cast and crew, Peter Morgan, our producers and all the brilliant directors who made the show such a pleasure to be a part of, thank you,’ he said.

‘Emma Corrin, you’re a force of nature,’ the actor continued. ‘I love you very much.

He also thanked his ‘beautiful’ girlfriend for ‘putting up with the chaos of this career that I feel incredibly privileged to be a part of.’ 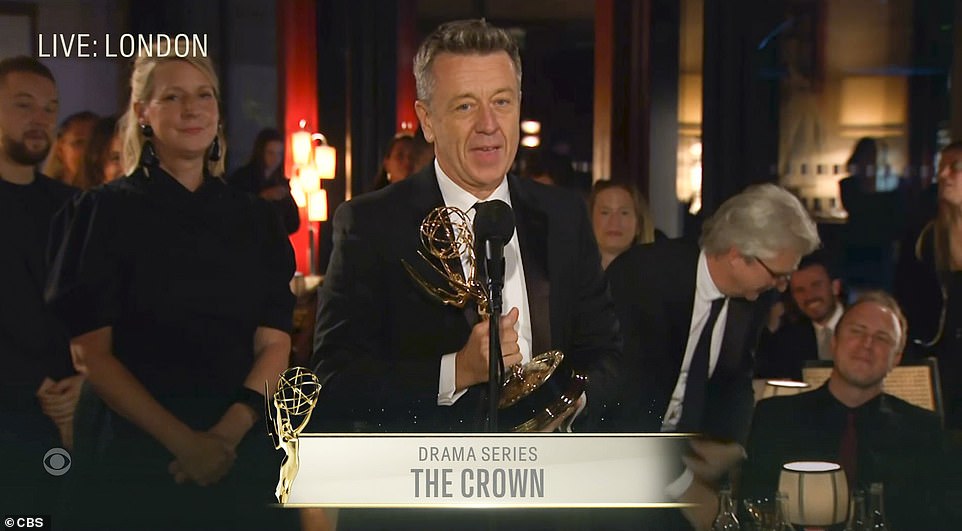 ‘We’re going to have a party now!’ Executive producer Peter Morgan accepted the award for Outstanding Drama Series from London

‘And finally to my grandparents,’ he said. ‘My grandmother who passed a few months ago and my grandfather, Peter O’Connor, who will hopefully watch this in the morning. Your kindness and loyalty has been the greatest gift. Thank you so much.’

Meanwhile, The Crown’s executive producer Peter Morgan said after their Best Drama win: ‘Thank you the Television Academy. Thank you Netflix. Thank you Sony. Thanks, this lot.

‘Thank you to one or two people not here because we start shooting in a couple of hours… We’re going to have a party now! I am lost for words and I’m very, very grateful. Thank you.’ 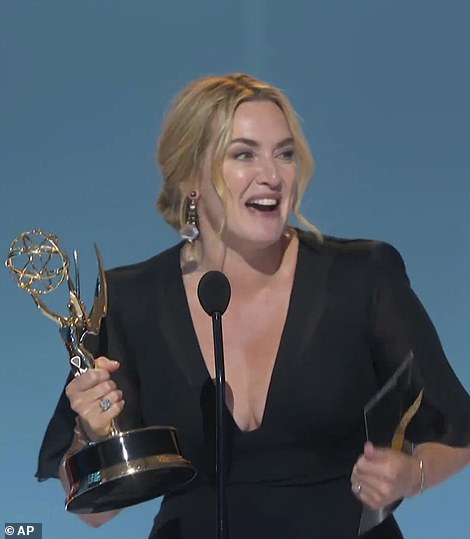 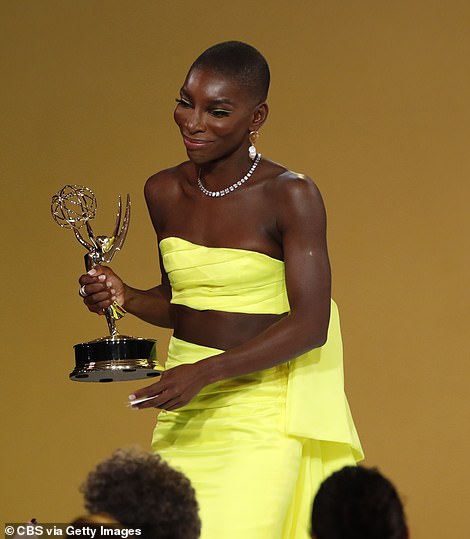 Dressed to impress: Kate and Michaela looked phenomenal in their glamorous gowns as they took to the red carpet at the star-studded event before scooping big wins on the night

Kate received the award for Outstanding Lead Actress In A Limited Or Anthology Series Or Movie for her role in the fan favorite HBO Max show, Mare Of Easttown.

Michaela made history as the first Black woman to receive the Emmy for Outstanding Writing For A Limited Or Anthology Series Or Movie.

Ewan was the winner of Outstanding Lead Actor In A Limited Or Anthology Series Or Movie for his role in Halston. 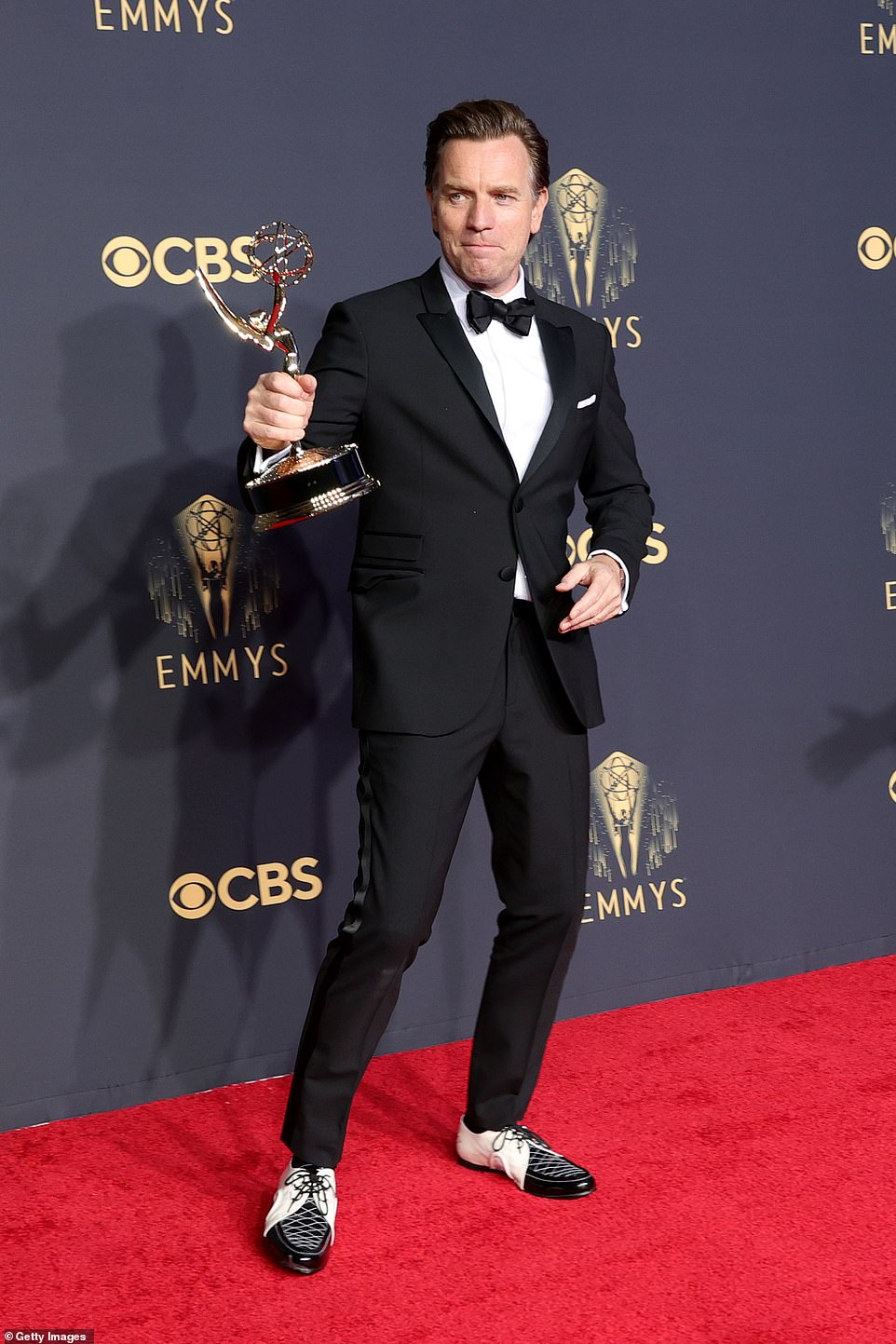 Suits him! Ewan McGregor with his trophy for Outstanding Lead Actor In A Limited Or Anthology Series Or Movie 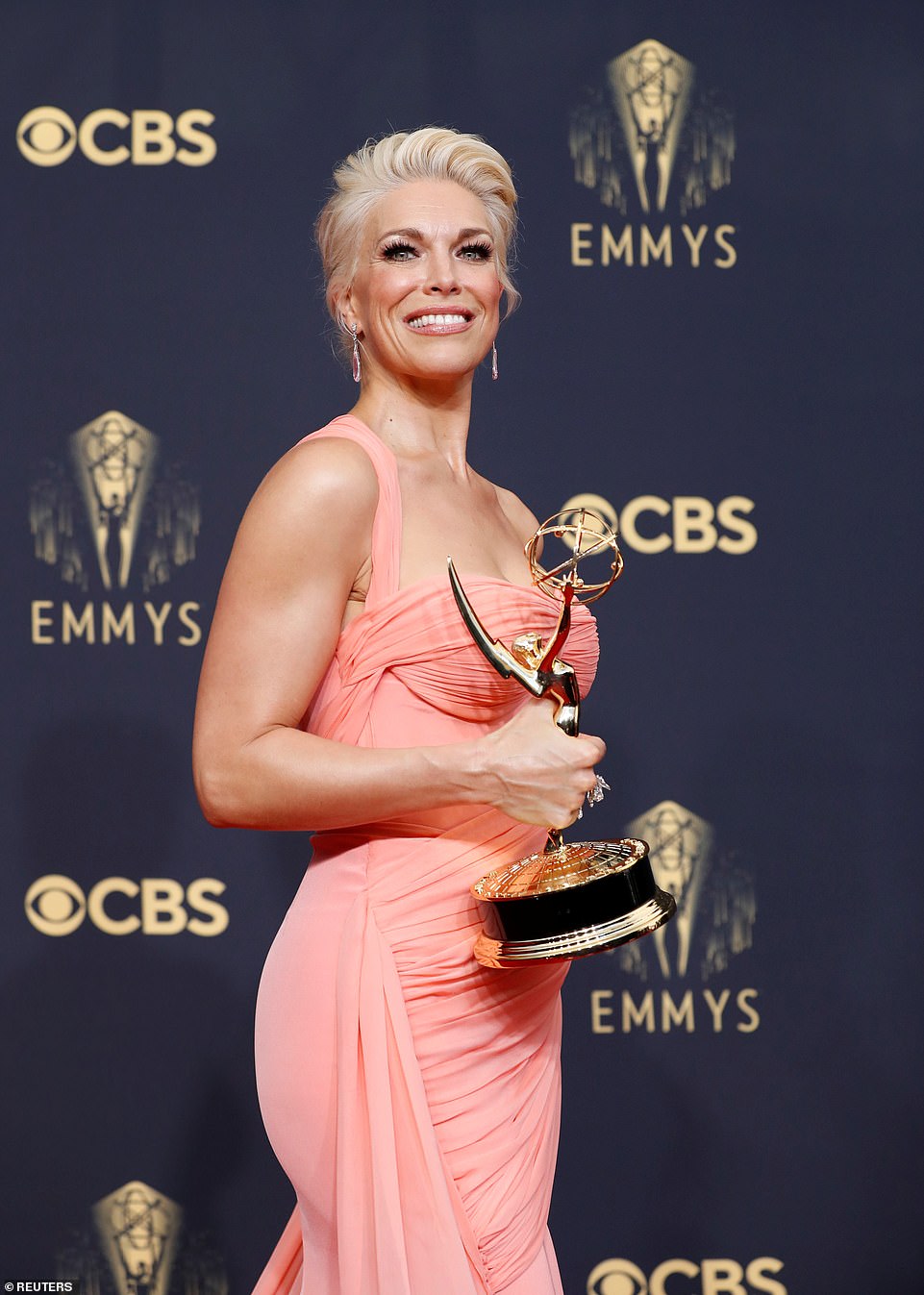 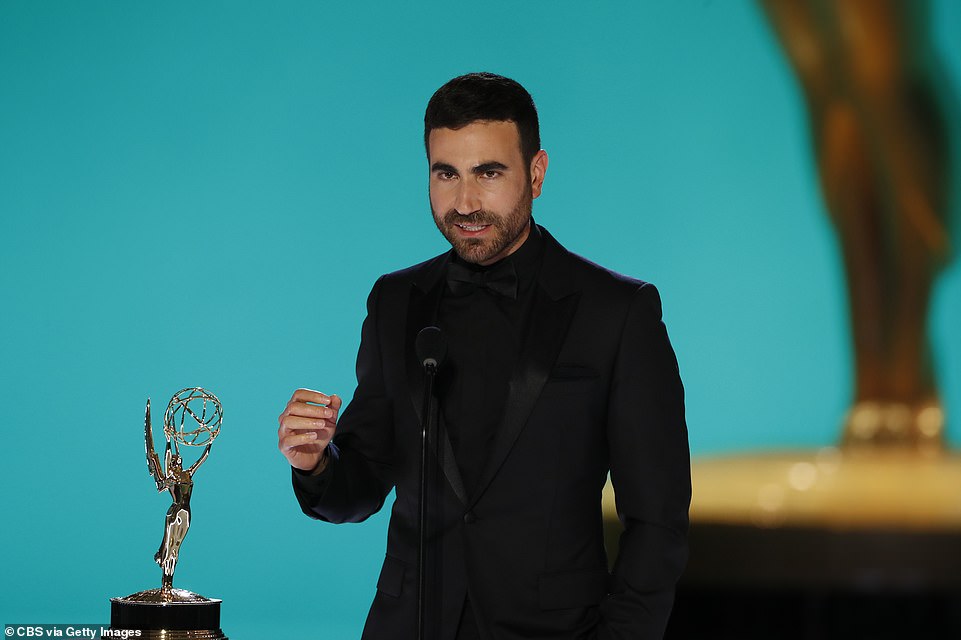 Going for the gold! Brett Goldstein was the winner of Outstanding Supporting Actor in a Comedy Series. 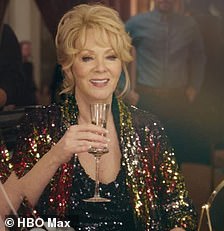 Jean Smart was recognized for Hacks 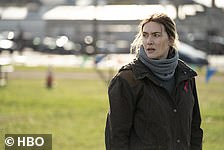 Kate Winslet was recognized for  her work in Mare Of Easttown

Michaela Coel (I May Destroy You)

I May Destroy You (HBO)

Sterling K. Brown (This Is Us)

Supporting Actor in a Drama Series

Chris Sullivan (This Is Us)

Supporting Actress in a Drama Series

Supporting Actor in a Comedy Series

Supporting Actress in a Comedy Series

Supporting Actor in a Limited Series or Movie

Paapa Essiedu (May Destroy You)

Supporting Actress in a Limited Series or Movie

Guest Actor in a Drama Series

Don Cheadle (‘The Falcon and the Winter Soldier’)

Guest Actress in a Drama Series

Phylicia Rashad (‘This Is Us’)

Guest Actor in a Comedy Series

Guest Actress in a Comedy Series

My Next Guest Needs No Introduction with David Letterman (Netflix)

Oprah with Megan and Harry: A CBS Primetime Special (CBS)

Host For a Reality or Competition Program

‘Maggie Simpson In: The Force Awakens From Its Nap’ (Disney)

‘Once Upon a Snowman’ (Disney Plus)