Ariana Grande and Piers Morgan have become embroiled in a Twitter spat after the British TV presenter expressed opinions about women and how they use their sexuality.

The 53-year-old raised eyebrows on Wednesday when he criticised an image from a semi-naked photoshoot of British girl group Little Mix. The photoshoot was intended to champion body positivity, but Morgan claimed they had swiped the concept from American band Dixie Chicks and were "using sex to sell records".

The TV personality also had a dig at Ellen DeGeneres, claiming the "hypocrisy of modern feminism" was laid bare because the comedian had used her show to appreciate men's bodies on International Men's Day.

Grande's mother Joan swiftly took aim at Morgan, tweeting: "Honestly what is wrong with you? Didn't your mother ever teach you, if you have nothing nice to say, don't say it! You came for The Ellen Show yesterday which was disgraceful, she is an angel. Little Mix today. Did you ever hear of paying homage?"

Morgan clapped back, saying his mother always taught him to speak his own mind.

"Ellen's a hypocrite," he wrote on Twitter. "As for Little Mix, I'd just prefer they use their talent to sell records rather than their nudity. As your own daughter does!" 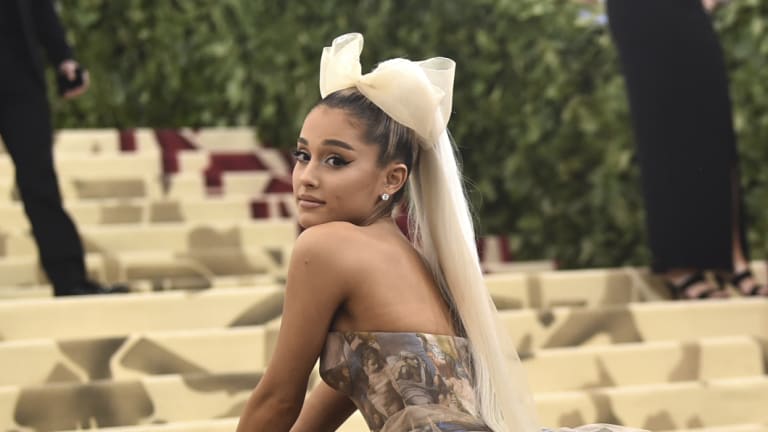 Ariana Grande in May. Credit:AP

Grande, 25, then chimed in, tweeting: "Ellen is an incredible and kind human being. I use my talent and my sexuality all the time because I choose to. Women can be sexual and talented. Naked and dignified. It's our choice.

"We will keep fighting 'til people understand. I say this with all due respect but thank u, next."

The last line of the tweet made reference to Grande's latest single, titled Thank U, Next. It was released earlier this month and name-drops the singer's late ex-boyfriend Mac Miller.

Morgan responded quickly. "Hi Ariana! How lovely to hear from you so soon after your mother. Of course, women can do what they like – but if they/you use nudity to sell records to impressionable young female fans, I'll continue to call them/you out on it. All due respect, but thank YOU. Next."

Grande replied, "I look forward to the day you realise there are other ways to go about making yourself relevant than to criticise young, beautiful, successful women for everything they do. I think that'll be a beautiful thing for you and your career or what's left of it."

Grande also posted a semi-nude image of Morgan advertising Burger King. She wrote: "When u do it it's ok tho right?"

Morgan then invited Grande to go on the show he co-hosts, Good Morning Britain, to "settle this like mano-to-womano".

"We can bring our mothers too, if you like," he added.

But the pop star was having none of it, one again tweeting her "thank u, next" catch-cry. She then shared a still from her latest single's music video, which showed her dressed as a high school cheerleader along with a reference to the 2000 comedy Bring It On.