Tallulah Willis has celebrated eight years of sobriety by poking fun at an early attempt to emulate pop icon Christina Aguilera during her first.

The daughter of Hollywood stars Demi Moore and Bruce Willis embarked on an abstinence based lifestyle in 2014 after struggling with drug and alcohol dependency throughout her formative years.

And Willis, now 27, played her troubled past for laughs as she took to Instagram with a picture of herself in an outfit reminiscent of Aguilera’s provocative Stripped-era fashion statements. 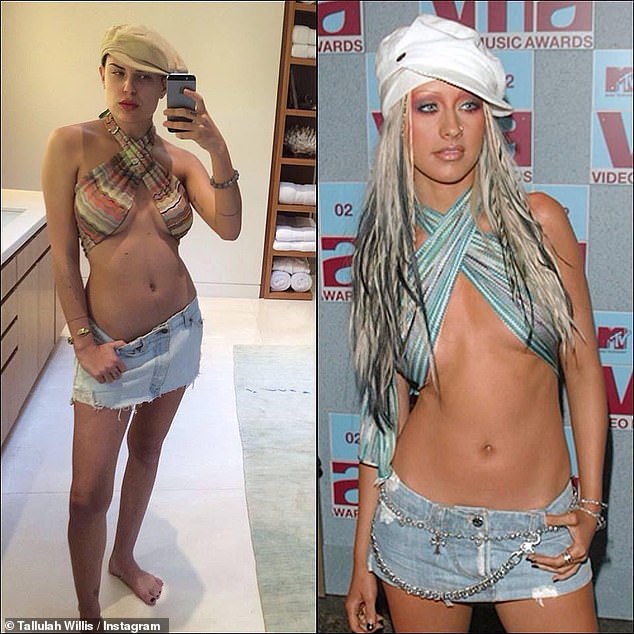 Mirror image: Tallulah Willis has celebrated eight years of sobriety by poking fun at her teenage attempt to emulate pop icon Christina Aguilera during her early years of fame

The photo, taken during her first year of sobriety, captures Willis in a cross-over bandage strap top, thigh-skimming denim skirt and raffish Baker Boy cap as she poses in front of a full-length mirror.

Reinforcing her likeness to Aguilera, she spliced it with a photo of the pop icon in a near identical outfit from the 2002 MTV Music Video Awards, admitting the similarity was ‘hilarious.’

Captioning the image, she wrote: ‘She was a floundering globular primordial ooze without a protective shell, like when you knock over a drink and the liquid helplessly devours the surface; a rebellion of containment ensues as the unhesitating perimeter expands in all directions. 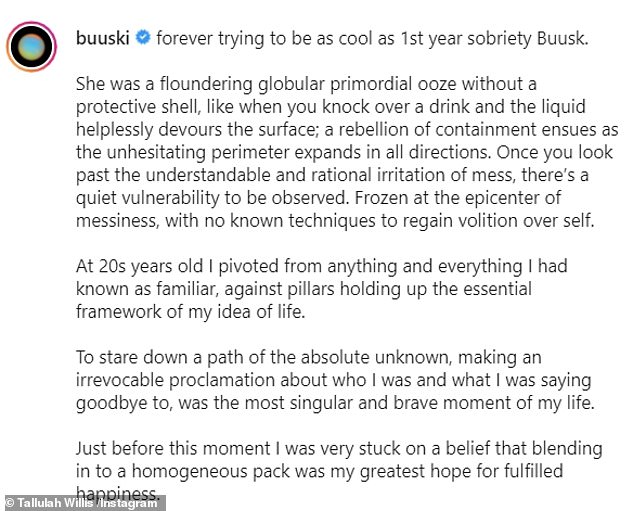 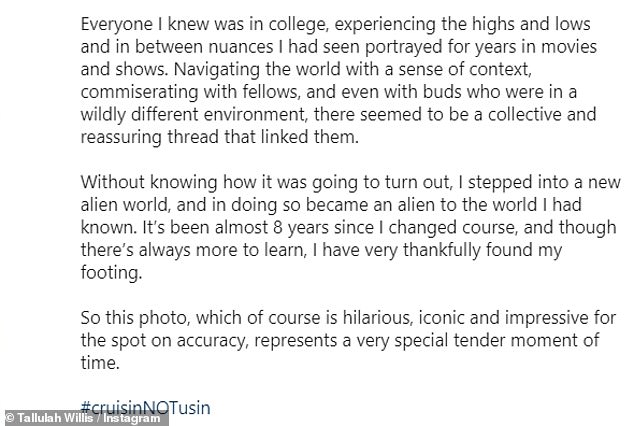 Looking back: Willis captioned the image, taken during her first year of sobriety, with a lengthy message about her early days in recovery 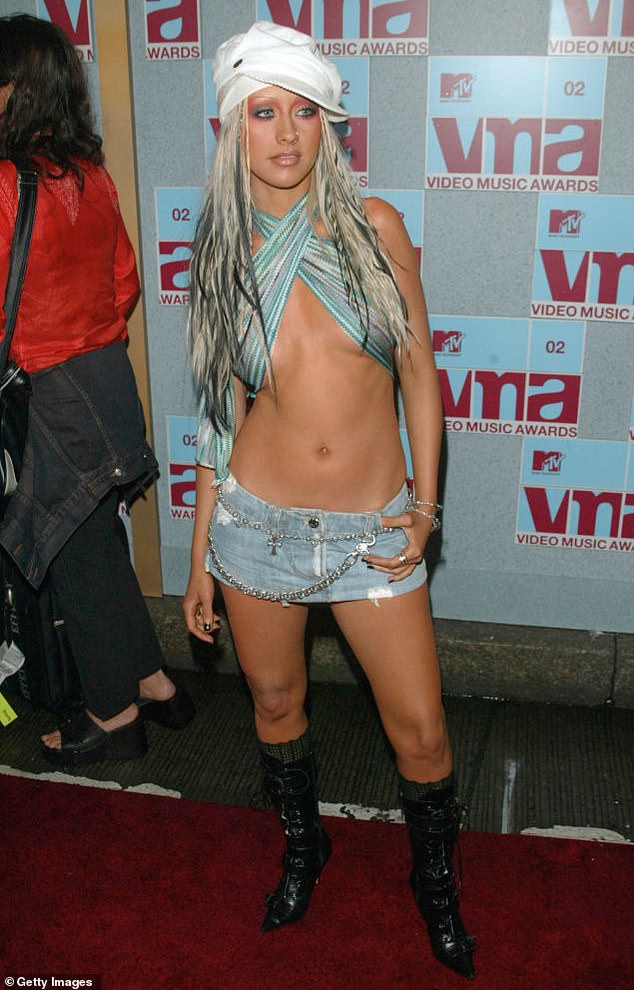 Real deal: Willis used a photo of the pop icon in a near identical outfit from the 2002 MTV Music Video Awards, admitting the similarity was ‘hilarious’

‘Once you look past the understandable and rational irritation of mess, there’s a quiet vulnerability to be observed. Frozen at the epicenter of messiness, with no known techniques to regain volition over self.

‘At 20s years old I pivoted from anything and everything I had known as familiar, against pillars holding up the essential framework of my idea of life.

‘To stare down a path of the absolute unknown, making an irrevocable proclamation about who I was and what I was saying goodbye to, was the most singular and brave moment of my life.’ 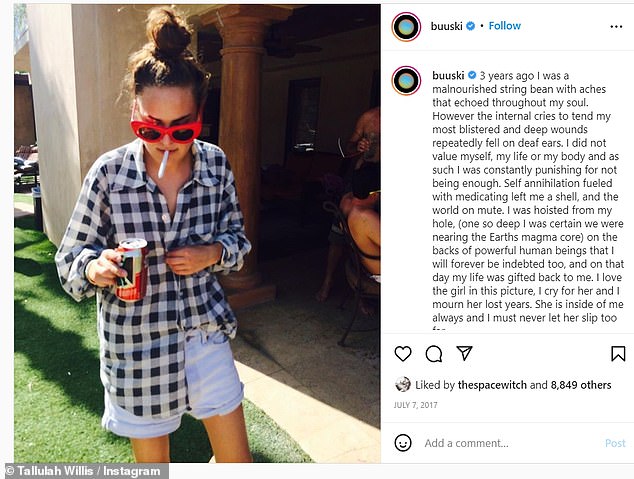 Candid: Willis regularly speaks out about her battle with substance and alcohol abuse while advocating an abstinence based lifestyle

She added: ‘Just before this moment I was very stuck on a belief that blending in to a homogeneous pack was my greatest hope for fulfilled happiness.

‘Everyone I knew was in college, experiencing the highs and lows and in between nuances I had seen portrayed for years in movies and shows. Navigating the world with a sense of context, commiserating with fellows, and even with buds who were in a wildly different environment, there seemed to be a collective and reassuring thread that linked them.

‘Without knowing how it was going to turn out, I stepped into a new alien world, and in doing so became an alien to the world I had known. It’s been almost 8 years since I changed course, and though there’s always more to learn, I have very thankfully found my footing.

‘So this photo, which of course is hilarious, iconic and impressive for the spot on accuracy, represents a very special tender moment of time.’ 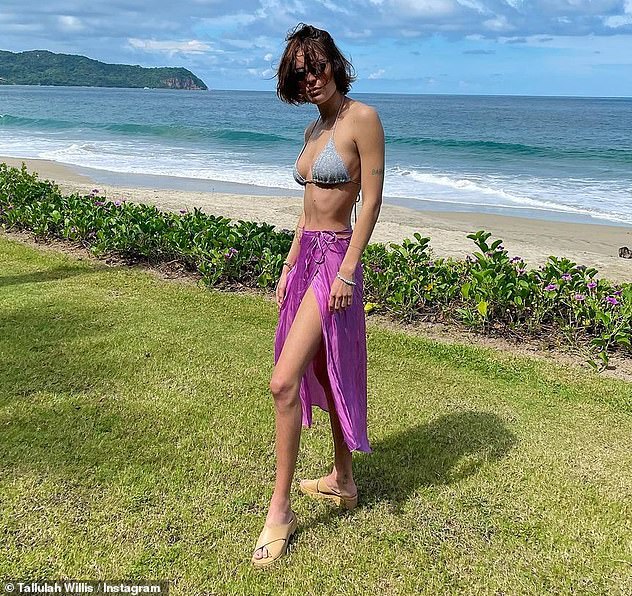 Clean and sober:  The artist admits she’s keen to help those who are facing similar issues

Willis frequently uses her social media platform to reflect on her past struggles while advocating sobriety after entering rehab in 2014, and admits she’s keen to help those who are facing similar issues.

She told Allure: ‘If anything that I went through could help somebody, I have an obligation to speak out. I was just very driven by that.

‘I would get emails from people expressing their gratitude for my honesty and saying that it inspired them. That was very encouraging. This was bigger than me. It wasn’t about drugs or drinking.

‘That was the first step of clearing the top layer to get to the real things you work on. I just had to stop all of that and the real work began.’