TALK OF THE TOWN: BBC’s Naga Munchetty reveals she is a fan of Emily Bronte’s Wuthering Heights because the female lead is ‘hateful’ and ‘cruel’ 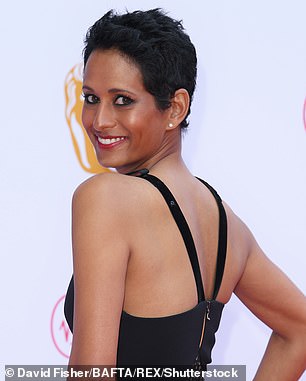 When BBC Breakfast presenter Naga Munchetty told me she adores Wuthering Heights, I assumed she was drawn to its passionate story of intense love… but I couldn’t have been more wrong.

Instead, Naga confessed she was a fan of Emily Bronte’s classic novel because its female star is cruel!

‘It showed me that women do not have to be likeable, that they can be hateful and that love isn’t glorious. I sound so dark by saying that – dark of heart,’ admits Naga, 45.

‘Cathy is a hateful character, she is cruel. And I love her, I absolutely love her. Does that sound really awful?’

Er, not awful, Naga, but a bit scary…

It may not be much larger than a walk-in wardrobe, but millionaire model Cara Delevingne has rented out this tiny studio flat, above, for £1,127 a month.

The new tenant – in one of 11 flats owned by Cara’s family in West London – will have to clamber up a ladder to get to the ‘mezzanine’ bed over the kitchen units.

The 27-year-old, a director of her father Charles’s property firm, earned £21.5million in 2018, and while you don’t have to be as rich as her to rent the flat, you’d probably need to be as bijou as her to fit in it.