Sylvester Stallone made a surprise appearance on Thursday in New York City at a screening of his new film Samaritan.

The 76-year-old actor dressed in a dark navy blue suit over a black button-down top with dark dress shoes at the AMC Empire 25 movie theater, slapping hands with fans as he was applauded in the unexpected cameo.

It was the first time the New York native has been publicly spotted since news broke Wednesday that his wife of 25 years, Jennifer Flavin, had filed for divorce. 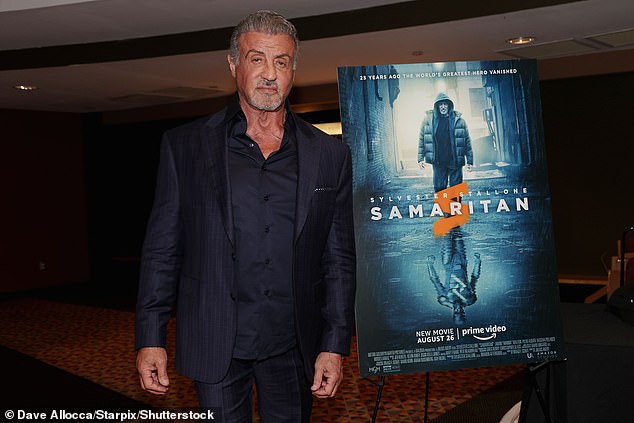 Out and about: Sylvester Stallone made a surprise appearance on Thursday in New York City at the AMC Empire 25 movie theater at a screening of his new film Samaritan

In the court filing, which was filed last week in Palm Beach County, Florida, where the family has a residence, Flavin, 54, asked for the home in Florida, and a larger share of the family assets, as she said in legal docs that the screen star deliberately spent money that should be apart of their estate.

As DailyMail.com previously reported, Stallone was seen earlier this month undergoing a procedure on a tattoo of Flavin’s face that he had on his right side, replacing an image of her with a picture of Butkus, Rocky’s Bullmastiff from the hit movies.

Stallone’s character on his new show Tulsa King is named Dwight and he has featured the canine in a number of social media posts.

Family sources told TMZ that Stallone and Flavin fought over using the dog for protection at their homes, which led to an escalating argument over separate issues that led to Flavin filing for divorce. Stallone told the outlet that the argument over the Rottweiler was not keynote to the end of their relationship. 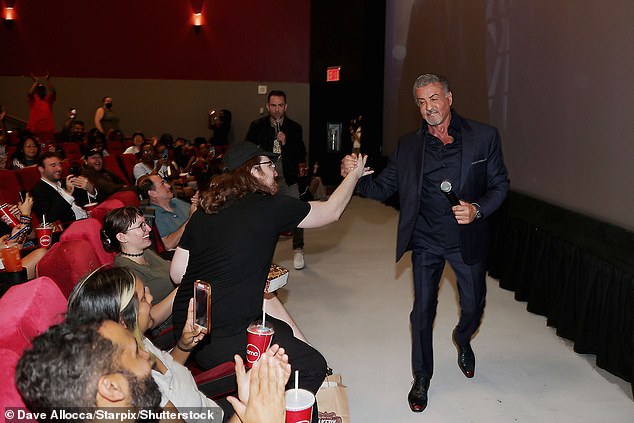 Popular: The Rocky mainstay slapped hands with fans as he was applauded in the unexpected cameo 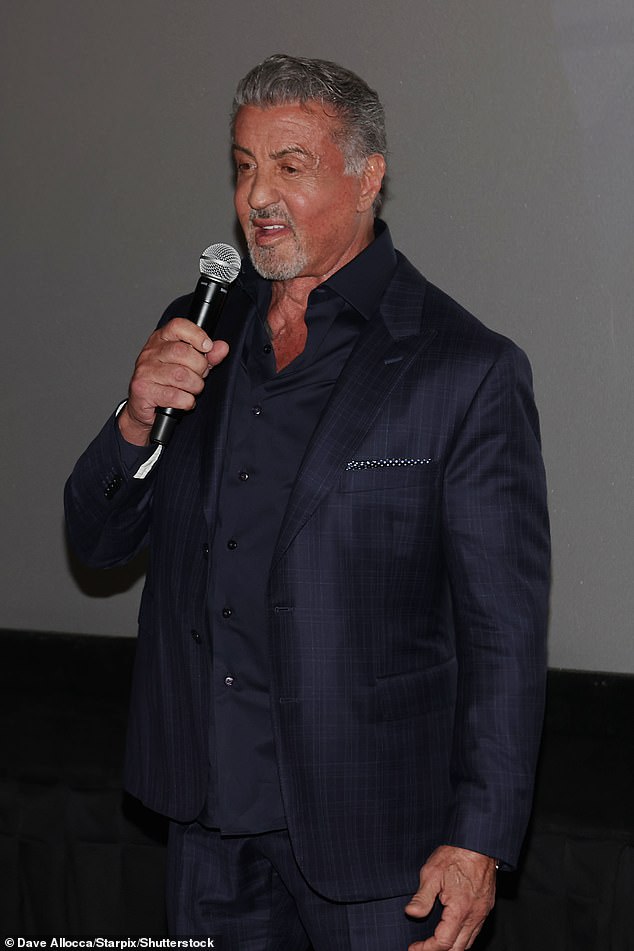 Speaking out: The actor addressed the crowd at the screening in the Big Apple 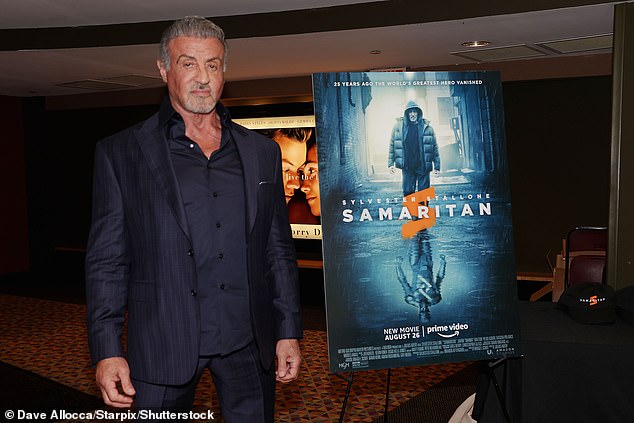 On the promotional trail: Stallone posed next to a poster advertising the film at the venue

Flavin also hinted that it might all be over in an Instagram picture of her hugging their three daughters.

‘These girls are my priority,’ she wrote on the post August 10. ‘Nothing else matters. The 4 of us forever.’

Jennifer is no longer following her husband on Instagram.

Flavin filed for divorce on Friday in Palm Beach County, Florida, Closer Weekly first reported, and is claiming that Stallone has hidden their marital assets.

According to divorce documents obtained by DailyMail.com, she claims Stallone ‘has engaged in the intentional dissipation, depletion and/or waste of marital assets which has had an adverse economic impact on the marital estate.

‘Moreover, the Husband should be enjoined from, selling, transferring, assigning, encumbering, or dissipating any assets during the pendency of proceedings.’

Jennifer, who took her husband’s last name, is also seeking to restore her maiden name, Flavin.

‘I love my family. We are amicably and privately addressing these personal issues,’ Sly told DailyMail.com in a statement via his publicist. 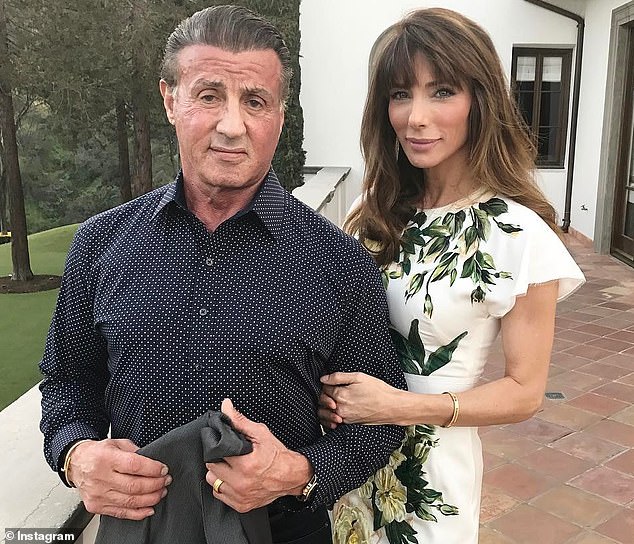 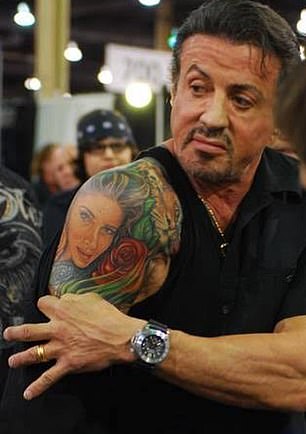 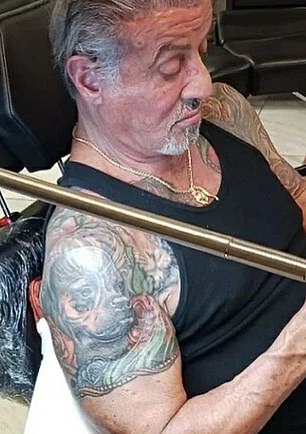 BEFORE AND AFTER: Stallone had a huge tattoo of Flavin’s face on his right bicep which was covered up with a photo of his dog Butkus 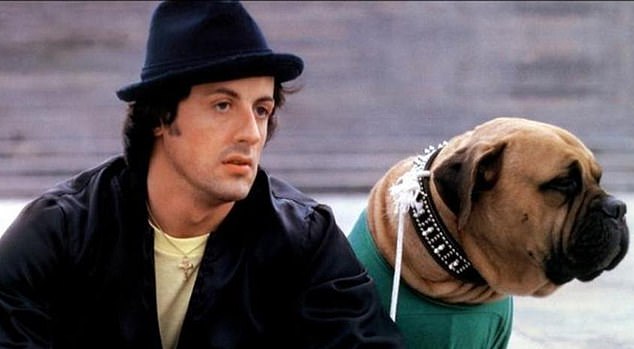 Butkus appeared alongside Rocky Balboa in the original Rocky and again in Rocky II; the bull mastiff was owned by Sylvester Stallone in real life 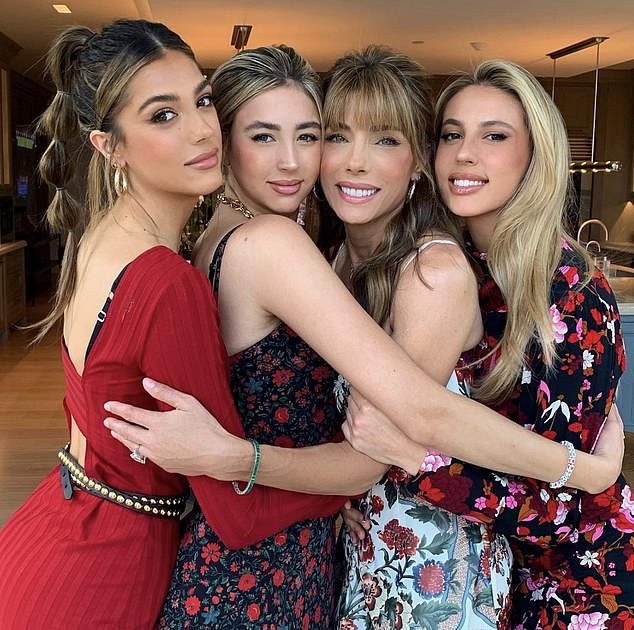 Flavin hinted that it might all be over in an Instagram picture of her hugging their three daughters on August 10. ‘These girls are my priority,’ she wrote on the post. ‘Nothing else matters. The 4 of us forever’

Flavin said in divorce docs, ‘The marriage between the parties is irretrievably broken.’

Earlier this week, Stallone’s publicist insisted that all is well and Sly had wanted to update the tattoo – but it went wrong and was ‘unfixable’.

‘Mr. Stallone intended to refresh the tattoo image of his wife Jennifer however the results were unsatisfactory and, unfortunately, unfixable,’ she said.

‘As a result, he had to cover the original image with a tattoo of his dog from Rocky, Butkus.

‘Mr. Stallone loves his family. The Stallones are presently filming a reality show together which will debut on Paramount+,’ Bega added.

Stallone was showing off the tattoo of his wife as recently as August 7 with a photo on his Instagram page. But just nine days later on August 16 tattoo artist Zach Perez posted himself working on Stallone’s upper arm.

And his pictures showed the Flavin ink has gone and in its place is a picture of a little puppy.

Perez posted a picture of his artwork too, but took it down when commenters started asking why the star had covered up his wife’s picture.

Stallone’s third marriage had appeared to be one of the strongest in Hollywood until now, even though the couple’s romance had a rocky start. They first dated in 1988 shortly after his brief second marriage to Brigitte Nielsen had gone south. 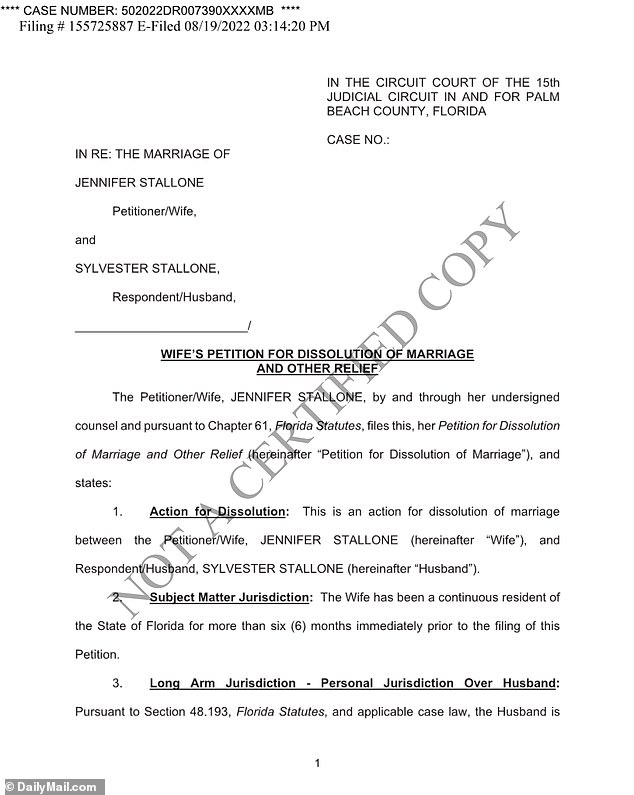 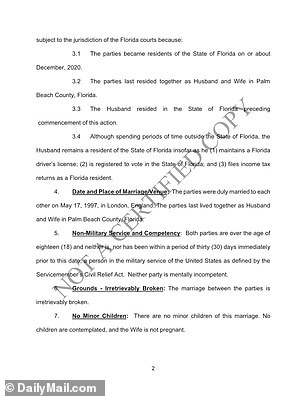 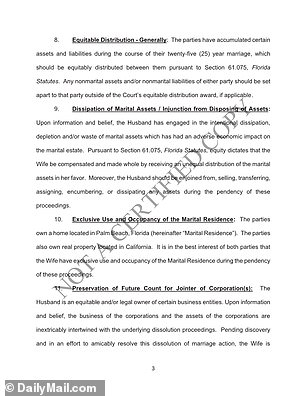 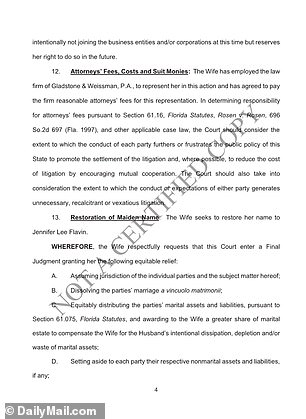 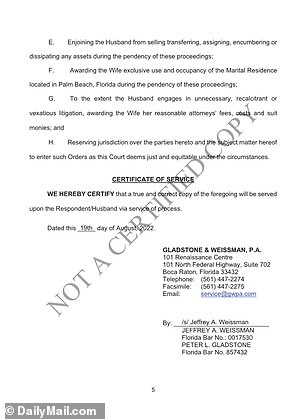 According to divorce documents obtained by DailyMail.com, she says Stallone ‘has engaged in the intentional dissipation, depletion and/or waste of marital assets which has had an adverse economic impact on the marital estate’ 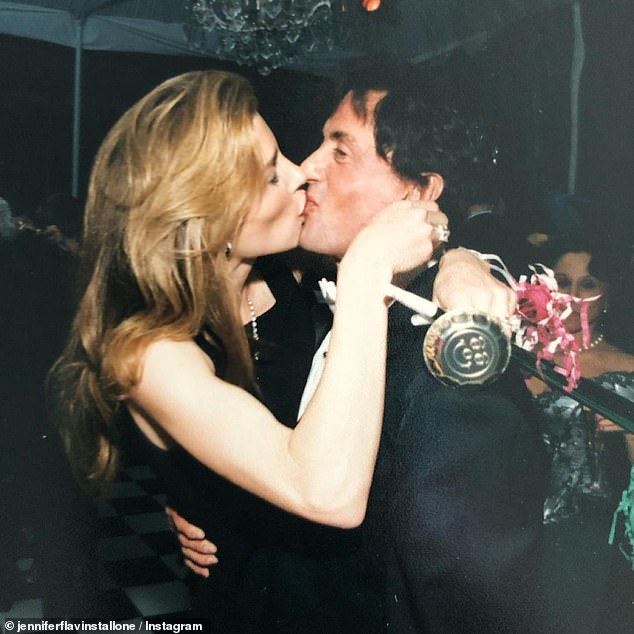 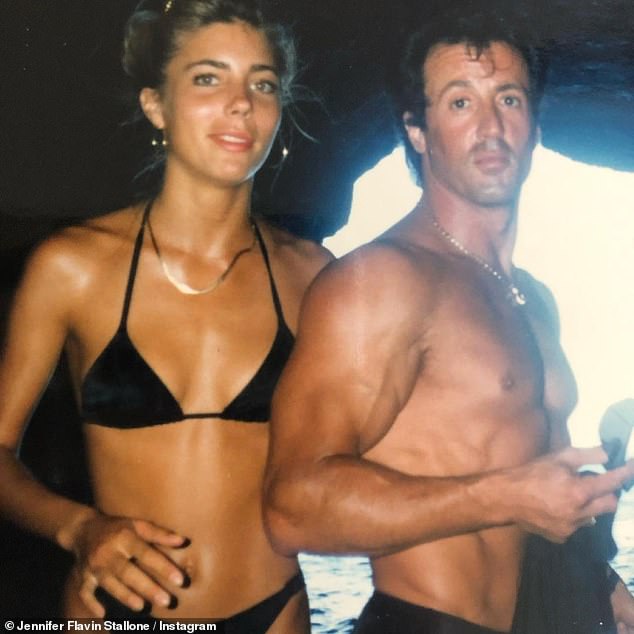 This is Stallone’s third marriage, which had appeared to be one of the strongest in Hollywood until now 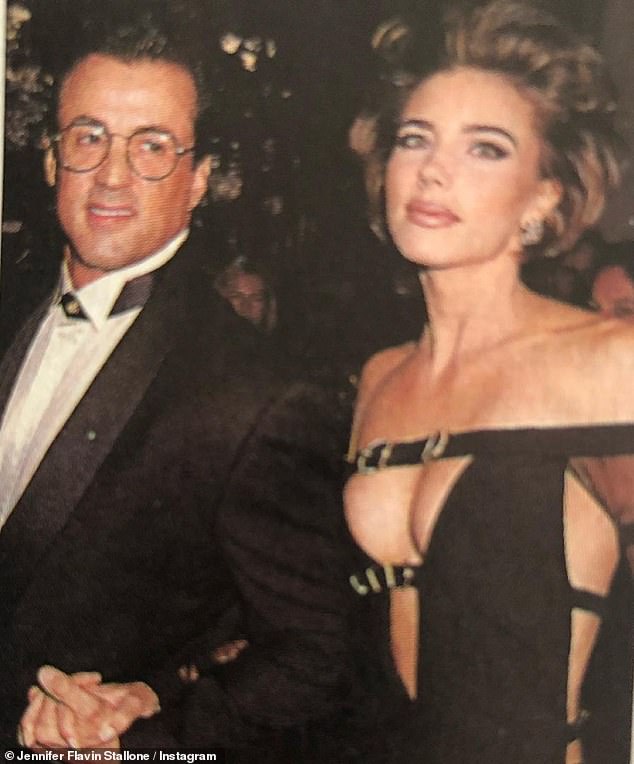 The couple married on May 17, 1997 at the posh Dorchester Hotel in London

They had met in a Beverly Hills restaurant when she was a 20-year-old model and he was suffering a temporary glitch with Rambo III – a movie that won him the Golden Raspberry for worst actor.

But he then moved on to model Janice Dickinson who said he was the father of her little girl. He ended things with Flavin by sending her a letter by FedEx, which she called ‘sloppy.’

It was only after he and Dickinson split that DNA tests proved he was not the dad.

He then got engaged to actress Angie Everhart but that fizzled and he again returned to Flavin.

They married on May 17, 1997 at the posh Dorchester Hotel in London, and with Stallone’s reputation as a playboy, few predicted they would last long.

‘Still, he’s not a cheating dog every day of the week,’ she added. ‘We spend five out of seven nights together, so I don’t know where he’d find the time.’

But last it did and just this May they celebrated their silver wedding anniversary. The marriage produced three daughters, Sophia, now 25, Sistine, 24, and Scarlet, 20.

He had two sons with first wife Sasha Czack, Sage, who died of coronary artery disease in 2012 aged 36, and Seargeoh, 43. 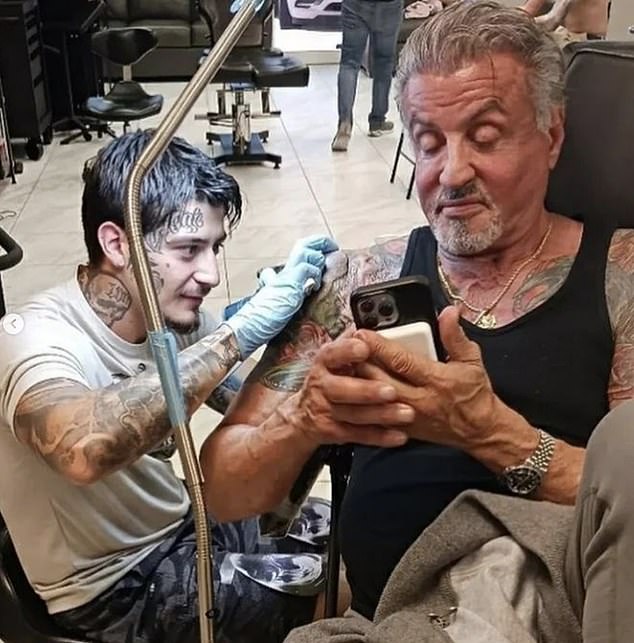 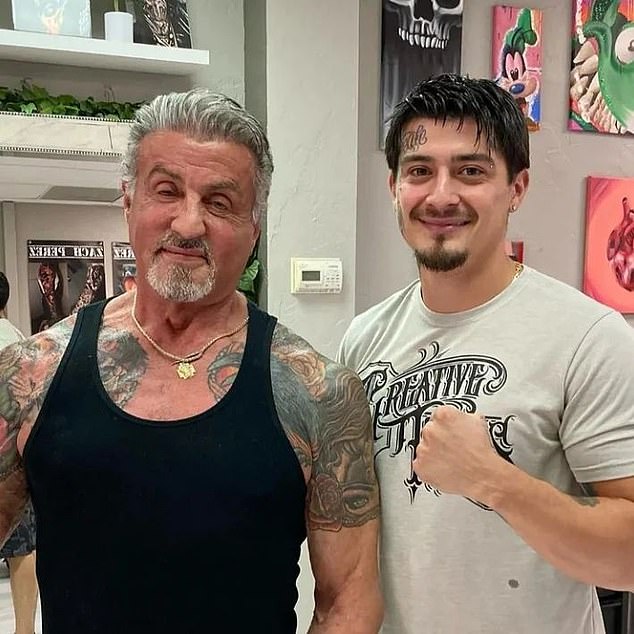 Stallone has often joked about the lack of testosterone as he has spent the years surrounded by the women in his life. Having three daughters, he said ‘is a free passport to hell,’ during a 2010 interview.

‘Everything in the house is female,’ he added. ‘The toys, the housekeeper, all the dogs, he said in a 2010 interview. ‘The one dog I have that’s male is neutered… I’m next.’

But he credited Jennifer with learning to have fun.

‘It took me 19 years to realize she’s always right. I realized that women have a knack, at least Jennifer, for making incredibly erudite, wise, smart decisions. I always leap without looking. She always looks and never leaps.

‘She’s incredibly safe. So now finally, I say: ‘Honey, you make all the decisions. Done, done, done. I trust you.’ I never had that before. Ever.’ Things weren’t always so sane. 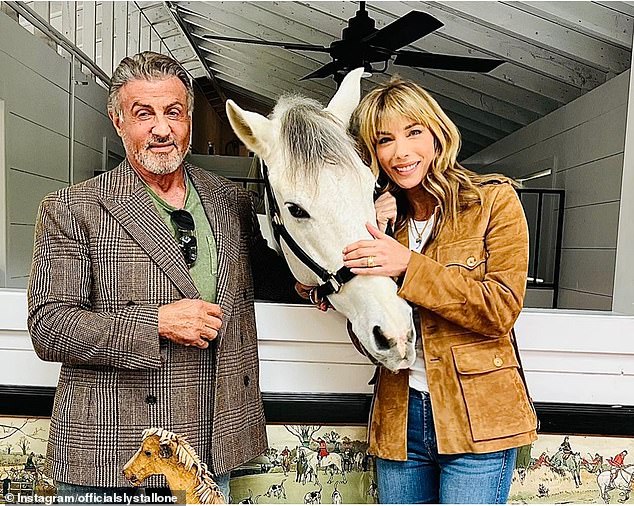 In May, on the couple’s anniversary, Stallone posted: ‘Happy 25th anniversary to my amazing wife. There is not enough words to describe what this incredibly selfless dedicated, patient, woman has meant to our lives and I only wish they (sic) could be another 25!’ 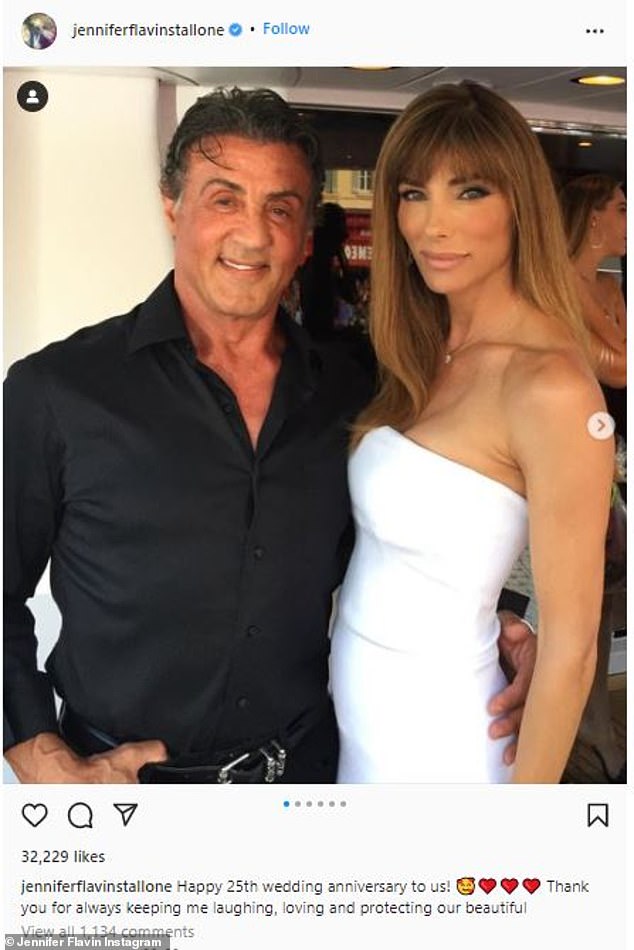 This year on their anniversary in May she posted: ‘Thank you for always keeping me laughing, loving and protecting our beautiful family!’ 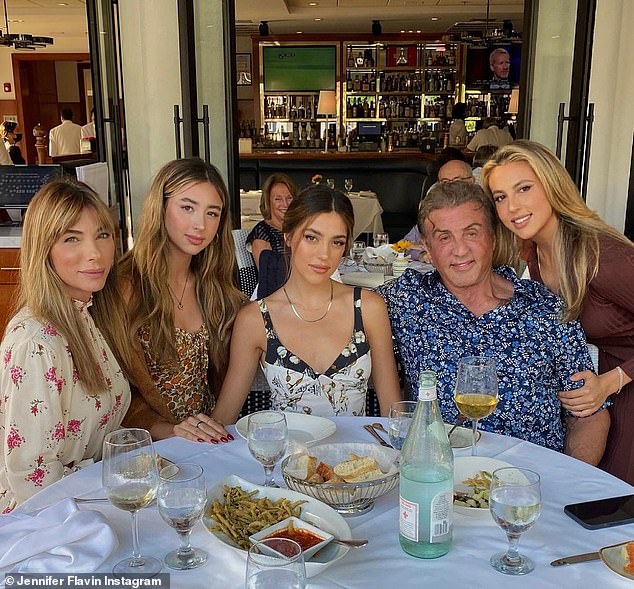 Jennifer is no longer following her husband on Instagram. The family is pictured

‘There is not enough words to describe what this incredibly selfless dedicated, patient, woman has meant to our lives and I only wish they (sic) could be another 25!

She responded with a post of her own. ‘Thank you for always keeping me laughing, loving and protecting our beautiful family!’

‘Our marriage keeps getting better every year! I can’t wait to spend the rest of our lives together!’

The anniversary Instas became a tradition in the Stallone household. Last year for their 24th, he posted ”It’s happy Wedding Anniversary Time again! Time is flying but I have a blessed life Thanks to my wife and Family,’