Sylvester Stallone, 75, looks dapper in a suit and bow tie as he cosies up to wife Jennifer Flavin, 53, at the Ruth Bader Ginsburg Woman of Leadership Awards in Washington DC

And Sylvester Stallone and his wife Jennifer Flavin were among the high-profile guests in attendance on Friday night.

The prestigious award ‘honors brave, strong and resilient women who have dedicated their lives to the betterment of society, regardless of background, place and purpose.’

It was established by Justice Ginsburg before her passing in September 2020 with Julie Opperman, the Chairman of the Dwight D. Opperman Foundation. 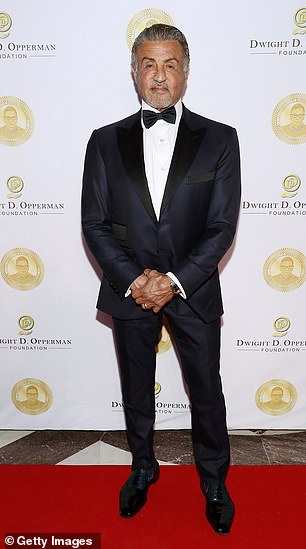 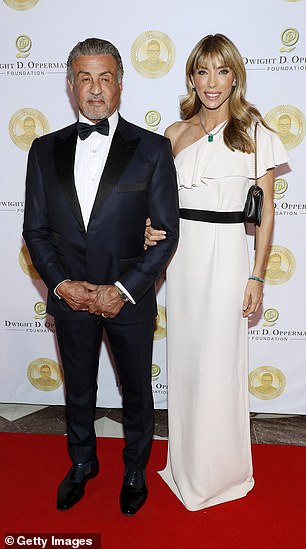 Stallone, 75, hit the red carpet in a classic black tuxedo and bow tie. He completed the dapper look with a pair of dress shoes.

The Rocky star shared the spotlight of the red carpet with his wife of nearly 25 years, who looked lovely in a one-shoulder gown.

The design was cinched-in along the waist with a black belt, as she carried a matching purse.

Making it a family affair, Stallone’s 25-year-old daughter Sophia Stallone was also there to support Diane. The father-daughter duo posed for a snap with Grant Sholem in side the event. 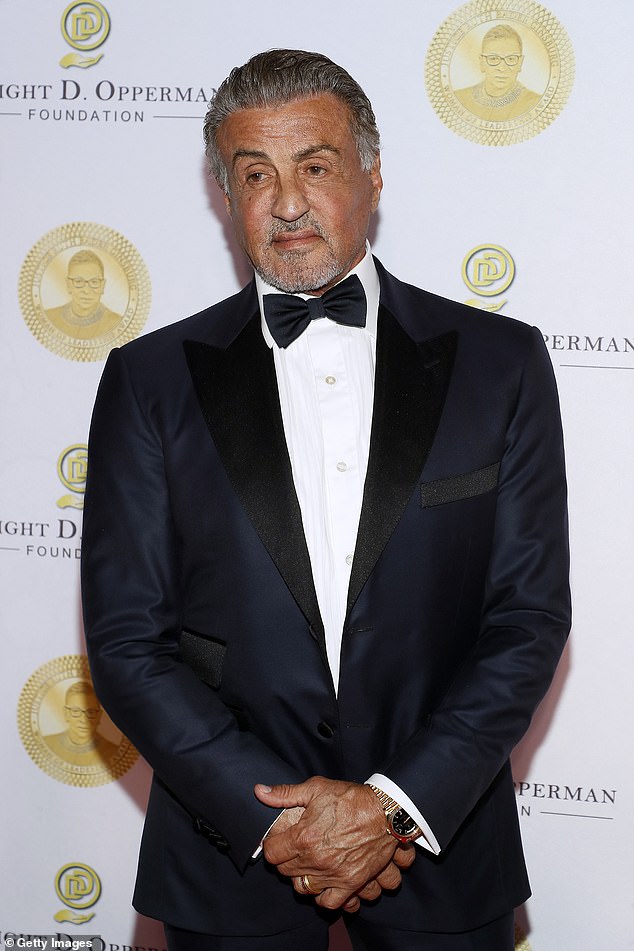 Classic look: With photographers lined up, Stallone, 75, hit the red carpet in a classic black tuxedo and bow tie combination, which included a pair of matching dress shoes. 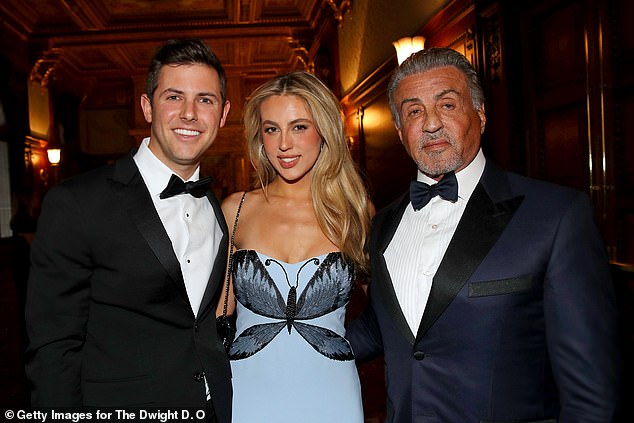 During the ceremony, Stallone was called to the stage. He brought along a pair of red boxing gloves which he hung on a framed portrait of Ginsburg.

Best known for her wrap dress, von Furstenberg, a Belgian fashion designer initially rose to prominence in 1969 when she married into the princely German House of Fürstenberg.

They would separate in 1972 and complete their divorce in 1983, but the Belgian fashion designer and philanthropist continued to use his family name.

‘Ruth Bader Ginsburg represents everything I admire,’ von Furstenberg, 75, said of the honor, adding, ‘She was the embodiment of justice, strength, and character. To get an award in her name is a great honor.’ 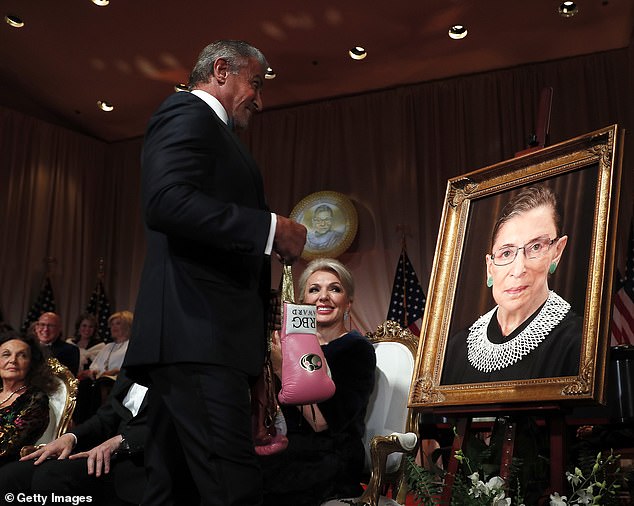 Rocky: During the ceremony, Stallone was called to the stage. He brought along a pair of red boxing gloves which he hung on a framed portrait of Ginsburg 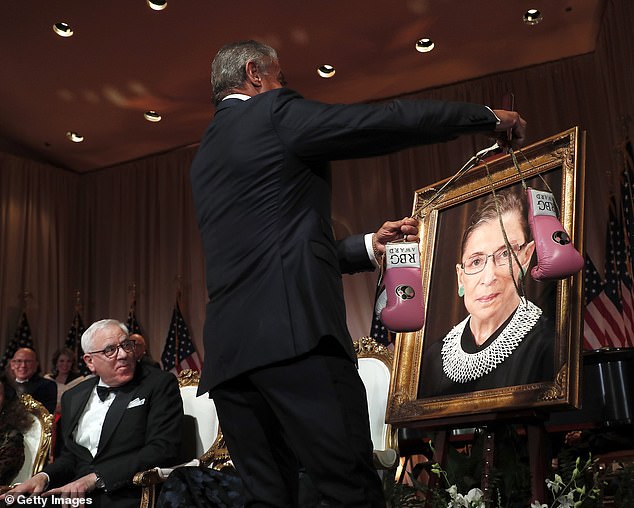 Handle with care: The Rocky screenwriter and stars secured the boxing gloves along the frame 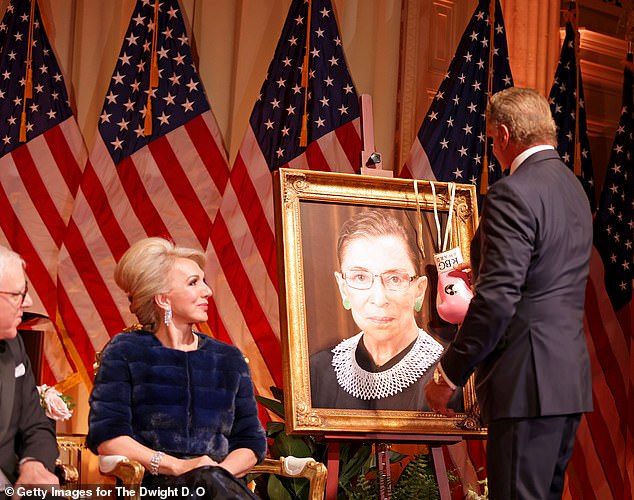 Nominated: Presided Bill Clinton nominated Gisburg, who ended up serving as an associate justice of the Supreme Court Of the United Statesfrom from 1993 until her death in 2020

Opperman, offered high praise about this year’s recipient of the award, sharing how she had ‘admired Diane von Furstenberg my entire adult life.’

During the festivities Stallone met up and chatted with Lynda Carter, 70, the actress who played Diana Prince/Wonder Woman in the series that aired back in 1975

‘However, what I have learned about her as a result of our selection process, I now respect von Furstenberg beyond what words can express. She serves as an inspiration to all who know her, and to all who will learn about her for generations to come.’ 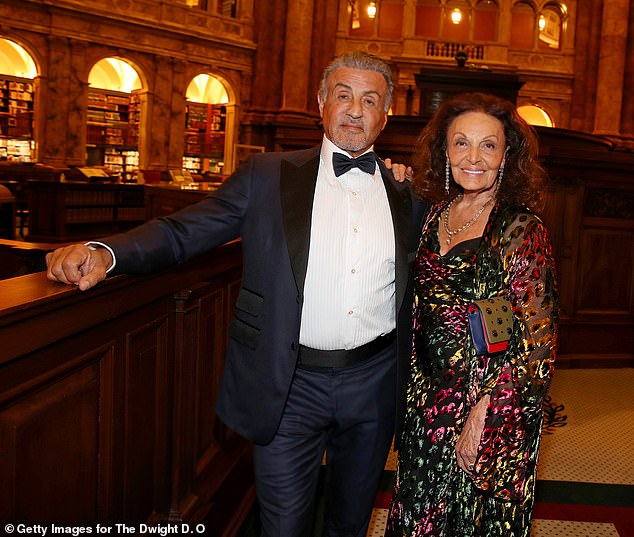 Supportive: Stallone chatted with von Furstenberg at the ceremony 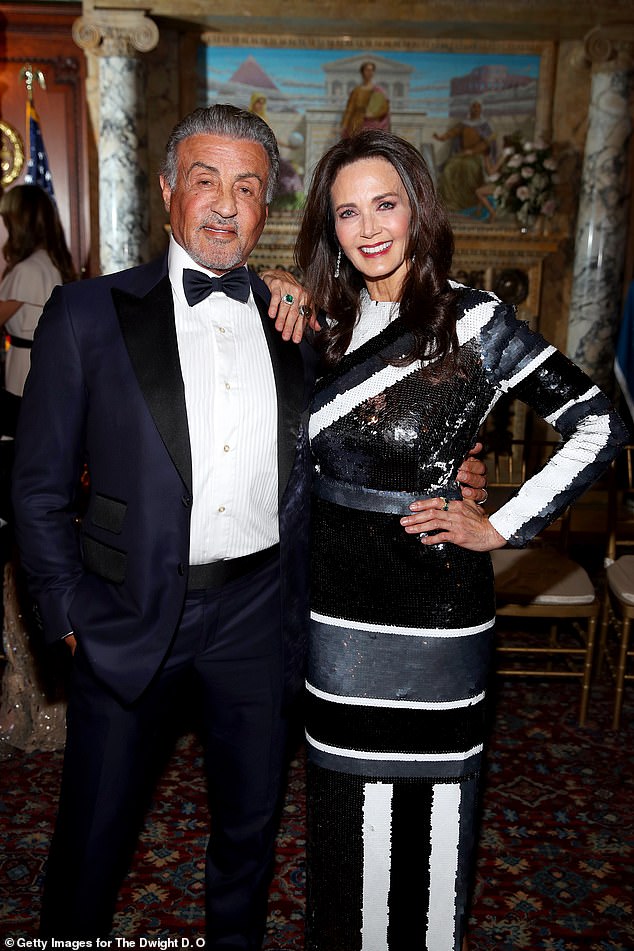 Icons: Stallone also stopped to take a photo with actress Lynda Carter, 70, who is best known for playing Wonder Woman in the 1970s series