All My Children vet Susan Lucci, 75, reveals she had an emergency heart procedure for the SECOND time after suffering shortness of breath and pain in her ribcage: ‘Give yourself permission to take good care of yourself’

Susan Lucci, known for her long-running role as Erica Kane on ABC’s All My Children, revealed she underwent a second emergency heart procedure.

During an interview with Good Morning America on Monday, the 75-year-old soap opera legend spoke to Amy Robach about her battle with heart disease.

‘I was having kind of a shortness of breath,’ the Emmy-winning actress said of the symptoms that prompted her to get help, like discomfort around her ribcage and her back. 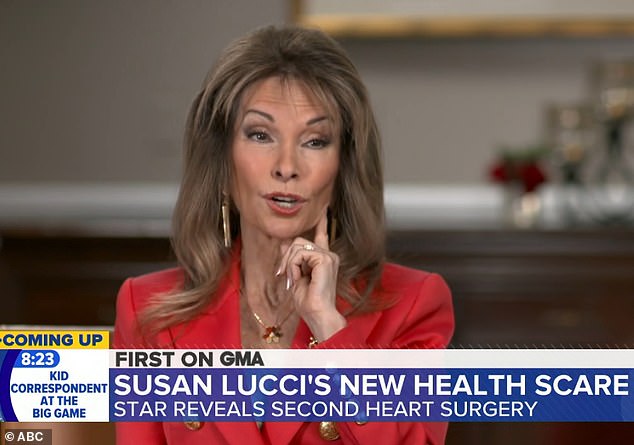 Scary: Susan Lucci, known for her role as Erica Kane on ABC’s All My Children, revealed she underwent am emergency heart procedure

She said her next thought was: ‘This is crazy. These are the same kind of symptoms that I had three years ago but it can’t be.

‘But when I lay down, I started to feel a sharp coming-and-going pain in my jaw,’ the mom-of-two noted, before saying her husband, Helmut Huber, told her to call her doctor.

Further testing revealed Lucci had 80% blockage in one of her arteries due to plaque buildup, which would require stent placement surgery. 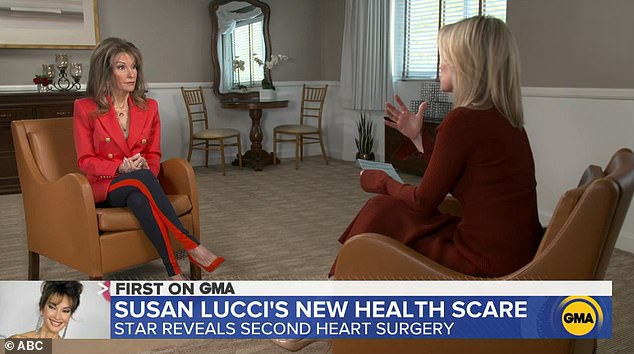 Raising awareness: During an interview with Good Morning America on Monday, the 75-year-old soap opera legend spoke about her battle with heart disease to Amy Robach 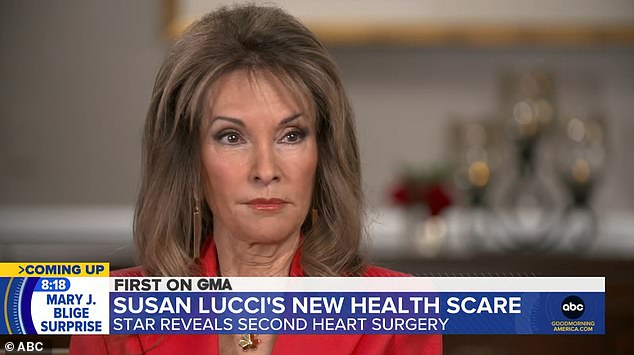 ‘I was having kind of a shortness of breath,’ the Emmy-winning actress said of the symptoms that prompted her to get help, like discomfort around her ribcage and her back

‘She wasn’t having a heart attack this time and she wasn’t unstable,’ Lucci’s doctor, Dr. Richard Shlofmitz, told the network.

‘But she had symptoms that were certainly concerning to me that something might be wrong.’

Shlofmitz praised the best-selling author for not dragging her feet to get a professional opinion as waiting could have turned into a ‘major emergency.’

‘Listen to your heart and act on [the symptoms],’ Lucci urged viewers. ‘Give yourself permission to take good care of yourself. Be your own best friend. Be your own advocate. You’ll save your life.’ 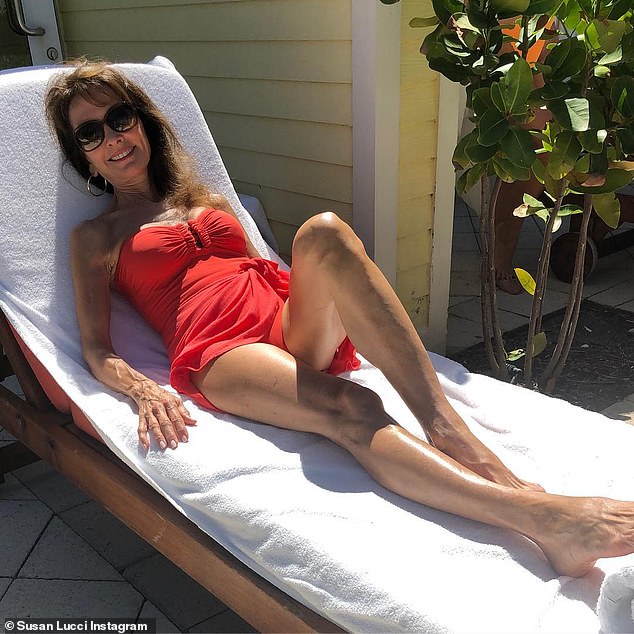 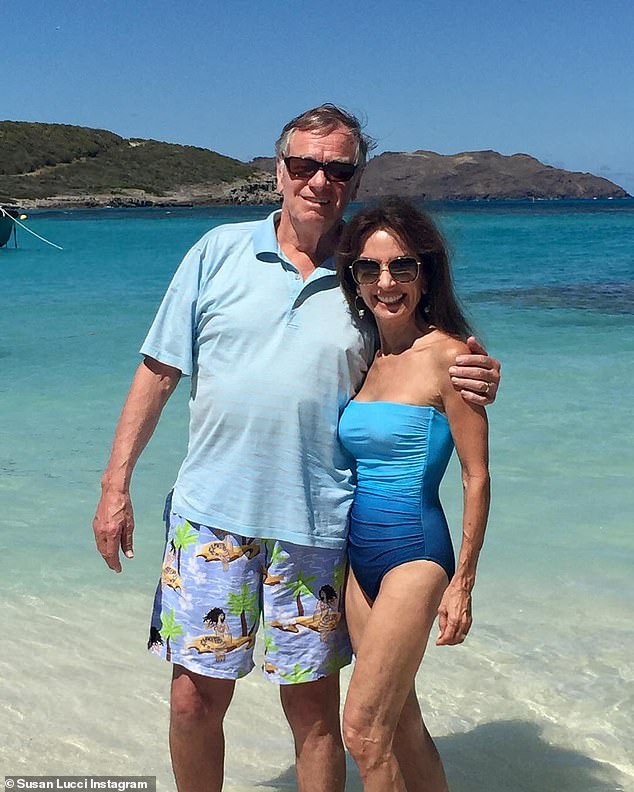 Love of her life: Lucci has been happily married to husband Helmut Huber since 1969; pictured together in December

Four years ago, she suffered a near fatal heart attack also known as ‘The Widowmaker’ after initially ignoring feelings of chest tightness.

Back around Halloween 2018, Lucci began suffering from severe chest pains, which led her to consult with a physician.

‘It felt like an elephant pressing down on my chest,’ she told People at the time. 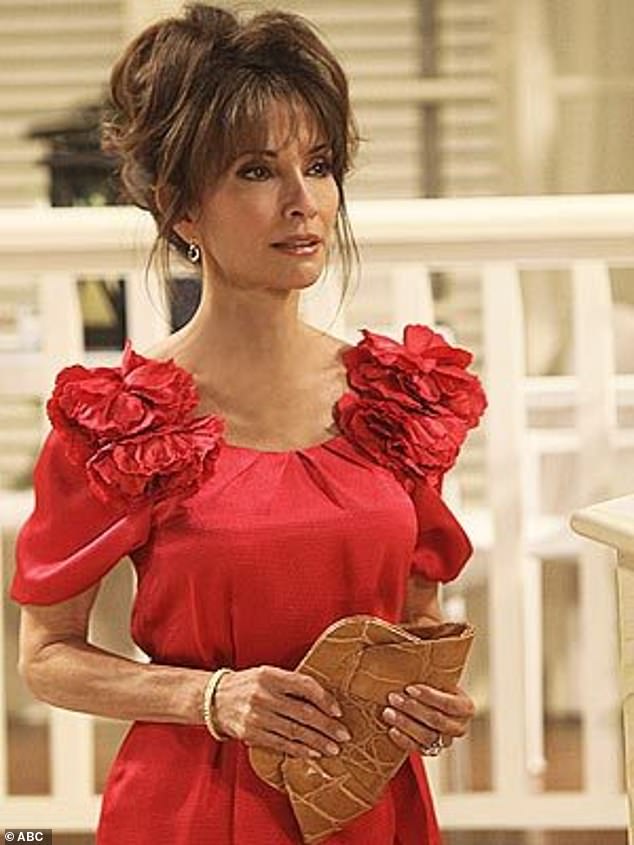 Impressive career: Lucci is known for her role as Erica Kane on ABC’s All My Children from 1970 to 2011

‘Ninety percent blockage — I was shocked,’ Lucci told the magazine. ‘I’m lucky to be alive.’

According to the star’s doctor Dr. Holly Andersen, Associate Professor of Medicine at the Ronald O. Perelman Heart Institute at New York Presbyterian Hospital and Weill Cornell Medical Center, if Lucci hadn’t sought treatment then and there, ‘she could have suffered a significant heart attack or even sudden death.’ 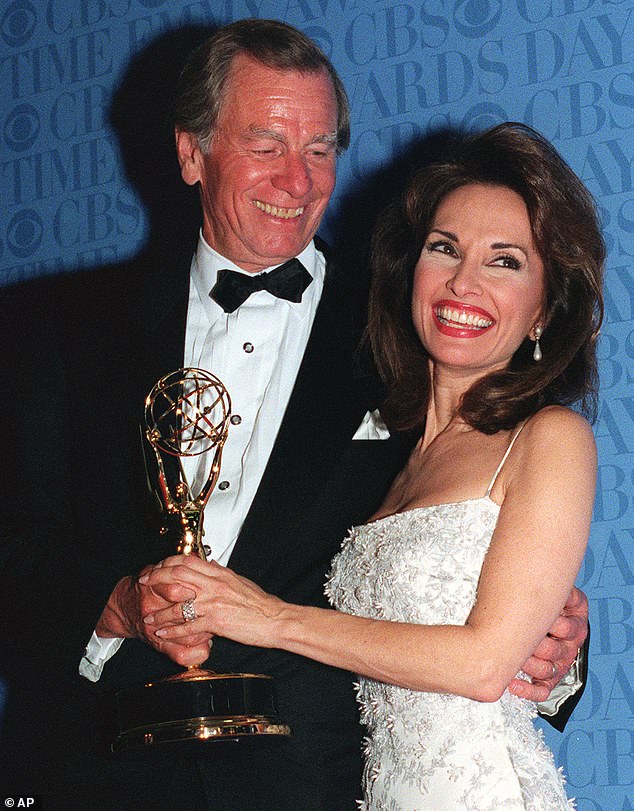 Soap opera legend: Lucci and Huber pictured together back in 1999 after she received a Daytime Emmy

Lucci, an advocate for the American Heart Association’s Go Red for Women campaign, decided to share her story to shed some light on heart health, particularly for women.

‘As a woman you think about breast cancer, not a heart attack,’ the star explained. ‘Every EKG I had was great. My blood pressure was on the lower end of normal.’

‘We often put ourselves on the back burner,’ she admitted. ‘But if your body is telling you something, we need to pay attention.’