‘Having too much fun to feel the pain!’ Strictly’s Tom Fletcher reveals he has injured his foot just days before the new series is set to debut

The McFly star, 36, is one of the celebrities taking part in this year’s series and the hours of gruelling rehearsals have already taken their toll.

Taking to Instagram on Sunday, Tom shared a photo of his left foot with a bandage wrapped around one of his toes. 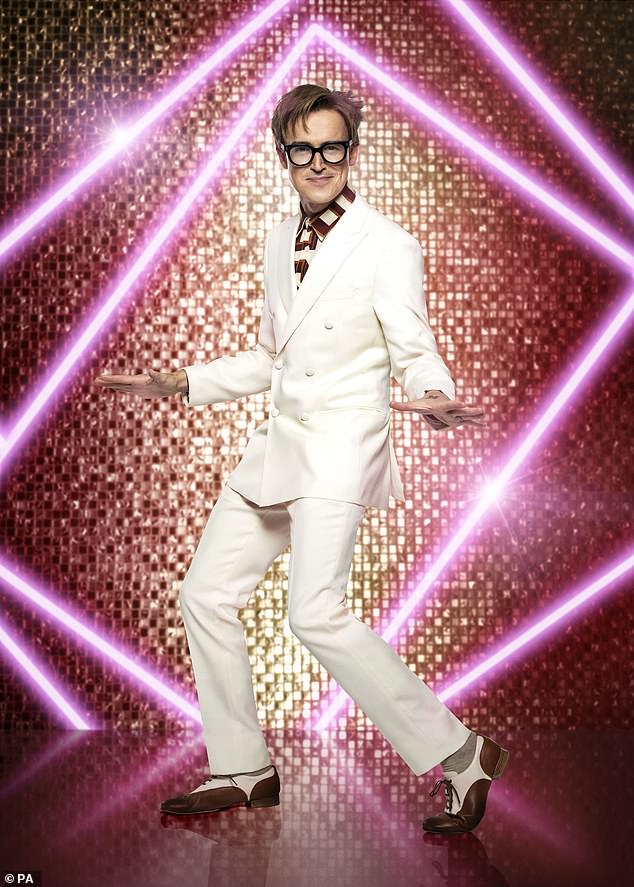 Alongside the snap, he wrote: ‘One day of @bbcstrictly filming and my foot looks like this. Having too much fun to feel pain!

He added: ‘Don’t miss the launch show on Saturday. Can’t wait to tell you who my partner is!’

Fans quickly speculated on who Tom’s dance partner might be with one writing: ‘Hope it’s Dianne [Buswell]’.

Another said: ‘I’m hoping for either Amy [Dowden] or Dianne!!! Honestly soooo excited for this year x’. 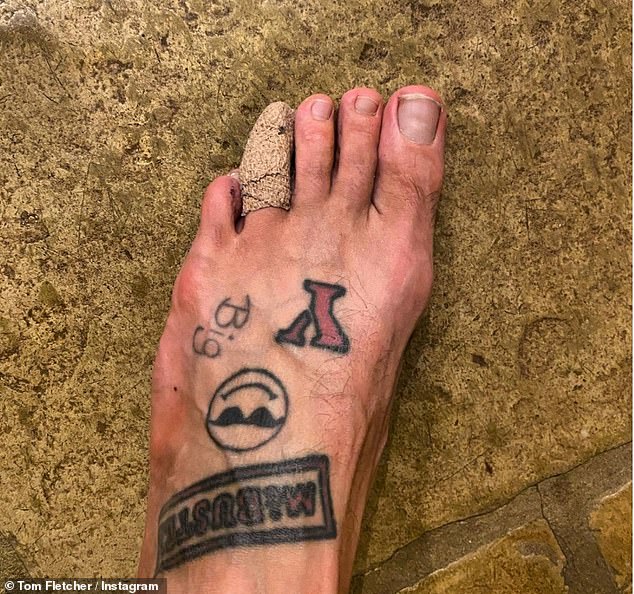 Ouch: Taking to Instagram on Sunday, Tom shared a photo of his left foot with a bandage wrapped around one of his toes

He wrote: ‘One day of @bbcstrictly filming and my foot looks like this. Having too much fun to feel pain!’

Another wrote: ‘It’s either Dianne or Oti [Mabuse]’.

It comes after Adam recently had a photo of him and Tom getting a spray tan removed for ‘sexual activity’ ahead of his Strictly appearance.

The swimmer, 26, took to Instagram on Friday to share the image of him and his fellow contestant Tom about to be bronzed. Reaction: Fans quickly speculated on who Tom’s dance partner might be with one writing: ‘Hope it’s Dianne [Buswell]’.

The McFly singer is in the foreground of the seemingly saucy snap with his arm in the air covering Adam’s modesty while both of them don hairnets, to which the social media site swiftly ruled it as breaking their guidelines.

Although it seems like Tom is covering up Adam’s private parts at first glance, as you look back at the photo the gold medallist is wearing a black thong.

Adam shared a screenshot of the message Instagram sent when they removed the photo which read: ‘Your photo was removed. We removed your photo because it goes against our Community Guidelines on nudity or sexual activity.’

He wrote on the story: ‘Great, removed for sexual activity!’ with a crying laughing face emoji. Removed: It comes after Adam Peaty recently had a photo of him and Tom getting a spray tan removed for ‘sexual activity’ ahead of his Strictly appearance Racy pic: Adam shared a screenshot of the message Instagram sent when they removed the photo which read: ‘Your photo was removed. We removed your photo because it goes against our Community Guidelines on nudity or sexual activity’

Adam added: ‘Mad how Instagram get to decide what I upload and what I don’t. Community guidelines should be your community.’

Because Instagram didn’t work, he later posted the image on Twitter with the caption: ‘It’s @bbcstrictly time! Hope this doesn’t get removed this time [crying laughing emoji].’

Elsewhere, Tom posted his own snap to his grid – which seemingly didn’t break any guidelines.

He posed with his two fingers clasped onto a paper black thong pulling a funny face while looking noticeably tanned. 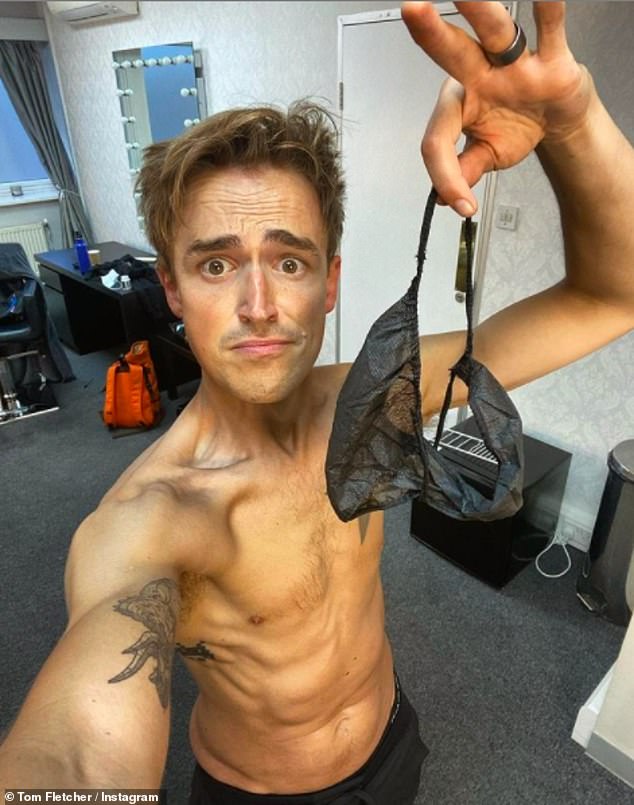 More PG: Elsewhere, Tom posted his own snap to his grid – which seemingly didn’t break any guidelines. He posed with his two fingers clasped onto a paper black thong pulling a funny face while noticeably tanned

The veteran dance show was famously disrupted in 2020 thanks to the ongoing COVID-19 pandemic.

But it seems things are back to normal in 2021 – apart from one or two factors still deemed too tricky to navigate amid the global health crisis.

The Blackpool episode ordinarily takes place near the end of the series, but was axed last year with restrictions throwing up logistical difficulties on the production. 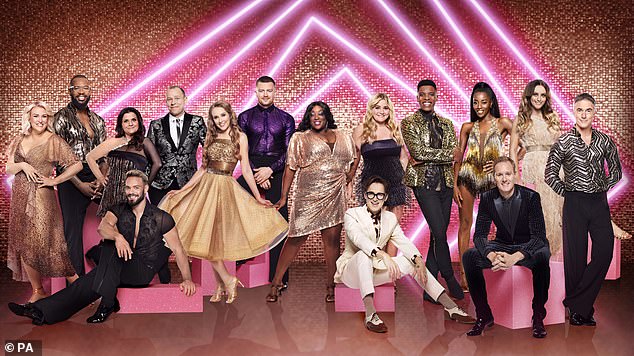 Cast: The full 15 celebrities will be taking part again, having cut to 12 last series due to the Covid-19 pandemic

But 2021 will include the show’s themed weeks – such as movie week, musicals week and Halloween week.

Last year, these were scrapped, proving too complicated to manage amid the pandemic. The show’s Christmas special will also be back, with the show set to start in its usual early-autumn time slot, rather than in October, like last year.

The full 15 celebrities will be taking part again, having cut to 12 last series.

Strictly Come Dancing returns on Saturday, September 18 on BBC One.

STRICTLY COME DANCING 2021: WHO ARE THE CONTESTANTS?

Tom says: ‘I’m so pleased the news is out it’s been so hard keeping it secret. Equal parts excited and terrified.’

Fun fact: Tom’s McFly bandmate Harry Judd won Strictly Come Dancing in 2011. Tom’s wife Giovanna Fletcher is the reigning champion of I’m A Celebrity… Get Me Out Of Here!

Robert says: ‘It’s very exciting but with a slight undertone of quivering terror.’

Fun Fact: Robert squeezed into a shiny leotard to take the title of Let’s Dance For Comic Relief in 2009, performing What A Feeling from ’80s film Flashdance, beating the likes of Keith Lemon and Paddy McGuinness to the title.

Rhys says: ‘I have dreamt about being on this show, and I know for a fact that it is going to exceed every expectation’

Fun fact: Rhys has been an actor since the age of ten, performing alongside Matt Smith and Hugh Bonneville.

Katie says: ‘I’m really not a dancer, but I’m so excited to learn a new skill on this crazy journey and cannot wait to slip into some sequins along the way.’

Tilly says: ’I’m going to put my heart and soul into this and can’t wait to get my dancing shoes on!’

Nina says: ‘I think I should do this before I’m too old and can’t walk anymore. I just want to grab life by the horns and just enjoy it.’

Fun fact: Nina is a JDRF Ambassador and was awarded an OBE in the 2021 New Year’s Honours List.

Adam says: ‘I’m really looking forward to doing something totally different and challenging myself away from the pool.’

Ugo says: ‘What a dream come true! Strictly is the biggest entertainment show on TV and I can’t wait to show everyone I’ve got more than just dad dancing moves.

Fun fact: Beginning his rugby career at Harlequins in 2002, Ugo went on to make 241 appearances for the club where he scored 89 tries, won a Premiership and made his England debut in 2008.

AJ says: ‘I think it’s going to be really challenging. I can’t wait for the sequins, the wigs, the glitz and the glamour.’

Fun Fact: Apocalypse Wow hosts AJ has featured on a whopping 14 TV shows this year, competing in the likes oF Cooking With The Stars and Celebrity Karaoke Club. She has appeared as a panelist on Strictly Come Dancing: It Takes Two in the past, too.

John says: ‘I’m so grateful, excited, and nervous to be joining the Strictly 2021 family… I’ve been wearing sequins and jazzy attire since I was three years old and can’t wait to hurl myself, full throttle, around the most glamorous dance floor on earth’

Fun Fact: John is set tp be part of the first ever all-male partnering – the first in 17 years of the show.

Sara says: ‘I’m really nervous because so far the producers keep asking me if I can dance… Truth be told – I haven’t got a clue! I’ve not danced since I did ballet lessons when I was little.’

Fun fact: Sara was the youngest ever dragon on BBC show Dragons’ Den.

Dan says: ‘I’m enjoying the experience when it starts of learning to dance. I’ll be honest I’m not making room on any shelves in my house for the glitterball.’

Fun fact: Dan recently quit Football Focus after 12 years at the helm and has been covering Tokyo Olympics.

Greg says: ‘It’s about being out there and exposing yourself as someone who can’t dance, and learning.’

Fun fact: Greg is married to the actress Emma Thompson who he met while filming Sense and Sensibility.

Rose says: ‘I hope I will do the deaf community proud and break down more barriers. I am also very excited to learn an incredible new skill.’

Judi says: ‘I’m truly looking forward to pushing myself in something that I could have only dreamed of doing and now it’s actually coming true!’

Fun fact: Judi began comedy when she performed a set in front of her class for a degree module.