EXCLUSIVE ‘They couldn’t keep their eyes off each other’: Strictly pro dancer Nikita Kuzmin is dating celeb contestant Molly Rainford after pair cosy up at NTAs – a week after his split from girlfriend

Newly single Nikita, 24, cosied up to singer Molly, 21, at the National Television Awards after last night’s party and the pair couldn’t keep their eyes off each other as they flirted together until the early hours.

Their blossoming romance comes a week after it was revealed that Nikita, who’s partnered with Paralympic swimmer Ellie Simmonds, 27, had split from his girlfriend of five years, fellow dancer Nicole Wirt. 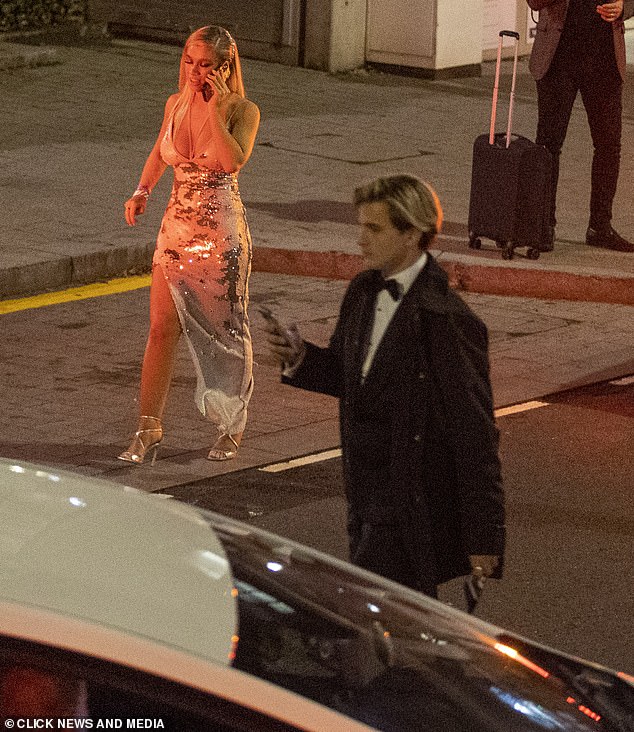 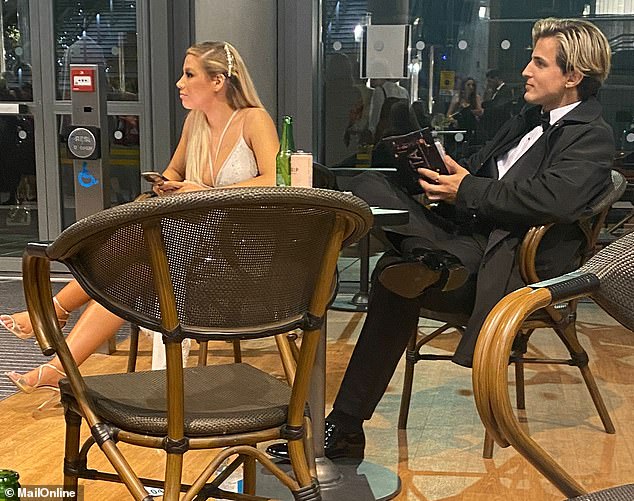 Blossoming romance: The Strictly pair sit together as they waited for their taxis once the NTAs after-party had finished before Nikita escorted co-star Molly out of the venue

A source told MailOnline: ‘Molly and Nikita couldn’t keep their eyes off each other the entire evening.

‘They didn’t mind who could see them flirting and chatting away – and Molly had a huge smile on her face.

‘The chemistry between them was clear and they even waited until they had both safely got into taxis at the end of the night – but it appeared that they were making arrangements to continue the after party just the two of them.’

Nikita and Molly were seen leaving the NTAs after-party, which was held at Wembley’s Brent Civic Centre, together, resisting the urge to hold hands as they left the venue.

MailOnline has approached Strictly and Molly’s representatives for comment. 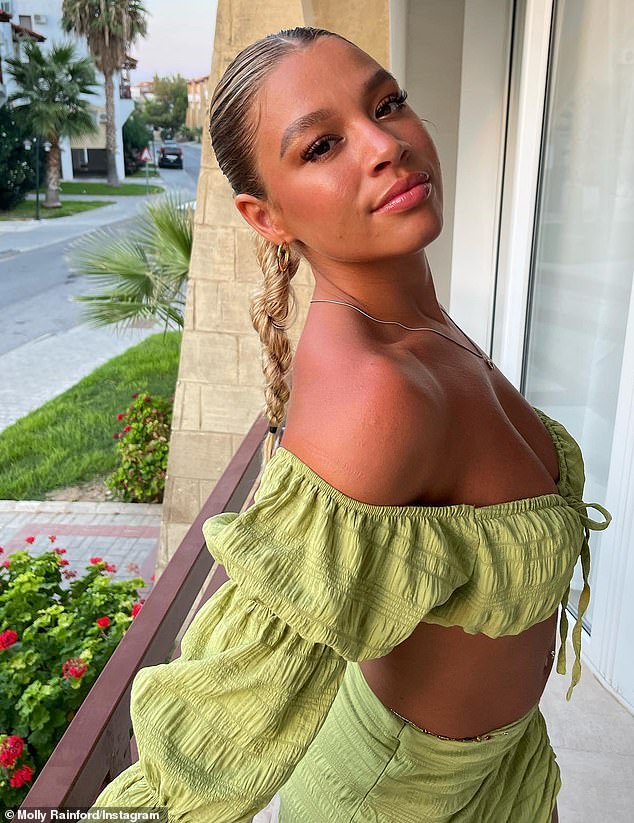 ‘Molly had a huge smile on her face’: Nikita cosied up to singer Molly at the National Television Awards after-party and the pair couldn’t keep their eyes off each other

The pair were both on their phones as they made last-minute arrangements to leave the NTAs after-party.

Nikita and Molly partied until 1am despite needing to be up for training ahead of the Strictly live show on Saturday – while many of their co-stars opted to skip the ceremony.

Giovanni Pernice, who was voted off the series with partner Richie Anderson last week, was at the ceremony and party, where he joined Anton Du Beke in celebrating his Best Judge win.

Elsewhere, pro dancers Nadiya Bychkova and Kai Widdrington put on an affectionate display, passionately kissing as they left the bash. 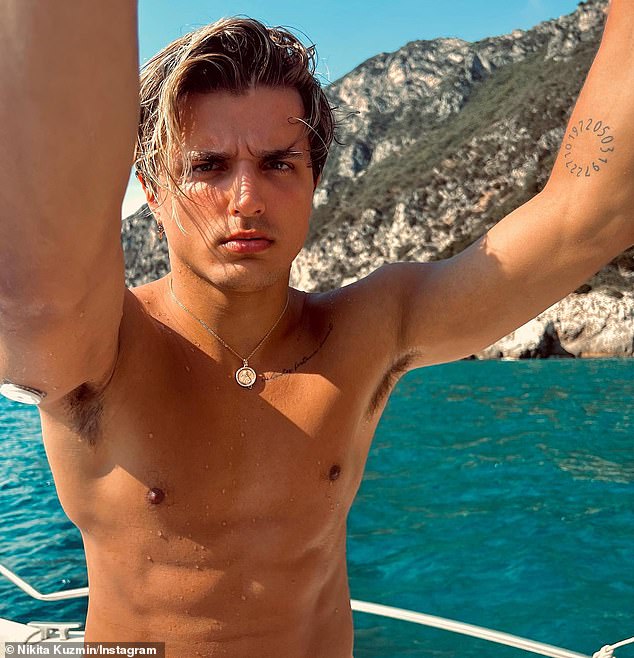 Moving on: Their blossoming romance comes a week after it was revealed that Nikita, pictured, had split from his girlfriend of five years, fellow dancer Nicole Wirt 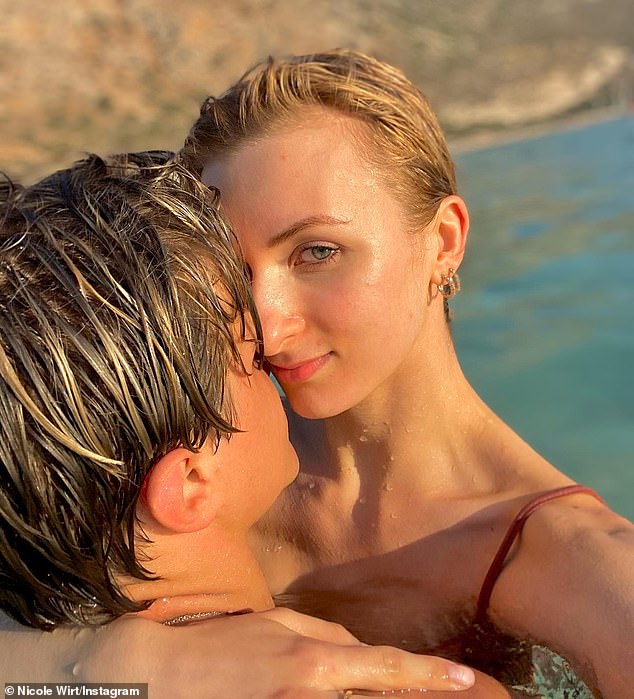 It’s all over: A source said Nikita was keen to ‘focus’ on this series of Strictly and the pair’s long distance relationship was no longer working for them. Pictured: The former couple

It was revealed last week that Nikita had split from dancer girlfriend Nicole, who’s predominantly based in Germany.

A source said Nikita was keen to ‘focus’ on this series of Strictly and the pair’s long distance relationship was no longer working for them.

Nikita is competing for the Strictly Glitter Ball trophy this year with swimmer Ellie while CBBC presenter Molly has already topped the leaderboard alongside her professional partner Carlos Gu.

In the last BBC series, Nikita was rumoured to be dating his celebrity partner Tilly Ramsay, 20, but the pair are just good friends. 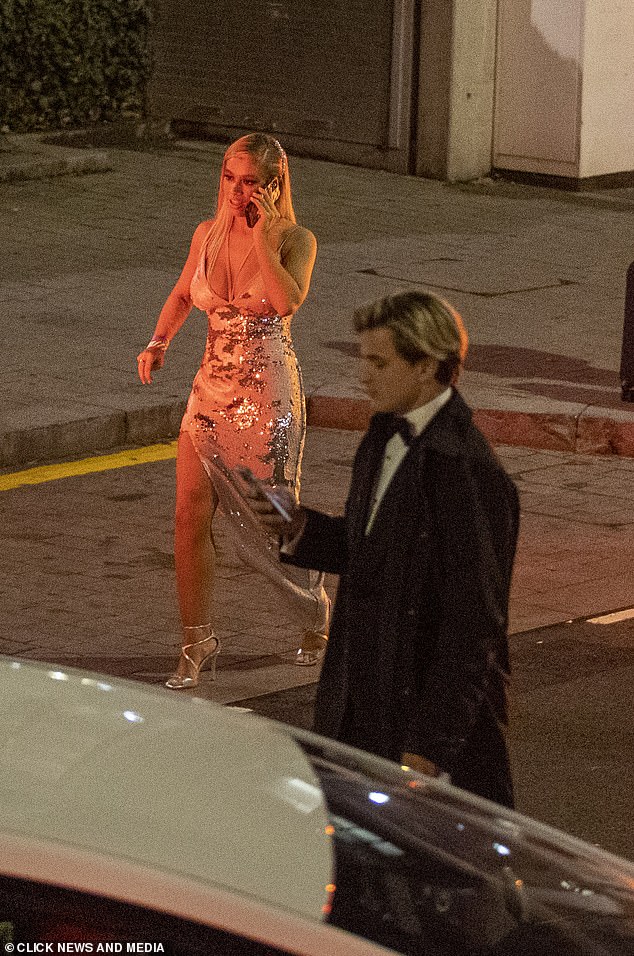 New couple alert: Nikita and Molly were spotted as they left the NTAs after-party together following the star-studded awards ceremony in north London 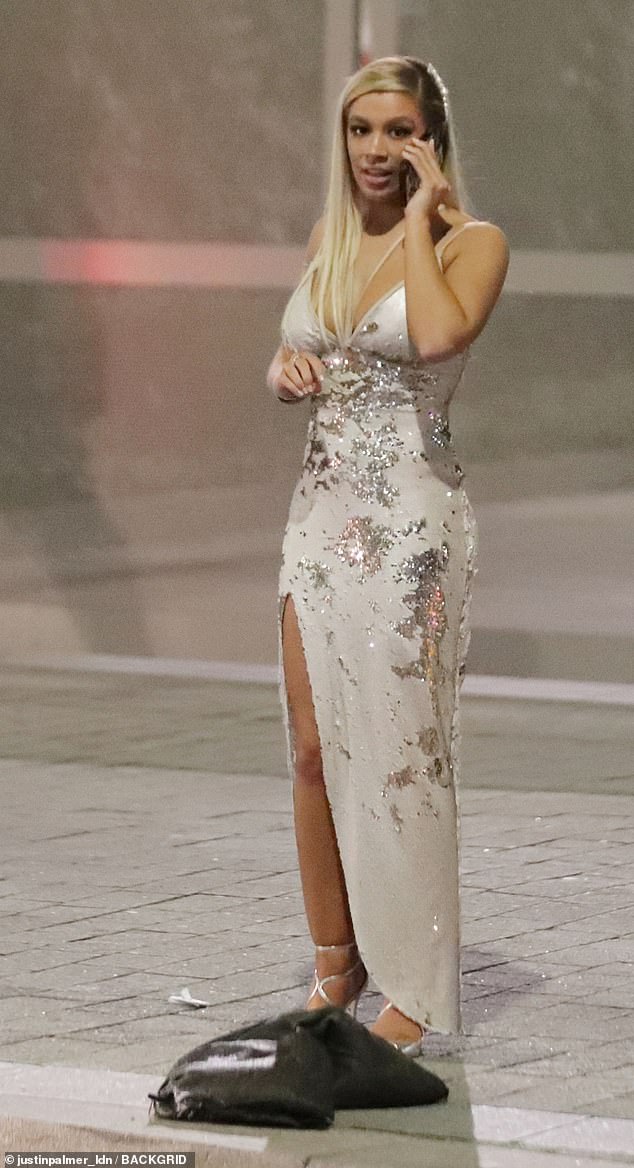 Home time: Molly was seen on her phone as she organised a taxi for herself after leaving Wembley’s Brent Civic Centre during the early hours last night 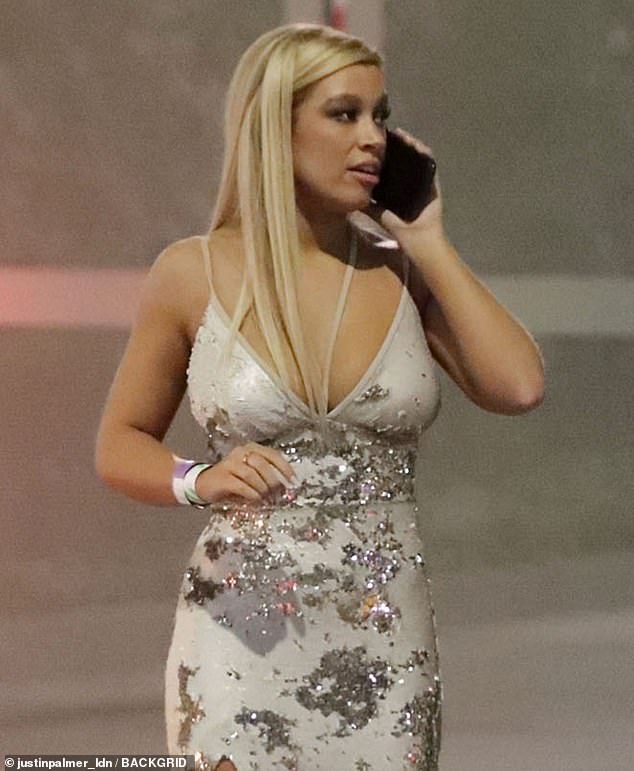 End of the night: The Strictly star braced the cold weather in her silver gown as she attempted to make her way home 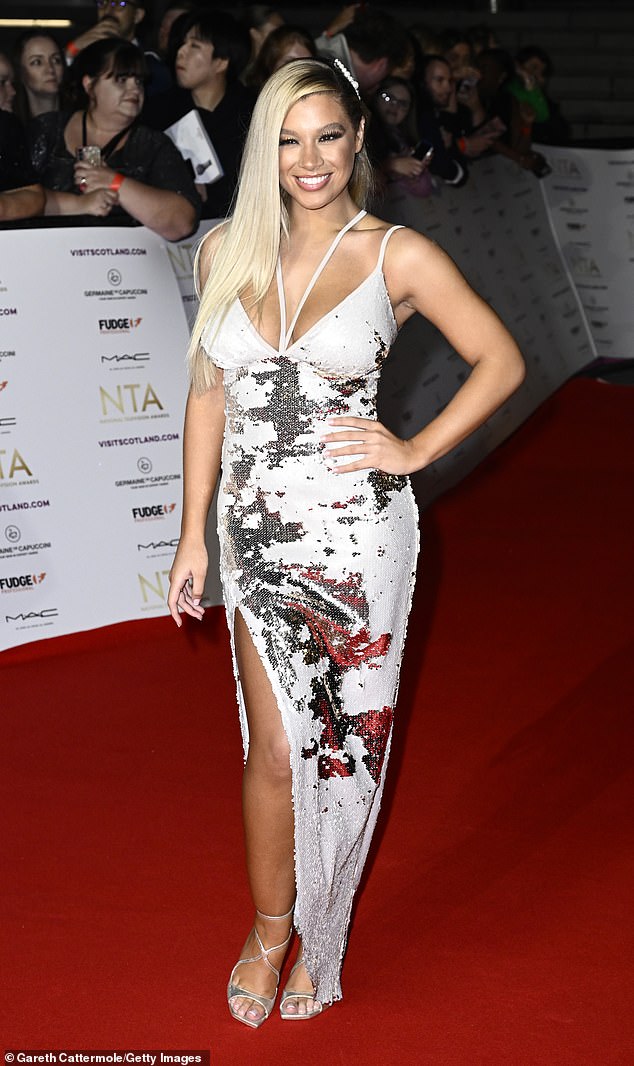 Gorgeous: Singer Molly stunned at the National Television Awards in a sequin thigh-high split dress as she posed on the red carpet

Nikita’s Strictly partner Ellie has been praised for ‘smashing prejudices about what a dancer can be’ by the dwarfism community following her appearances on the Saturday night show.

She told OK! Magazine: ‘Dwarfism has never stopped me from doing anything.

‘Strictly is a prime-time show… in the lead up to Christmas everyone watches it, so it’s so important they are inclusive. When I was a kid, I don’t remember seeing anyone with a disability on TV.

‘It shows if I can do it – and I’ve seen the likes of Rose who’s changing the world of disability and inclusivity – then people watching at home can adapt it to them, too.’ 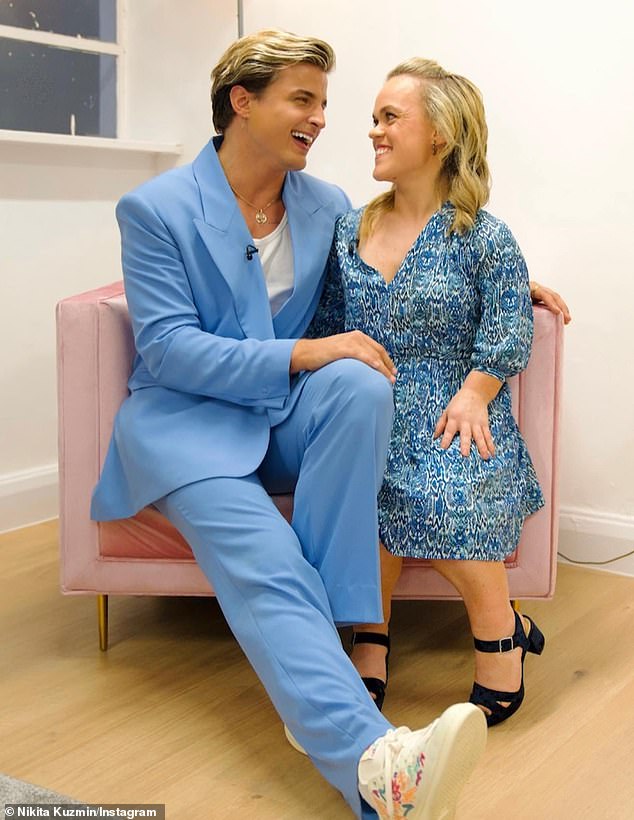 Duo: Nikita is partnered with Ellie Simmonds and the Paralympic swimmer has been praised for ‘smashing prejudices about what a dancer can be’ by the dwarfism community 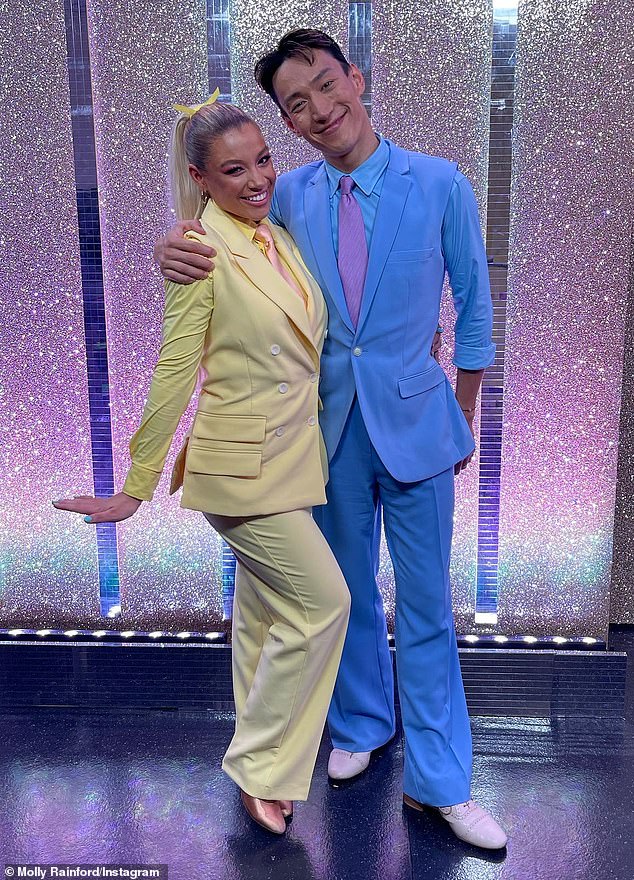 Going for gold: Molly is competing for the Strictly Glitter Ball trophy with newcomer Carlos Gu and the pair have already impressed the judging panel with their routines 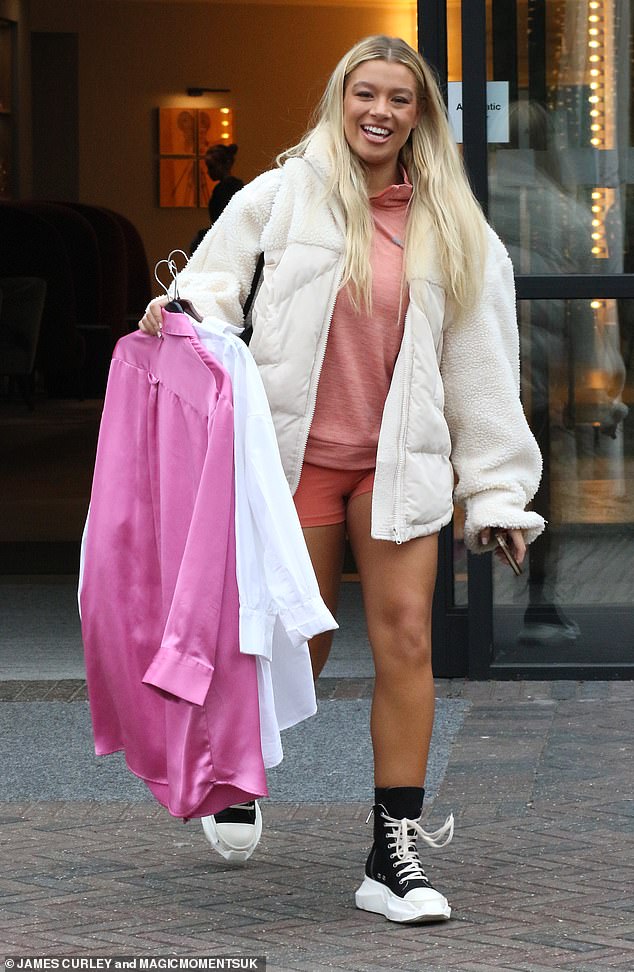 Time to work: Molly was all smiles as she left her hotel this morning as she heads to rehearsals to prepare for Strictly’s live show tomorrow