‘You’re not allowed to be honest in this world’: Strictly’s James Jordan claims all men desire slim women as he defends comments about his wife Ola’s weight gain

Polish beauty Ola candidly opened up about her weight gain, revealing she used to weigh 8st and now weighs 11½st, while former dancer James has put on 5st and weighs 16st.

Speaking about how her three stone weight gain has affected their love life, James, 44, told how sex with his wife ‘is definitely not better with mum and dad bods’. 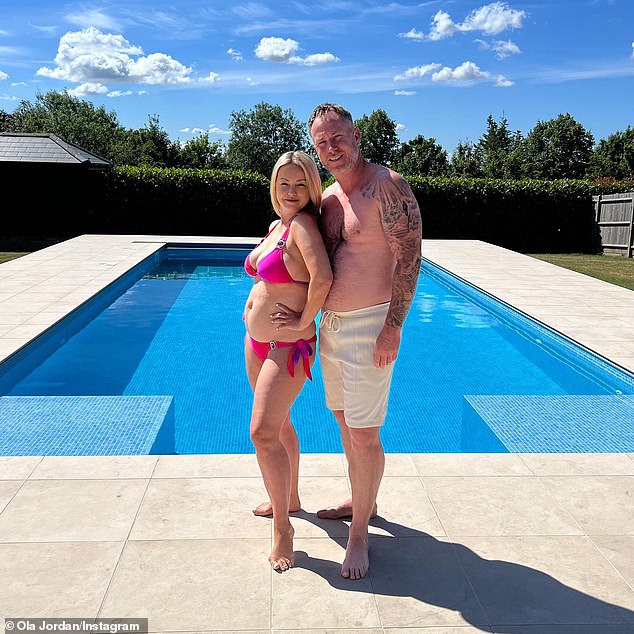 ‘You’re not allowed to be honest in this word’: Former Strictly Come Dancing star James Jordan has defended his recent controversial comments about his wife Ola’s weight – after admitting he prefers her ‘smaller’

Addressing the controversy this week, James told Express.co.uk: ‘Hang on one second, you’re not allowed to be honest today in this world.

‘They might tell you, ‘Oh you look lovely darling’ but would they prefer you slimmer? Yes they would. That’s just a fact, I’m just telling you that every single man 100 per cent feels that way.’

Ola was inundated with support last month when she admitted to feeling ‘horrified’ and ‘disappointed’ by her ‘mum bod’ as she shared a bikini snap to social media. 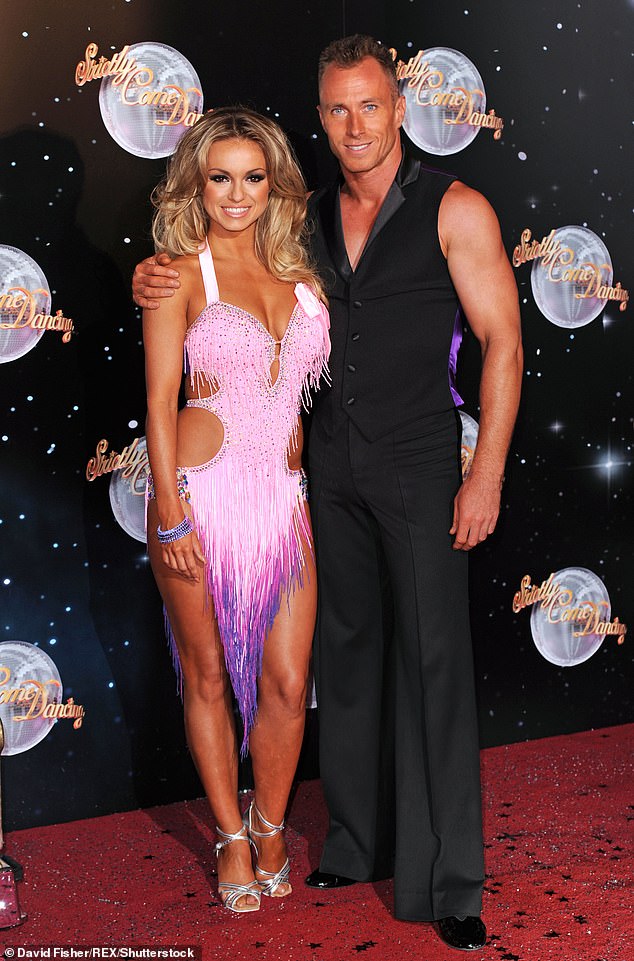 Addressing the controversy this week, James said: ‘There’s no man, let me tell you ladies out there, there’s no man in the world who will say, ‘Oh no, I much prefer my wife being much bigger and heavier’. There’s no man, they don’t exist.’

Speaking about their ‘mum and dad bods’, the couple said they feel like their sex life isn’t as ‘exciting’ anymore as they shared their desire to ‘get back in shape’.

Ola, who appeared on Strictly from 2006 to 2015, told The Sun: ‘The sex life is definitely different, if not worse, because we are so fat and don’t want to move after a bag of crisps and a Chinese.

‘The bellies get in the way of us when it comes to sex and I’m a bit heavy now. It’s not as exciting.’

James added: ‘Sex is definitely not better with the mum and dad bods, I can’t throw her about any more like I am used to doing.’ 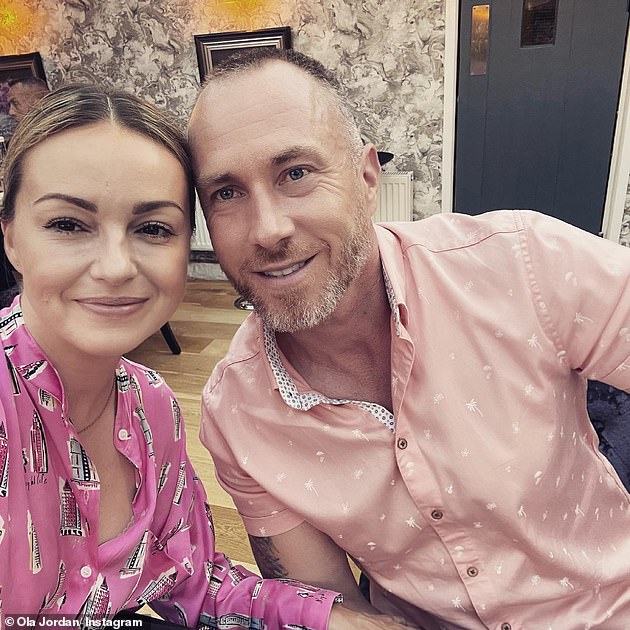 Couple: James went on to say that he ‘prefers’ Ola and himself ‘smaller’, saying he doesn’t want to upset her but he wants them both to get fitter for their health

James went on to say that he ‘prefers’ Ola and himself ‘smaller’, saying he doesn’t want to upset her but that he wants them both to get fitter for the sake of their health.

‘I will say I prefer Ola smaller. Of course I still love her and fancy her,’ he said.

The couple – who share a two-year-old daughter Ella – said they adopted ‘bad lifestyle choices’ during the Covid-19 lockdown, after James tragically lost his father.

They went on to say that although they are supporters of body positivity, they are both classed as obese and want to lose weight for health reasons, and for their daughter Ella.

Ola said she never wants to make anyone ‘feel bad’, but said fitness is important to her because she wants to feel ‘healthy’ again as she reflected on her professional dancer days. 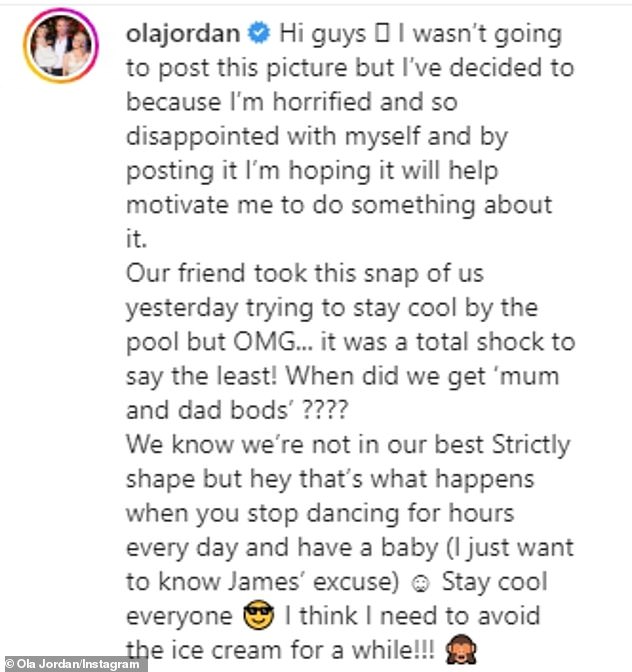 ‘Disappointed’: Their latest comments come after Ola shared a bikini-clad snap with her husband James and admitted she felt ‘horrified’ and ‘shocked’ at her ‘mum bod’ 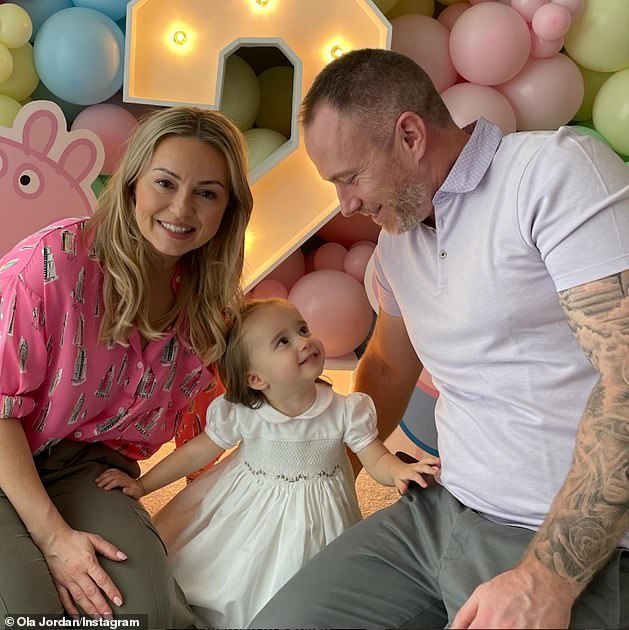 Their latest comments come after Ola shared a bikini-clad snap with her husband James and admitted she felt ‘horrified’ and ‘shocked’ at her ‘mum bod’.

Last month, she took to Instagram to share a picture of herself and her husband soaking up the sun in their swimwear as they stood by their swimming pool.

In a caption, the British-Polish ballroom dancer candidly admitted she felt ‘horrified’ and ‘disappointed’ at her ‘mum bod’, saying she was posting the snap to ‘motivate’ herself.

She penned: ‘Hi guys, I wasn’t going to post this picture but I’ve decided to because I’m horrified and so disappointed with myself and by posting it I’m hoping it will help motivate me to do something about it.

‘Our friend took this snap of us yesterday trying to stay cool by the pool but OMG… it was a total shock to say the least! When did we get ‘mum and dad bods’ ????

‘Stay cool everyone. I think I need to avoid the ice cream for a while!!! Couples That Eat Together Stay Together @jamesjordan1978.’

Her celebrity pals were quick to flock to the comments to send her words of support, gushing that she looks ‘stunning’ and ‘gorgeous’ and urging her to go easy on herself.

Reflecting on the bikini-clad snap, Ola explained that in her Strictly days, she was doing ten-hour full days of dancing and would also go to the gym, while she has since left the show and had a baby.

Ola said her body has ‘changed’ since the show, while James also agreed that his body too has transformed since he left Strictly back in 2013 after seven years. 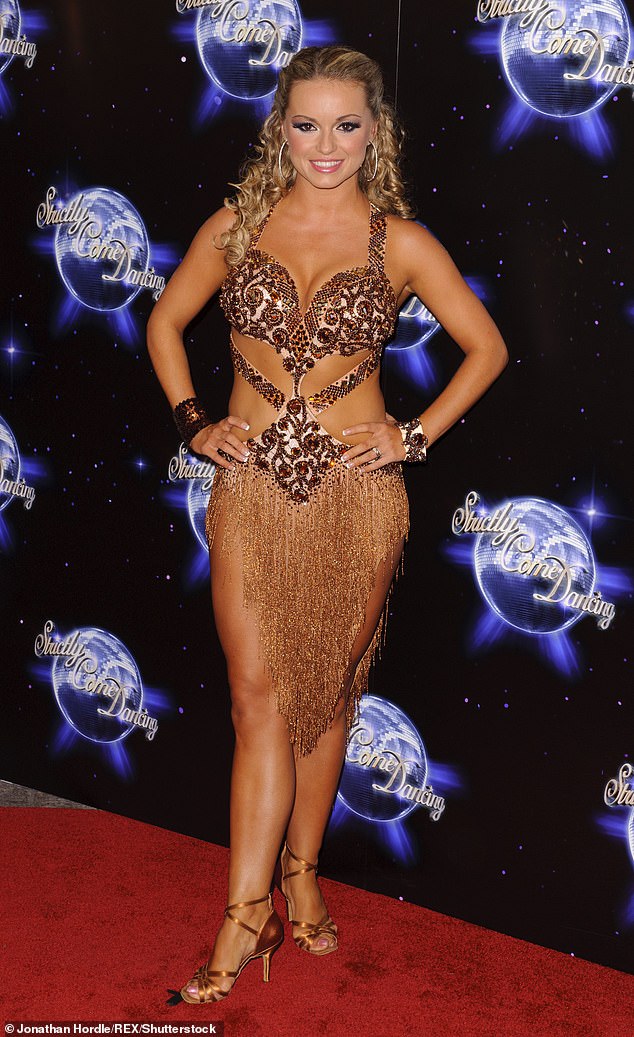 Lifestyle: The couple said they adopted ‘bad lifestyle choices’ during the Covid-19 lockdown, after James tragically lost his father (Ola is pictured in 2010)

James described the beachwear picture as ‘great motivation’ for their plans to get ‘back in shape’, but admitted they will never go back to ten-hour days of dancing again.

Mother-of-one Ola said although other people tell her she looks ‘great’, she feels ‘uncomfortable’ with how she looks and said she is ‘sad’ that she is not as fit as she wants to be.

It is not the first time that the couple have spoken out about body image since posting the snap, as they both discussed their weight gain on Loose Women.

She admitted she feels she has let herself go as she discussed her weight gain since welcoming her daughter, explaining she and James find it difficult to fit in any exercise.

She said: ‘It’s just accepting what you are now. Obviously I had an amazing body on Strictly, everyone used to look up to me. Coming to the realisation that it’s not the same and it’s not going to be the same anymore…’ 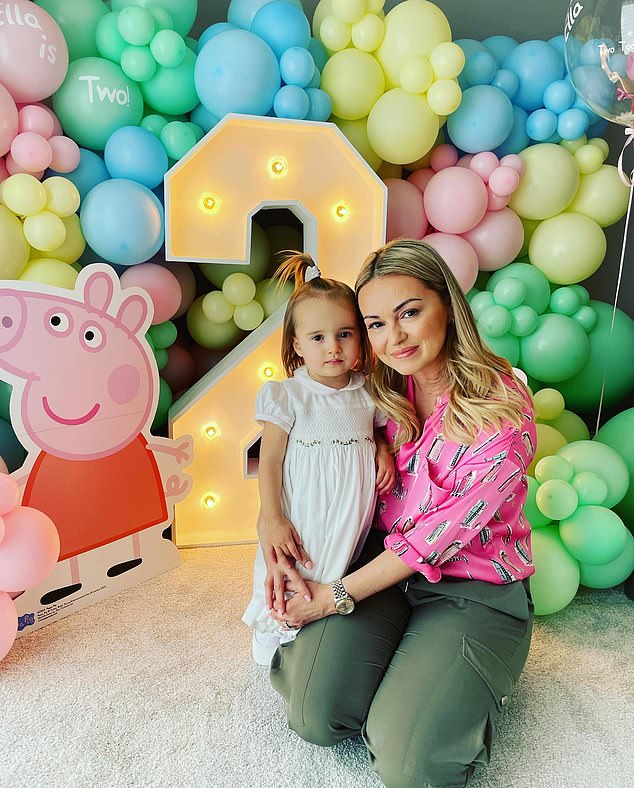 Motherhood: Ella said  she and James are both classed as obese for their height and want to lose weight for health reasons, and for their daughter Ella

James added: ‘We’re not training ten hours a day like we used to,’ with Ola agreeing: ‘Yeah, it’s really hard. It’s finding time. Ella takes everything, she is everything.’

The dad-of-one admitted: ‘It’s not rocket science is it? It’s what you eat. If you’re not exercising, you’re going to put on weight.

‘I always said to Ola, you’ve always flucated with weight, because I was training so much all the time, I could eat whatever I wanted and said, ‘I don’t understand why people put on weight’, and then put on three stone after Strictly’.

Speaking about her self-esteem, Ola admitted she currently doesn’t feel happy with her current appearance, explaining: ‘‘People say, ‘you look great’ but I don’t feel like that. I don’t feel like I’m in my body, it’s weird.’

James added: ‘It gets harder as you get older as well.’ 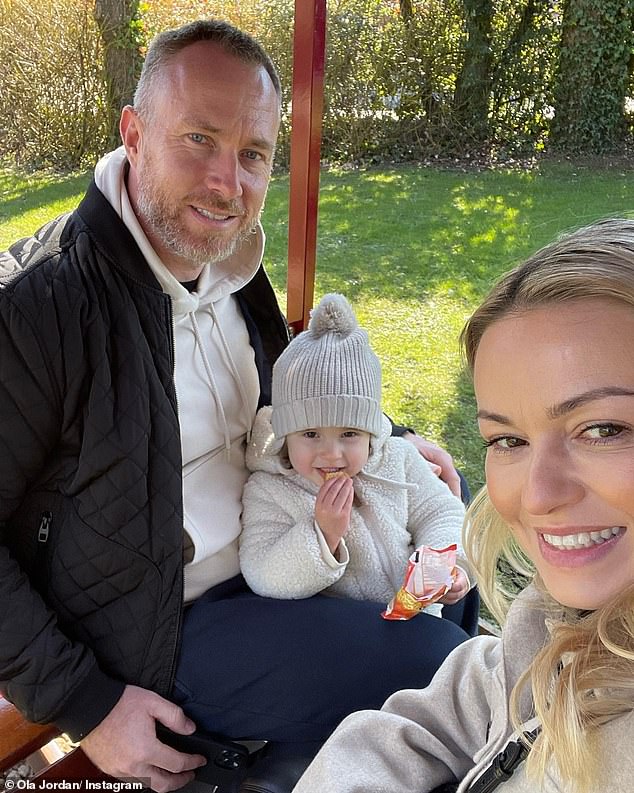 Candid: It is not the first time that the couple have spoken out about body image since posting the snap, as they both discussed their weight gain on Loose Women

Ola also recently spoke about learning to accept her ‘mum bod’ after sharing her bikini snap.

Speaking exclusively to MailOnline, Ola revealed that James loves to ‘take the mickey’ out of her for her weight, but admits she knows ‘he loves me whatever size I am’, despite neither of them being in ‘Strictly shape’.

She said: ‘You know what James is like – he’s always taking the mickey. He jokes I’m not the woman he married but then I say to him – what about you and your big belly?!

‘But obviously we don’t really mean it – much! I know he loves me whatever size I am but let’s face it neither of us look in Strictly shape do we – so we’ve got matching mum and dad bods now!’

The star opened up on how her priorities have changed since having her daughter, with her no longer worrying as much about her diet.

She said: ‘To be honest I’ve always struggled with my weight. I was always one of the curviest girls on Strictly amongst the professional dancers.

‘It’s never been easy for me. So now it’s been enjoyable not to be watching what I’ve been eating and to have a drink and some chocolate when I want.

‘And definitely since having Ella my priorities have changed – she is my number one priority now. So I have better things to think about than a 24 inch waist!’

She added: ‘My outlook has totally changed since being a mother. I’m looking after this little person who totally depends on me, so worrying about how I look is not top of my list.’

Despite this, Ola confessed she still has her low moments, admitting: ‘I don’t feel like I’m in my right body because I’ve never been this big before and I’m not used to having to cover up my body and hide away behind baggy clothes. 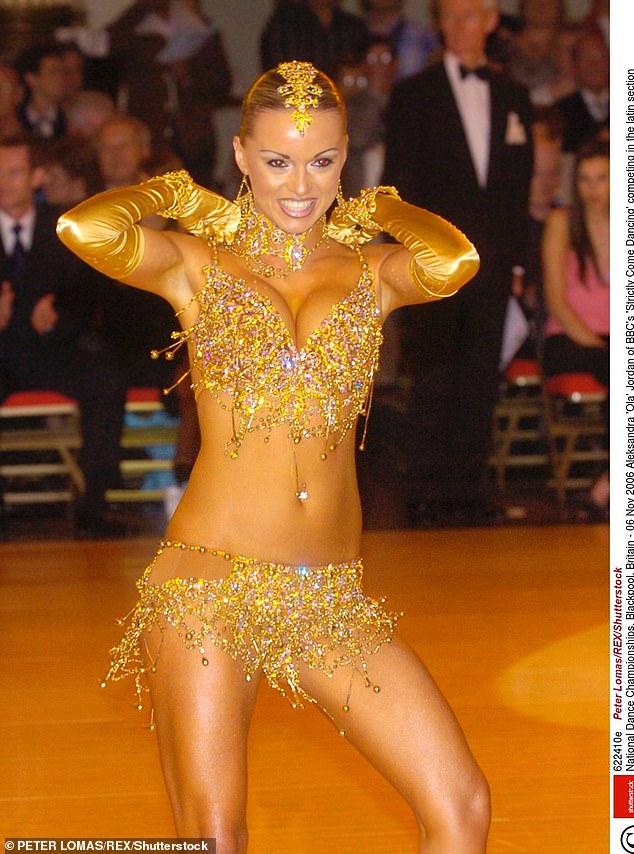 Confidence: Speaking about her self-esteem, Ola (pictured in November 2006) admitted she currently doesn’t feel happy with her current appearance

Ola shared that her bikini snap with James was a ‘turning point’ in regaining her body confidence, remarking that she doesn’t want to ‘accept my body like this’.

Explaining why she felt it was important to share the photo, she said: ‘When I first saw the picture (which a friend took at our house) I was absolutely horrified – and mortified.

‘You know what it’s like, if you’ve put on a bit of weight, you hide away in baggy clothes and avoid looking in full Iength mirrors! So this was a bit of a shock.

‘But I thought – you know what I’ve had a baby and no I don’t look like I did in my time on Strictly – but I’m not dancing for six hours a day. So I thought I should just be honest and share it because this is mum life right? Also I’m not alone – I’ve had a baby. What’s James’s excuse?’

Despite being nervous about what the response would be, Ola reveals she has been inundated with positive and supportive messages.

She said: ‘I was nervous that people would be really mean because I don’t look like the girl in the catsuit any more. But actually I’ve been overwhelmed with how supportive people have been. I’ve not had one nasty message at all.’

Ola – who along with James has been classed as ‘clinically obese’ – admitted in a candid Instagram video that she fears she may never get her dancer’s figure back.

Speaking in their joint column in Hello! magazine, Ola and James – who quit Strictly in 2015 – told how they difficult it is to lose the pounds amid raising Ella, before adding they are motivated to do so for the sake of the tot.

Ola went on to say that she felt like she was ‘hiding’ previously, but has been warmed by the overwhelming support she received from her picture as she told how people could relate as it’s ‘hard’ to lose the weight. 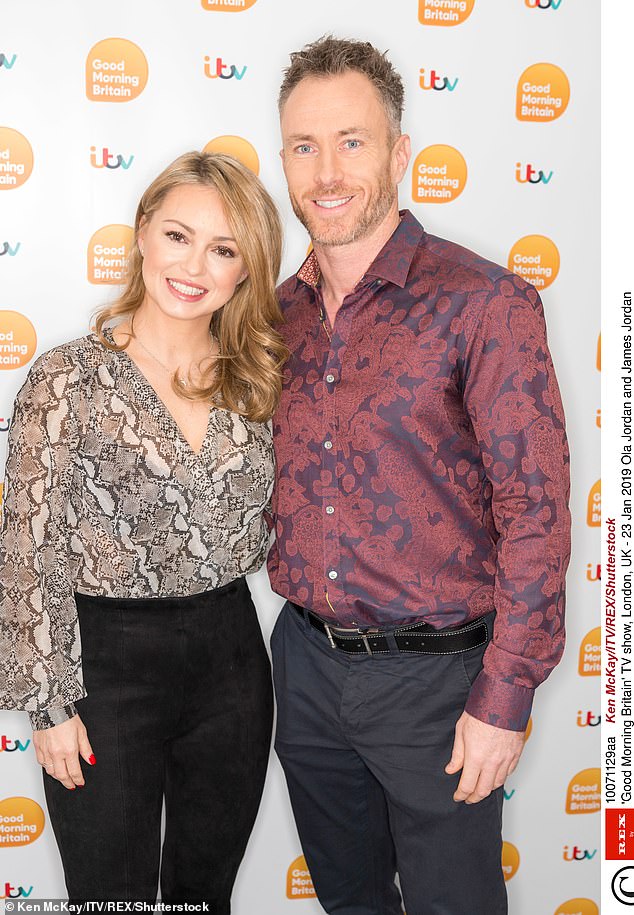 Marriage: Ola revealed that husband James loves to ‘take the mickey’ out of her for her weight, but she takes it right back, pointing out that she’s had a baby (pictured in 2019)