She took a break from posting on Instagram on Saturday after going wild on a huge shopping haul and tiring herself out.

And Stacey Solomon made an adorable return to social media on Sunday morning as she blew raspberries in bed with her one-year-old son Rex.

The TV star, 30, looked well-rested as she relaxed in a cream top and pretty chain necklace as she snuggled her adorable little boy. 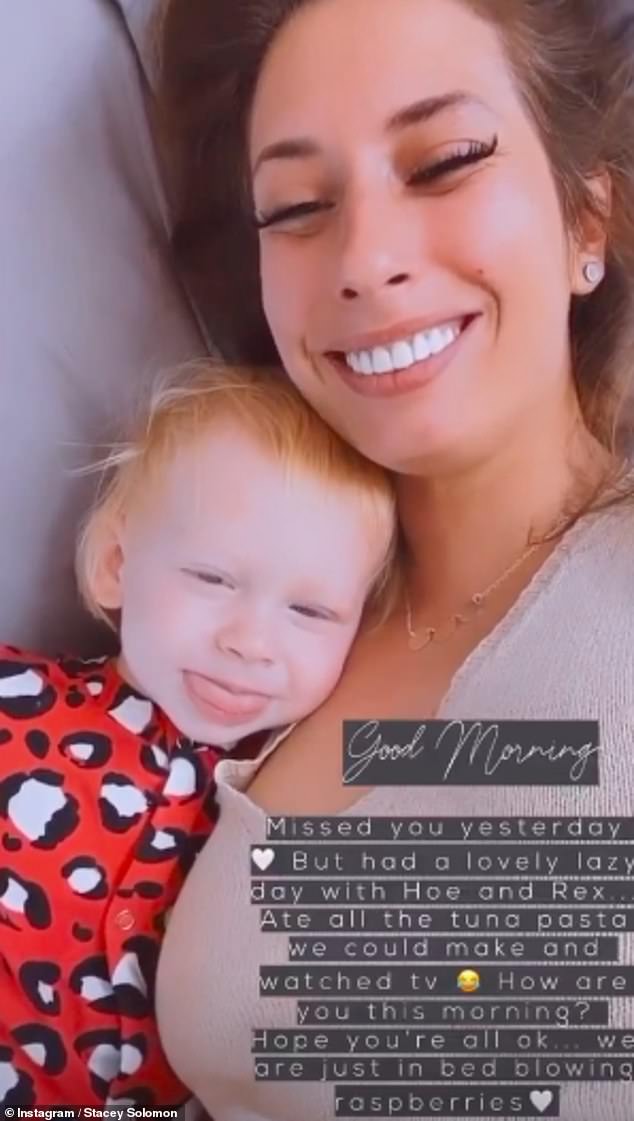 She’s back! Stacey Solomon, 30, made an adorable return to social media on Sunday after she took a day off to rest following a huge shopping haul which left her feeling ‘lethargic’

As his mother smiled for the camera, Rex blew raspberries and encouraged Stacey to join in.

The brunette beauty penned: ‘Missed you all yesterday. But had a lovely lazy day with Hoe and Rex. Ate all the tune pasta we could make and watched TV.

‘How are you this morning? Hope you’re all ok… we are just in bed blowing raspberries.’

On Saturday the social media sensation, who often shares snaps of the bargains she has bought or home organisation, announced she would be taking a day off. 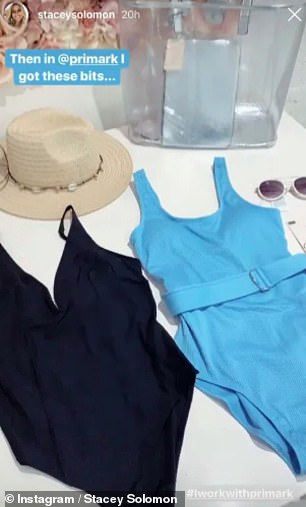 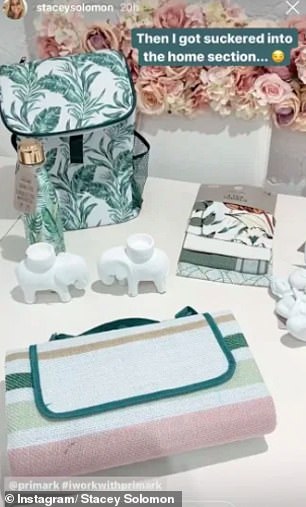 What a haul: The TV star shared her shopping finds with her fans, including two new swimsuits (left) and a selection of homewear (right) items from Primark 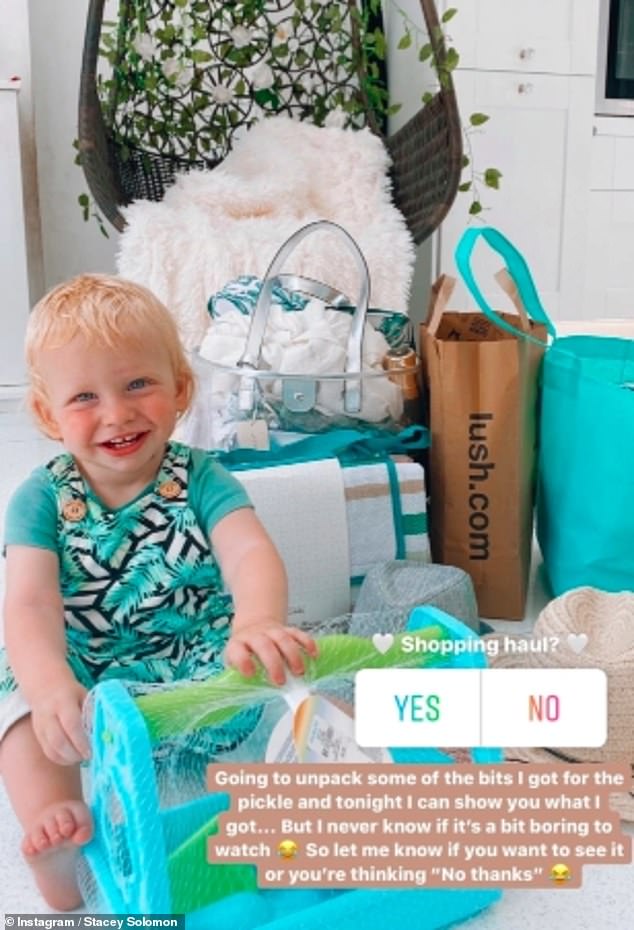 Shopping partner: Little Rex also got a treat out of the haul and was full of smiles as he sat next to all of his mum’s bags

She explained how she was enjoying a ‘lazy morning’ with her youngest son and wouldn’t be sharing any content.

Stacey wrote: ‘I feel a bit lethargic today, I’m going to have a phone in the draw day and eat everything in the house. Whatever you’re doing today I hope you have a lovely day.’

The announcement came after the mother-of-three posted pictures of the items she had bought in high street favourites such as Primark and Flying Tiger. 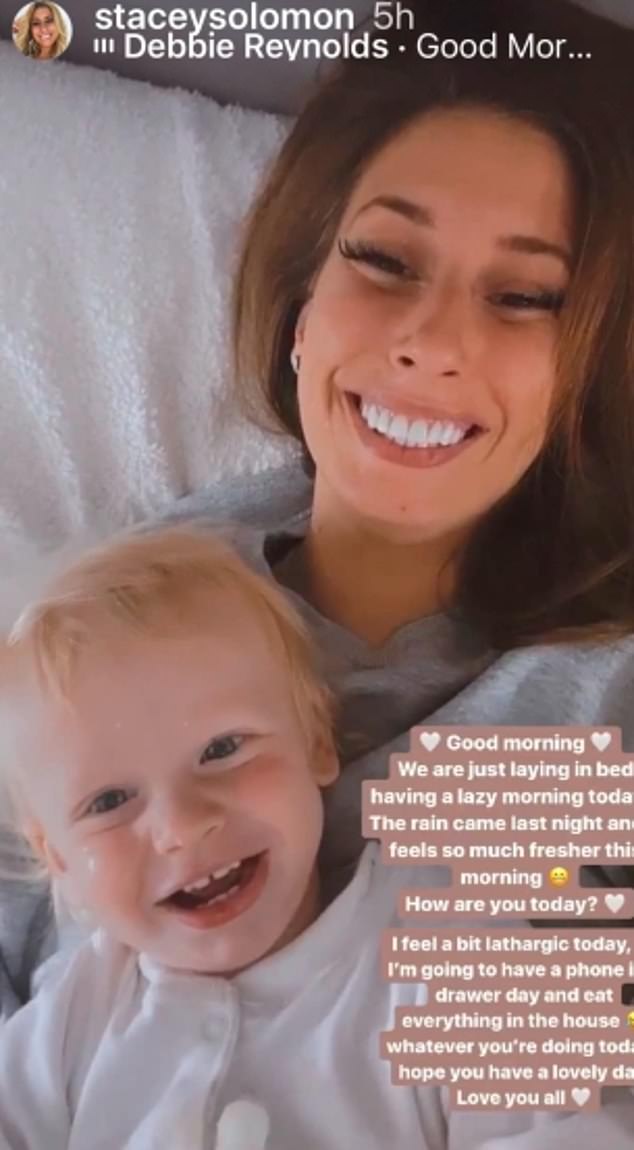 Day off: Stacey told her fans that she would be taking Saturday to relax with her family and ‘eat everything in the house’

These included ice cube moulds, a dust pan and brush and little blue pots and a selection of pretty jewellery – including ankle bracelets – from Primark.

Stacey appeared to be chuffed with her bargains and even joked about her new swimsuits possibly causing a ‘few pubic hair issues’.

It comes after the star and her actor boyfriend Joe Swash left fans in stitches with their bickering on Friday night’s episode of Gogglebox.

During the show the  former Eastenders star, 38, was left grumbling after Stacey’s beloved pooch Theo darted for a piece of pepperoni dropped from Joe’s pizza. 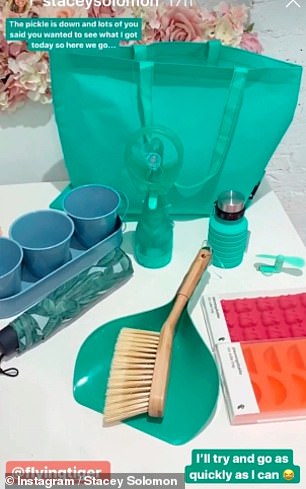 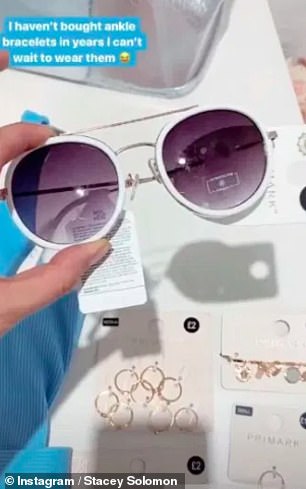 Bargain hunter: The mum-of-three also raided Tiger for some more pretty things (left) and got a fresh pair of white rimmed sunglasses (right) as well as a selection of jewellery 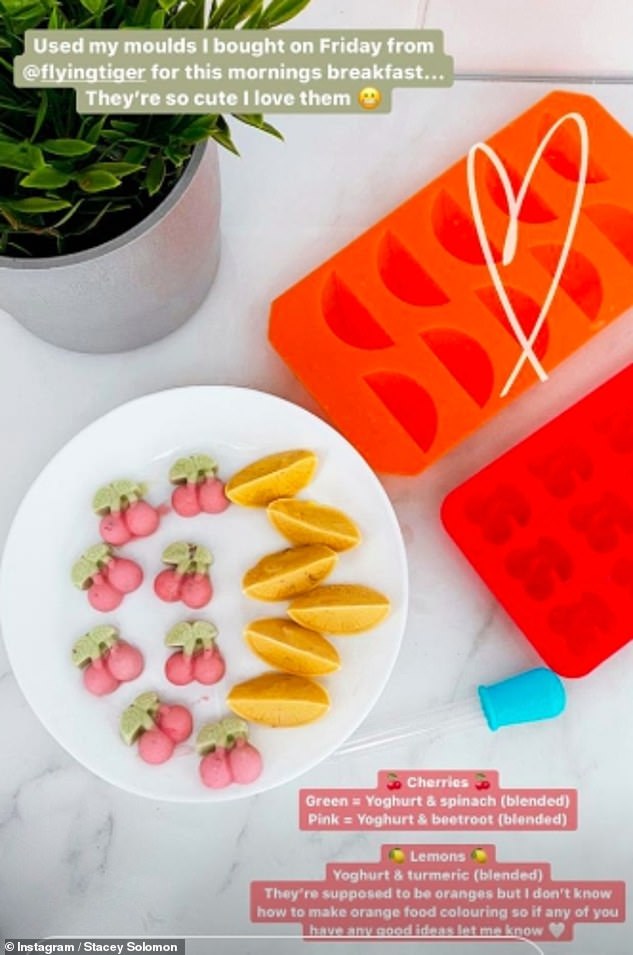 Tasty: Stacey wasted no time in putting her new buys to work, using the ice cube moulds to make some fruity breakfast treats on Sunday

As the duo settled down to watch clips from this week’s TV, they treated themselves to a takeaway and tucked into a pizza,

But as Joe enjoyed his Italian treat, a piece of meat fell from his pizza, causing little Theo to jump out of Stacey’s lap and in between poor Joe’s legs.

The I’m A Celebrity star was not impressed at the intrusion and snapped at his girlfriend, telling her to ‘get her off me!’

However, Stacey was clearly unsympathetic to Joe’s woes as she replied: ‘She wasn’t going for your ‘gooch’, trust me, no-one would want that. You dropped a peperami.’

As Joe complained that the pooch had a ‘good old bite of it’, an unfazed Stacey continued to munch on her own pizza. 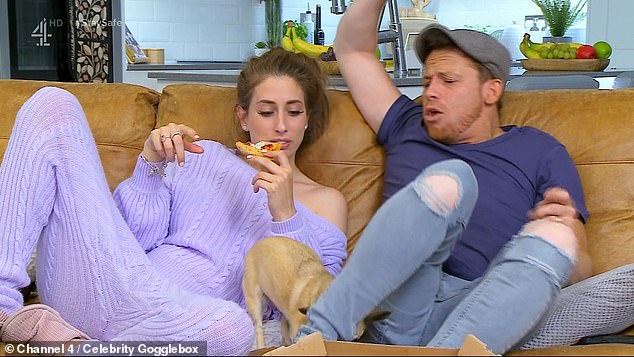 Ouch! Joe Swash was left cheesed off on the latest installment of Gogglebox on Friday as his girlfriend Stacey’s dog bit him ‘on the bum’

Barking at his former X Factor star girlfriend, Joe fumed: ‘You say things like it’s my fault! I drop something, your dog bites me. Course it’s my fault your dog just bit me on the bum!’

But the Loose Women favourite simply retorted: ‘She went for the meat, it is your fault.’

Joe and Stacey’s light-hearted on-screen arguments often leaves fans tickled and the latest installment of the Channel 4 show was no different.

Taking to Twitter, fans shared their joy at watching the couple on screen, with one writing: ‘I love Stacey and Joe. how funny are they.’ 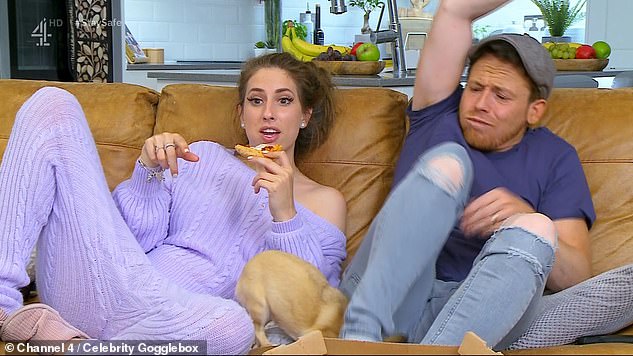 Whoops! But as Joe enjoyed his Italian treat, a piece of meat fell from his pizza, causing little Theo to jump out of Stacey’s lap and in between poor Joe’s legs