‘Hopefully he stays’: Stacey Solomon ‘adopts a wild cat’ at her new Essex pad after leaving her old pet behind

She moved into a sprawling rural pad in Essex earlier this month, which she now calls her ‘forever home’.

And Stacey Solomon revealed on Sunday that she has ‘adopted’ a ‘wild’ cat at her new property, after revealing she rehomed her former cat during the recent move.

The Loose Women panellist, 31, captured her new furry friend munching on pet food in their kitchen as her son Rex, 22 months, curiously watched. 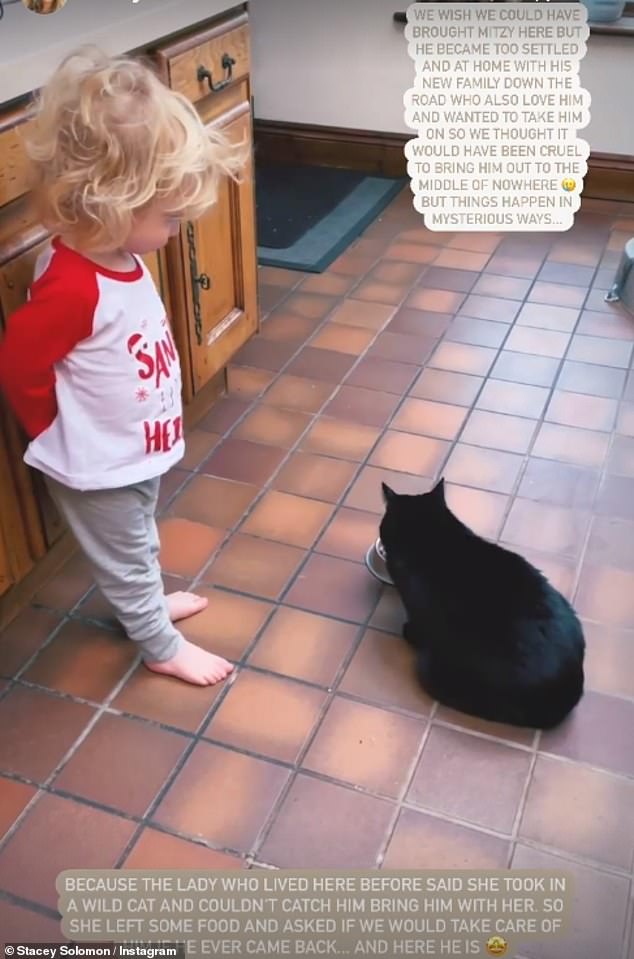 New addition: Stacey Solomon revealed on Sunday that she has ‘adopted’ a ‘wild’ cat at her new Essex pad, after revealing she rehomed her former cat during the recent move

She said alongside the clip on social media: ‘Because the lady who lived here before said she took in a wild cat and couldn’t catch him bring him with her, so she left some food and asked if we could take care of him if he ever came back… And here he is [starry eyed emoji].’ (sic)

Stacey then revealed why they decided to leave their old pet behind.

The mother-of-three continued: ‘We wish we could have brought Mitzy here but he became too settled and at home with his new family down the road who also love him and wanted to take him on so we thought it would have been cruel to bring him out to the middle of nowhere [crying face emoji]. 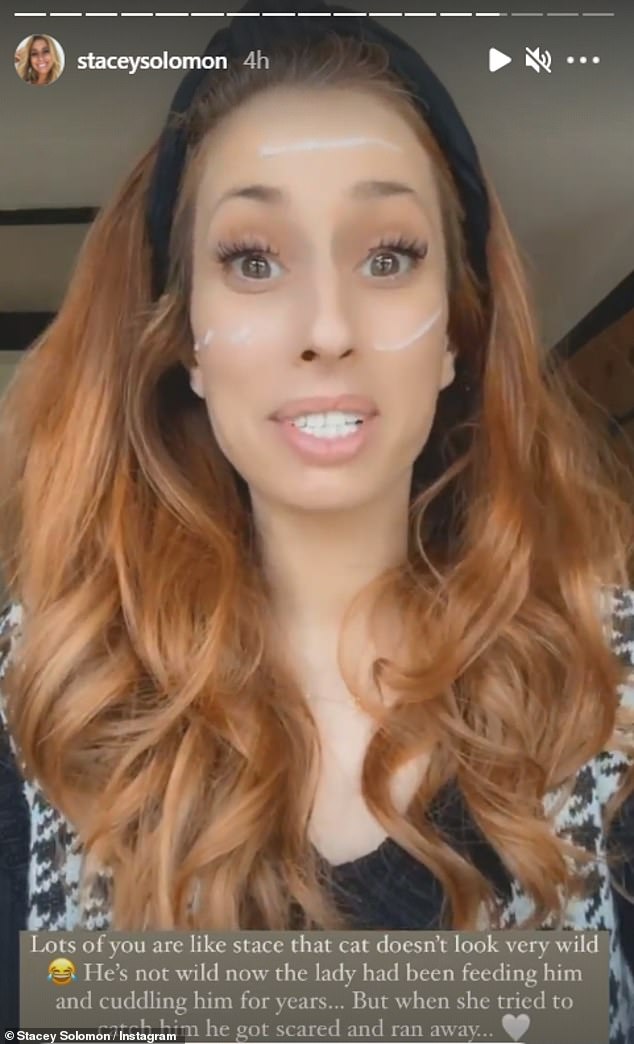 Sweet: The Loose Women panellist, 31, captured her new furry friend munching on pet food in their kitchen as she updated her Instagram followers

In an additional upload on her Instagram Story, Stacey stroked the black feline who welcomed the affection. Rex also seemed delighted with the new addition to their family.

Observant fans noticed the cat’s silky fur coat and plump shape, and questioned the TV personality as to whether it was actually ‘wild’.

‘Lots of you are like, “Stace’ that cat does not look wild, he looks very well fed,”‘ laughed Stacey as she applied skin care.

‘He’s not wild now, she’s [former homeowner] been feeding him for years, but he ran away when she tried to catch him to take him with her, so we’ve just been waiting for him to come back. 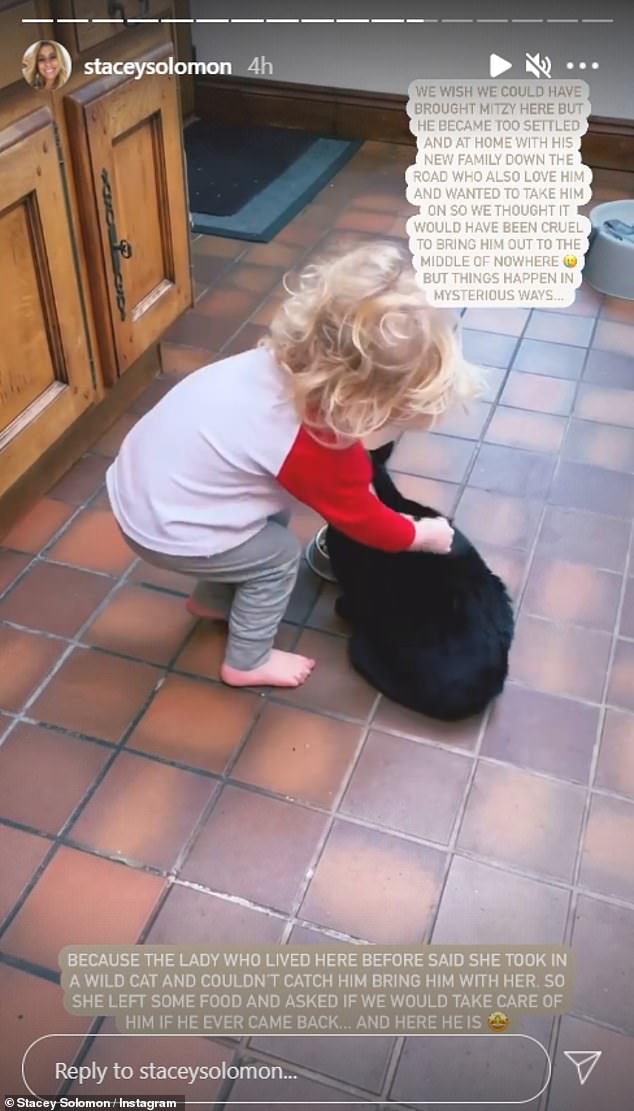 Tomcat: She penned a lengthy caption, revealing the former homeowner asked her to look after the cat while explaining her decision to leave their old pet behind 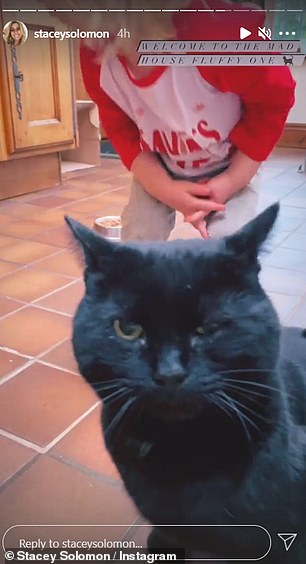 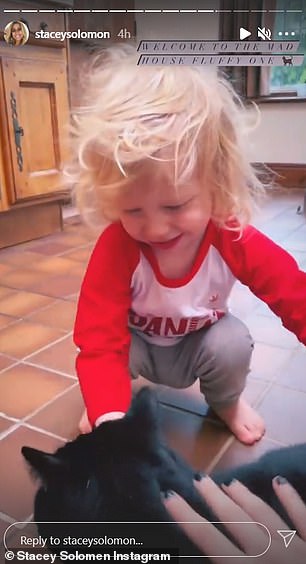 ‘Welcome to the mad house furry one’: In an additional upload on her Instagram Story, Stacey stroked the black feline who welcomed the affection

‘I’ve been putting food out every night and he’s definitely been eating it, unless that’s the foxes. But it was just so nice to see him at the house this morning.

‘He’s really friendly and lovely so hopefully he likes us and he stays!’

She added that he doesn’t mind the company of her dogs ‘too much’ as she hopes he continues coming back to the property.

Just one day prior, Stacey revealed her huge empty swimming pool as she began cleaning it, giving her social media followers a glimpse at her new household chores at the property.

The Loose Women presenter blasted the dirt away from the outdoor pool with the help of a jet wash, as she admitted it is a ‘massive job’ which will likely take days to complete. 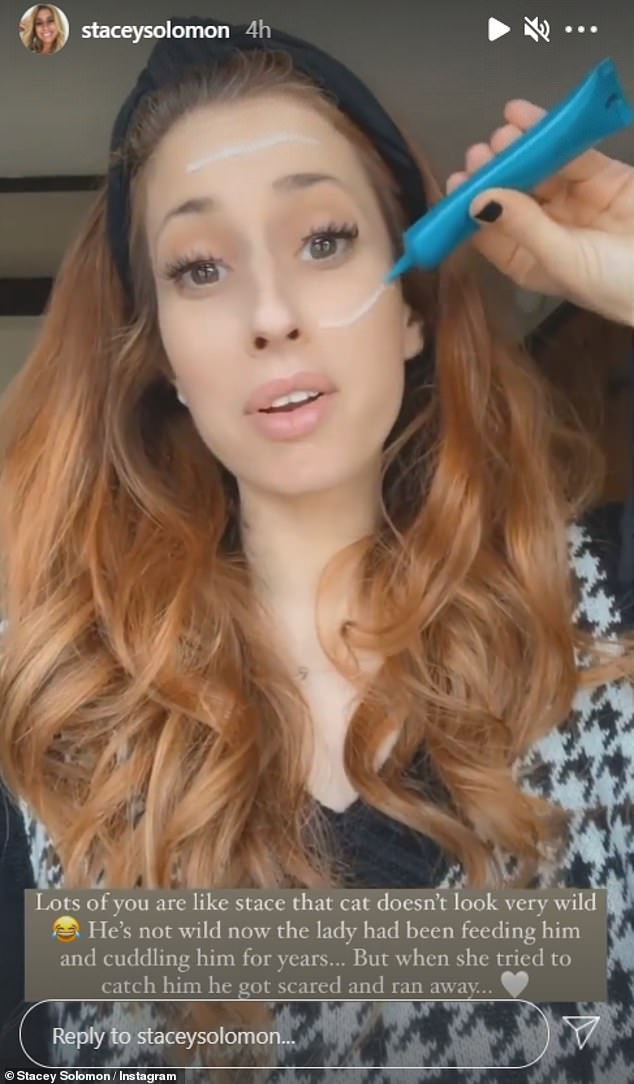 Multitasking: Observant fans noticed the cat’s silky fur coat and plump shape, and questioned whether it was actually ‘wild’, to which Stacey responded while applying skin care

As documented on her Instagram Story, her ‘pool guys’ lifted a green cover from the mucky pool as she said: ‘This is the first time I’ve seen inside [starry eyed emoji].’

Stacey subsequently sprayed the grime away, etching her name in the process and she added: ‘Can’t cope with this jet wash joy.’

Providing a third and final update, the mother-of-three smiled while standing in the empty pool and penned: ‘So the @poolguyml will need to clean this properly with chemicals, fill it and then test all the pipes.

‘But he let me have some fun with my jet wash first…’ alongside a laughing emoji.

The TV presenter wrapped up in a pink padded jacket and tied her chestnut tresses up in a relaxed bun as she continued: ‘This is a massive job so it’ll take a few days but I am SO excited for the tap to tidy [crying laughing face emoji and monkey face emoji]’. 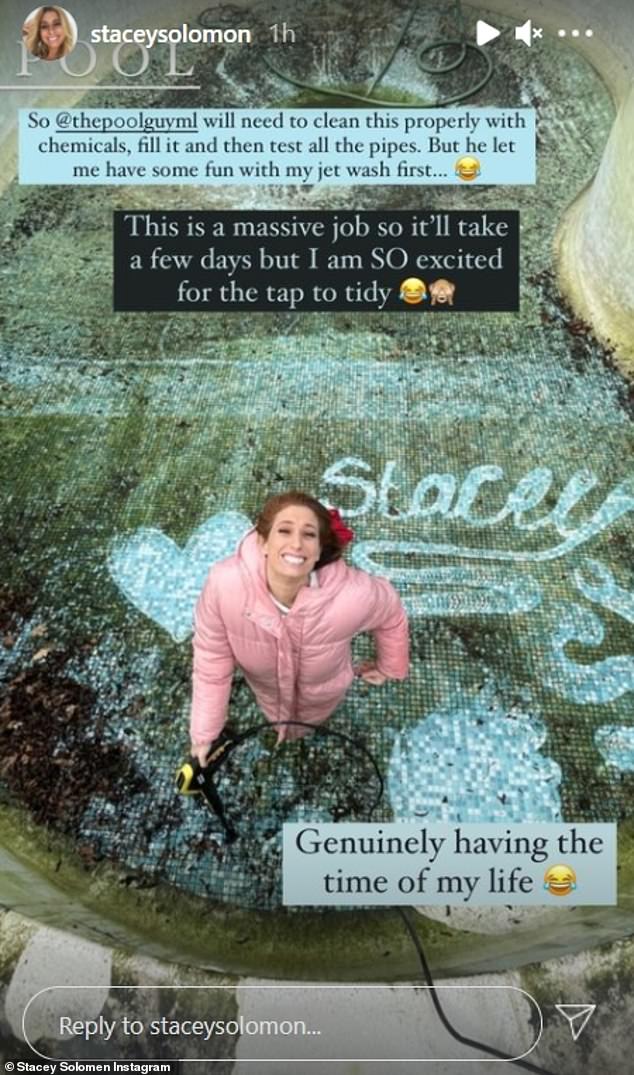 Wow: Just one day prior, she revealed her huge empty swimming pool as she began cleaning it, giving her social media followers a glimpse at her new household chores at the property

‘Genuinely having the time of my life,’ (sic) Stacey concluded with another laughing crying emoji.

She recently moved into the Essex pad, with her partner Joe Swash, 39, and her three sons Zachary, 13, and Leighton, eight, and Rex.

On Friday, Stacey fought back tears as she discussed moving into her ‘forever home’ on Loose Women.

Reflecting on the decision to move house, Stacey admitted even she can’t believe how far she’s come from being a teen mum, after giving birth to her son Zachary when she was just 17.

In her first appearance on the panel since moving she admitted it was a last-minute decision by herself and Joe to buy the house and move in with her children.

She said: ‘We always thought we’d love to move away from London and find somewhere we could afford that had more greenery.

‘A house came up and it cost as much as it would cost the same as our house to sell and we thought should we go for it, and things happened really quickly and fell into place and actually we rushed in there because we exchanged and completed super quick.

‘We all feel like we’re in an Airbnb and someone is going to come in and say you have to check out tomorrow.’ 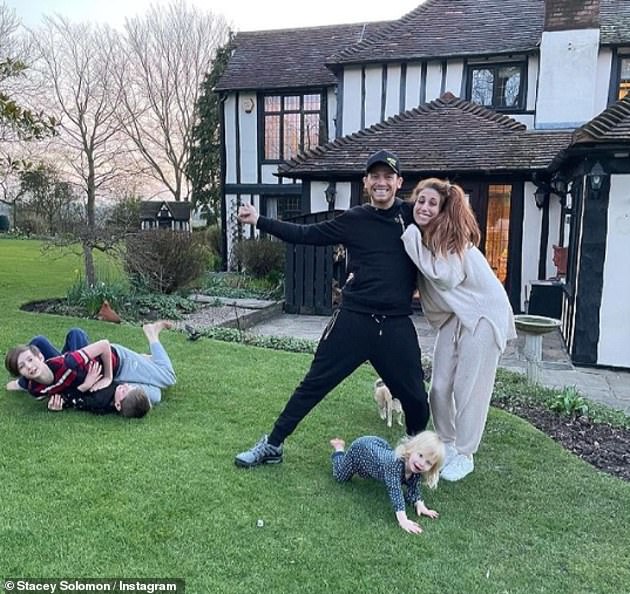 Fresh start: The Loose Women panellist recently moved into the Essex pad with fiancé Joe Swash, 39, and her three sons Zachary, 13, and Leighton, eight, and Rex