Sophie Turner PICTURE EXCLUSIVE: Newlywed looks incredible in bridal white swimsuit as she and Joe Jonas celebrate their honeymoon with jet ski rides and by relaxing on yacht in Italy

They tied the knot for a second time on June 29 and Sophie Turner and Joe Jonas appeared to be having a whale of a time on their honeymoon on Sunday.

The couple were pictured relaxing on a Valletta super yacht and racing one another on jet skis as they spent time together in Positano in Italy, with Sophie looking incredible in a bridal white swimsuit.

Before heading to Italy, the couple enjoyed a sunshine break in The Maldives, where they shared pictures from their idyllic destination on social media.

Sophie Turner PICTURE EXCLUSIVE: Newlywed looked incredible in bridal white swimsuit as she and Joe Jonas celebrated their honeymoon with jet ski rides and by relaxing on yacht in Positano, Italy

Going, going, gone: Joe showed off his sense of adventure as he jumped off the boat and into the water

Sophie, 23, was pictured showing off her adventurous sense of spirit as she larked around with Camp Rock star Joe, 29, in the sunshine.

The couple spent their day on their lavish yacht out in the sea and had fun as they dived into the Italian waters with Joe going shirtless and wearing patterned swimming shorts.

Joe looked determined to keep himself in trim with a series of exercise routines and after a thrill-seeking speedboat ride, the couple kicked back and chilled out to enjoy some PDA with a few kisses and cuddles. 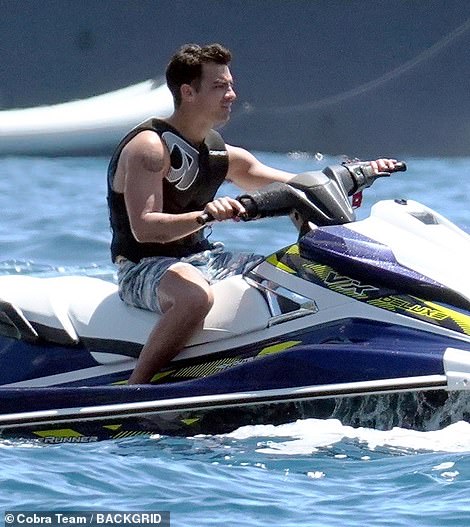 A need for speed: Sophie and her love proved they have similar interests as they zipped across the water on jet skis Wow thing: Sophie showed off her natural beauty as she enjoyed a moment of reflection

Flawless: Sophie looked incredible from every angle as she enjoyed her adventurous day in the sunshine 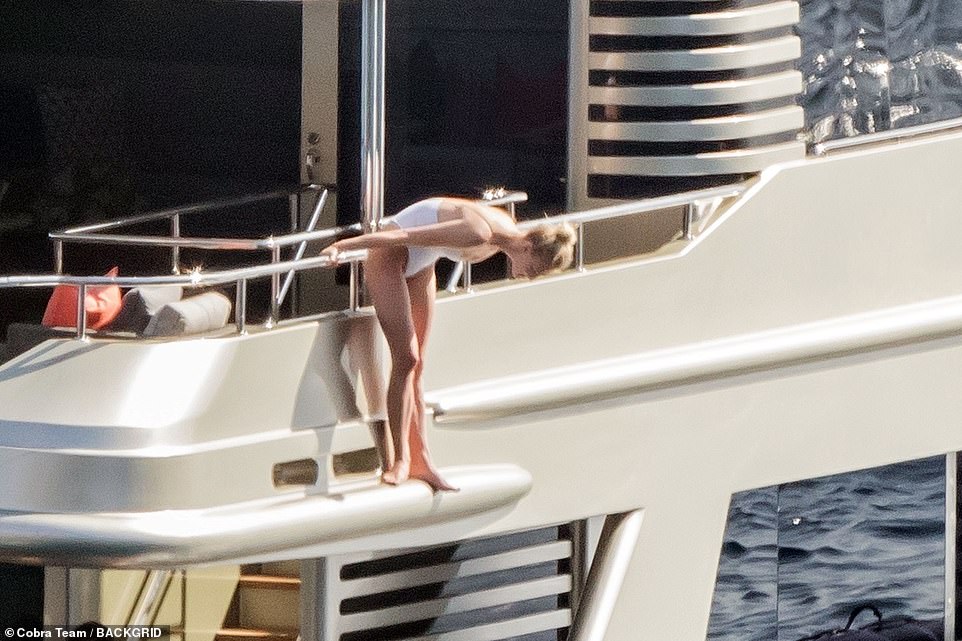 Be careful: Sophie leaned over the edge as she assessed whether or not to join Joe in the water 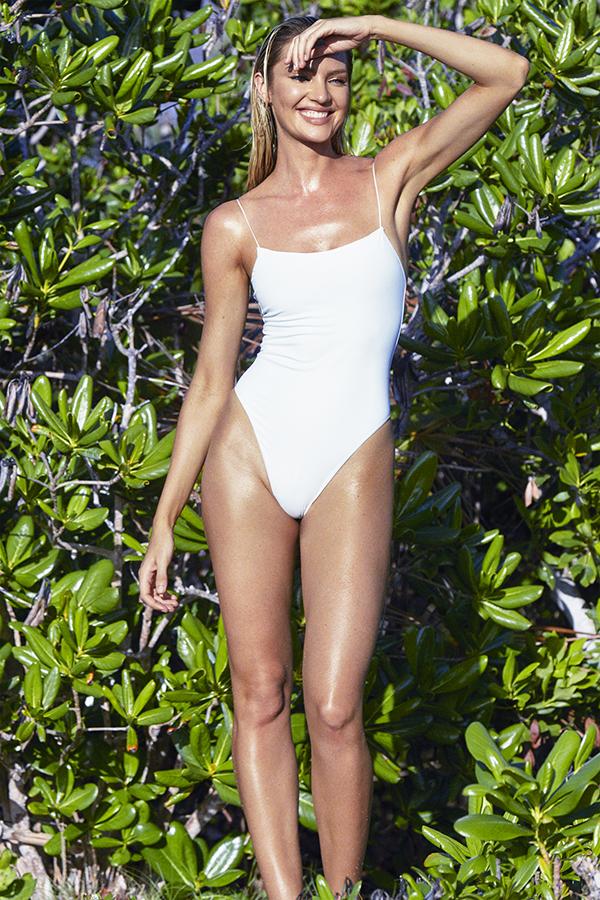 DJ Joe in the house: The singer and actor later put in a little workout session as he lifted some weights while listening to some tunes 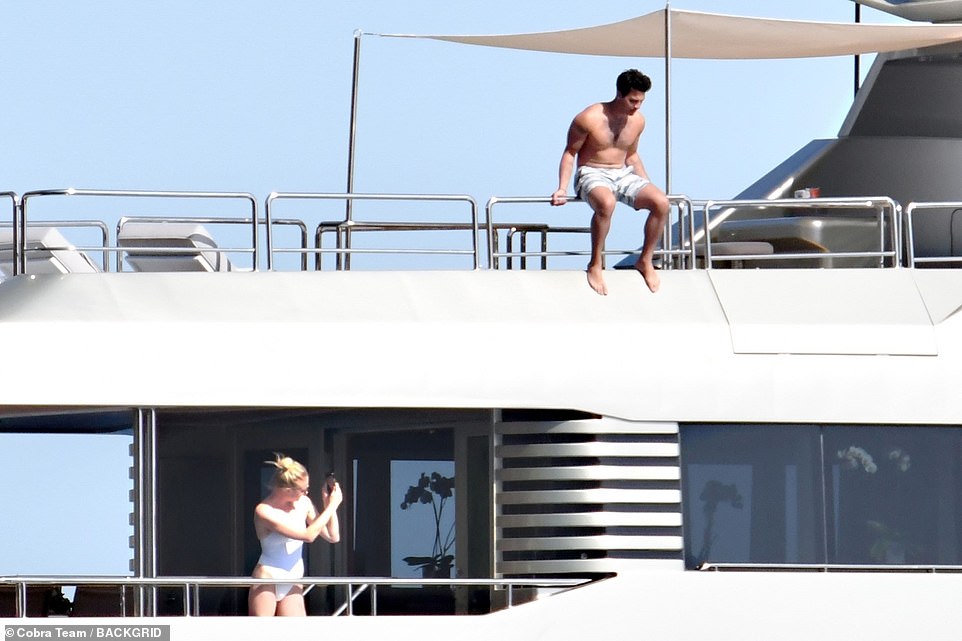 Get this for Instagram: Sophie made sure to capture Joe on her phone as he prepared to jump into the water

Before this trip, the couple were quick to make fans jealous, as they posted various photos and videos from their $28,101 a night (before taxes and fees), Soneva Fushi, resort.

According to the Soneva Fushi’s website, the couple’s $28,101 a night private reserve features nine bedrooms and can fit 20 people.

The 60,000 square feet property even sports a gym, children’s room, spa, sauna and a private pool attached to the master bedroom. 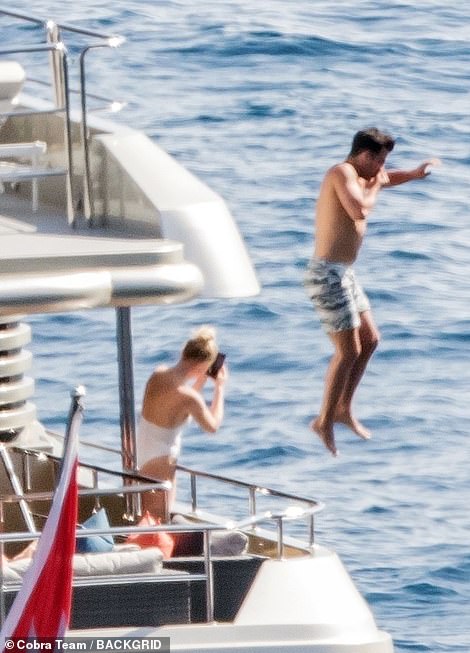 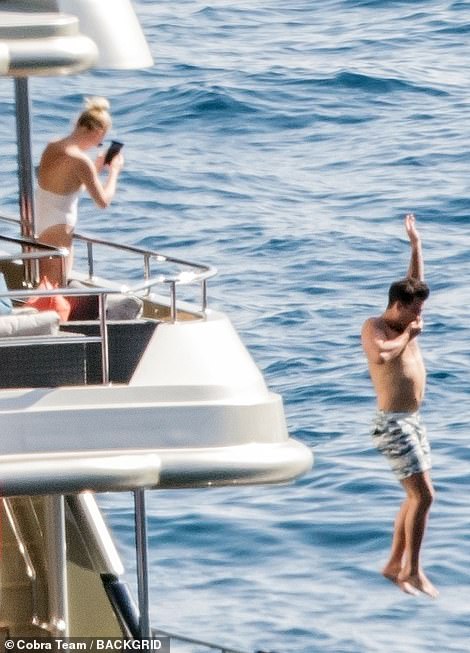 They’re just like us: Sophie made sure she captured Joe as he fearless jumped right in 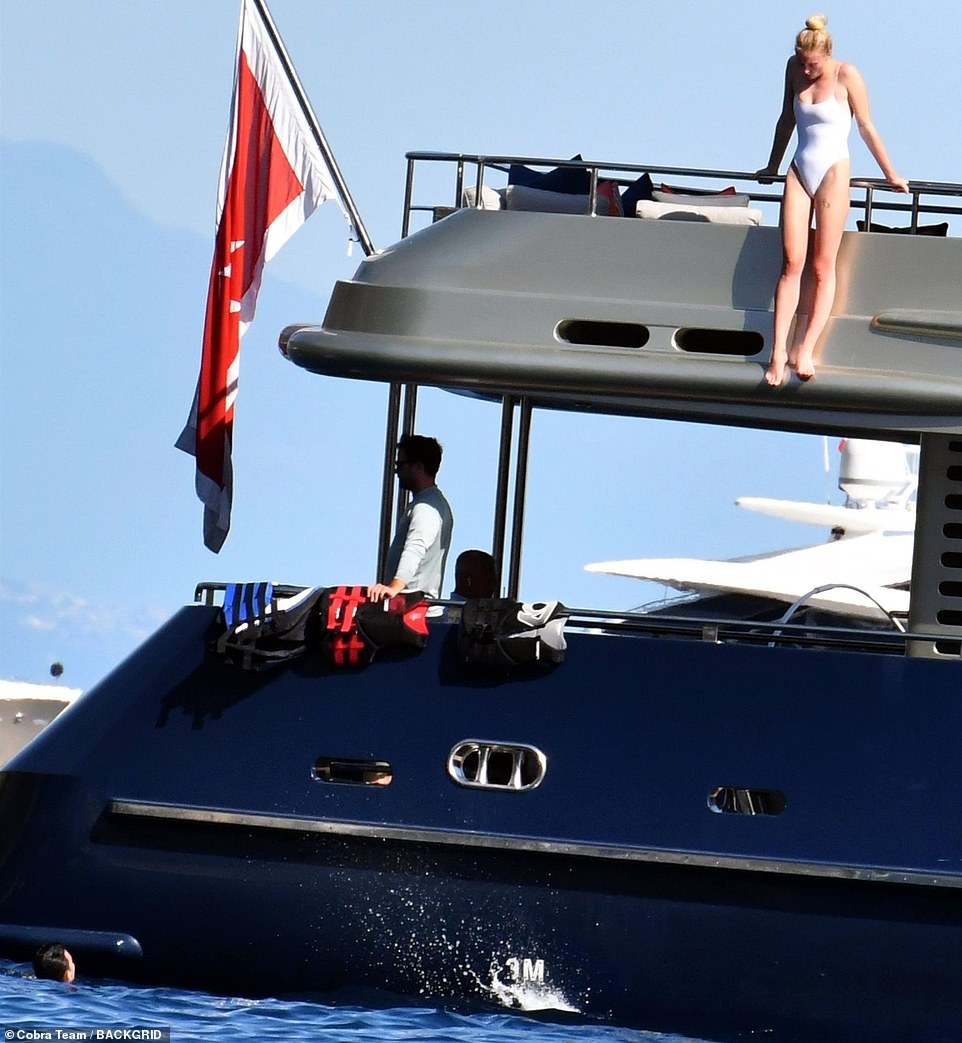 Don’t look down: As soon as Joe jumped in, his wife was quick to follow him into the water 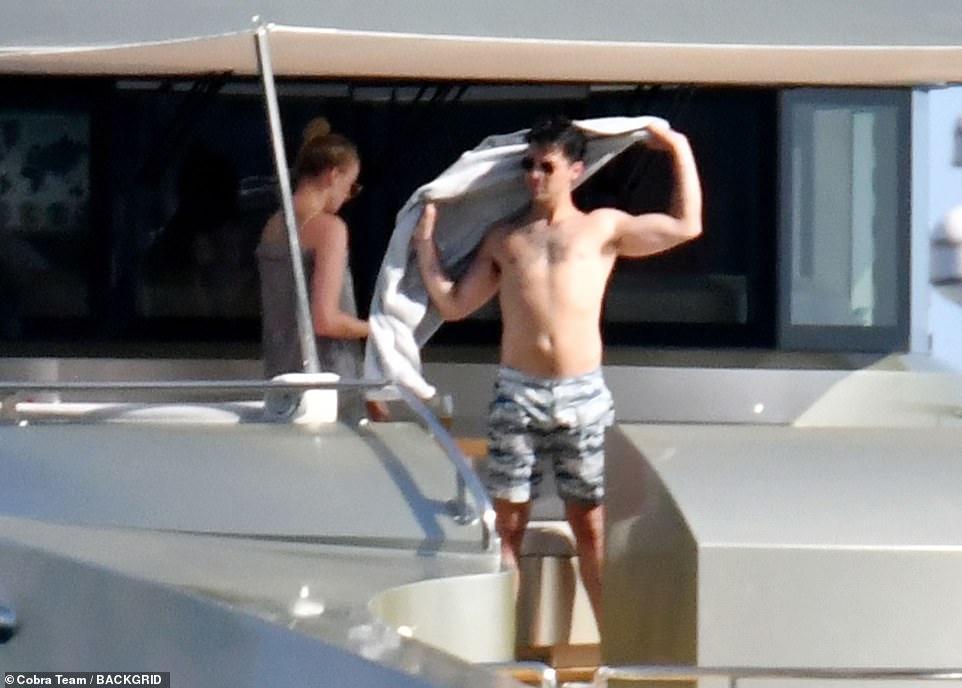 Drying off: The couple wrapped themselves up in fluffy towels as they stood on the lower deck 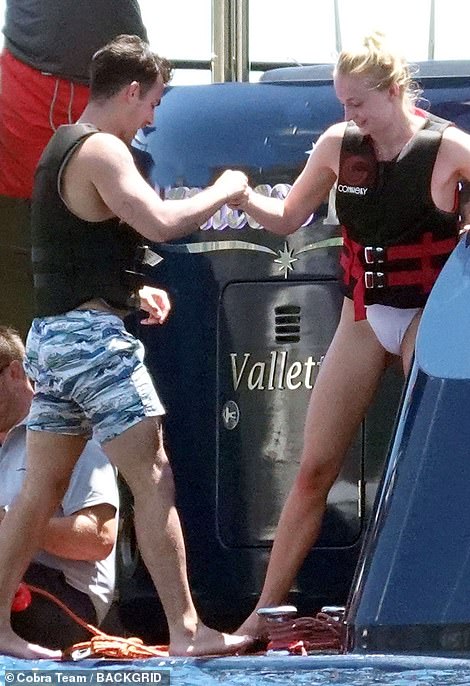 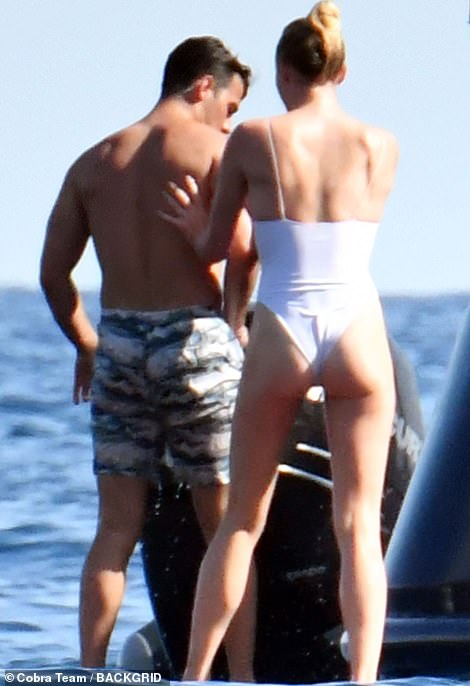 Do you take this woman? Ever the gent Joe took Sophie’s hand as he helped her off the boat 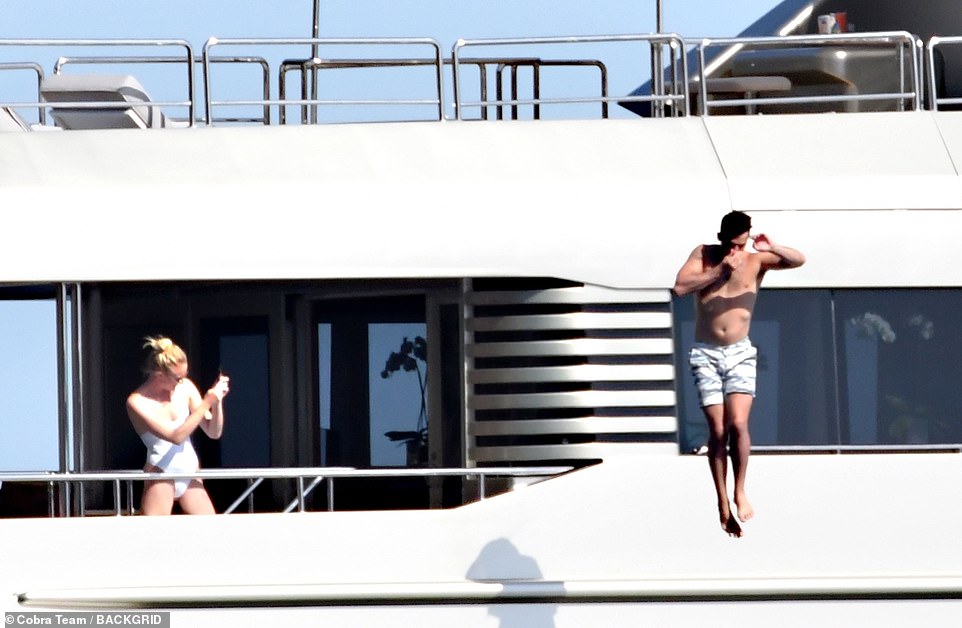 She’s going to send this to Maisie Williams: Sophie was keen to capture memories with her man

Hanging on for dear life: Sophie looked a little nervous as she prepared to disembark from the boat

The cheapest room to rent on the island is a one-bedroom villa suite with a pool for $2,000 a night – before taxes and fees.

Sophie and Joe said their second ‘I do’s’ at lavish Château du Martinet in the South of France in a sunset ceremony.

The wedding marks their first official ceremony after getting married in Las Vegas after the Billboard Music Awards in May.

Sophie and Joe have been together since late 2016; the pair met through mutual friends and kicked things off by DMing each other. They got engaged in 2017, a year after their first date.

Sophie later told Harper’s Bazaar: ‘We had a lot of mutual friends and they’d been trying to introduce us for a long time. 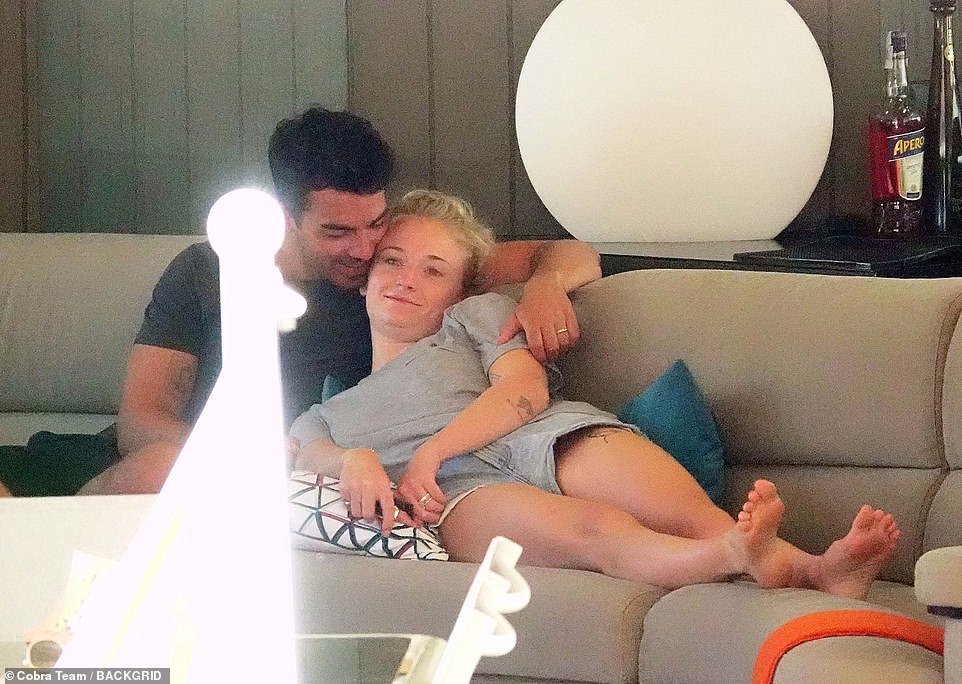 Living their best lives: The couple appeared blissfully happy as they cosied up together on one of the sofas 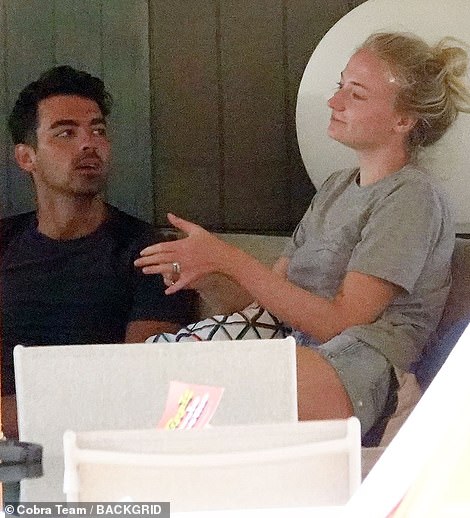 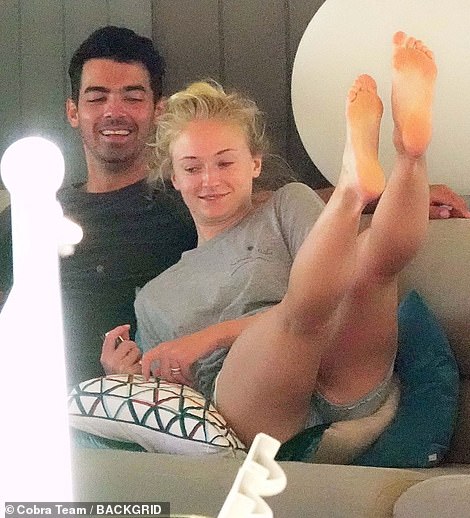 In love: The couple gazed at one another as they enjoyed a break from the sunshine 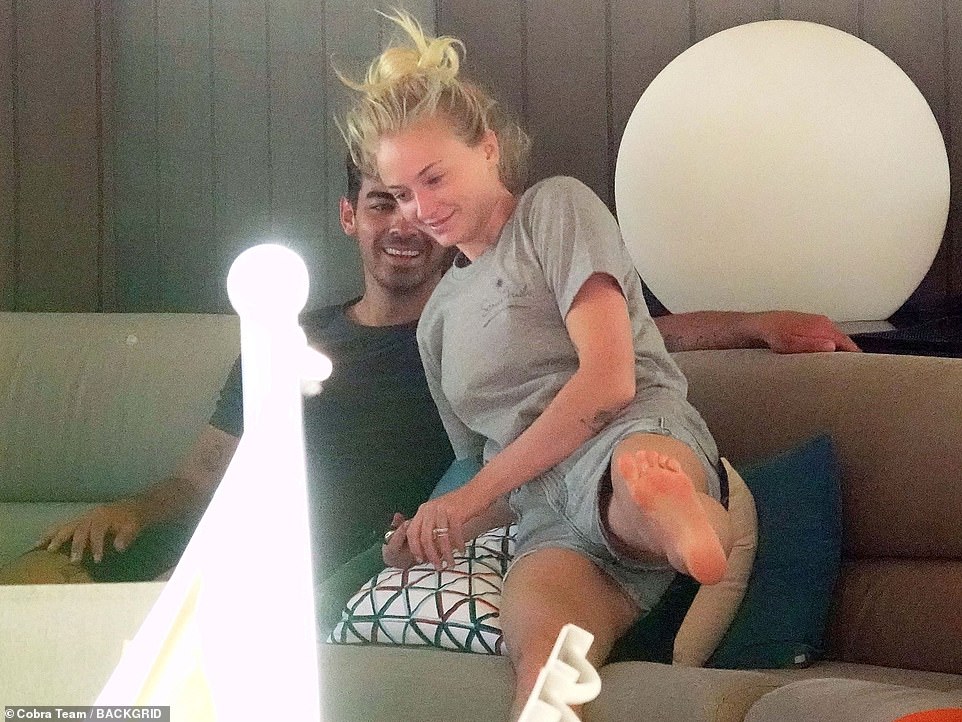 Messy hair don’t care: Sophie looked perfectly at ease with her new husband as they relaxed together 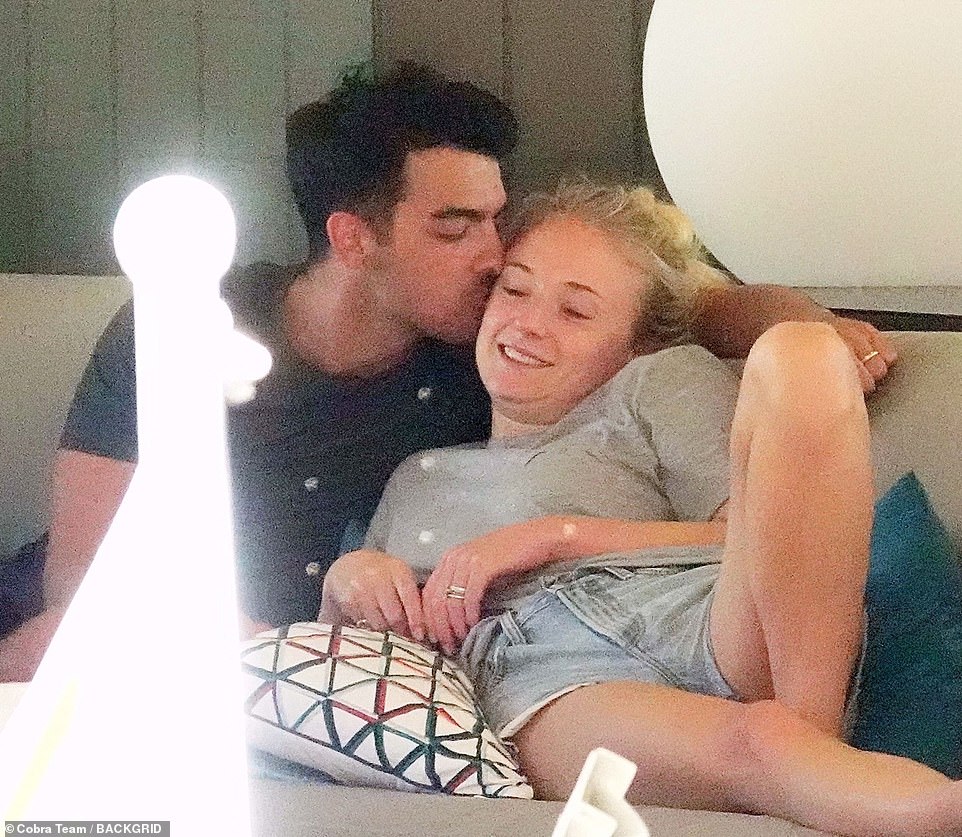 Tender moment: Joe planted a sweet kiss on his bride as they relaxed together

‘We were following each other on Instagram and he direct messaged me one fine day, out of the blue.’

Rumours that they were an item first swirled when they were seen cosying up at the MTV EMAs in November 2016, pictured on several occasions afterwards at various other events.

The pair then made it ‘Insta-official’ in January 2017, when Sophie shared a snap of Joe smoking a cigar on a boat in Miami. 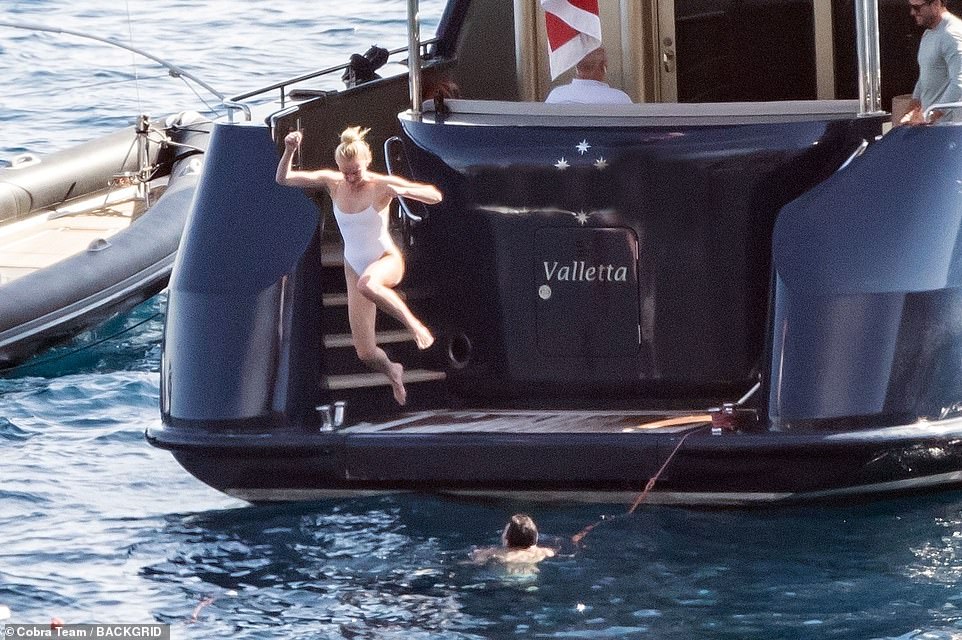 Not afraid of anything: Sophie gave another almighty leap into the water as her new husband looked on 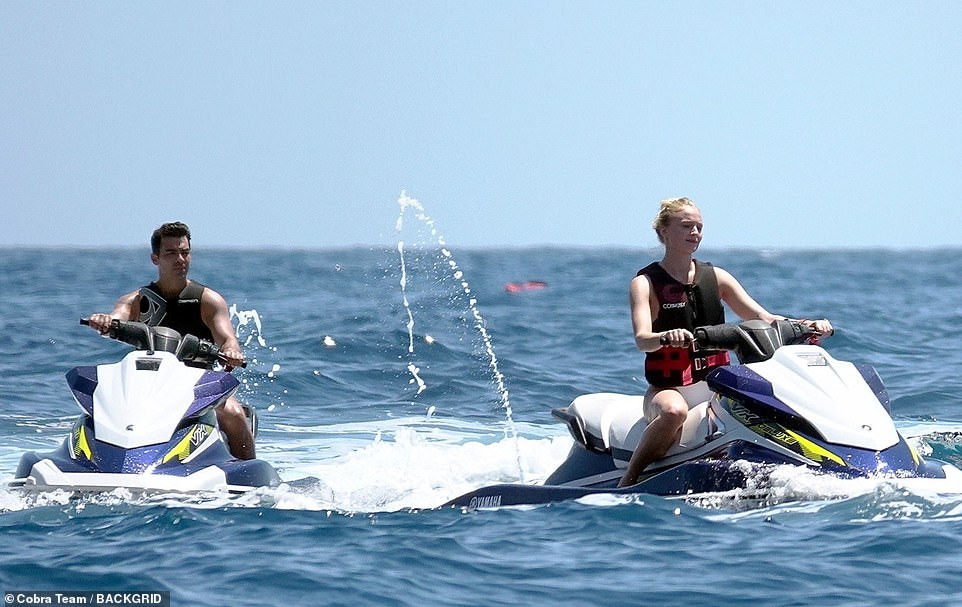 He’s a sucker for her: Joe let Sophie lead the way as they traversed across the water 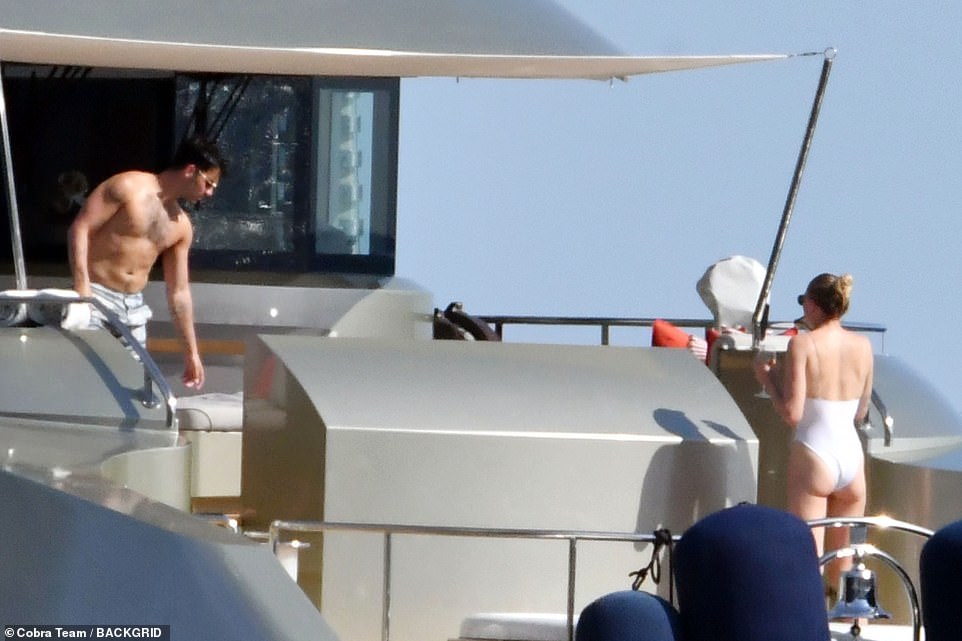 Time to relax: Sophie had what looked like a glass of wine in hand as she looked up at her shirtless hunk 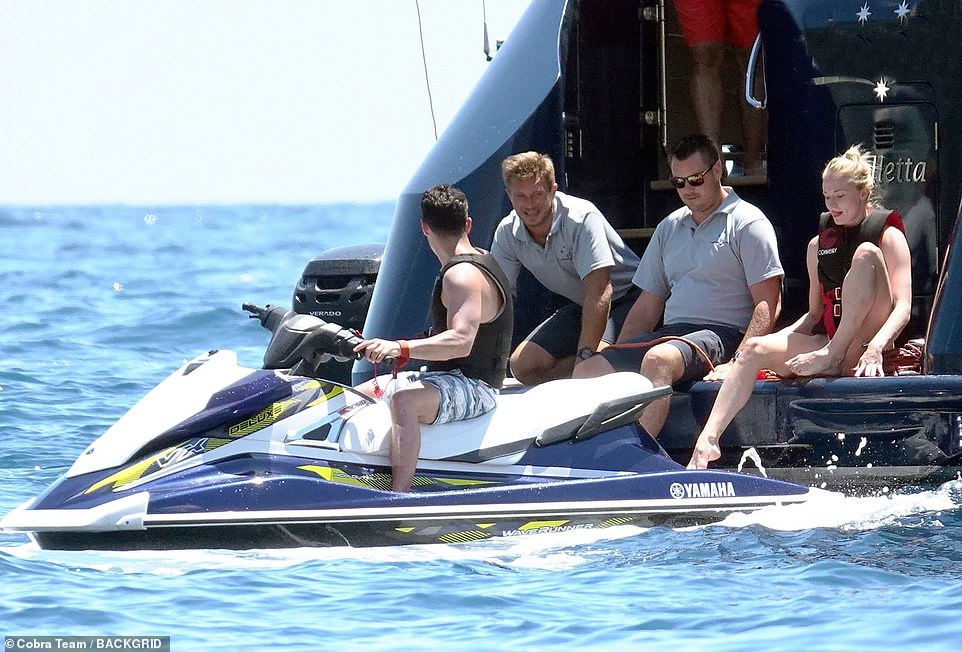 Loving life: She had a cheeky expression of her face as she dipped her toe into the water 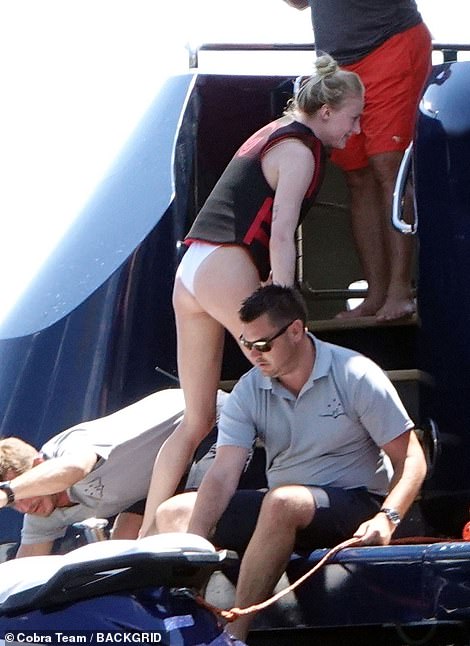 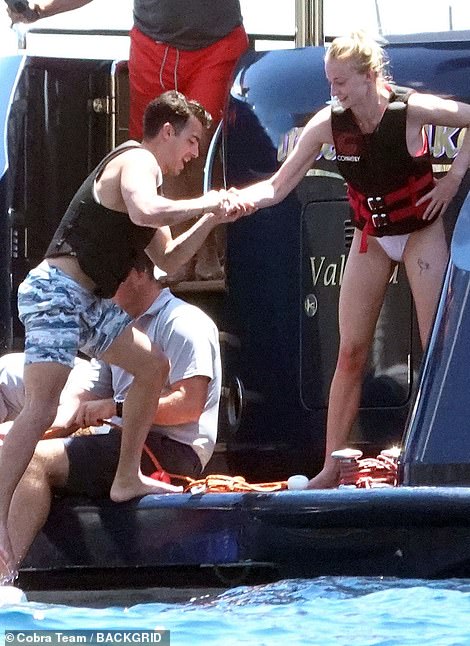 Happy: Sophie had a big smile on her face as she stepped off the jet ski with a little assistance Straight in: Joe washed the water out of his eyes while Sophie stood on the edge of the boat