Sienna Miller, 40, appears smitten as her model beau Oli Green, 25, plants a kiss on her hand while enjoying a date to watch the New York Knicks beat the Detroit Pistons

Sienna Miller appeared to be in high spirits on Friday as she enjoyed an NBA basketball game with her boyfriend Oli Green in New York.

The actress, 40, couldn’t contain her smiles as her model beau, who is 15 years her junior, planted a sweet kiss on her hand.

Watching the at-home New York Knicks beat the visiting Detroit Pistons, the pair were in the zone as they happily took the game in, chatting and laughing. 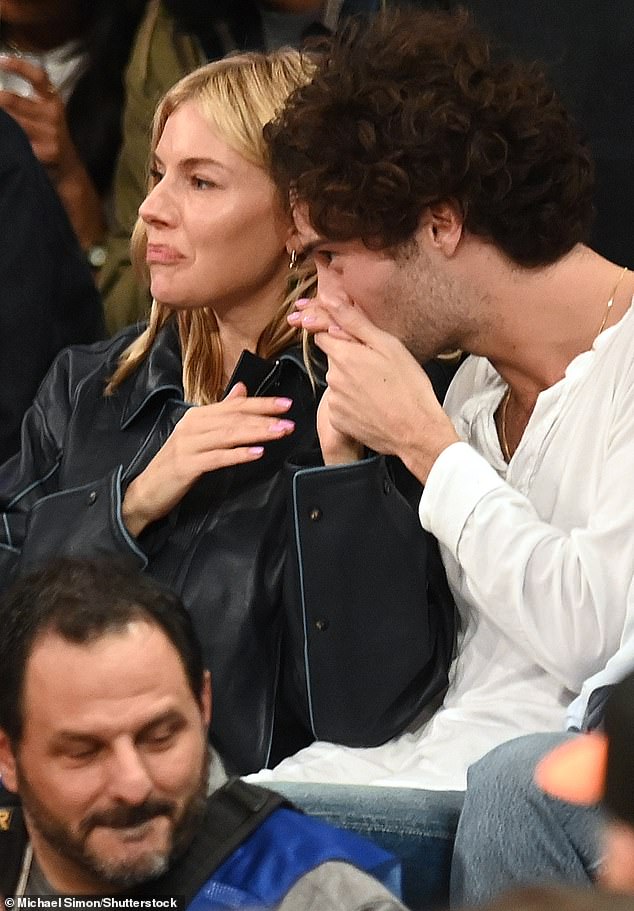 Smitten: Sienna Miller, 40, appeared smitten as her model beau Oli Green, 25, planted a kiss on her hand while enjoying a date to watch the New York Knicks beat the Detroit Pistons

Sienna sported a black leather jacket with a white thread lining and button detail, layered over a quarter button-up T-shirt.

Her golden blonde locks were left to fall freely in a tousled style, sitting behind her ear as she kept her youthful complexion lightly enhanced.

Sitting alongside her, Oli donned a pair of mid-wash jeans and a plain white long-sleeved T-shirt – keeping his dark locks in a tousled curl. 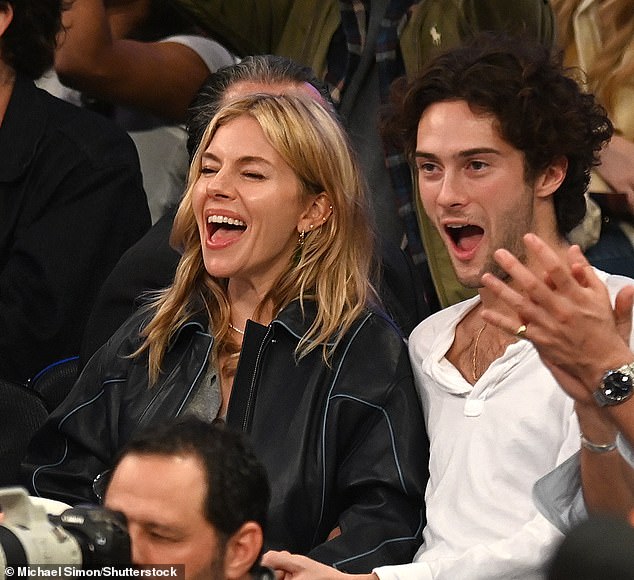 High spritied: Watching the at-home New York Knicks beat the visiting Detroit Pistons, the pair were in the zone as they happily took the game in, chatting and laughing 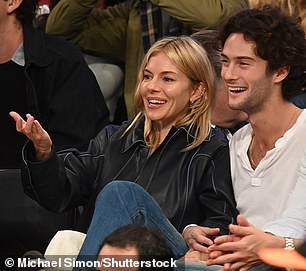 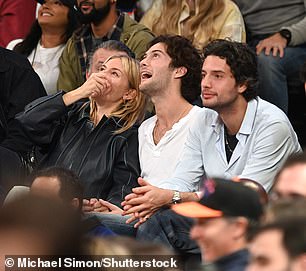 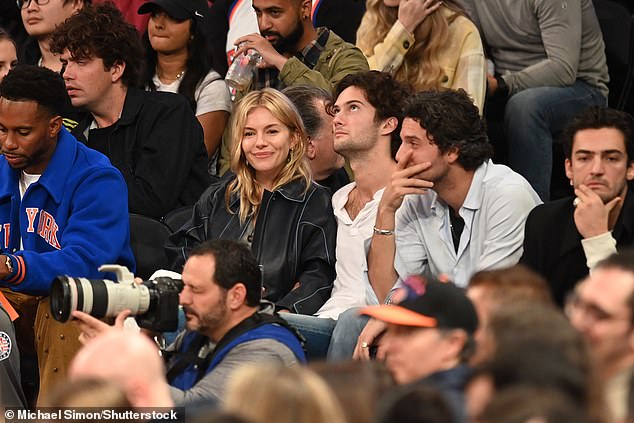 Comfortable: The pair sat amongst the crowd for the game, which saw at-home team New York Knicks take the win

The pair sat close to each other, falling into stitches of laughter as they happily watched the game.

New York native Sienna was animated while taking in the game, covering her mouth at some points before pointing out to the court.

She enjoyed some ice cream while watching the tense game too, which saw the New York Knicks finish with 121 points while the Detroit Pistons closely followed with 112. 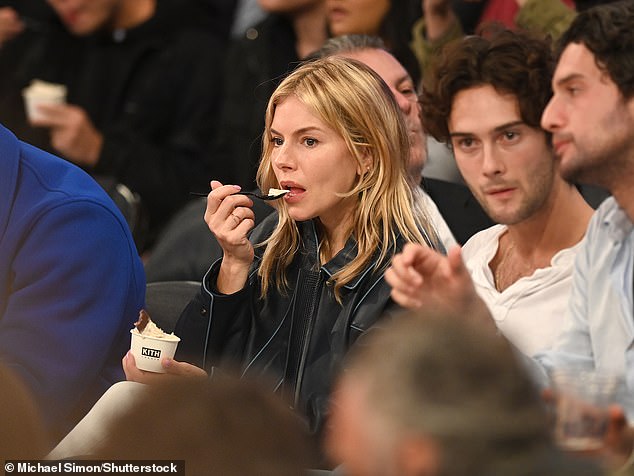 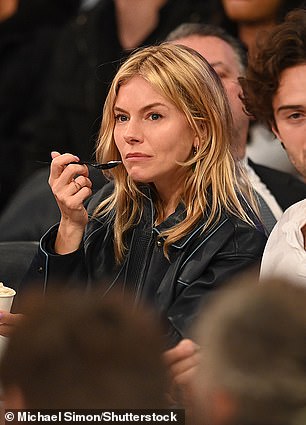 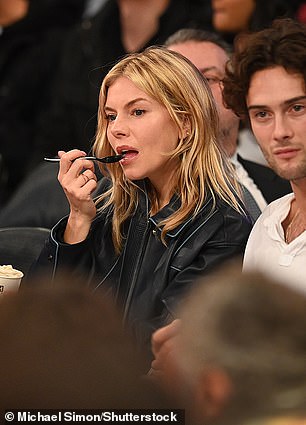 Beauty: Her golden blonde locks were left to fall freely in a tousled style, sitting behind her ears 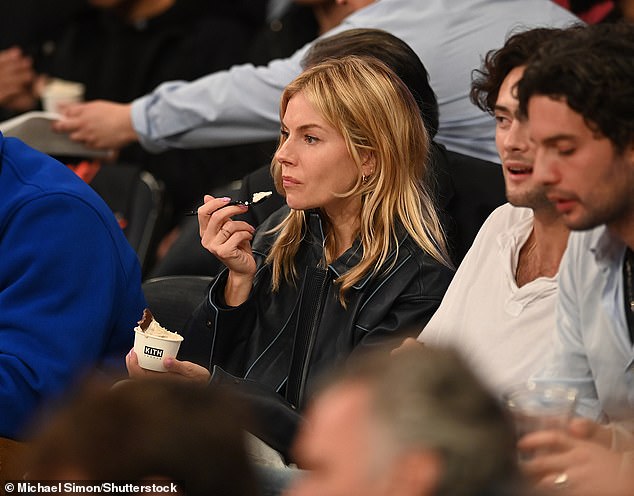 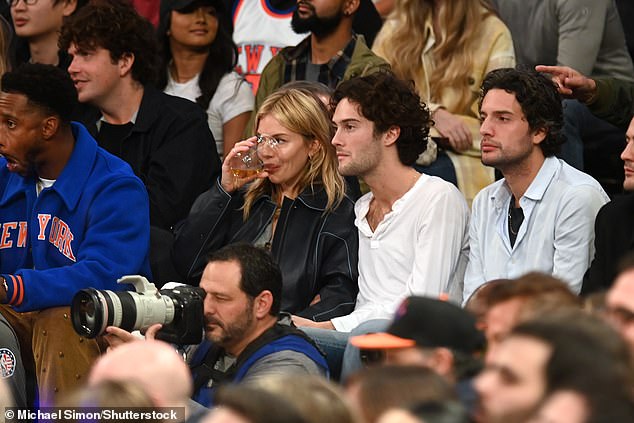 Refreshing: They enjoyed some more drinks and refreshments watching the game

Sienna and Oli sat alongside former American football player Victor Cruz, who was firmly in the Knicks’ camp with a branded.

DJ Tiesto was also in attendance to watch the game with wife Annika Backes Verwest, as the pair looked ultra chic together.

While actress Sofia Hublitz looked stunning for the sporting event as she was clad in a black Knicks jacket – smiling for some courtside snaps.

Stars such as Chuck Zit, Jerry Ferrara and his wife Breanne Racano were also in attendance to watch the event. 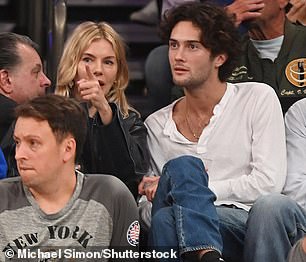 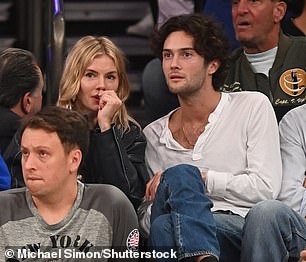 Casual: Sitting alongside his girlfriend, Oli donned a pair of mid-wash jeans and a plain white long-sleeved T-shirt 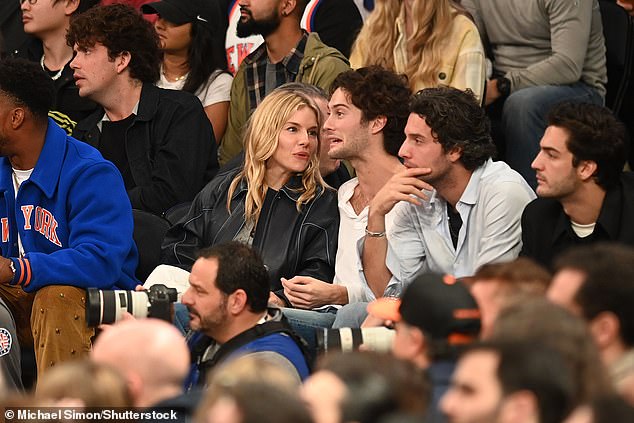 Dashing: The model kept his dark locks in a tousled curl and T-shirt unbottoned 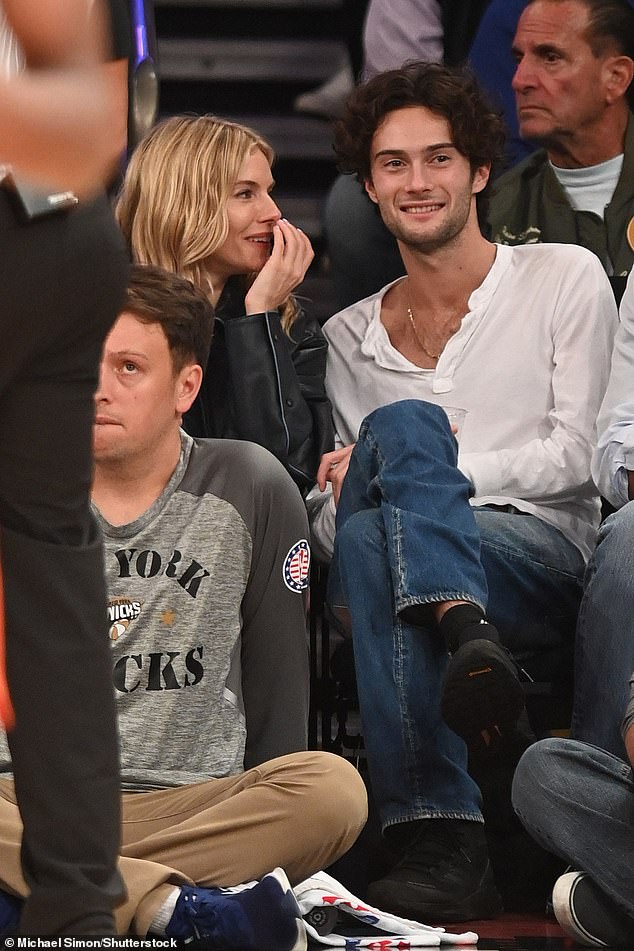 Smitten: Sienna couldn’t contain her giggles as she sweetly looked over to Oli 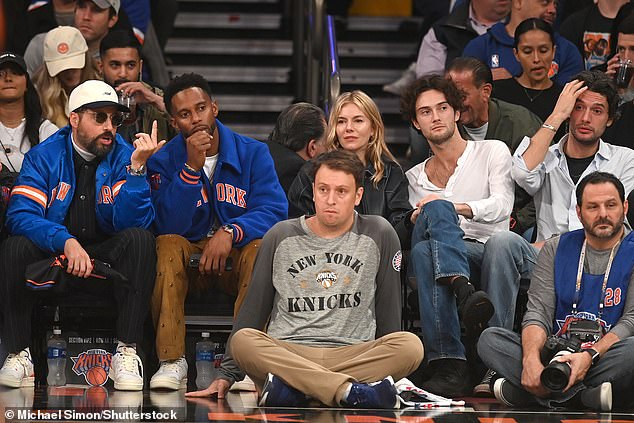 Fans: The pair sat alongside former football player Victor Cruz, who was clad in a blue and orange New York Knicks jacket 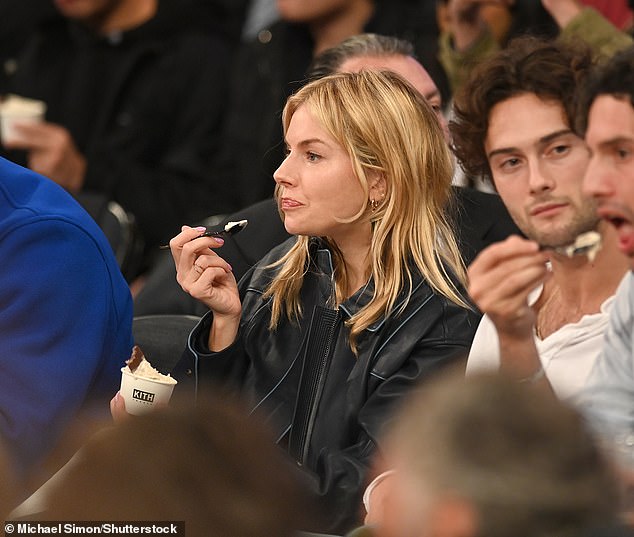 Together: The date comes as the pair have been dating since the beginning of this year, making a slew of sweet public appearances 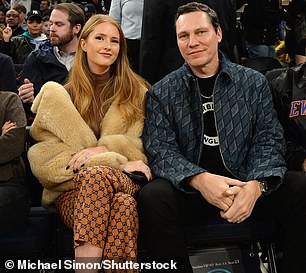 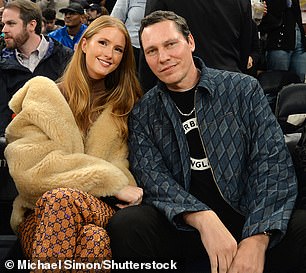 Glamour couple: DJ Tiesto and his wife Annika Backes Verwest  were also in attendace to the game, looking ultra-chic as the latter was clad in a faux fur jacket

Sienna and Oli have been dating since February, making a slew of sweet appearances together since as they took their relationship public.

It comes after Sienna recently said she spent years investing in a relationship with someone who was ‘a bucket with a hole in it of a person’.

The actress revealed she thought she would be married with children by her 30s but the relationships she was in during those years didn’t work out.

Speaking to British Vogue, Sienna said: ‘I’d invested what felt like the important years in something that was just a bucket with a hole in it of a person. I wasted time. And I felt like time was really my currency.’

She was quick to point out she was not referring to Tom Sturridge, who she dated from 2011 to 2015 and shares daughter Marlowe, ten, with. 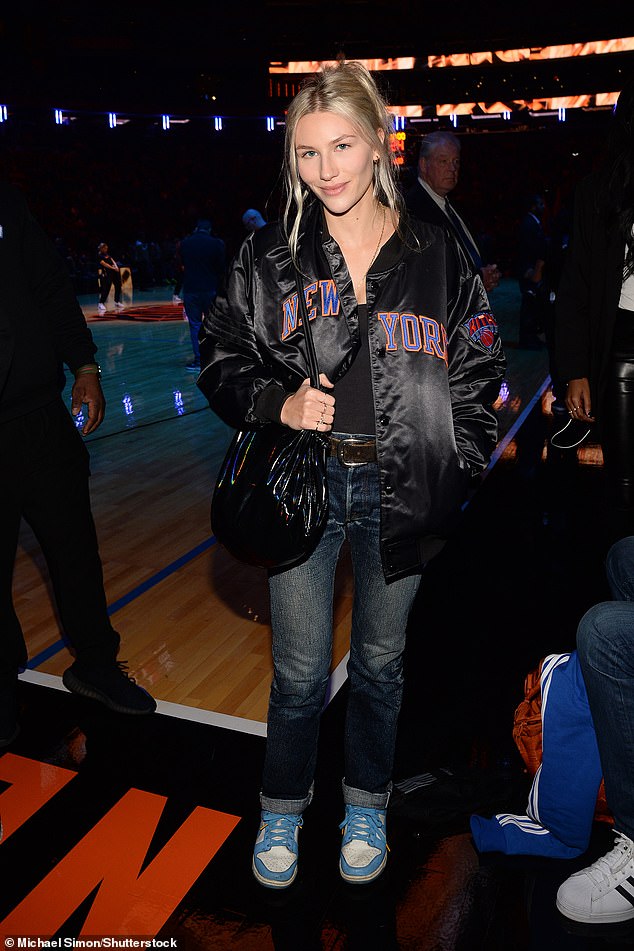 Fan? Actress Sofia Hublitz looked stunning for the sporting event as she was clad in a black Knicks jacket – smiling for some courtside snaps

Off duty: The blonde kept a low-key look with a pair of dark wash jeans and a light blue pair of Nike Dunk trainers 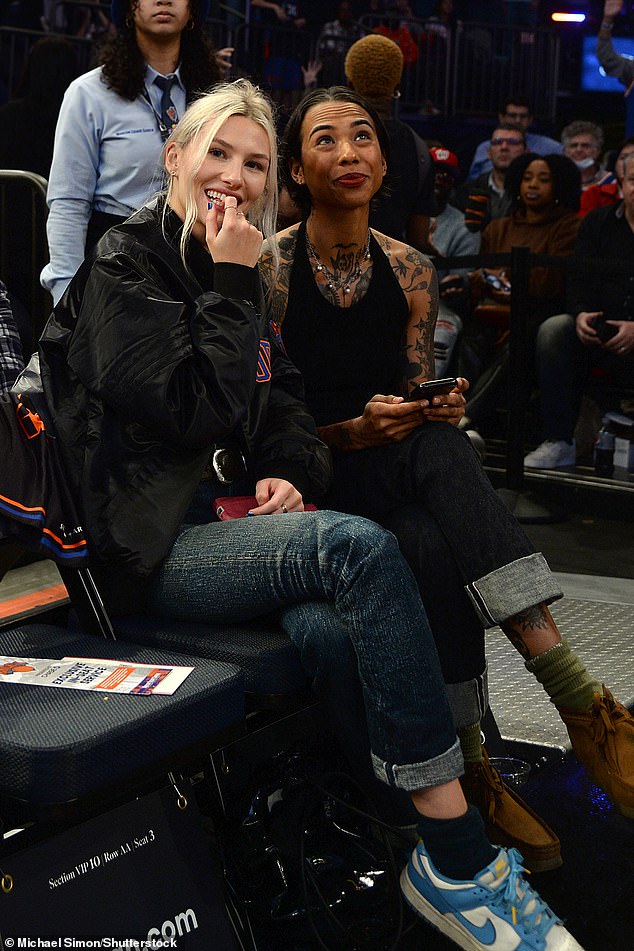 Best seats: She flashed a smile at the cameras while sitting courtside, with her locks bundled into a tousled do’

But the pair proved that they were on friendly terms recently, as they partied at this year’s Glastonbury festival this summer with their respective partners – Oli and Alexa chung.

Prior to her relationship with Tom, Sienna was engaged to fellow actor Jude Law in 2004 after he popped the question on Christmas Day.

He apologised to her in July of the following year for having an affair with the nanny of his children.

Sienna also had a highly publicised affair with the actor Bathlazar Getty in 2008.

Reflecting on her thirties being difficult, she added: ‘There was a lot of anxiety. Relationships hadn’t worked out – I imagined that I would be married with three kids, being a great mum. I love being a mother. It’s what I do best.’ 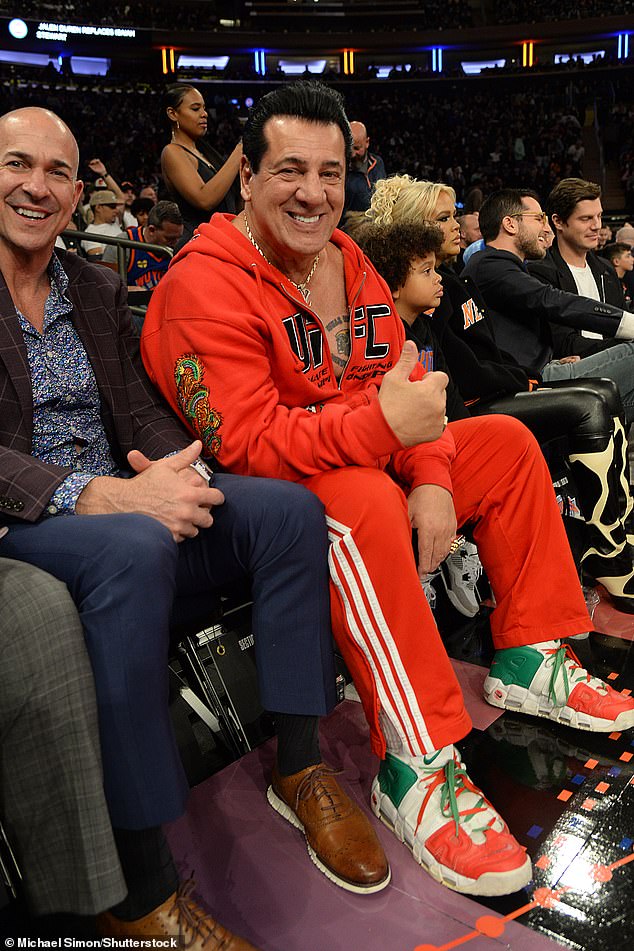 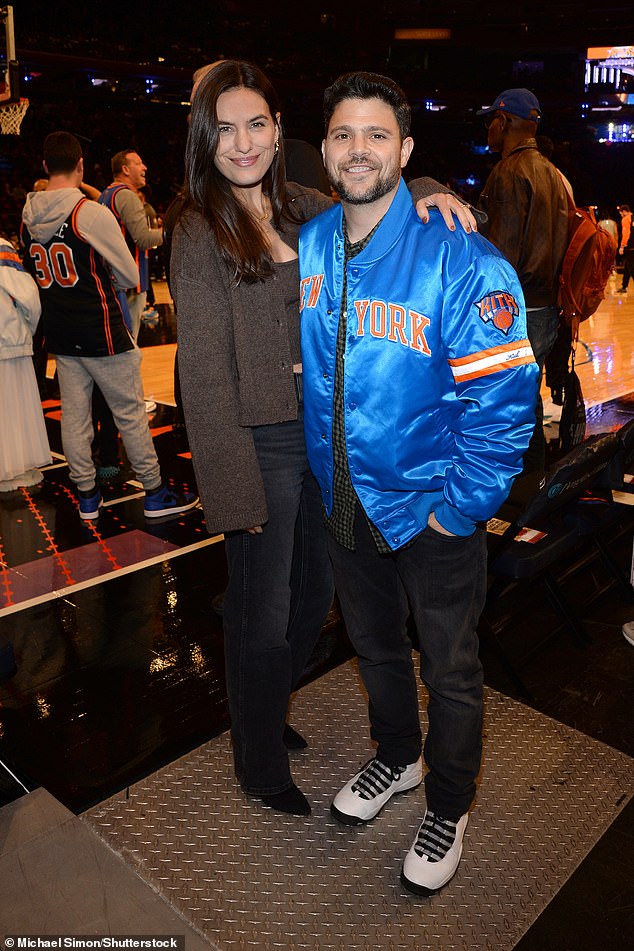 Date night all around: While Jerry Ferrara and Breanne Racano also beamed at the game, with the latter wrapping an arm around her husband