Sheridan Smith goes retro with victory rolls and a red lip while singing Vera Lynn classics at D-Day celebrations in Portsmouth… as The Queen, Donald Trump and war veterans watch on

Sheridan Smith honoured war veterans on Wednesday with a dazzling performance at the D-Day celebrations in Portsmouth.

Taking to the stage, she was belting out the legendary songs of World War II icon Vera Lynn as she was watched by The Queen, Theresa May, Donald Trump, Emmanuel Macron and Angela Merkel to mark the momentous day.

The 37-year-old Gavin And Stacey star was sure to give a nod to the era with her victory roll hairstyle, red lipstick and wiggle dress as she belted out the songs. 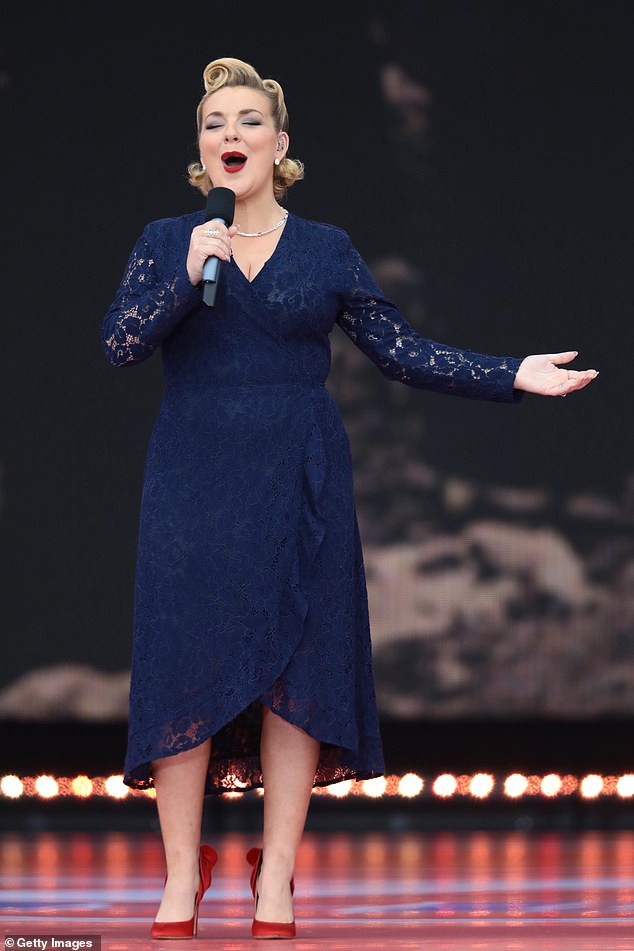 Sheridan looked stunning as she took to the stage wearing a blue lace wrap dress with burnt orange shoes with giant bows at the back.

The political heads of sixteen countries involved in World War II joined Her Majesty were in attendance.

During the event, he shared a joke with the Queen and the stage with the other world leaders. 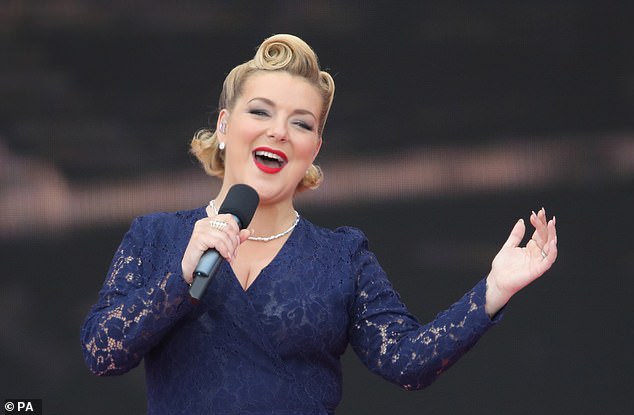 Paying tribute to the heroes: Sheridan looked stunning as she took to the stage wearing a blue lace wrap dress with burnt orange shoes with giant bows at the back 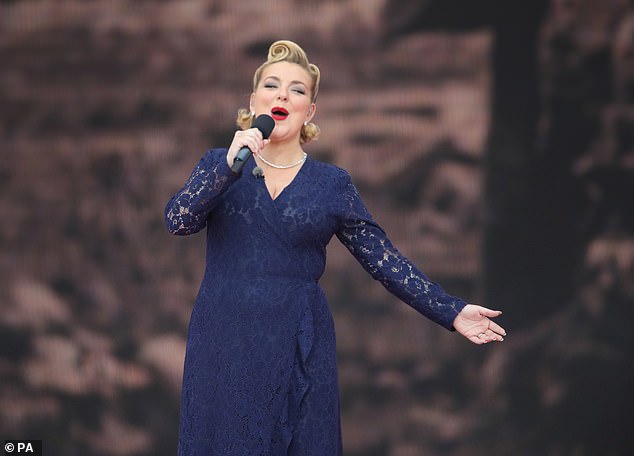 Memories: 300 heroes who survived the invasion of France in 1944 were guests of honour and a group stood and saluted the thousands who made the ultimate sacrifice fighting Hitler’s Germany

300 heroes who survived the invasion of France in 1944 were guests of honour and a group stood and saluted the thousands who made the ultimate sacrifice fighting Hitler’s Germany.

Trump, who was accompanied by First Lady Melania, sat next to the Queen and Prince Charles.

They smiled and chatted surrounded by the leaders of all the Allied nations who took part in Operation Overlord – the codename for D-Day. 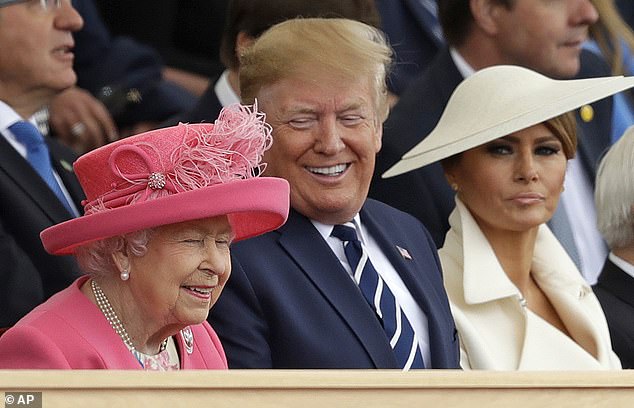 Audience: President Trump shared a joke with the Queen at the start of the event, having had a state banquet thrown in his honour at Buckingham Palace this week 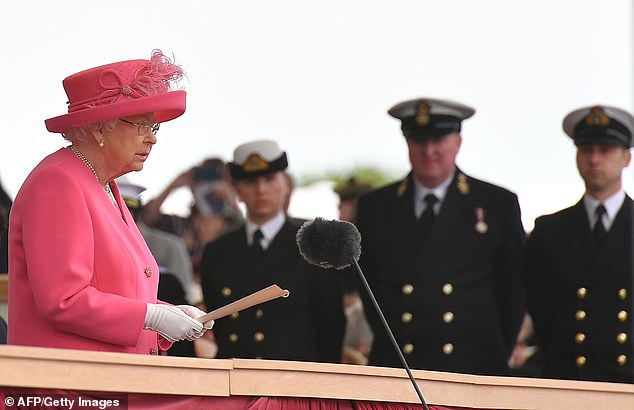 Her Royal Highness: In a highly personal speech the Queen mentioned her father George VI  and paid tribute to the ‘resilient wartime generation’ – she called ‘my generation’ – thanking them for freeing the world 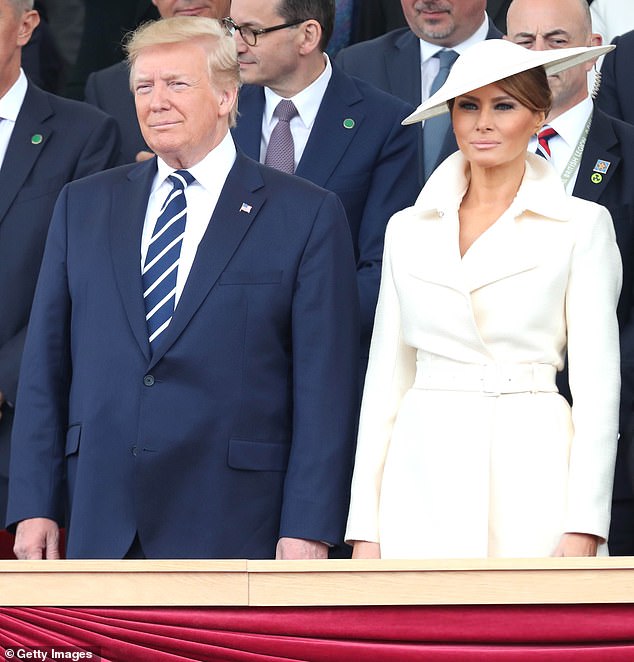 Paying tribute: The Trumps were on the front row for the event attended by 14 world leaders and hundreds of veterans in Hampshire 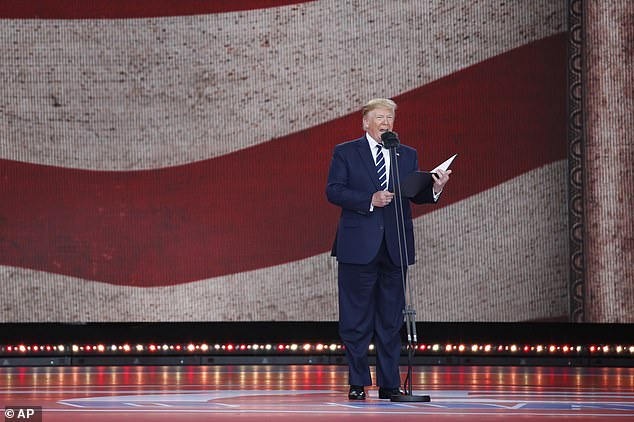 Memorable: President Trump read an excerpt of Franklin D. Roosevelt’s D-Day prayer, which he read to the nation on the night of June 6, 1944

In a nationwide radio message on the evening of June 6, 1944, President Roosevelt led the nation in prayer.

‘Almighty God: Our sons, pride of our Nation, this day have set upon a mighty endeavour, a struggle to preserve our Republic, our religion, and our civilization, and to set free a suffering humanity.

‘They will need Thy blessings. For the enemy is strong. He may hurl back our forces but we shall return again and again; and we know that by Thy grace, and by the righteousness of our cause, our sons will triumph.

‘Some will never return. Embrace these, Father, and receive them, Thy heroic servants, into Thy kingdom. And, O Lord, give us Faith. Give us Faith in Thee; Faith in our sons; Faith in each other; Faith in our united crusade.

Thy will be done, Almighty God. Amen.’

The President then stood up and read excerpts of a prayer, broadcast across the United States by his predecessor Franklin D. Roosevelt on the night of the D-Day invasion, before French President Macron rose to thank those who fought to liberate his country from Hitler’s grip.

It said: ‘Almighty God: Our sons, pride of our nation, this day have set upon a mighty endeavour.

‘A struggle to preserve our republic, our religion, and our civilisation, and to set free a suffering humanity.’

And the Queen paid the ‘resilient wartime generation’ – she called ‘my generation’ – and said: ‘Seventy-five years ago, hundreds of thousands of young soldiers, sailors and airmen left these shores in the cause of freedom.

‘Many of them would never return, and the heroism, courage and sacrifice of those who lost their lives will never be forgotten. It is with humility and pleasure, on behalf of the entire country – indeed the whole free world – that I say to you all, thank you.’

Tens of thousands of people also gathered at the Portsmouth Naval Memorial on Southsea Common for the event which marks the anniversary of the biggest amphibious invasion in military history.

75 years ago today – June 5 1944 – US General Dwight D. Eisenhower, the Supreme Allied Commander in Europe, gave the final order to invade German-occupied France with the message: ‘The eyes of the world are upon you’. 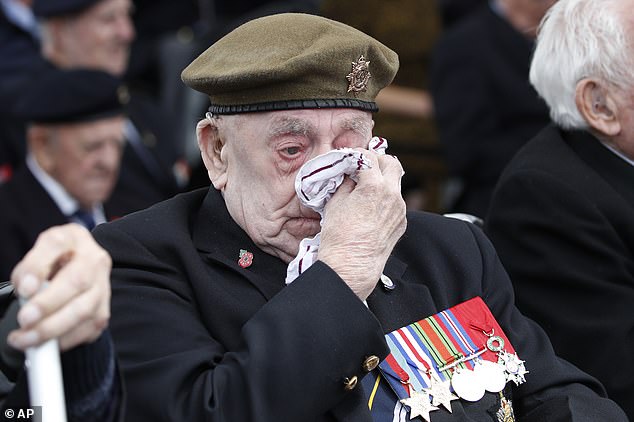 Sorrow: A veteran wiped his eyes during the ceremony to mark the 75th anniversary of D-Day 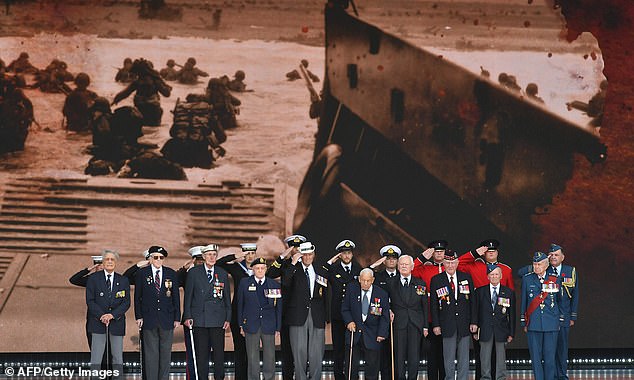 Remembering the fallen: Veterans who survived D-Day were guests of honour at the commemorations in Portsmouth attended by world leaders