While hooked up to a lie detector for a ‘Vanity Fair’ segment, Shawn Mendes dished on Justin Bieber and Hailey Baldwin, among other amusing topics.

Shawn Mendes was put on the hot seat for Vanity Fair’s infamous lie detector test on Monday. The Canadian singer, 23, nervously laughed through a series of questions while hooked up to a lie detector, dishing about girlfriend Camila Cabello, his pal Taylor Swift’s boyfriend Joe Alwyn, and, more notably, his idol Justin Bieber and his wife Hailey Baldwin, whom he infamously attended the Met Gala with in 2018.

“When you met Justin Bieber, did the Met Gala get brought up?” the interviewer asked, placing a photo of Shawn and Hailey at the gala on the table. “When we met? No,” Shawn replied. “Never talked about that.” The question came after Shawn answered other questions about his “Monster” collaborator, including whether he was nervous meeting the pop star since he has credited him as one of the main reasons he got into singing.

“Definitely,” Shawn responded, adding that he “probably had some face twitching” going on due to how nervous he was to meet Justin. “Did you say anything weird to him?” the interviewer asked, to which he replied, “Probably.” For context, Shawn and Hailey briefly dated between 2017 and early 2018 prior to the model’s nuptials to Justin in late 2018. As for Shawn, he has been dating Camila since 2019. 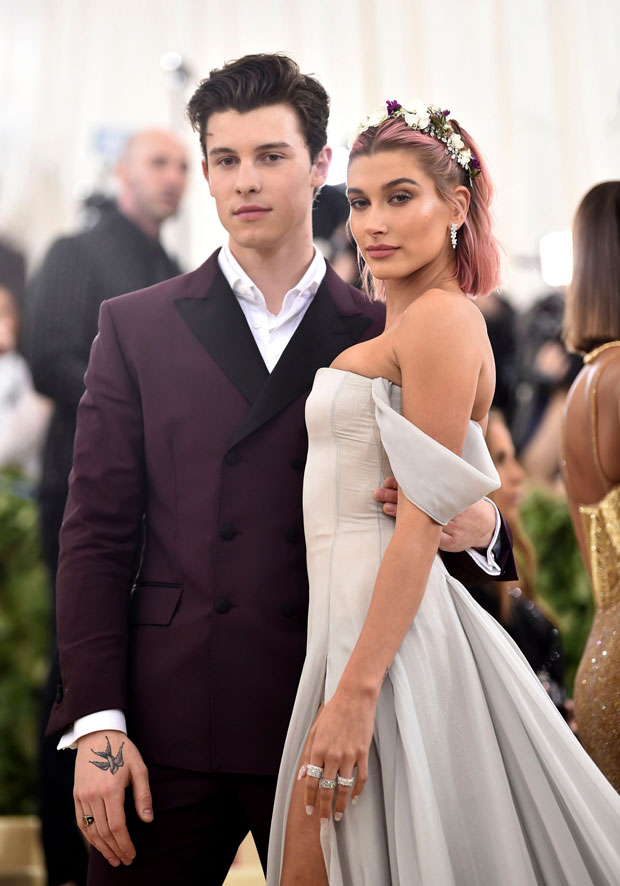 Elsewhere in the segment, Shawn said he had initially been “friend zoned” by girlfriend Camila. He also dished on whether he approved of friend and former tourmate Taylor’s boyfriend Joe. “I’ve never personally met Joe, but he looks like a sweet guy,” Shawn said. When the man monitoring the test said the singer was lying, Shawn admitted, “I mean he’s kinda got a little bit of a villain look about him. I mean, he looks like a nice guy . . . but he at any [moment] could turn into a villain, you know?”

The singer added that the British actor has “really blue eyes” and he finds it easier to “trust brown eyes.” The hilarious segment comes after the “Wonder” singer announced his upcoming tour, “Wonder: The World Tour,” pegged to his fourth studio album of the same name, on Instagram on Monday. “Announcing later this week!” he wrote of the dates. “Can’t wait to get out there and see you all again guys.” It’s unclear who will join him as opening act, but they probably won’t have blue eyes.