Revealed: Scott Disick is NOT invited to Kourtney Kardashian’s wedding to Travis Barker… as ex-couple’s three kids are seen in Portofino for big day

Family and friends of Kourtney Kardashian and Travis Barker have gathered in Portofino, Italy for their big wedding this weekend but Scott Disick is not among them.

It has been revealed that the Talentless CEO will not be in attendance for Kourtney’s special day, although their three children will be; Mason, 12, Penelope, nine, and Reign, seven.

Kourtney, 42, and Travis, 46, have selected a very special group of loved ones to witness their wedding, but an invite was not sent out to Scott, TMZ reports.

It has also been reported that the happy couple are set to have another big reception when they return home to Los Angeles, though it is unclear if Scott, 38, will be invited to that event. 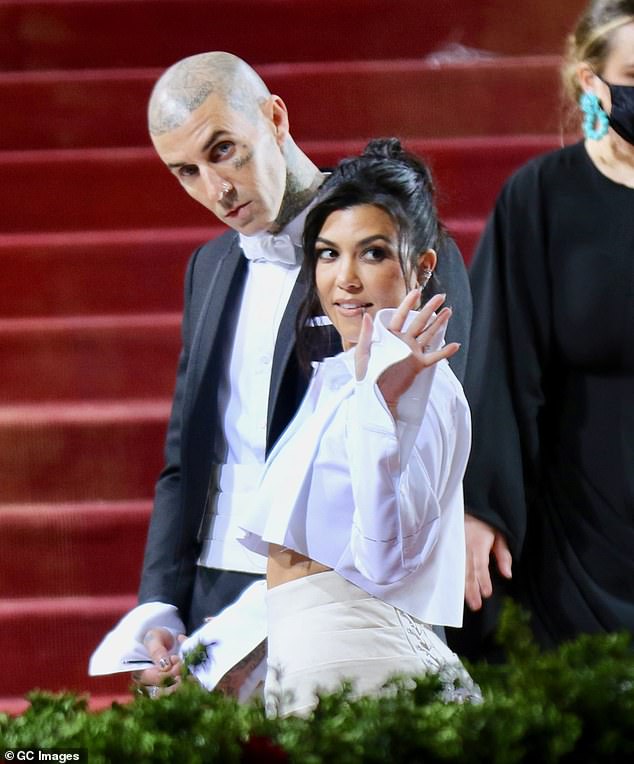 Denied: Family and friends of Kourtney Kardashian and Travis Barker have gathered in Portofino, Italy for their big wedding this weekend but Scott Disick is not among them 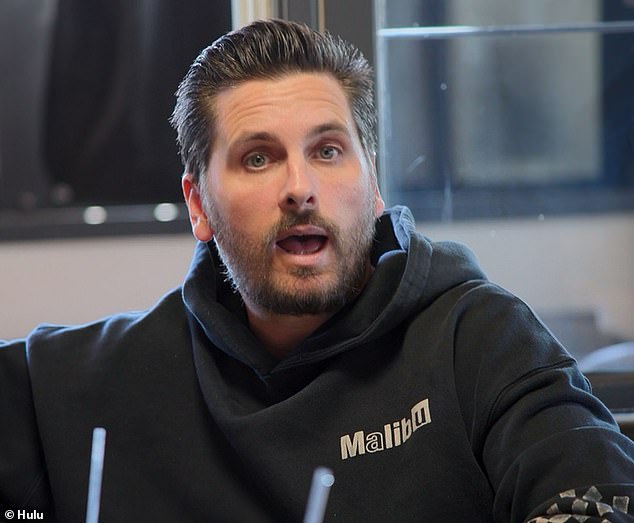 Snub: It has been revealed that the Talentless CEO will not be in attendance for Kourtney’s special day, although their three children will be; Mason, 12, Penelope, nine, and Reign, seven

The newlyweds legally tied the knot at a Santa Barbara courthouse on Sunday, but are reportedly set to marry in a lavish ceremony this weekend.

Kourtney and Travis have rented the historic house museum Castello Brown located on a hill above Portofino harbour.

Her mother Kris Jenner, 66, recently revealed that she had been ‘sworn to secrecy’ about the upcoming nuptials, as she was seen out shopping in the harbour town earlier in the day.

A source revealed to People: ‘They had to legally get married first ahead of their big Italian wedding, which is happening very soon. 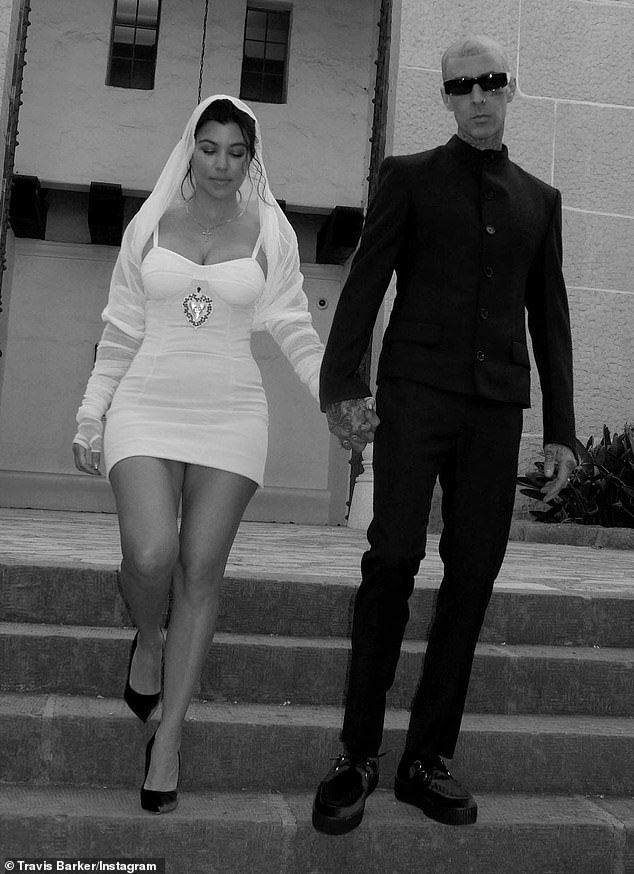 I do: The pair are pictured tying the knot officially earlier this week before jetting to Italy

‘All the details are set, and the whole family, including all the kids, are very excited.’

With Kris telling the publication: ‘I have been sworn to secrecy. If I say one thing about a wedding, I am going to be in so much trouble!’

The couple and their children are believed to have been in the area for the past few days and were spotted earlier this week boarding a tender together.

Kourtney was wearing a black semi-sheer cover-up over a black bikini, styled with oversized sunglasses and a small black Balenciaga bag.

Kris was also spotted in Portofino ahead of the rumoured Italian wedding on Friday. 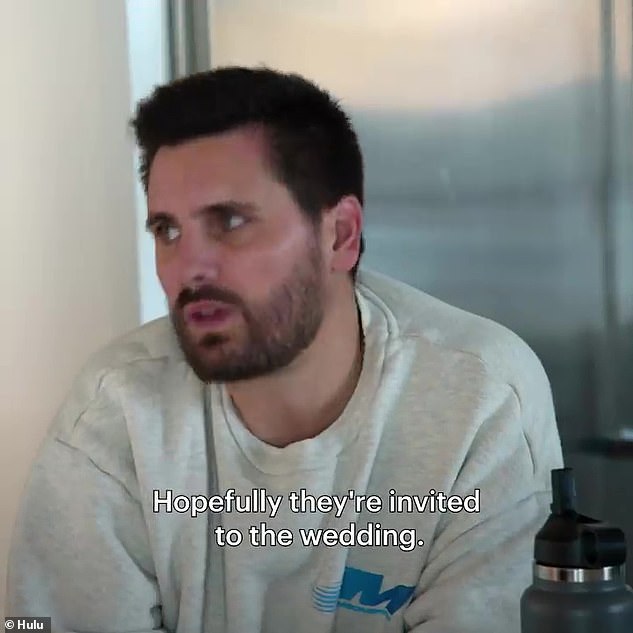 Drama: Scott had previously shown concern over whether their kids would be invited to Travis and Kourtney’s wedding 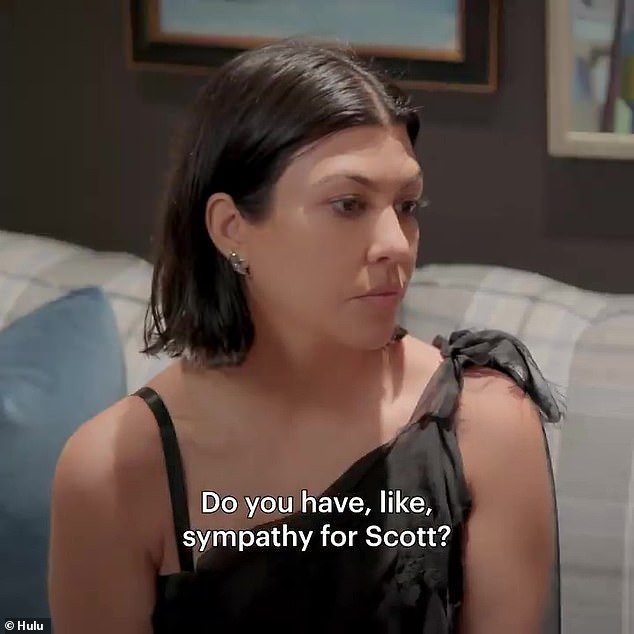 Over it: In the new season of the show it seems Kourtney has well and truly moved on from her past relationship with Scott

As well as Kris, Kourtney’s sisters, Khloe and Kim Kardashian and Kylie and Kendall Jenner, Kris’ partner Corey Gamble, and her three children will be in attendance.

But her former partner Scott Disick – with whom she has Mason, Penelope, and Reign – has not been invited. On Travis’ side, his son Landon, 18, and daughter Alabama, 16, will be there, as will his bandmates.

It is believed that Kourtney’s maternal grandmother Mary Jo ‘MJ’ Campbell and Travis’ dad, Randy, are not able to travel abroad for the ceremony, but were present at their legal courthouse nuptials. 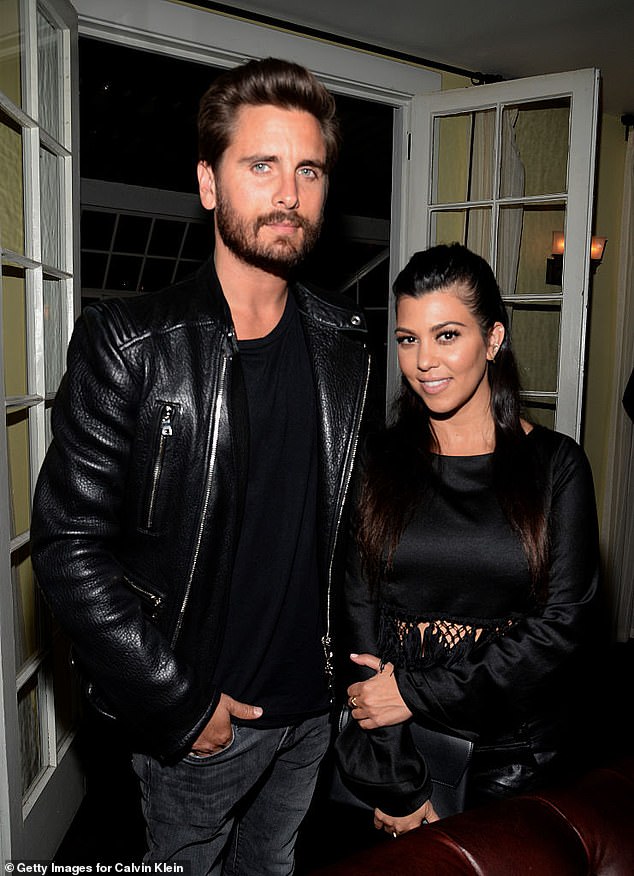 Missed his chance: Despite having three children together and being on and off for years, Scott and Kourtney never married

Kourtney and Travis have reportedly rented out the entire castle, which was built during Roman times as a military defence, and will be celebrating their nuptials over the next four days.

And that is not all as they are also planning another huge reception for their friends back in Los Angeles ‘in the near future’.

The lavish European wedding will be the third time the loved-up couple have tied the knot, following their unofficial nuptials after the Grammys in Las Vegas and their legal ceremony in Santa Barbra.

Kourtney Kardashian and Travis Barker made headlines on Sunday by announcing their engagement, just 10 months after starting dating.

The 42-year-old Kardashian and 45-year-old Barker started dating in January 2021, with the Blink-182 drummer popping the question at a beachside hotel in Montecito on Sunday.

While Kardashian has been involved in a number of relationships, this is her first engagement, as we explore all of her previous relationships. 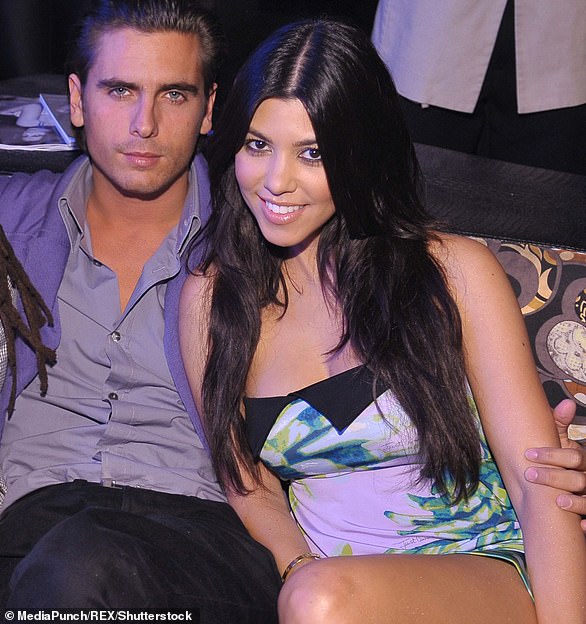 Kourt and Scott: Scott Disick and Kourtney Kardashian in an undated photo

The couple dated on and off for roughly a decade, between 2005 and 2015 before they ultimately broke it off for good.

While they never were engaged, Disick and Kardashian planned to get married in Las Vegas in 2007, during the first season of Keeping Up With the Kardashians, but her mother Kris Jenner convinced her to wait. 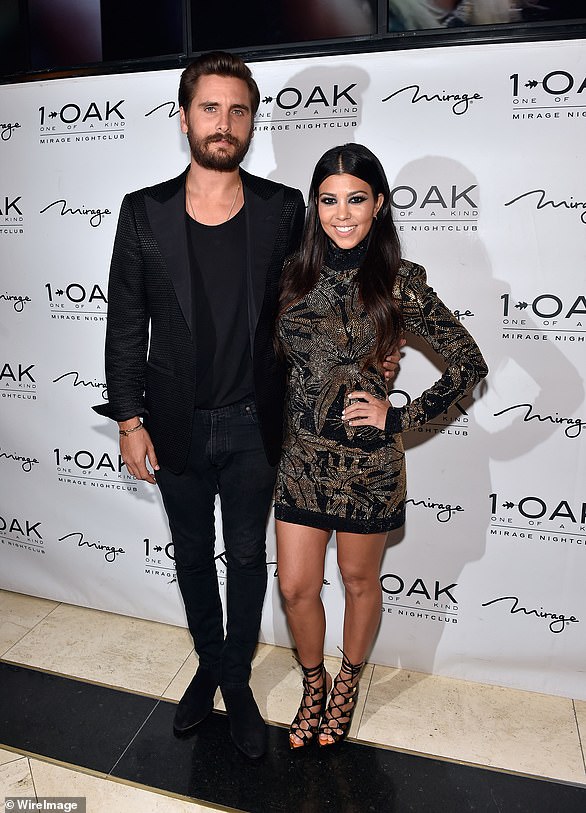 Disick also planned on engaging to Kourtney in 2011, during the season finale of Kourtney and Kim Take New York.

He had purchased an engagement ring but when he asked her what she thought about marriage, she said, ‘If things are so good now…why would we want to change that?’ so he didn’t propose. 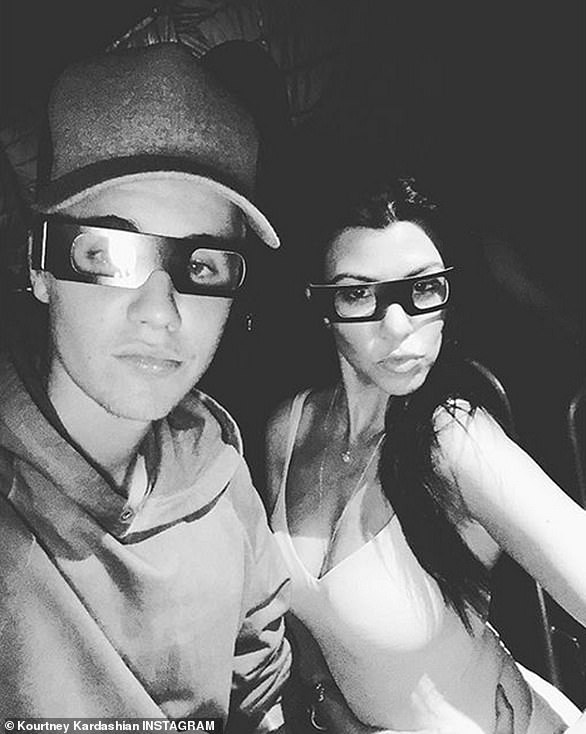 Hook-up: It was reported back in December 2015 that Kardashian had started hooking up with Justin Bieber

It was reported back in December 2015 that Kardashian had started hooking up with Justin Bieber.

The duo was first spotted out in December 2015 at West Hollywood hotspot The Nice Guy.

Still sources claimed that despite the hook-up rumors, they were just good friends with a source stating, ‘Kourtney wouldn’t go there.’ 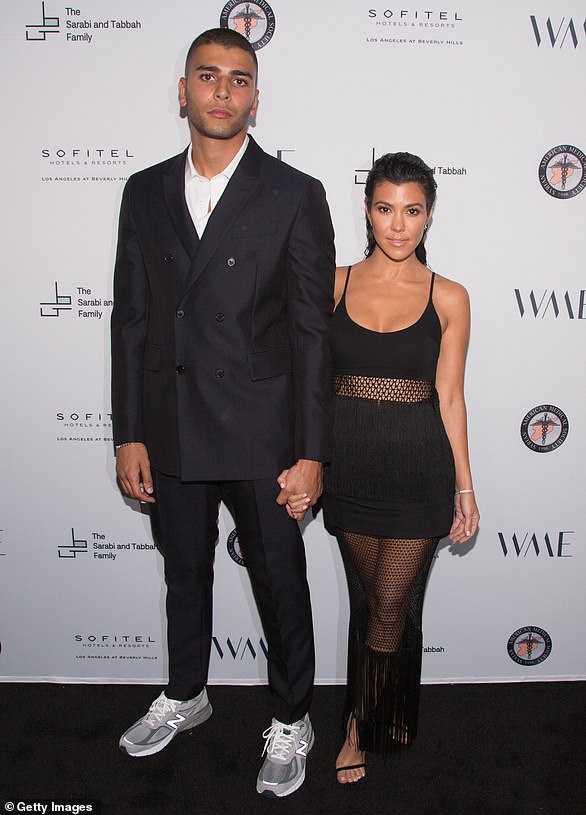 Kourtney met model Younes Bendjima at Paris Fashion Week back in October 2016 and they started dating on and off for roughly two years.

Rumors of a rift between the couple started in July 2018 after Bendjima left a nasty comment on her Instagram page.

The couple split in August 2018, with Bendjima spotted with Jordan Ozuna in Mexico shortly after the split. 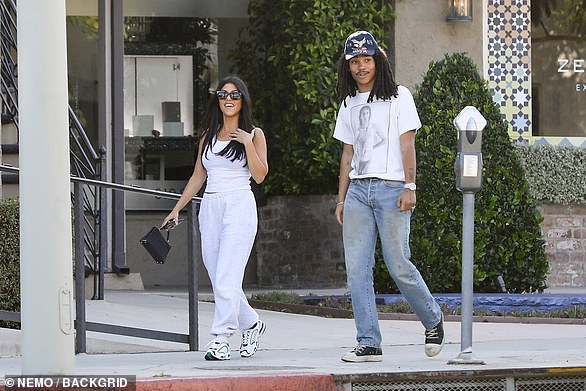 Luka and Kourtney: Kardashian was first spotted having dinner with the then-20-year-old Sabbat in September 2018, sparking romance rumors

Kardashian was first spotted having dinner with the then-20-year-old Sabbat in September 2018, sparking romance rumors.

While they were said to be ‘inseparable,’ other sources claimed they were just friends, and there was no romance afoot.

Sabbat is apparently, ‘a friend of the entire family,’ with a source adding the romance rumors, ‘doesn’t even matter’  and that ‘it’s [his] life.’ 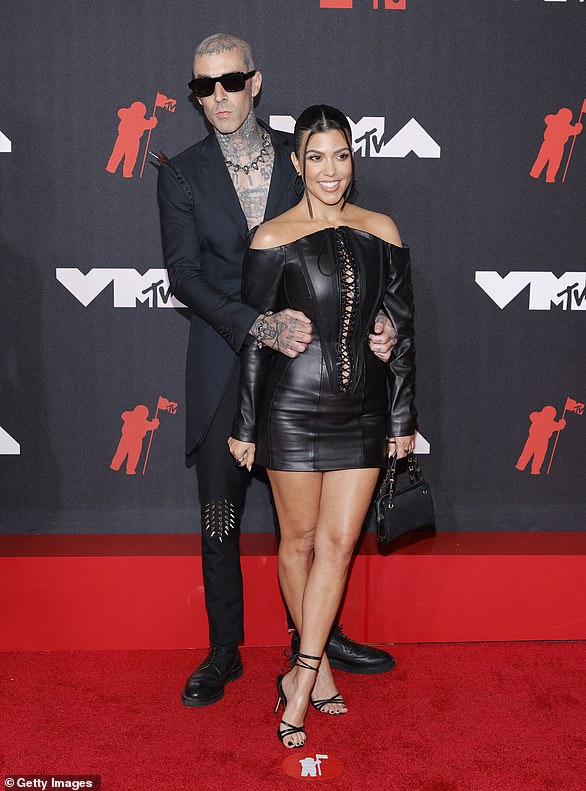 Friends: While they have been friends for years, Kardashian and Blink-182 drummer Travis Barker reportedly started dating in late 2020, which was confirmed in January 2021

While they have been friends for years, Kardashian and Blink-182 drummer Travis Barker reportedly started dating in late 2020, which was confirmed in January 2021.

The couple progressed fairly quickly with Travis recently hinting that ‘forever’ was not long enough to spend with Kourtney.

He took her to a beachside hotel in Montecito on Sunday where he had an elaborate floral arrangement shaped like a heart waiting.

The couple have not stated yet when they may walk down the aisle quite yet. 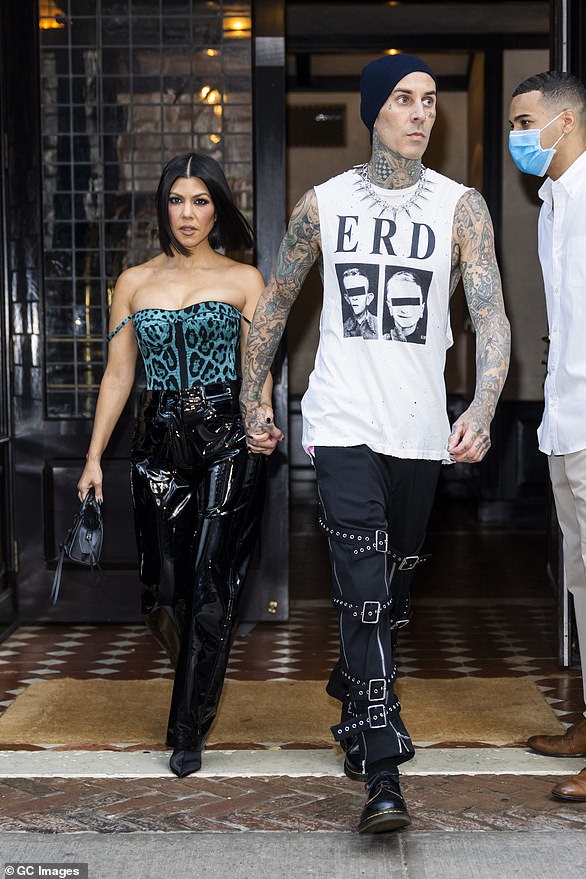 Beachside: He took her to a beachside hotel in Montecito on Sunday where he had an elaborate floral arrangement shaped like a heart waiting