Amelia Hamlin, 19, goes bra free in a crop top while holding hands with Scott Disick, 38, as they leave Kourtney and Travis’ favorite sushi restaurant in Malibu

Scott Disick, 38, and Amelia Hamlin, 19, were seen holding hands after a dinner date in Malibu on Tuesday.

The lovebirds were dining at upscale Japanese restaurant Nobu, which his ex Kourtney Kardashian, 42, often frequents with her new rocker beau Travis Barker, 45.

This sighting comes just days before the stunning model daughter of Lisa Rinna and Harry Hamlin is set to say goodbye to her teen years as she turns 20-years-old. 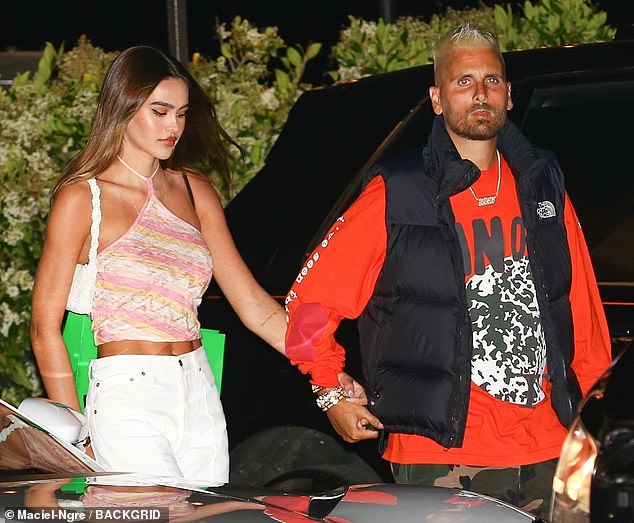 Going strong: Scott Disick and Amelia Hamlin were seen holding hands after a dinner date in Malibu on Tuesday

Amelia, whose birthday falls on June 13, looked lovely as she went bra-free in a pink and yellow halter top that made the most of her frame while flashing her toned tummy. She added white jeans and a white mini purse.

The Calvin Klein model wore her dark stick straight and down over her shoulders as she carried a green shopping bag from Bottega Veneta.

Scott was sporting an edgier look than usual as he had on a North Face vest over a red print shirt with camp slacks and a bulky silver watch. 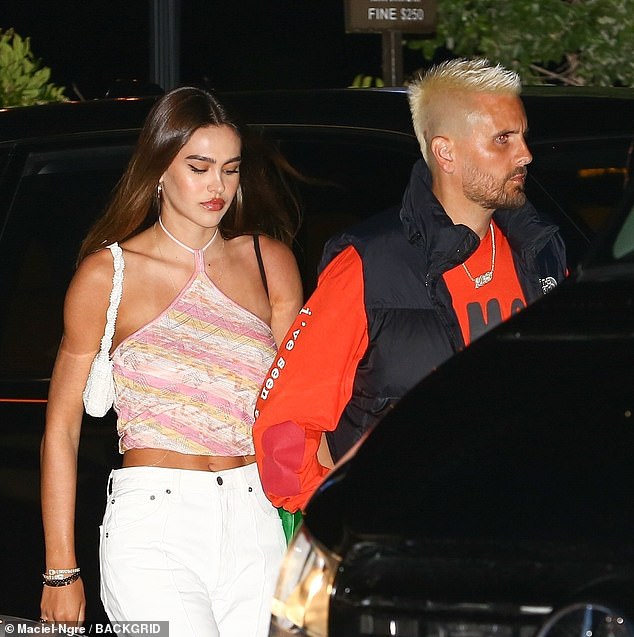 The best sushi on the shore: The lovebirds were dining at upscale Japanese restaurant Nobu 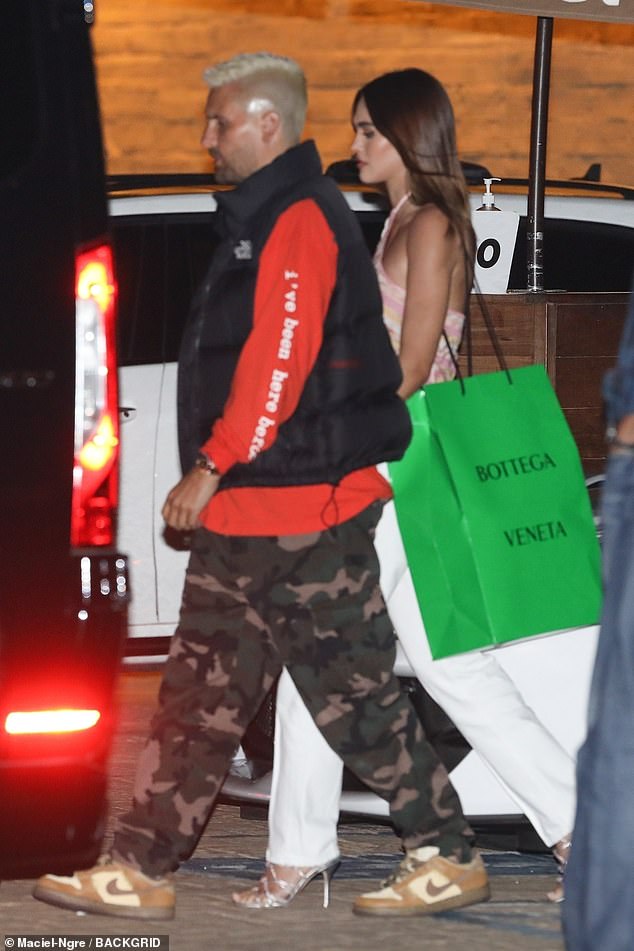 A gift from Scott? Amelia, whose birthday falls on June 13, looked lovely as she went bra-free in a pink and yellow halter top as she carried a green shopping bag from Bottega Veneta

The power couple were seen at the seaside venue as recently as last month.

On this season of Keeping Up With The Kardashians, Kourtney has made it clear she does not want to get back together with Scott even though they have three children together – Mason, 11, Penelope, eight, and Reign, six.

Scott asked Kourtney to make a ‘final decision’ about their relationship so he could finally ‘move on’. The episode was filmed earlier this year.

He said: ‘It’s hard. It sucks. I’m OK with you doing whatever you want, if you can just make the final decision that you and I are never going to try to be a family again. Then I could move on, and I could deal with you being with other people.’ 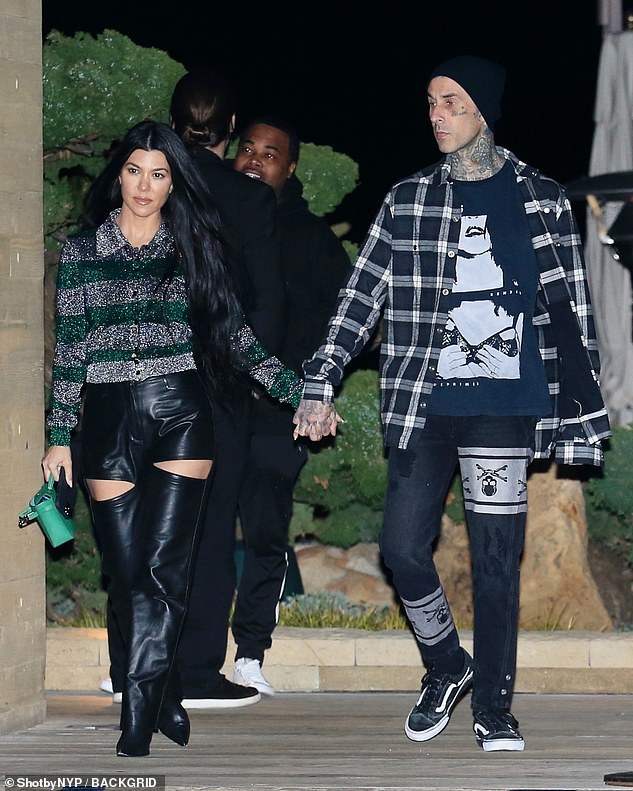 They go there too: Nobu is also where Scott’s ex  Kourtney Kardashian often dines with her new beau Travis Barker. Seen in late March

Kourtney felt a ‘lot of pressure’ as she wasn’t expecting the subject to arise while on vacation but Scott insisted he wasn’t planning to give the beauty an ‘ultimatum’, he was just tired of being left hanging.

‘But you don’t say no, and you leave this door open. So I have expectations in my mind, and they don’t seem to ever get met. And I don’t want to live in limbo for the rest of my life with you.’ 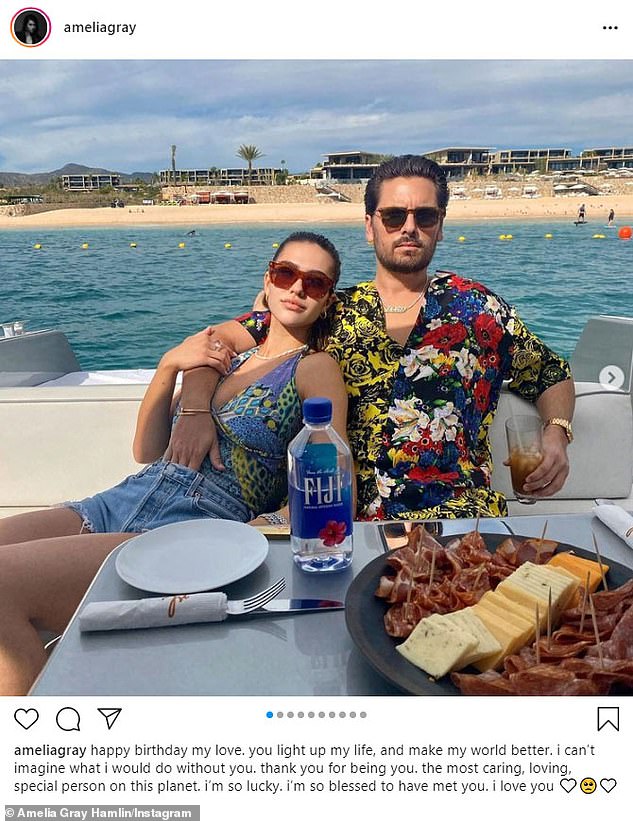 They get along well: In May Hamlin wished her boyfriend a happy 38th birthday; she is 19

Kourtney agreed: ‘I don’t want to live in limbo either. I feel like I’m happy right now.’

Scott – who used to date model Sofia Richie – replied: ‘Well, I’m not. I love you, so it’s difficult… It seems like we do everything else together but the intimacy part. That we leave for other people.

‘And then those other people just get jealous of our relationship and feel like the only thing they have is the intimacy part.’

And in a teaser for next week’s show, Kourtney is seen telling Khloe to stop ‘enabling’ Scott as she is ‘over it.’ 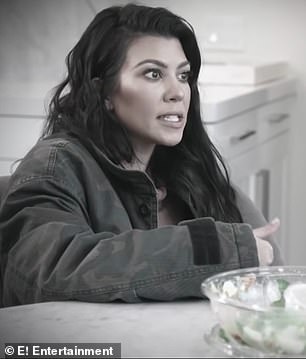 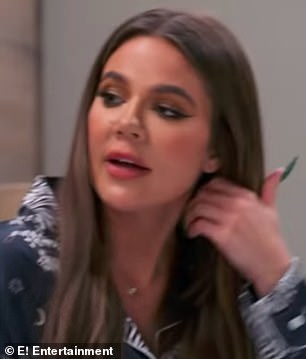 Stop please: And in a teaser for next week’s show, Kourtney is seen telling Khloe to stop making ‘excuses’ for Scott

They began dating in 2006 after meeting at Girls Gone Wild founder Joe Francis’ home in Mexico but split for good in 2015 after rumours of infidelity.

The exes are still very civil. Kardashian reunited with Disick to mark his 38th birthday in May.

The POOSH star was spotted attending her former partner’s celebrations with sisters Kim and Khloe Kardashian. Hamlin was also at the event. 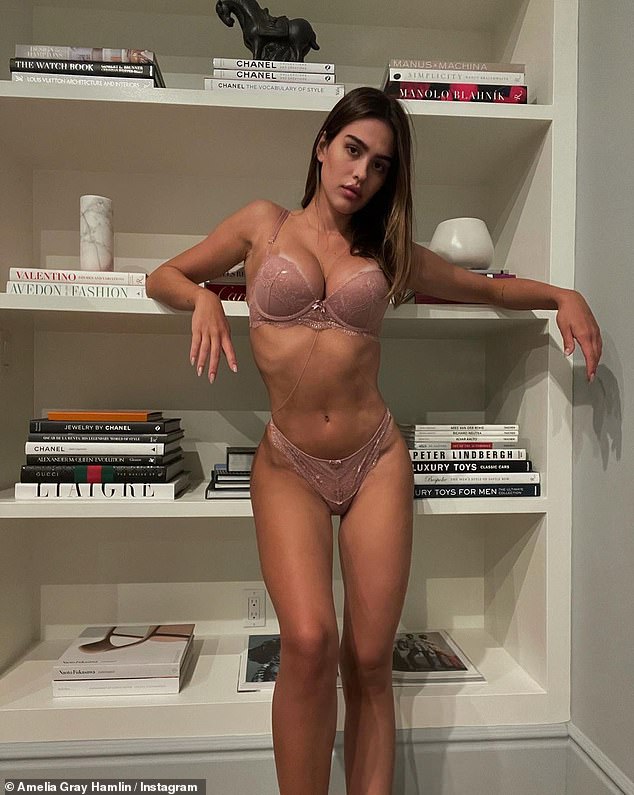 She has a look: Hamlin has excelled in her modeling career and often poses bikini shots to her Instagram page on Monday: ‘Another day another sultry set of lingerie from @bouxavenue,’ she said in her caption