We learned late last week of a terrifying shark attack in extremely shallow waters on the beach in Florida. And the latest updates actually make it a little scarier…

First off, we now know the victim’s name — though you may be hesitant to call her a victim after hearing all this. In any case, her name is Addison Bethea, and she’s actually 17 years old, not 15 as was originally reported by various outlets.

She was scalloping when the attack occurred last Thursday. She and her brother Rhett Willingham were on Keaton Beach in just about 5 feet of water when something brushed up against her leg. That something was a 9-foot shark, and for some reason it picked her out as its prey.

Thankfully, the cheerleader was equipped to handle this kind of thing. Her mother, Michelle Bethea, spoke to The Sun on Tuesday, revealing:

“Oddly Addison’s always watched shows about sharks and when you grow up on the water — this is always something you always discuss.”

Michelle explained that Addison and her three brothers have been scalloping since they were small children who had just learned to swim. So they had even prepared for possible shark attack:

“She did try to do everything right — like hitting the shark on the nose. Addison tried to pry the shark off of her own finger and that’s an instinct that you can’t give advice on – that’s a survival instinct.”

Speaking of doing things right, she was “buddy swimming with her brother” — who happened to be an EMT and firefighter. After he was able to help Addison fight off the shark, he and some nearby boaters were able to get a makeshift tourniquet on the teen’s leg. The siblings’ tenacity and knowhow probably saved Addison’s life. 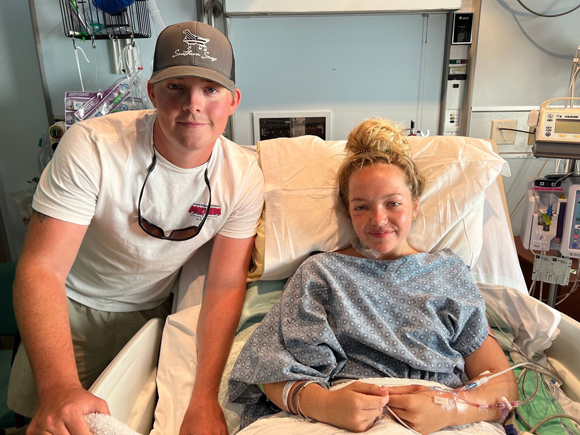 But even with all that going for them, even doing everything right, they still almost lost her. And she will lose her leg. Addison lost a lot of the quadriceps in her right leg and suffered massive nerve and vascular damage. The leg is being amputated just above the knee in a lengthy surgery at Tallahassee Memorial HealthCare on Wednesday. This will be her third surgery. But she is “tough and strong” and they’re feeling optimistic.

Michelle admitted despite their positivity, the family is facing some trouble. They’re bracing themselves for “quite a few medical costs as Addison will require prosthetics in the near future.” She explained:

“Our concern is that Addison has the best mobility going forward and this is what’s going to give her the most normal life. That’s why we’ve gone this route.”

To that end, they’re raising funds through a GoFundMe. You can find out more on their Facebook page, Fight Like Addison HERE.

Sending all the positive thoughts to Addison!