Here comes the groom! Britney Spears’ fiance Sam Asghari squeezes in a last-minute workout ahead of their highly-anticipated nuptials

He’s about to tie the knot with Britney Spears today.

But Sam Asghari squeezed in a last-minute workout before walking down the aisle.

The star, 28, was spotted exercising at Equinox in Los Angeles on Thursday ahead of his highly-anticipated nuptials to the singer. 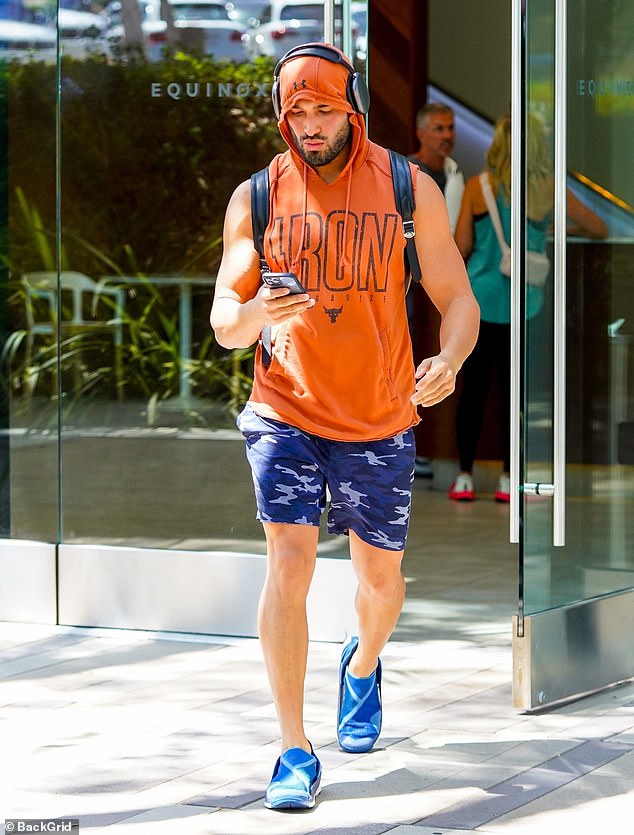 Here comes the groom! Sam Asghari squeezed in a last-minute workout before his wedding to Britney Spears on Thursday

The star appeared cool, calm and in good spirits as he arrived to the gym in his casual yet stylish sporty apparel.

Sam put his sculpted physique on full display as he hit the gym in a sleeveless orange hoodie and blue camouflage print shorts.

He propped a pair of headphones over his hoodie as he strutted out of the building, his attention glued to his phone.

The star rocked a pair of bright blue sneakers and a leather backpack over his sculpted shoulders.

Sporty: He propped on his headphones over his hoodie as he glanced down at the phone

It won’t be much longer until Sam is officially off the market.

TMZ insiders claim around 100 people will be attending the nuptials, including Britney’s brother Bryan.

However, Britney’s mother Lynne Spears, father Jamie Spears, and sister Jamie Lynn Spears will not be attending the event. 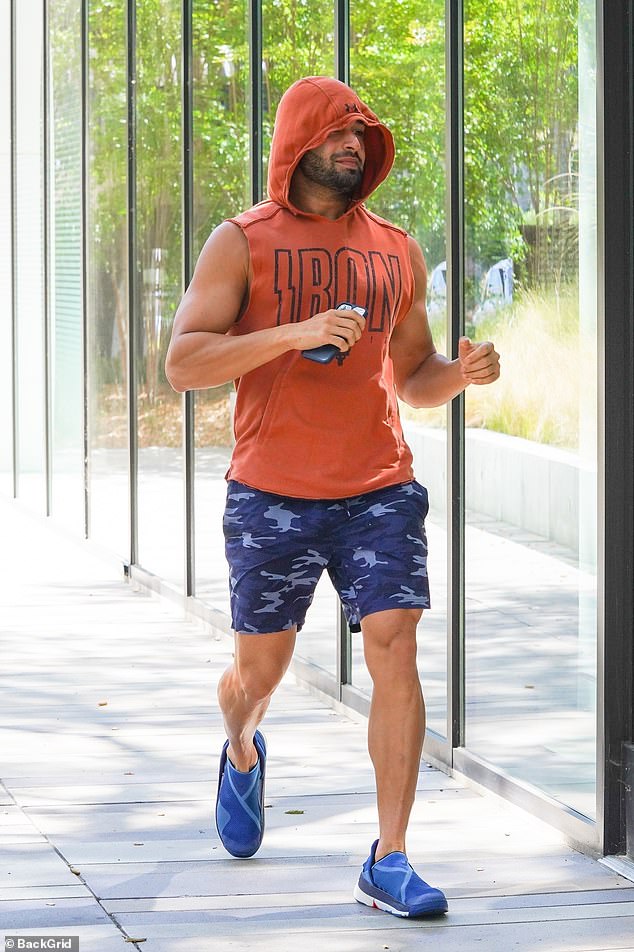 Putting in the leg work! Asghari broke in a workout ahead of his big wedding 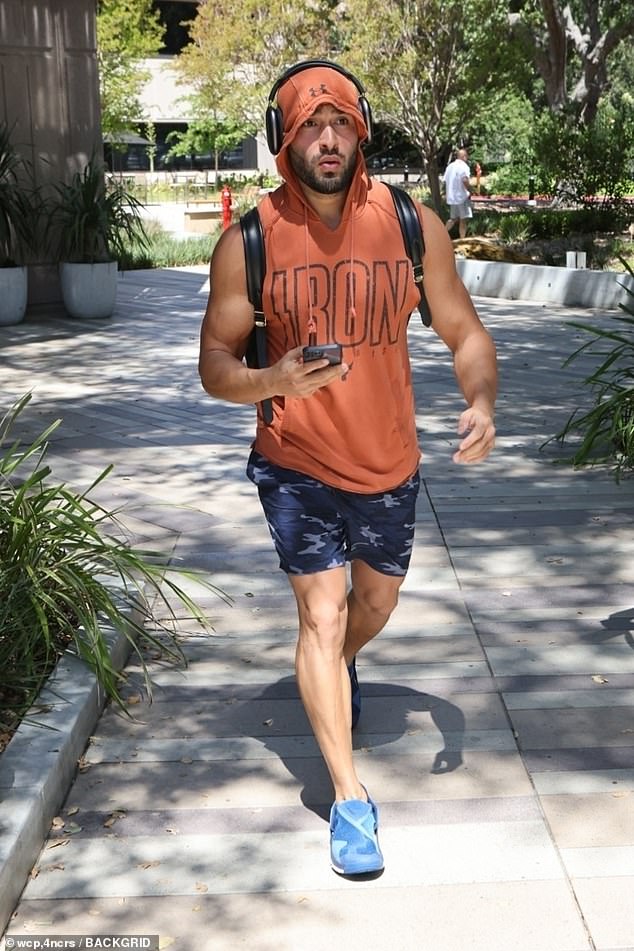 Casual cool: The star rocked a pair of bright blue sneakers and a leather backpack over his sculpted shoulders

Her sons Sean Preston and Jayden James Federline, whom she shares with ex-husband Kevin Federline, will also not be attending the wedding, according to TMZ.

Wedding preparations are currently underway for Britney and Sam’s wedding, as the couple prepares to say their ‘I dos’ in an ‘intimate’ Los Angeles ceremony reportedly set to take place today. 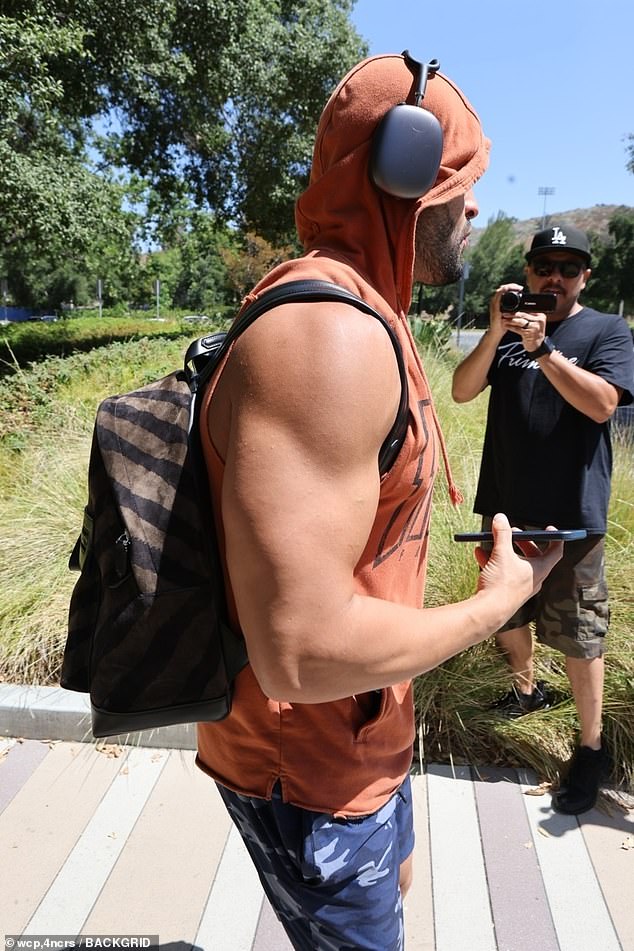 It appears that the wedding will take place at Britney’s 12,464-square-foot, five-bedroom, eight-bath Italian villa – which is located in a gated community in Thousand Oaks, California. Britney purchased the home, which sits on 20 acres of land, in October 2015 for $7.4 million.

Insiders told TMZ on Wednesday it is still unknown who will give Spears away at the altar.

The singer has yet to reveal any details on her wedding dress, but she was spotted meeting with Donatella Versace back in March, so its possible that she will be wearing a gown from the acclaimed Italian designer.

Sam and Britney got engaged back in September 2021 after five years of dating. At the time the pop star revealed the happy news via Instagram, sharing a smiling video of her flashing her custom four-carat Forever Diamonds NY engagement ring while her husband-to-be peeked in from the side. 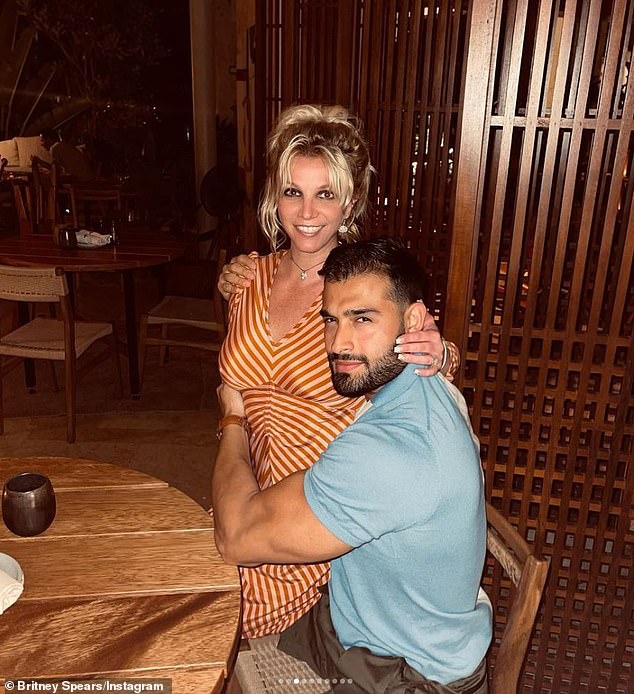 Forever and ever: Wedding preparations are currently underway for Britney and Sam’s wedding, as the couple prepares to say their ‘I dos’ in an ‘intimate’ Los Angeles ceremony reportedly set to take place today